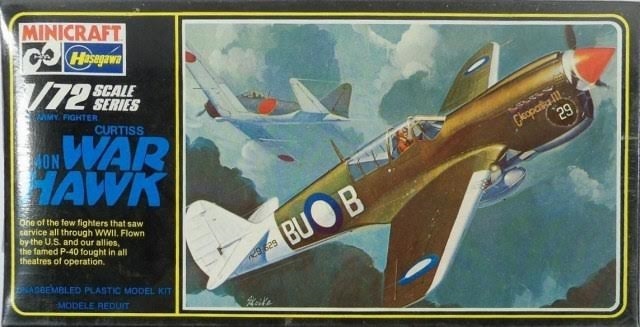 The Curtiss P-40 Warhawk is an American single-engined, single-seat, all-metal fighter and ground-attack aircraft that first flew in 1938. The P-40 design was a modification of the previous Curtiss P-36 Hawk which reduced development time and enabled a rapid entry into production and operational service. The Warhawk was used by most Allied powers during World War II, and remained in front line service until the end of the war.

It was the third most-produced American fighter, after theP-51 and P-47; by November 1944, when production of the P-40 ceased, 13,738 had been built, all at Curtiss-Wright Corperation's main production facilities at Buffalo, New York.

P-40s first saw combat with the British Commonwealth squadrons of the Desert Air Force in the Middle East and North African campaigns, during June 1941. No. 12 Squadron Royal Air Force, was among the first to operate Tomahawks in North Africa and the unit was the first Allied military aviation unit to feature the "shark mouth" logo, copying similar markings on some Luftwaffe Messerschmitt Bf 110 twin-engine fighters.

The P-40's lack of a two-speed supercharger made it inferior to Luftwaffe fighters such as the Messerschmitt Bf 109 or the Focke-Wulf Fw 190 in high-altitude combat and it was rarely used in operations in Northwest Europe. However, between 1941 and 1944, the P-40 played a critical role with Allied air forces in three major theaters: North Africa, the Southwest Pacific, and China. It also had a significant role in the Middle East, Southeast Asia, Eastern Europe, Alaska and Italy.

The P-40's performance at high altitudes was not as important in those theaters, where it served as an air superiority fighter, bomber escort and fighter-bomber. Although it gained a postwar reputation as a mediocre design, suitable only for close air support, recent research including scrutiny of the records of individual Allied squadrons indicates that this was not the case: the P-40 performed surprisingly well as an air superiority fighter, at times suffering severe losses but also taking a very heavy toll of enemy aircraft.The P-40 offered the additional advantage of low cost, which kept it in production as a ground-attack aircraft long after it was obsolete as a fighter. In 2008, 29 P-40s were airworthy.

P-40N (manufactured 1943–44), the final production model. The P-40N featured a stretched rear fuselage to counter the torque of the larger, late-war Allison engine, and the rear deck of the cockpit behind the pilot was cut down at a moderate slant to improve rearward visibility. A great deal of work was also done to try and eliminate excess weight to improve the Warhawk's climb rate. Early N production blocks dropped a .50 in (12.7 mm) gun from each wing, bringing the total back to four; later production blocks reintroduced it after complaints from units in the field.

Supplied to Commonwealth air forces as the Kittyhawk Mk IV. A total of 553 P-40Ns were acquired by the Royal Australian Air Force, making it the variant most commonly used by the RAAF. Subvariants of the P-40N ranged widely in specialization from stripped down four-gun "hot rods" that could reach the highest top speeds of any production variant of the P-40 (up to 380 mph), to overweight types with all the extras intended for fighter-bombing or even training missions.

The 15,000th P-40 was an N model decorated with the markings of 28 nations that had employed any of Curtiss-Wright's various aircraft products, not just P-40s. "These spectacular markings gave rise to the erroneous belief that the P-40 series had been used by all 28 countries." Since the P-40N was by 1944 used mainly as a ground attack aircraft in Europe, it was nicknamed B-40 by pilots. Survivors redesignated as ZF-40N in June 1948

Hasegawa is a old prolific model company based in Shizuoka City, Japan. Minicraft was their U.S. distributor for a time based in Torrance, CA.

This kit came in a shrink-wrapped end opening type box. I am no fan of this type of box, because invariably parts of the decal sheet find their way past one of the end flaps to become lost forever. Give me a tray and lid type box any day of the week.

The box art shows a P-40N dogfighting with a Japanese Zero. It is overall OD above a grey under carraige, with a white tail and leading edges on the wings. Its spinner is red and white. It carries the fuselage code in white of BU (roundel)B and the black serial no. A29-629 under the elevators. On the nose is the yellow name "Cleopatra III" over a small white number 29.

One corner of the box art says "One of the few fighters that saw service all through WWII. Flown by the U.S. and our allies, the famed P-40 fought in all theatres of operation.

This box art is both on the top and bottom of the box.

One side panel has side profile of a P-40N that is OD over a light grey undercarraige. It has a sharkmouth nose and a black, white and yellow spinner. There is a black, white and yellow fuselage band behind the fuselage star with bars and a yellow serial no. 323029 on the rudder.
The other side panel shows 5 color box arts of other aircraft kits that Hasegawa manufactures: a 37A/B jet fighter, a P-51D, a UH-1D helecopter, a OV-10 jet fighter and a Mk. 1 Spitfire. No kit numbers are provided nor any scale mentioned. I assume the 5 are all 1/72nd scale.
​WHAT'S IN THE BOX:

This kit contains 3 dark green trees, a clear tree, the decal sheet and the instructions. Parts are all in a sealed cello bag.

The instructions consist of a single sheet that is printed on both sides in 8 1/2" x 13" page format, folded twice to fit the box.

The face side of the instructions begins with a black and white repeat of the box art, followed by the history of the P-40 and two 3-views of painting and marking schemes.

The first one is the shark mouth one. It is said here it was from the AAF Tactical Center, Orlando Field, Florida.

The second one is Cleopatra III. It is said here it was from No. 80 Squadron, RAAF, Wing Commander's Plane (G.C. Atherton).

Some colors are called out in FS numbers here.

The other side of the instruction sheet has 6 assembly steps with text to walk modelers through the builds, paint scheme for the pilot figure and a list of the names of the kit parts.
Trees are not alphabetized or illustrated in the instructions. However, they do have number tabs next to the parts on the trees. 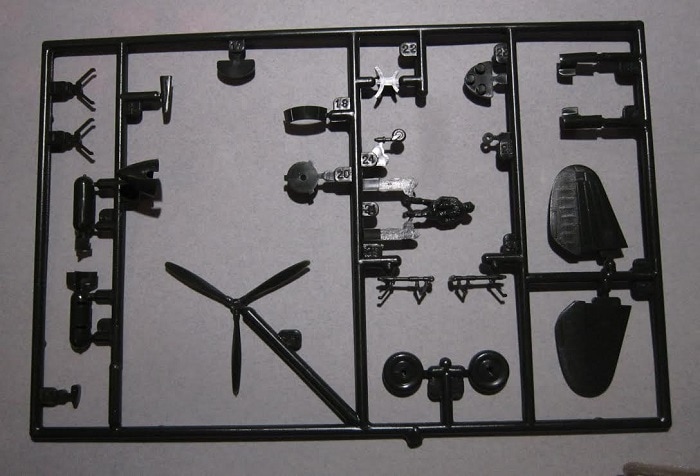 ​The 2nd dark green tree holds: the wing halves, drop tank halves and their shackles, the cockpit floor and the joy stick (9 parts) 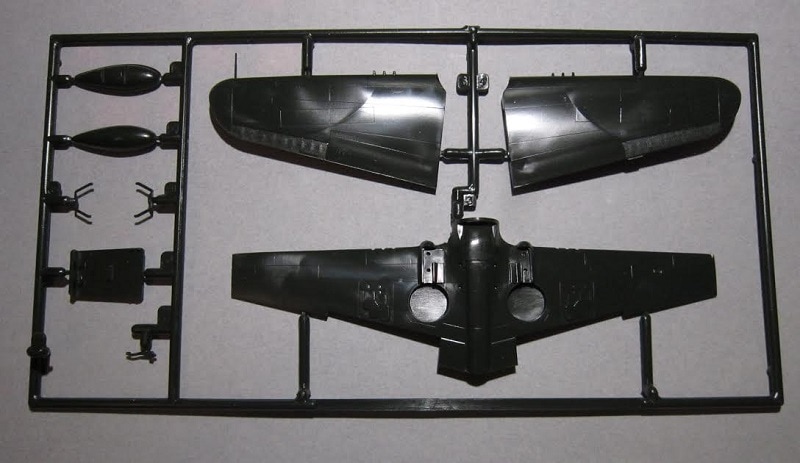 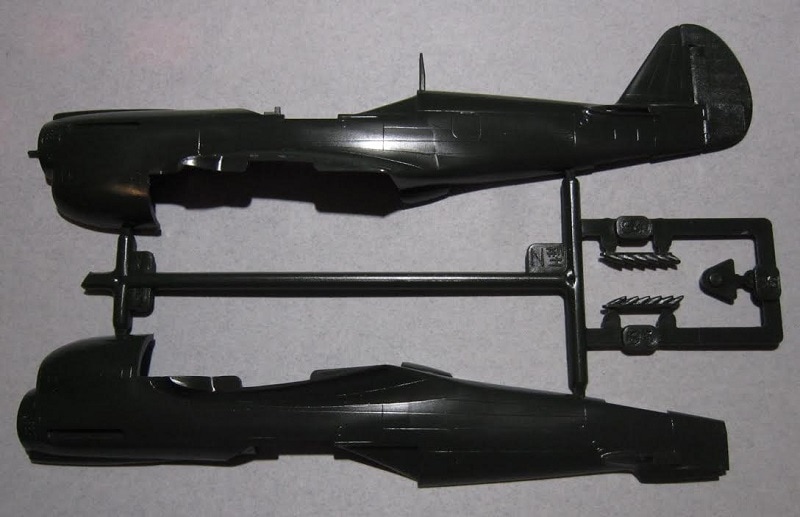 ​The clear tree holds the single cockpit canopy parts. It is molded shut.
​Control surfaces are all molded solid and panel lines are of the raised variety. 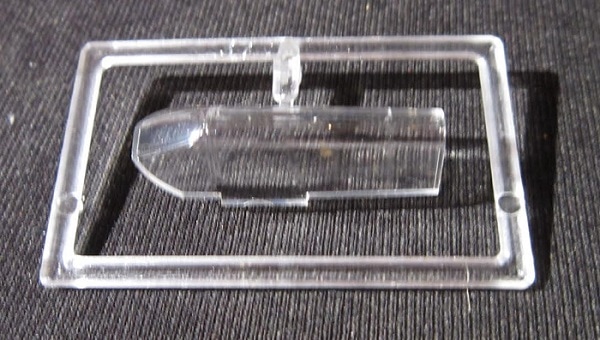 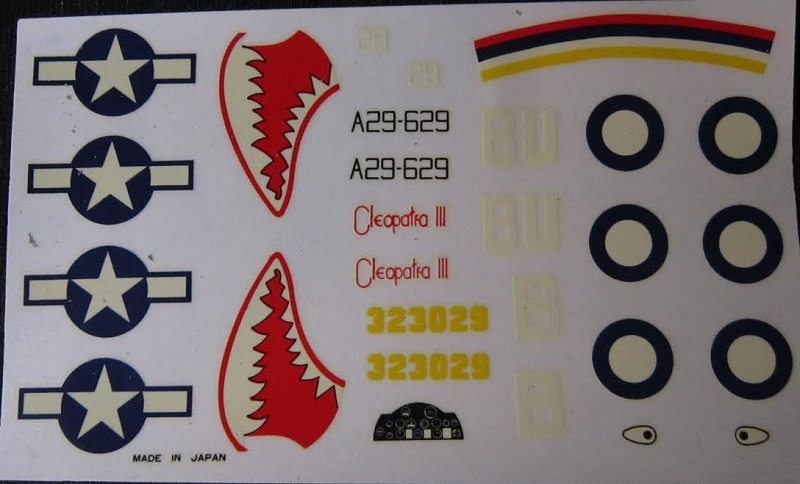 ​This is a nice older kit of the P-40N, which is a favorite aircraft type among a lot of modelers.
Recommended

I bought my kit for $1.39 at my the Toy Fair store at the mall here in town 30 years ago before they went out of business.