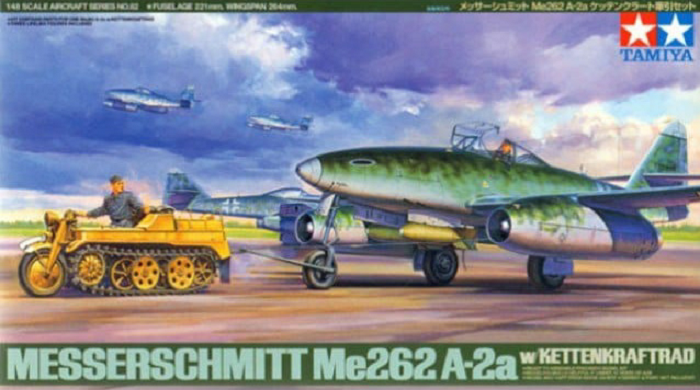 The Me-262A-2A was the first production of the first jet fighter to even enter combat. The Messerschmitt Company began developing the Me-262 in 1939. In July 1942, a prototype jet fighter employing two Jumo 004 axial flow turbojet engines made a successful test flight.

The actual Me-262 , capable of 870 km/h top speed, featured nose-housed landing gear and 18.5 degree receding wings. In April 1944, when Allied bombing raids on the German homeland were rapidly intensifying, the Luftwaffe proposed the hastened deployment of the revolutionary Me-262A-1A jet fighter/interceptor.

However, Hitler issued strict contrary orders prioritizing the development of the A-2A fighter/bomber version of the Me-262. The A-2A was equipped with only two 30 mm MK 108 guns (compared to the A1-A's four guns), but had an extra fuel tank in the rear part of the fuselage and could carry up to a 1-ton payload of bombs.

A-2A fighter/bombers flew until the end of WWII and were placed in the 51st air unit, first stationed in France, then Belgium, and eventually retreating to Germany. The typical payload of the Me-262A-2A  consisted of two 250 kg bombs, lined-up horizontally in formations of four at approx 4000 m altitude, the A-2A fighter/bombers  would launch into a 35 degree descent upon confirming target and drop their payload at approx 1000 m altitude.

Due to fuel shortages at the end of the war, the Me-262 was restricted from self-propelled ground movement when positioning for take-off. As such, the Kettenkraftrad and other ground vehicles were used to pull the Me-262 to the runway.
​THE KIT:

Tamiya is an old prolific model company based in Shizuoka, Japan. They manufacture all manner of model subjects in the popular scales.

The box art shows 2 Me-262A-2A's on a runway and 2 more flying overhead. The one in the foreground is being towed by a Kettenkraftrad. All the aircraft are in a mottle of 2 shades of green over light blue undercarriages and have a white rudder tip and nose and a skeletal white German cross.

The Kettenkraftrad is overall earth-yellow. Its driver and a mechanic in the cockpit of the 262 steering it wear blue-gray uniforms.

One side panel has a color side view illustration of the Kettenkraftrad and Me-262A-2A in the box art schemes. The 262 further shows a fuselage code of + red "B" outlined in white, followed by illustrations of a thrust rocket-assisted take-off unit and a SC250 (250 kg) bomb, followed by a 1 paragraph history of the Me-262, the copyright of the kit being 2002 and MADE IN JAPAN.

​The other side panel has a color side profile illustration of a Me-262A-2A in the box art scheme, with a white rudder tip and nose also, a skeletal white German cross followed by a white "Y" as the fuselage code. There is also a photo of the model with the gun bay opened.

​Inside the tray at the bottom is IMPORTANT INFORMATION CONCERNING THIS KIT in 14 languages, including English.
​WHAT'S IN THE KIT:

This kit contains 6 medium-gray trees, a clear tree and a white metal part in 8 sealed clear cello bags and the instructions.

The instructions consists of a single sheet that accordion-folds out into 10 pages in 7" x 11 3/4" page format.

Page 2 begins with READ BEFORE ASSEMBLY instructions in 10 languages, including English, over the first 2 assembly steps.

Page 3 through 7 gives a balance of a total of 16 assembly steps.

The bottom of page 7 has painting instructions.

Page 8 begins with decal application instructions, a 5-view showing where common markings go and a 2-view of the Me-262A-2A in the box art scheme (already described above).

Page 9 has a 6-view of the Me-262A-2A with red "B" outlined in white on the fuselage (also already described above).

The bottom of the page has a service coupon all in Japanese, with Tamiya's web address provided.

Trees are alphabetized and have number tabs next to the parts on them. However, they are not illustrated in the the instructions. 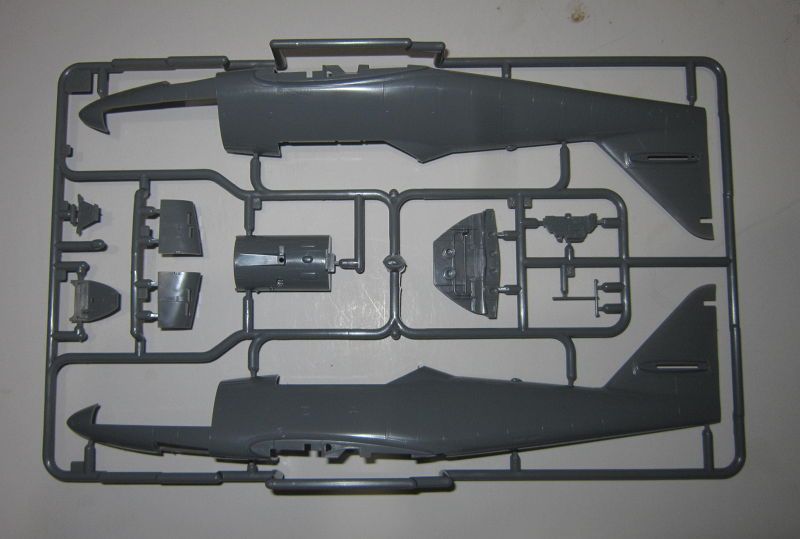 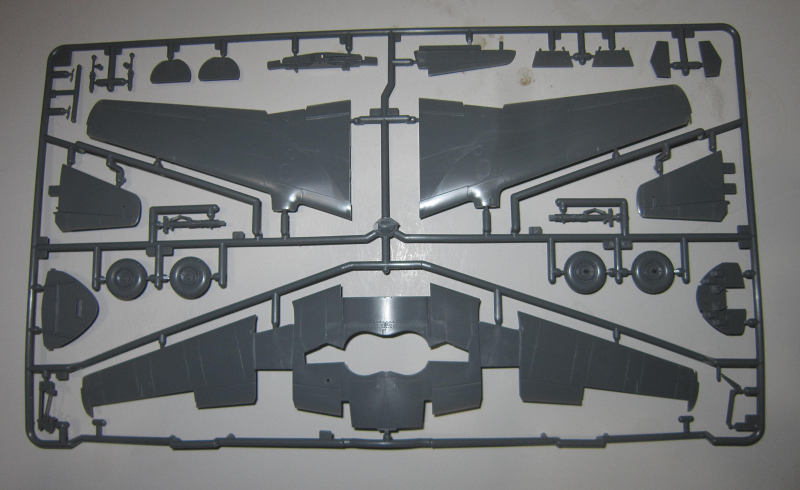 There is no letter D or E trees. 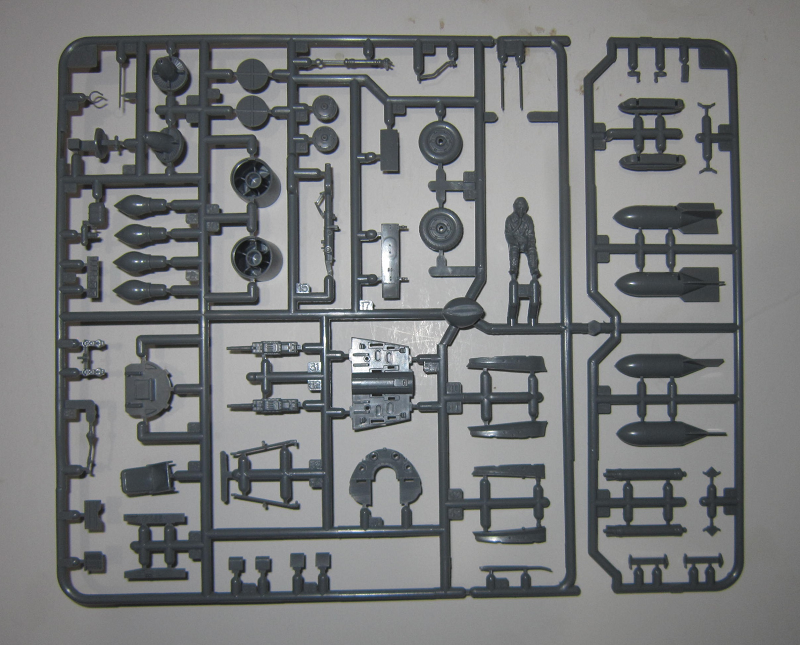 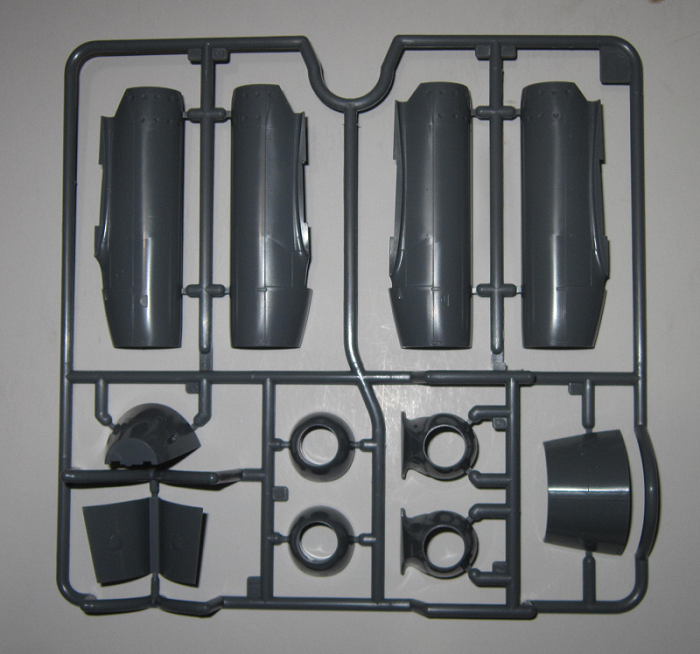 ​The clear tree is also labeled as being letter F. It holds the cockpit transparencies (7 parts) 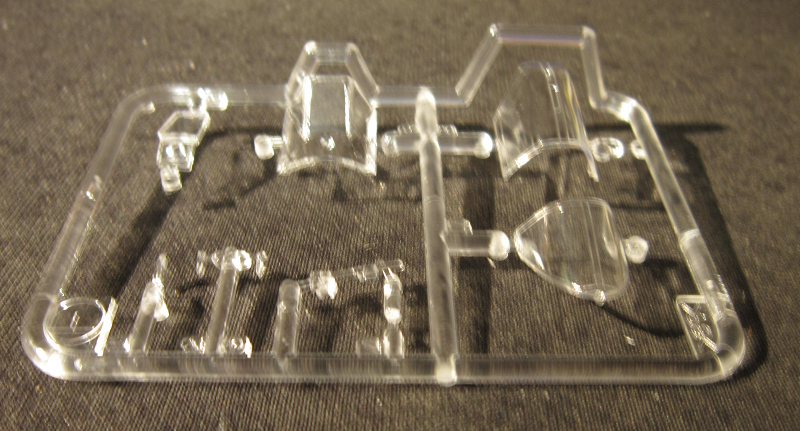 ​The white metal part serves as both the nose wheel compartment and nose weight, to keep the model from tipping on its tail. Nice addition. 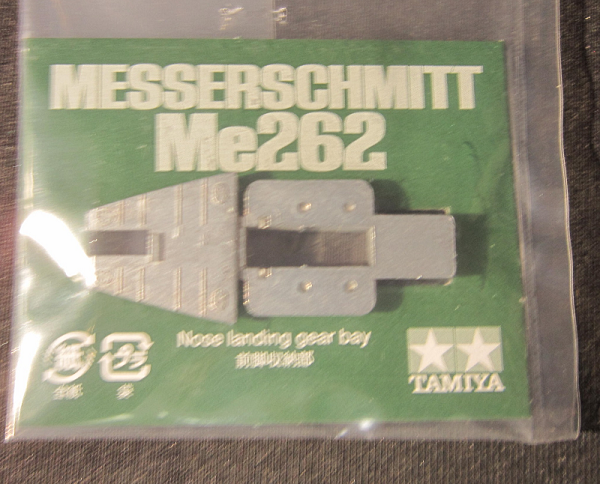 ​Either you can have the pilot or one of the ground crew figures in the cockpit or two ground crewmen in the Kettenkraftrad.