The Hawker Hurricane is a British single-seat fighter aircraft of the 1930s-1940s that was designed and predominantly built by Hawker Aircraft Ltd for the Royal Air Force (RAF). Although overshadowed by the Supermarine Spitfire, the aircraft became renowned during the Battle of Britain, accounting for 60% of the RAF's air victories in the battle, and served in all the major theatres of the Second World War.

The 1930s design evolved through several versions and adaptations, resulting in a series of aircraft which acted as fighters, bomber-interceptors, fighter-bombers (also called "Hurribombers") and ground support aircraft. Further versions known as the Sea Hurricane had modifications which enabled operation from ships. Some were converted as catapult-launched convoy escorts, known as "Hurricats". More than 14,583 Hurricanes were built by the end of 1944 (including at least 800 converted to Sea Hurricanes and some 1,400 built in Canada by Canadian Car and Foundry).

Heller is a prolific model company based in France. They manufacture all manner of model subjects in the popular scales.

The kit comes in a shrink-wrapped end opening type box. My box was flimsy and is badly crushed. I am no fan of end opening boxes, because invariably parts find their way past the end flaps to become lost forever. Give me a tray and lid type box any day of the week.

The box art show two Hurricanes attacking two Heinkel He-111's, one of which is trailing smoke from an engine and the other one is going down.

The two hurricanes are in a wave pattern of green and gey over grey undercarraige. The one in the foregound has a white fuselage band with black serial no. BE581 over it. Forward of the serial no. is large black code JX and the roundel. The second Hurricane is in the same scheme with large black code JK and the roundel. The third letter of the codes on the two aircraft is obscured by the wings. These scemes are not the ones on the decal sheet or instructions.

The bottom of the box lists 33 other aircraft kits that Heller markets. The kit was made in France.

The kit contains 4 medium grey trees of parts, a clear tree, the decal sheet, instructons and a small slip that has directions for a glue ampule that is not in the box.

The trees are not alphabetized, nor is ther any parts trees illustrations in the instructions. However, there are number tabs next to the smaller parts on the trees. 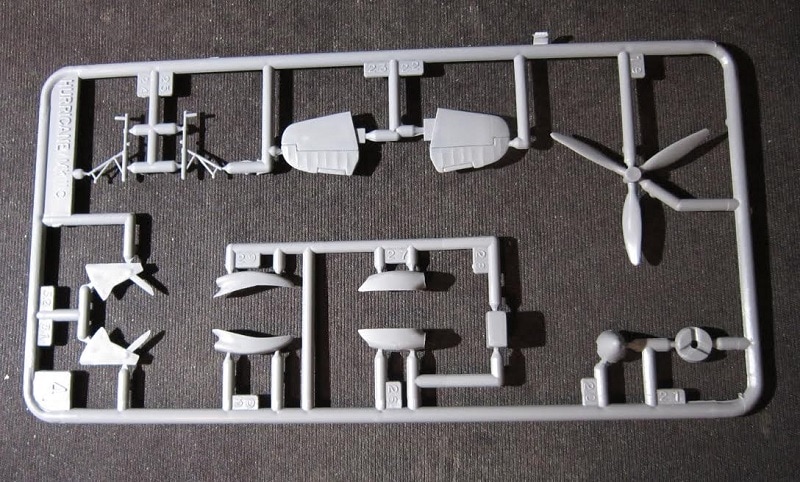 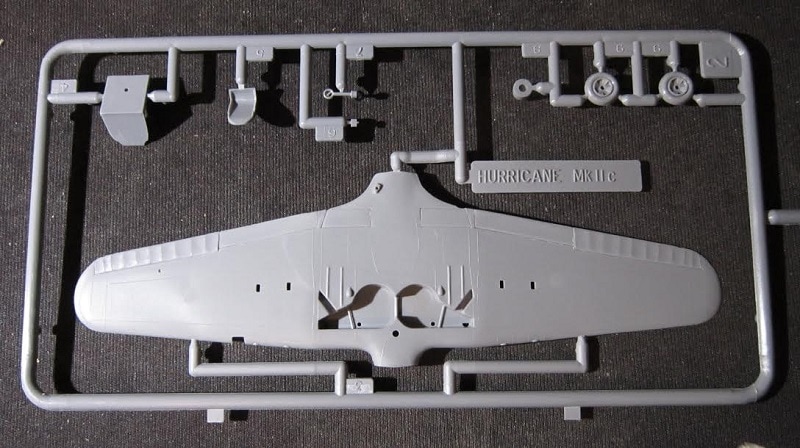 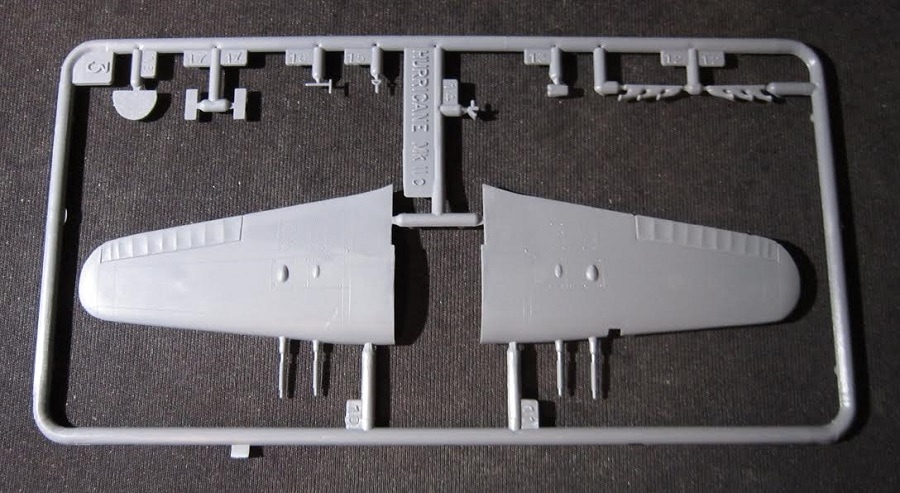 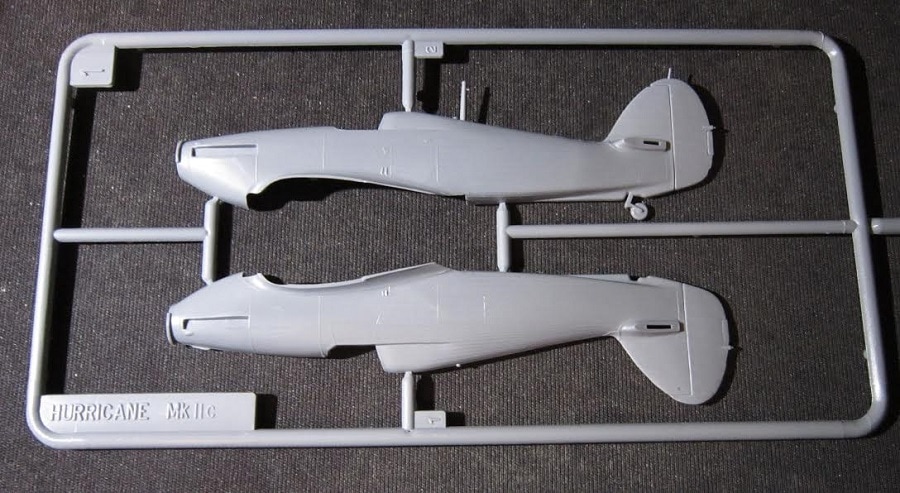 The decal sheet has a frosted sheet provided that is supposed to protect its face from scratching. However, this sheet was floating around the box and not protecting a darn thing. So, I stapled it to the decal sheet. 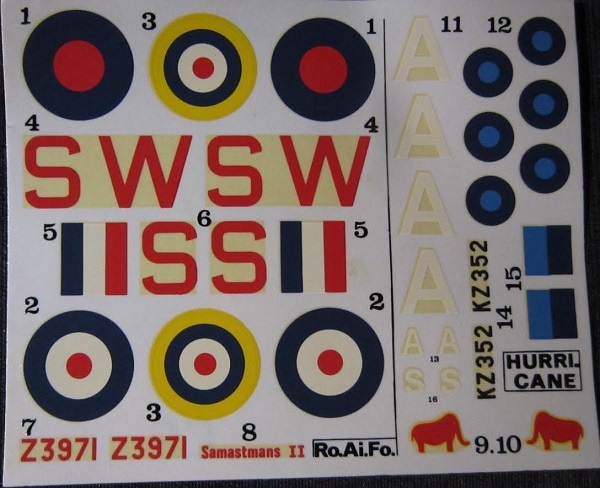 ​The instructions consist of a single sheet printed on both sides in 8 1/2" x 12" page format folded twice to fit the box.

The face side of the sheet has the history of the Hurricane, names of the kit parts, color
instructions, an customer assistance coupon and two 3-views of schemes.

1. A Hurricane in olive green and grey wave pattern above a pearl grey undercarraige. It has white bands over the tops of the wings and the tops of the elevators. The fuselage code is white A (roundel) A and the serial no, is black KZ352. One fouth of the rudder at the front is white over the fin flash. There is a logo of a red elephant on the fuselage sides below the windscreen.

This is a Hurricane with the 1st Fighter Squadron of the Indian Air force.

2. A Hurricane in the same colors with fuselage code of red SW (roundel) S and serial no. Z3971 in red.
The face side of the sheet is all in French.

The other side of the sheet repeats all the text, but not the 3-view illustrations, in English and German.

This is a nicely done kit. Control surfaces are molded solid and the panel lines are of the raised variety. The cockpit transparency can be posed open.

I bought this kit for $2.00, according the price sticker still on the box, from a hobby shop that went out of business in my town.
​I am willing to sell the kit for decent offer.