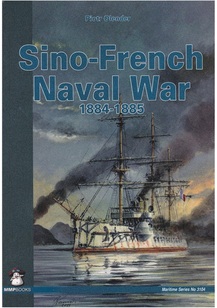 Mushroom Model Publications is based in the UK. All their books are printed in Sandomierz, Poland by their associate Stratus in the English language. Stratus also does their own books in both Polish and English. This new book was sent to me directly from Stratus, wrapped in several heavy sheets of cardboard.

In the late 19th Century, France and China fought over control of what is now Vietnam. This new book in the MMP Maritime series covers the naval battles, both at sea (especially around Taiwan) and in the extensive rivers of the disputed area, and puts these into the context of the overall conflict.

The background, military operations and outcomes are described and discussed, providing comprehensive information on this little-known colonial war.
All ships involved, both French and Chinese, are described in detail, and illustrated with full technical specifications, scale drawings, and many period photos and sketches.

All photos and sketches are in black and white. The only color is the cover art painting of the French Armoured cruiser Bayard – flagship of the French Far East Squadron.

The back cover shows color cover arts for 3 other books in MMP’s Maritime Series: Russo-Japanese Naval War 1905 volumes 1 and 2, and Austro-Hungarian Submarines in WWI.

This book will prove to be essential reading for military and naval historians and enthusiasts.

I want to thank Dr. Roger M. Wallsgrove, Editor-in-Chief of MMP and the folks at Stratus for this review copy.

Information about all MMP books can be found at their website:

The North American distributor is Casemate.

The Australian distributor is Playpus Publications