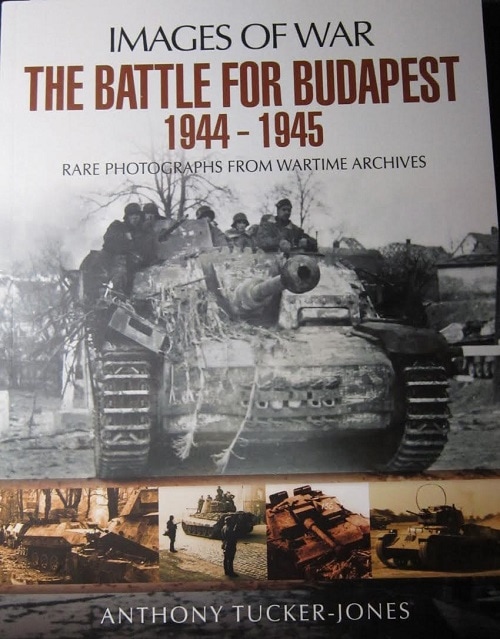 MSRP: $24.95
r​The desperate struggle between the Wehrmacht and the Red Army for Budapest in 1944 and 1945 was as lethal and destructive as any of the urban battles fought during WWII.

The losses of men and equipment sustained by the Germans were so great that they hastened the collapse of Hitler's regime. Yet what happened in Budapest is less well remembered today than other flash points in the conflict on the Eastern Front.

Anthony Tucker-Jones's photographic history is a fascinating and graphic introduction to this neglected episode in the closing months of the war.

The battle began with operation Panzerfaust in October 1944, when the Germans seized Hungarian leader Admiral Horthy to prevent his country defecting to the Soviets. Red Army advances then left German and Hungarian units trapped in the city and sparked fifty days of intense fighting.

Then, in March 1945, Hitler launched Operation Spring Awakening, the reckless final German offensive of the war, designed to recapture Budapest and stabilize the Eastern Front. It failed spectacularly, opening the road to Vienna for the Red Army.

Anthony Tucker-Jones ins a former defence intelligence officer and a widely published expert on regional conflicts, counter-terrorism and armoured warfare. He is author of over 20 books including : The Falaise, The Flawed Victory, Operation Dragoon, The Liberation of Southern France 1944, Armoured Warfare on the Eastern Front, The Kalashnikov in Combat, The Soviet-Afghan War, Tiger I & Tiger II and T-34, The Red Army's Legendary Medium Tank and The Panther - Hitler's t-34 Killer

He is security and terrorism correspondent for intersec, the Jounal of International Security and has freelanced for Channel 4 news. For futher information his webish can be found at www.atuckerjones.com.

Pen & Sword Ltd. is located in the U.K. Their books are printed and bound there also.

The cover design of the book is by Jon Wilkenson.

The front cover shows a large black and white photo head-on shot of a sturmgeschutz with a bunch of German infantrymen riding atop it.

Below this shot is four sepia-tanned photos. Of a line of wrecked German AFV'S, a Tiger tank rolling down a brick street with infantrymen riding atop it and soldiers standing beside, a wrecked sturmgeschutz and a Hungarian Toldi tank that has a large circular aerial mounted atop the turret.

The back cover has a sepia-tanned photo of a German battery of 2 howitzers manned by their crews on a snow-covered field and a side view of a German Wespe.

There are 8 chapters in the book.

There are 178 black and white shots of the battle. These show Russian, German and Hungarian AFV's, wreckage damages, individuals etc. Very comprehensive coverage.

There are no color illustrations in the book.

Pictures are very sharp and clear. Many interesting things to see for both the historian and modeler.

I want to thank the folks at Casemate who sent me this review copy.

A full listing of Pen & Sword Ltd. books can be seen on the Casemate site at:
www.casematepublishing.com