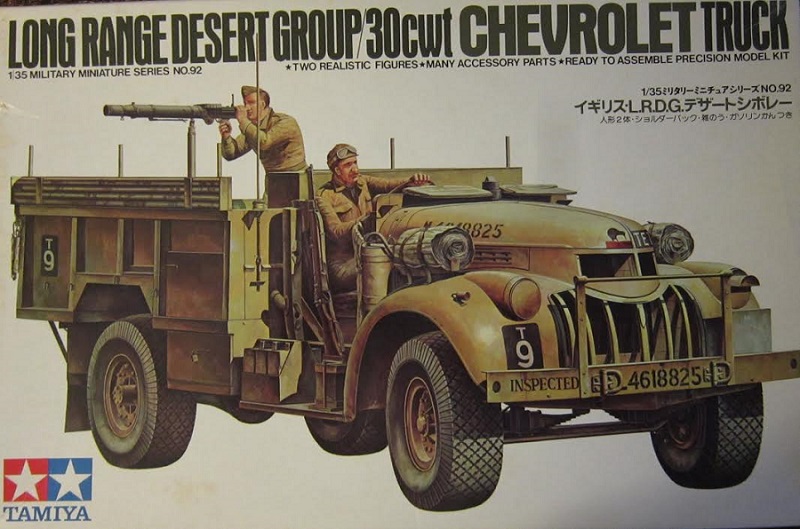 The Long Range Desert Group (LRDG) was a reconnaissance and raiding unit of the British Army during the Second World War.

Originally founded in Egypt in June 1940 by Major Ralph A. Bagnold, acting under the direction of General Archibald Wavell. Bagnold was assisted by Captain Patrick Clayton and Captain William Shaw. At first the majority of the men were from New Zealand, but they were soon joined by Southern Rhodesian and British volunteers, whereupon new sub-units were formed and the name was changed to the better-known Long Range Desert Group (LRDG). The LRDG never numbered more than 350 men, all of whom were volunteers.

The LRDG was formed specifically to carry out deep penetration, covert reconnaissance patrols and intelligence missions from behind Italian lines, although they sometimes engaged in combat operations. Because the LRDG were experts in desert navigation they were sometimes assigned to guide other units, including the Special Air Service and secret agents across the desert. During the Desert Campaign between December 1940 and April 1943, the vehicles of the LRDG operated constantly behind the Axis lines, missing a total of only 15 days during the entire period.

Possibly their most notable offensive action was during Operation Caravan, an attack on the town of Barce and its associated airfield, on the night of 13 September 1942. However, their most vital role was the 'Road Watch', during which they clandestinely monitored traffic on the main road from Tripoli to Benghazi, transmitting the intelligence to British Army Headquarters.
With the surrender of the Axis forces in Tunisia in May 1943, the LRDG changed roles and moved operations to the eastern Mediterranean, carrying out missions in the Greek islands, Italy and the Balkans. After the end of the war in Europe, the leaders of the LRDG made a request to the War Office for the unit to be transferred to the Far East to conduct operations against the Japanese Empire. The request was declined and the LRDG was disbanded in August 1945.

The LRDG vehicles were mainly two wheel drive, chosen because they were lighter and used less fuel than four wheel drive. They were stripped of all non-essentials, including doors, windscreens and roofs. They were fitted with a bigger radiator, a condenser system, built up leaf springs for the harsh terrain, wide, low pressure desert tyres, sand mats and channels, plus map containers and a sun compass devised by Bagnold. Wireless trucks had special compartments built into the bodywork to house wireless equipment. Initially the LRDG patrols were equipped with one Canadian Military Pattern (CMP) Ford 15 cwt F15 truck for the commander, while the rest of the patrol used up to 10 Chevrolet 30 cwt WB trucks.

From March 1941 the 30 cwt Chevrolets were replaced by the CMP Ford 30 cwt F30, although in some ways this was a retrograde step; because they were four wheel drive and heavier than the Chevrolets, they used twice as much fuel, which in turn reduced the range of a patrol. From March 1942 the Fords were progressively replaced by 200 Canadian Chevrolet 1533 X2 30 cwts which had been specially ordered for the LRDG. From July 1942 Willys Jeeps began to be issued for the patrol commander and patrol sergeant.

Tamiya is an older prolific model company based in Shizuoka City, Japan. They manufacture all manner of model subjects in the popular scales.
THE KIT:

The box art shows the truck posed against one of Tamiya's signature all-white backgrounds that they use for all their box arts.

The truck is overall light tan with a black triangle with a small white letter T over a white 9 on the rear end of the sides and again on the left front fender. A black word INSPECTED and license number 4618825 is on the front bumper and sides of the hood. On the nose of the hood is a black kiwi bird and a black rectangle with a white nickname TETANIWHA on it.
A gunner mans a Lewis machine gun on a pedestal in the crew compartment. He and the driver wear desert uniforms with cloth hats.

​ The driver has a pair of goggles slung over his hat.

The box art names the features of the kit: Two realistic figures and many accessory parts.

One side panel has 3 color box arts of other AFV kits that Tamiya markets:

No kit numbers are provided for these 3 kits.
​WHAT'S IN THE BOX:

There are no clear parts in the kit. Instead, the 2 part split windshield is molded in dark-green plastic and the two are covered with a canvas tarp each.

The instructions are all in Japanese text and consist of a single sheet that accordion-folds out into 6 pages in 8" x 11" page format.

Page 1 of the instructions begins with a black and white repeat of the box art, followed by the history of the truck in Japanese.

Page 2 through 5 give a grand total of 11 assembly steps.

The parts trees illustrations are at the bottom of Page 5.

A Bren light machine gun is included in the kit as an alternative to the Lewis.

Page 6 has two marking and painting schemes shown on a 7-view illustration. One is the box art subject. Already discribed above.

The other is overall tan also, with a rectangle on the sides and left front fender with a white R over 2 on it. A white banner with the black nickname TUTIRA II on it is on the nose of the hood.

I found out these 2 markings were for a New Zealand group. 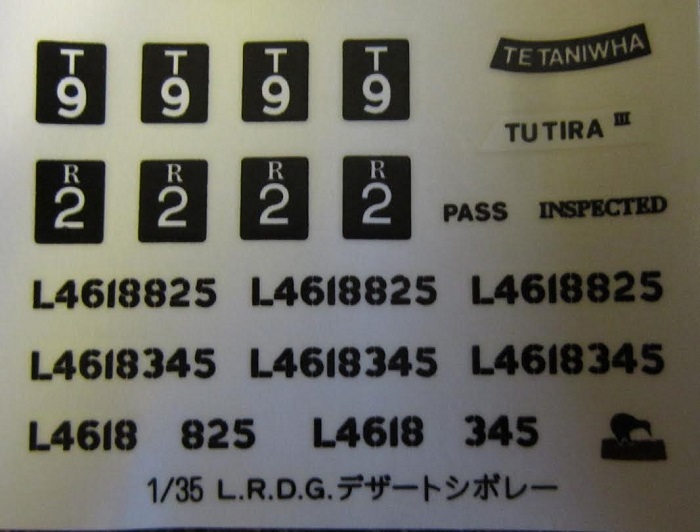 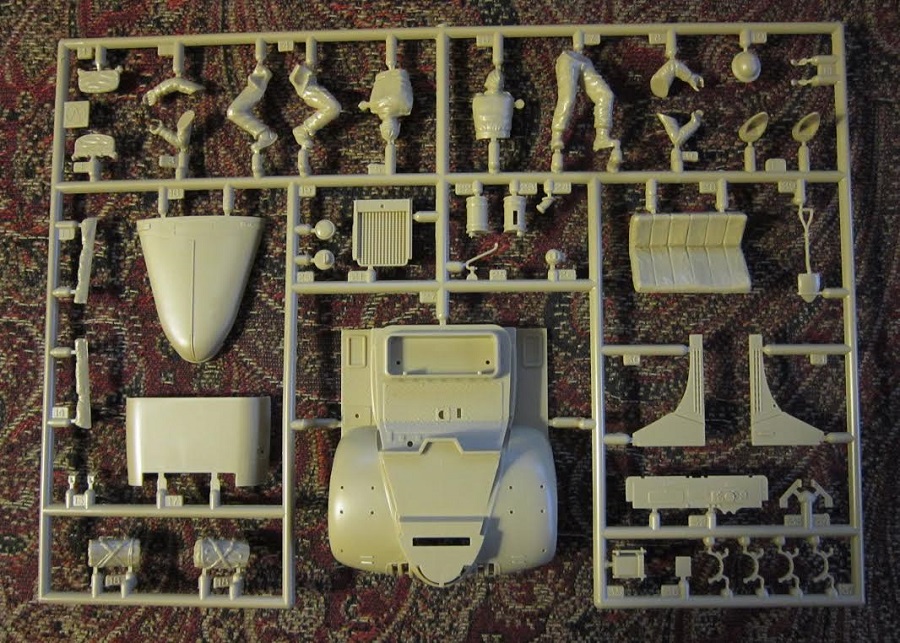 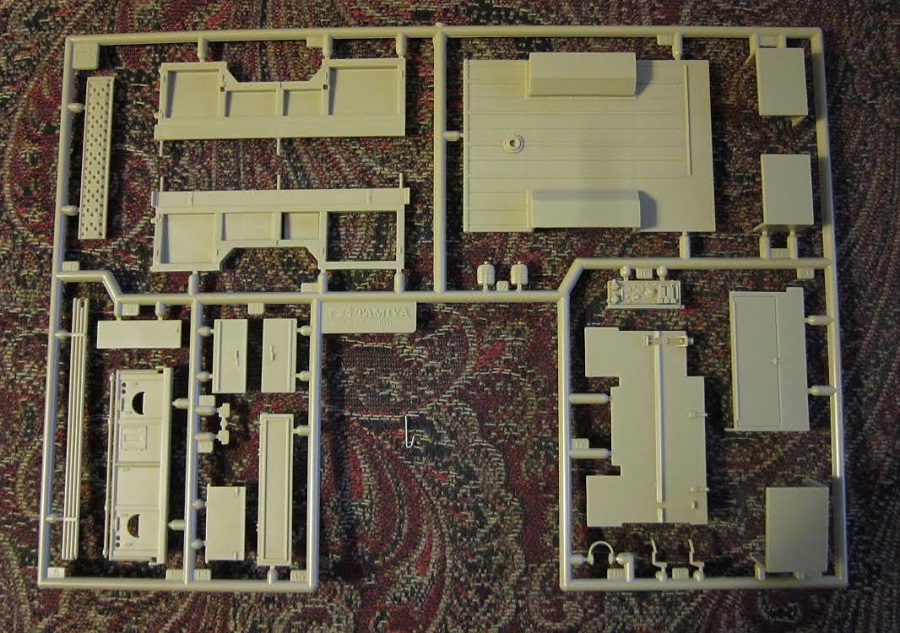 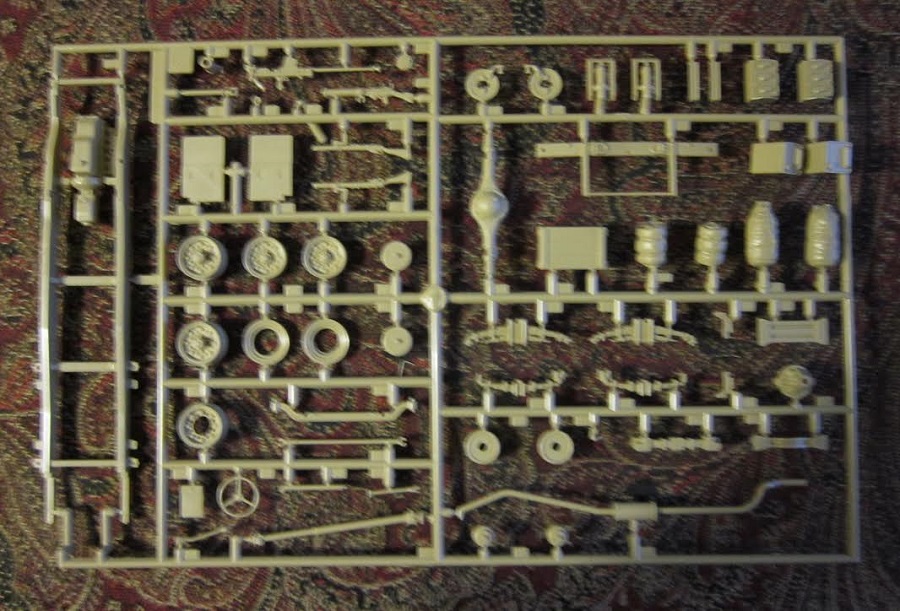 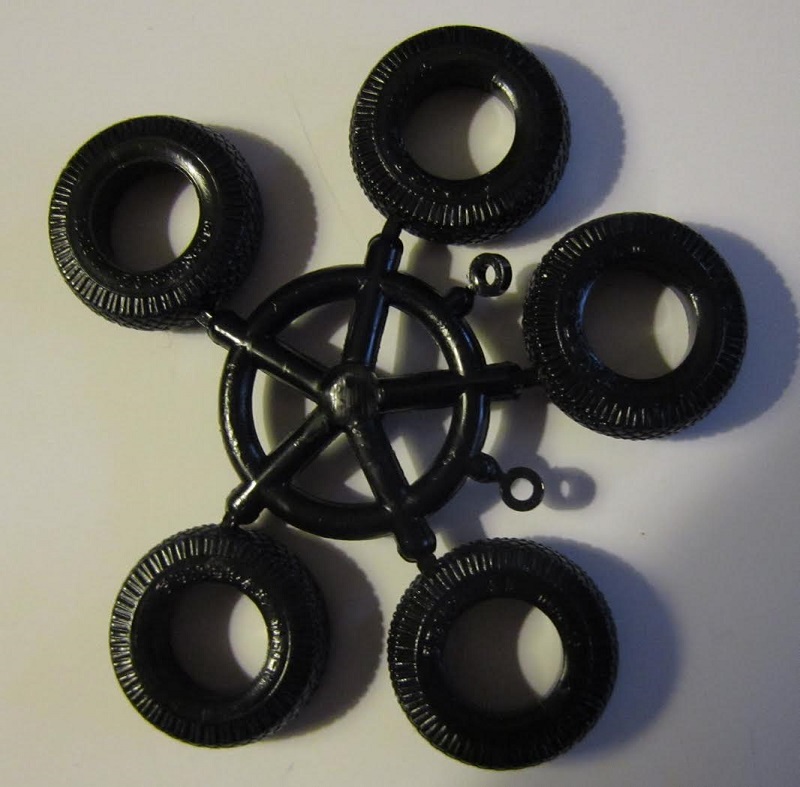 ​The copyright date on this kit is 1976 and it very nicely detailed for a kit that old.
I purchased my kit at my local hobby shop back then for a cheap $7.99 at a shop that went out of business since.