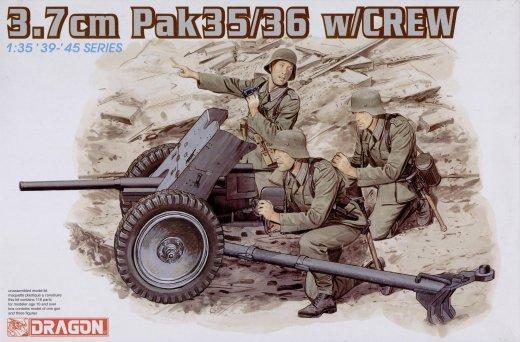 Available from Kit Linx fo $17.55 and at 7 locations overseas on the web.

I paid $14.48 for this kit 18 years ago at Great Hobbies Adventures store in Des Moines, IA, while at a IPMS model contest, when they marked it down from $16.98. They since went out of business.
​HISTORY:

The Pak 36 (Panzerabwehrkanone 36) is a 3.7 cm caliber German anti-tank gun used during the Second World War. It was the main anti-tank weapon of Wehrmacht Panzerjäger units until 1942.

Developed by Rheinmetall in 1933, it was first issued to the German Army in 1936, with 9,120 being available by the beginning of the war in September 1939 and a further 5,339 produced during the war. As the predominant anti-tank gun design in the world during the late 1930s, demand was high for the Pak 36, with another 6,000 examples produced for export and the design being copied by the Soviet Union as the 45 mm anti-tank gun M1932 (19-K) and by other nations such as Japan.

It first saw service during the Spanish Civil War in 1936, where it performed well against the light tanks of the conflict. It was first used during the Second World War against Poland in 1939 and had little difficulty with any of the Polish tanks.

The Battle of France in 1940 revealed its inadequate penetration capability against French and British heavier tanks, particularly the Char B1, and especially the Matilda II, receiving the derisive nicknames "Heeresanklopfgerät" ("army door-knocking device") or "Panzer Anklopfen Kanone" ("tank door-knocking cannon") from its crews, but it sufficed to defeat the bulk of the Allied armor in the campaign.

The invasion of the Soviet Union brought the Pak 36 face to face with large numbers of T-34 and KV-1 tanks, which were invulnerable to its fire. However, 91% of the Soviet tank forces in 1941 consisted of lighter types that lacked sufficient armor to defeat the gun, and the Pak 36 knocked out thousands of such tanks.

The Pak 36 was replaced from late 1940 onward by the 5 cm Pak 38 anti-tank gun and from November 1941 by the 7.5 cm Pak 40. This process was accelerated by the engagements with the modern Soviet tanks, and Pak 36 production ceased entirely in early 1942. The introduction in 1943 of the Stielgranate 41 shaped charge gave it the ability to punch through the armor of any Allied tank, but the ammunition's short range made the Pak 36 crews vulnerable to enemy fire and could not solve the gun's basic obsolescence.

German paratroopers employed the gun due to its low weight and consequent high maneuverability. The Pak 36 was also used by Axis-allied, second-line, garrison and training units until the end of the war.

The box art shows a color illustration of the 3.7cm Pak 35/36 and its 3 man gun crew set up next to a pile of rubble.

The crew all wears field-grey uniforms and steel helmets. One crew man is operating the gun, kneeling on one knee. He has a canteen, mess kit, canvas pouch and a shovel in its carrying case slung on his belt

The second crew man is kneeling behind him. He carries the same field gear on his belt, plus a gas mask canister.

The third crew man is kneeling between the gun and the pile of rubble. He has the same field equipment as the other crew men, plus a canvas ammo pouch on his belt. He has his right arm pointing and has a pair of binoculars in his left hand.  I believe he is probably the commander of the gun?

One corner of the box art says it is a unassembled model kit of 116 parts for modelers age 10 and over. Box contains one gun and 3 figures.

One side panel begins with 2 color walk-around type photos of the gun and crew made up. These are followed by a CAUTION that says to not use paint and glue near an open flame and when you do use them to be in a well ventilated room.

Kit is designed for modelers age 10 and over and is not suitable for children under 3 due to sharp parts, in multiple languages including English.

These are followed by the copyright of the kit as 2002, over DML’s street address in Hong Kong, China and the kit was made there.

The instructions consists of a single-sheet, printed in color, on slick-coated paper. It accordion-folds out into 6 pages in 7” x 10” page format.

Page 1 has a color repeat of the box art at the top, over the parts trees illustrations. A few parts are shown shaded-out. Meaning they are excess and not needed to complete the model.

Page 2 begins with ATTENTION-IMPORTANT INFO. about the kit,over international assembly symbol explanations and a suggested listing of Gunze Sangyo and Italeri brands of hobby paints in multiple languages, including English.

The bottom of page 2 through to page 5 gives a grand total of 11 assembly steps. The first 10 are for the gun and the 11th is for assembly and painting of the figures.

Bottom of the page repeats the copyright date of 2002. Instructions were printed in China.
​Trees are not alphabetized. 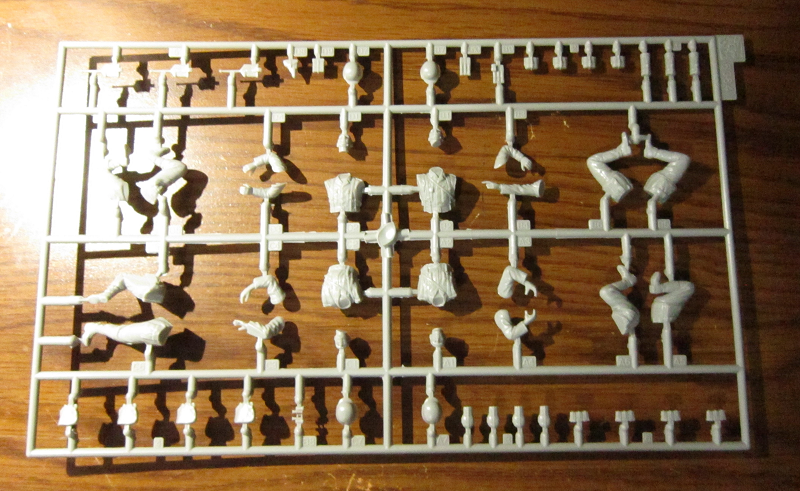 A set of spare arms are included too.

​The next medium-grey trees are  co-joined. These hold the parts of the Pak gun and rocket rounds (25 parts) 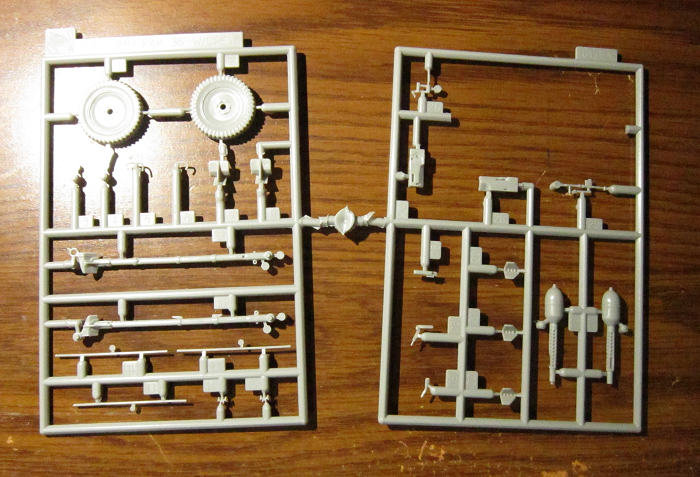 ​There are no decals in the kit and it does not need any really. The only markings I have ever seen for this gun were kill rings around the barrel.

Highly recommended. It will make up into a great diorama.