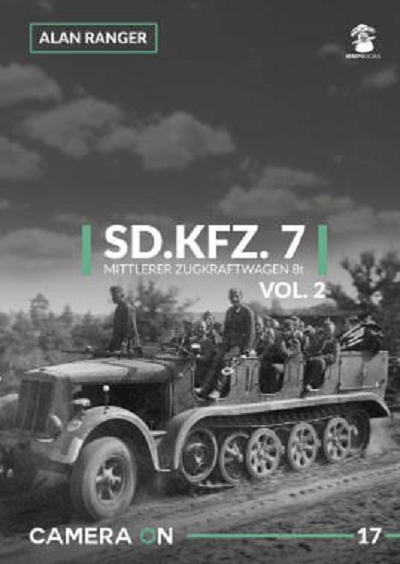 The Sd.Kfz. 7 was a half-track military vehicle used by the German Wehrmacht Heer, Luftwaffe and Waffen-SS during the Second World War. Sd.Kfz. is an abbreviation of the German word Sonderkraftfahrzeug, "special purpose vehicle". A longer designation is Sd.Kfz. 7 mittlerer Zugkraftwagen 8t, "medium towing motor vehicle 8t".

Development of the Sd.Kfz. 7 can be traced back to a 1934 Wehrmacht requirement for an eight-tonne (7.87 tons) half-track. Various trial vehicles were built by Krauss-Maffei from 1934 to 1938. The production vehicle first appeared in 1938 and was intended to be used mainly as the tractor for the 8.8 cm FlaK gun and the 15 cm sFH 18 150 mm howitzer.

Production was stopped in 1944. The vehicle was made by Krauss-Maffei in Munich, the Saurer Werke in Vienna and the Borgward works at Bremen. Because of its heavy power, it often found use as a recovery vehicle.

Mushroom Model Publications (MMP) is based in the UK. All their books are printed in English by their associate Status in Sandomierz, Poland. Stratus also publishes their own line of books in both Polish and English.

This is a neat book. I am a little disappointed that the book has no color illustrations in it. MMP books usually have color profiles.

This book will be of great interest to AFV modelers and military historians alike.

I want to thank Casemate Publishers, who sent me this review sample and also Roger Wallsgrove the owner of MMP books.

Casemate is the North American distributor of MMP books and all MMP book titles can be seen on Casemate’s website at:
www.casematepublishers.com