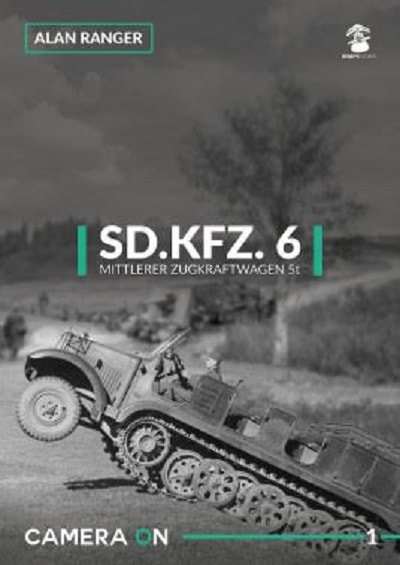 MSRP: $25.00
​MMP is Mushroom Model Publications. They are located in the UK. All their books are printed in Sandomierz. Poland by their associate Stratus in English. Stratus also prints their own line of books in English and Polish.

During WWII, the German armed forces were the greatest user of half-track vehicles. Such vehicles were used in the Wehrmacht, Luftwaffe and Waffen SS., where thy served as personnel carriers, tractors, combat engineering vehicles, as well as self-propelled carraige of anti-aircraft and anti-tank guns.

One of them was the Sd.Kfz. 6 (Sondekraftfahrzeug 6) Mitterer Zugkraftwagen 5t (middle half-track vehicle 5 tons). It was designed to be used as the main towing vehicle for the 10.5cm le.FH 18 howitzer.

The Sd.Kfz. was manufactured mainly by Bussing-NAG, with about 3,800 units being produced.

This book presents a collection of photos of different versions of the tractor from private archives of German soldiers. The photos depict vehicles serving on all fronts and in a wide variety of roles.

This profusely illustrated photo album holds 143 black and white photos, counting the cover art. These are previously unseen pictures, many from private sources in Germany.

Whatever the rules might have said, German soldiers took many photos, and these are the basis for this book. Photos of all the main production versions are shown, including self-propelled anti-aircraft guns, artillery tractors and pioneer vehicles.

The author is a British acknowledged expert in this field.

On the last pages of the book there is a page that has black and white photos of the running gear arrangements of the the Sd.Kfz. 6 through 11 versions.

Another page has black and white photos showing the front and rear of these 6 versions.

The last page has line drawings of profiles of the 6 versions showing size comparison between types.

This book will be of great interest to AFV historians and modelers alike.
Highly recommended.

I want to thank Dr. Roger Wallsgrove, Editor-in-Chief of Mushroom Model Publications and the folks at Casemate Publishing who sent me this review sample.

Casemate is the North American distributor for MMP books and all the titles can be seen on their site at:
​www.casematepublishing.com