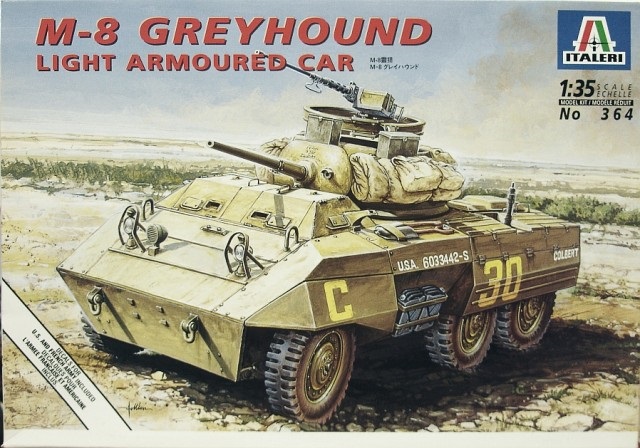 This armored car was standard issue with the reconnaissance units of the U.S. Armored Divisions in Europe during the second half of 1944, and was extensively used by the free French Forces during the liberation of French territory. The M-8 was characterized by a futuristic shape for it’s time and high mobility. At the same time, it did not have sufficient armor and armament to fight the German tanks. The open turret did not offer any protection for the crew. After WWII, the Greyhound was widely used by many European armies.

KIT CONTENTS:
The kit comes in a tray and lid type box. The box art shows a M-8 “Greyhound” parked in what almost looks like desert terrain. It is shown in a very sun-faded olive green overall. There is a large yellow letter “C” just above the front wheels on the wheel well covers, over the side jerry can rack is white lettering that says U.S.A. 6033442-S. On the rear wheels cover is a yellow “30” followed by the nickname “Colbert” in white. This is one of the two markings included on the decal sheet in the kit.

Side panels of the box give the history of the M-8 in the languages of 12 different countries, marked with color illustrations of the flags of those countries (including English). There is a copyright date of 1998 and the kit is recommended for modelers 10 years of age and older.

Inside the box are 4 trees of very dark olive drab parts. The parts tree drawings, in the instructions just shows 2 parts trees. However, Italeri has cut one row of parts, per tree, off these trees so that they can fit the box.

The instructions consists of a single sheet that accordion folds out into 10 pages of 12 ¾” x 7 5/8” format.

Page 1 has the history of the M-8 “Greyhound” in 8 languages, including English.

Page 2 begins with general instructions in 11 languages, including English, then the parts trees illustrations and a listing of Italeri/Model Master brand paints, suggested for finishing the model.

Pages 3 through 8 give 12 assembly steps.

Page 9 has 2 painting and marking schemes as 4-view illustrations.

There are no clear parts in the kit for the headlight lenses. 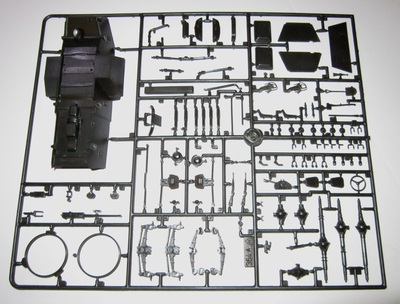 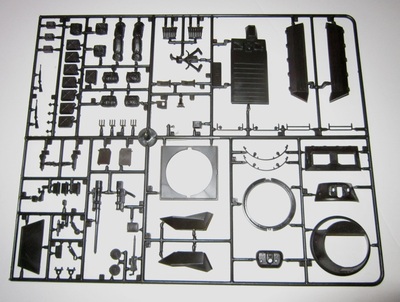 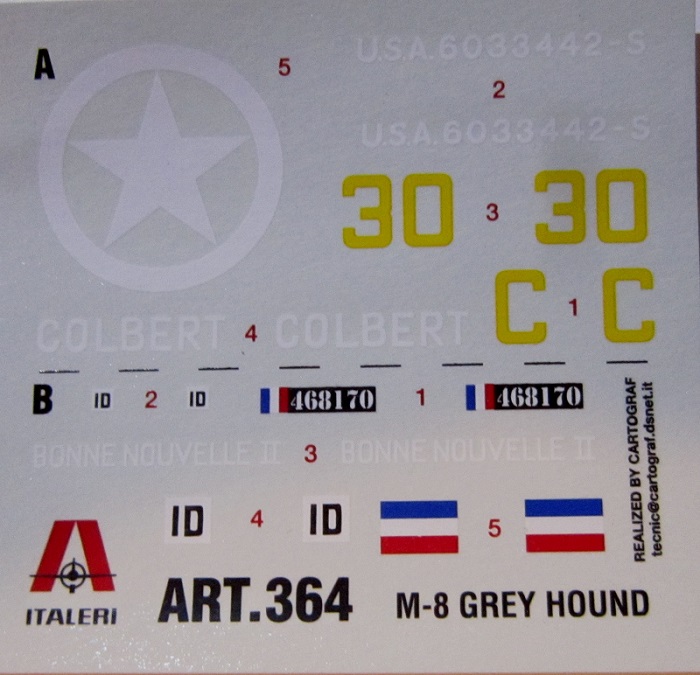 This is one neat U.S. armored car model. There are no crew figures included in the kit and parts trees are loose and not cello bagged. This is a pet peeve with me about Italeri. Parts get broken off the trees due to friction between trees.

Kit was compliments of my wallet back in the 90’s.