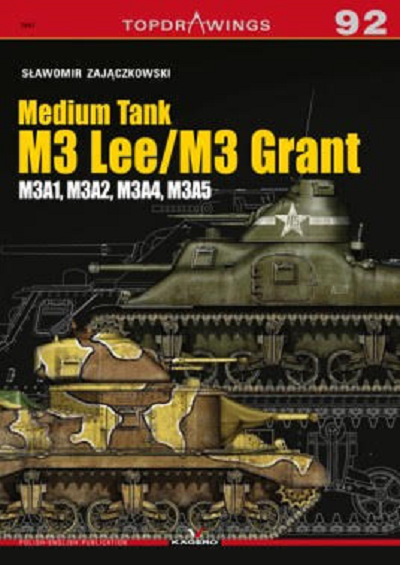 MSRP: $24.95
The M3 General Lee – an American medium tank from WWII era, also used by the British Army in the U.S. known as the Lee, was called in the United Kingdom as the M3 Grant. It was created as a result of the need to replace obsolete M2 tank, which did not match the WWII battlefield.

The serial production begun in August 1941. The M3 tan had many components from the M2 light tank, including chassis, Wright R975 EC2 star engine and the shape of the combat compartment.

The M3 was meant to be a transitional solution due to the lack of turrets for a 75mm cannon (M2 type cannon) which was finally mounted in the sponson on the right front of the hull. A second anti-tank gun – 37mm caliber was mounted to the turret and intended to fight enemy vehicles. The original M3 was equipped with a riveted hull and a turret in which M6 cannons were mounted (cal. 37mm).

In the M3A1 version the riveted turret construction, dangerous to the crew was replaced with a cast version. The new turret was easier to assemble, which accelerated the production process. It also reduced the weight of the vehicle .

Both guns were equipped with gyroscopic stabilizers. Additional armament included two or three Browning M1919 machine guns, caliber 0.30 inches. In the American M3, two Brownings were mounted in a small rotating dome at the top of the turret. In the British version, there was a entrance hatch for the crew.

The crew of the tank consisted of 6 soldiers (initially 7). A total of 6,258 M3 tanks were produced in all versions. They served in the British, Australian, American and Soviet armies.

This book is in both Polish and English.

The cover art shows color illustrations of M3 Lee over a M3 Grant. They are posed over a black background that has a white line drawing of a M3.

The Lee is overall olive-drab with a white band around the turret with a star in the center of the band on the sides of the turret. The white star has black AFS on it. This profile is repeated on the back cover of the book.

The M3 Grant is in a base of olive-drab with amebic yellow spots outlined in white on it and no markings shown. This profile is repeated inside the book too. It was with the 8th Army, Battle of El Alamein.

The book has a loose single-sheet that is folded in the center to create 4-pages and loose in the book. It is the same size as the pages in the book.

It holds 1/35th scale line drawings of the M3 Grant. Across two pages there is a 5-view. On the third and fourth page there are 2-views.

Page 1 of the book has a short history of the M3 over Kagero’s address and phone number in Lublin, Poland.

For 1/35th scale line drawings of the Lee there is: six 5-views, two side views, seven 3-views and seven 2-views.

For 1/36th scale line drawings of the Grant there is only one 5-view in the book.

On the back cover there are two side views of the M3 Lee.

This is a neat book and it will be of great interest of modelers that plan to build a M3 Lee or Grant.
​I want to sincerely thank Casemate Publishers, the North American distributor of Kagero books for this review sample. All Kagero book titles can be viewed on Casemate’s website at:
www.casematepublishers.com
​​Highly recommended.