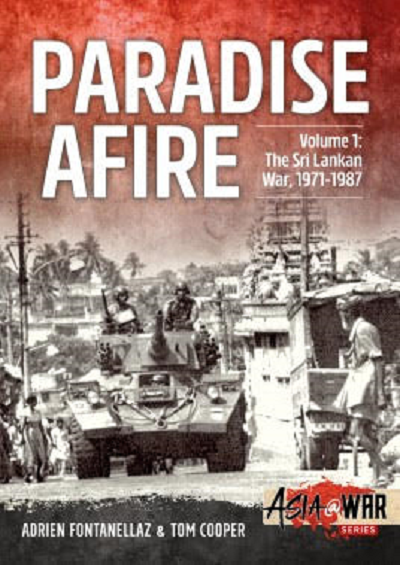 MSRP: $29.95
​Helion & Company is based in the UK.
When released into independence from Great Britain in 1948, the stunningly beautiful island of Ceylon, re-named Sri Lanka in 1972, was expected to become a sort of "South Asian Singapore".

A host of unsolved ethnic conflicts and social inequalities conspired to erupt into an armed conflict  in 1971. When this broke out, the entire Sri Lankan society was shocked to its core by a large scale insurgency instigated by a Sinhalese Maoist group JVP.

Worst still, this was followed by the gradual build-up of several other Tamil groups in the north of the island.

Following riots known as "Black July" in 1983, Sri Lanka was ripped apart by a murderous war against Tamil insurgents, which caught the armed forces wrong-footed because of the government's reluctance to build-up its military to necessary levels.

This came to a temporary stop in 1987, with the implementation of a peace agreement, virtually enforced by the government of India and a deployment of a large peace-keeping force of the Indian military.

By that time, the notorious LTTE had emerged as the most powerful Tamil insurgent movement, and the principal opponent of the Sri Lankan armed forces.

However, this provided some breathing space for the Sri Lankan military, which then launched a vicious and protracted counter-insurgency campaign against the JVP.

The fighting thus went on.

Relying on extensive studies of the Sri Lankan War with the help of first-hand sources, official documentation and publications from all the involved parties, this volume provides a in-depth and particularly detailed account of military operations during the first 16 years of this war.
​THE BOOK:
​The cover art of the book shows a black and white photo of a Saladin armoured car of the 1st Reconnaissance Regiment SLA, which were delivered after the 1971 insurgency.
The book is soft cover of 64 pages in 8 1/2" x 11 1/2" page format.

It contains paintings of Sinhalese natives in the 16th Century, a painting of a battle between Dutch and Portuguese fleets off Goa in 1938, a painting of Sir. Radjadhi Rajajinhe, King of Kandy in 1782-1798 on his throne, a Swiss regiment in 1860's  and the Dutch fleet in post at Colomba.

There are 3 information lists.

The book also contains 83 black and white photos and 4 color ones.

There is an illustration of the official crest of the PLOTE, 4 black and white pictures of the damage to a city during the "Black July" battle and 3 shots of Jaffna Fort.

At the back of the book is a 3 1/2 page bibliography, notes, acknowledgements and about the authors.

Is from Switzerland, he is a military history researcher  and author, He developed a passion for military history at an early age and has progressively narrowed his studies to modern-day conflicts.

He is a member of the Scientific Committee of the Pully-based Centre d'histoire et de prospective militaries (Military History and Prospective Centre), and regularly contributes for the Revue Militaire Suisse and various French military history magazines.

He is co-founder and a regular contributor to the French military history website L'autre cote' de la colline, and this is his third title for Helion's@War series.

Is an Austrian aerial warfare analyst and historian. Following a career in a world-wide transportation business, during which he established a network of contacts in the Middle East and Africa, he moved into narrow focus analysis and writing on small little-known air forces and conflicts, about which he has collected extensive archives.

This has resulted in specialisation in such Middle Eastern air forces as those of Egypt, Iran, Iraq and Syria, plus various African and Asian air forces. As well as authoring and co-authoring more than 30 books, including an in-depth analysis of major Arab forces at wars with Israel during the period 1955-1973, and over 1,000 articles.

Cooper is a regular correspondent for multiple specialised defence-related publications.

The are 4 color cover arts of other Helion & Company books on the back cover of this book:

The Easter Offensive, Vietnam 1972, Vol.2, Tanks in the Streets, A War Within a War, Turkey's Struggle with the PKK Since 1984, Counterinsurgency in Paradise, Seven Decades of Civil War in the Philippines and Targon Saigon, Vol.1, The Pretence of Peace.

This will be of great interest to historians and modelers alike.

I sincerely want to thank Casemate Publishing for this review sample and the folks at Helion & Company.

Casemate is the N. American distributor of Helion & Company books and all their titles can be seen at:
www.casematepublishers.com