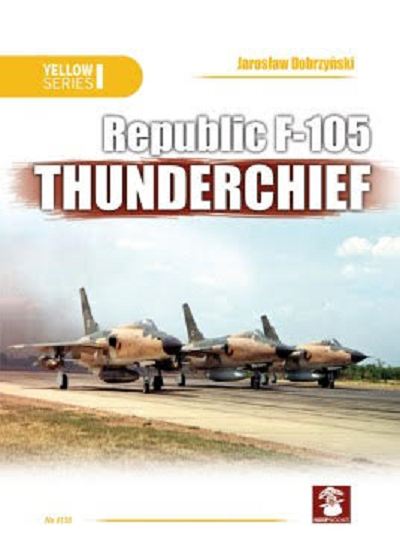 Mushroom Model Publications is publisher based in the UK. All their books are printed by their associate Stratus Publications in Sandomierz, Poland in English. Stratus does their own line of books in both Polish and English.

This book is an illustrated technical history of the Republic F-105 Thunderchief fighter-bomber used by the U.S. Air Force. The F-105 conducted the majority of strike bombing missions during the early years of the Vietnam War.

The book details the history of the development and service, as well as the technical description with special focus on avionics of this famous Cold War-era fighter-bomber, whose primary role was to be nuclear weapon delivery.

But instead saw widespread service as conventional bomber and interdiction during the Vietnam War. Its two seat trainer variant was converted to perform a new mission - suppression of enemy air defense (SEAD) - and proved highly effective in this role.

After the Vietnam War, the type served with Air National Guard and Air Force Reserve units until early 1980's.

This is a rarely documented aspect of Cold War aviation history. It features superb color profiles of camouflage and markings, walk-around color photos and rare black and white archive photos.

There are 125 color photos (including the cover) and 143 black and white ones in the book.

For color side view illustrations there are:

It has lined drawings of various versions of the F-105 as line drawings on each side in 1/72nd scale:

This is neat book. It will be of great interest to aircraft historians and modelers alike.

I wish to thank Dr. Roger Wallsgrove, Editor-in-chief of Mushroom Model Publications (MMP) and the folks at Casemate Publishing who sent me this review sample.

Casemate is the North American distributor of MMP books. All MMP titles can be seen on their web site at:
www.casematepublishing.com