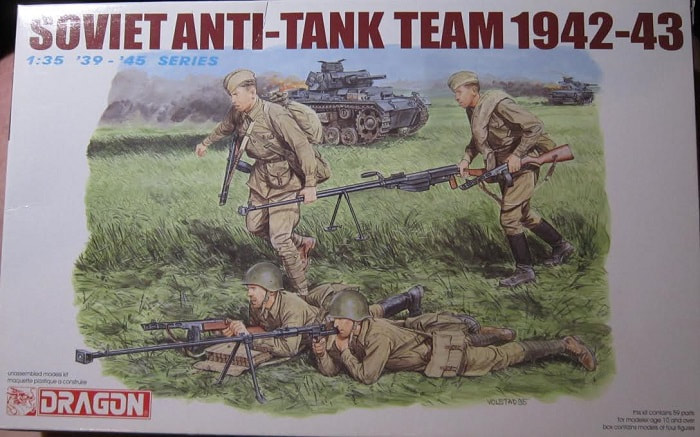 In WWII the Red Army used two types of anti-tank rifles: the Degtyarev PTRD with single cartridges and the five-round PTRS. Both were developed to meet the requirement to supply an anti-tank rifle using the 0.57 x 4.4 inch (14.5 x 114mm) cartridge in the shortest possible time.
Just one month later both weapons were tested, but neither one seemed to be better than the other.

Therefore, the Soviet armed forces introduced both weapons into active service in 1941.
In contradiction to a view widely held at that time, anti-tank rifles were not completely useless. On the battlefield a large number of only lightly armored vehicles were moving around whose armor could easily be penetrated by an anti-tank rifle.

The side armor of early German battle tanks was also vulnerable against the anti-tank rifles of the Red Army. At first glance the PTRD appears to be a primative weapon, but in reality it is complex. The barrel moves a certain amount back into the shaft as a result of the recoil during firing, which results in the bolt rotating and unlocking.

At the end of this movement the bolt engages, while the barrel is pushed back into the initial position. This opens the breech and the empty cartridge shell is ejected. Now the soldier firing the weapon can load a new cartridge and close the breech manually.
​THE KIT:

The box art shows 4 Soviet anti-tank troops on a grassy plain with 2 knocked out German Pz.Kpfw. III's in the background.

All four of the figures are dressed in khaki uniforms. Two are running and two are prone.

The two prone figures have steel helmets on their heads and one is aiming a Degtyarev Model PTRD 1941 anti-tank rifle on a bipod. He has a large canvas sack slung over his back and his pants are bloused into gaiters over low shoes. He has a canteen and another large pouch on his belt.

The second prone figure is lying beside him and holds a PPSH submachine gun. He is leaning on a case of ammo for the Degtyarev. He has a pouch for the drum magazine for his PPSH, a canteen and a canvas pouch on him.

The two running figures are carrying a second Degtyarev. It has a different type of bipod and a carrying handle on top. Both are armed with PPSH sub machine guns and have the ammo cases for them on their belts. They each wear cloth side caps. The one carrying the barrel has a canvas sack on his back and another satchel on his belt. His pants are bloused into gaiters above low shoes.

​
The second figure carrying the Degtyarev by the shoulder stock has a tarp slung over his shoulder. He is armed with a PPSH too. He wears black jack boots. Has a canteen on his belt and a ammo case for a drum magazine for the PPSH.
One side panel has photos of 2 box arts of other kits that DML Dragon produce. They are kit no. 6039 German Ski Troops and kit no. 6047 JSU-122S/152 Tank Destroyer.

The bottom of the box serves as the assembly and painting instructions. There are four color 2-views for each figure.
​Below them there are black and white line drawings of a gas mask case, a PTRS/PTRD ammo case, Sharovarii (semi-breeches field trousers and a Gymnastioka (field blouse).

All illustrations are done by DML's resident artist Ron Volstad. 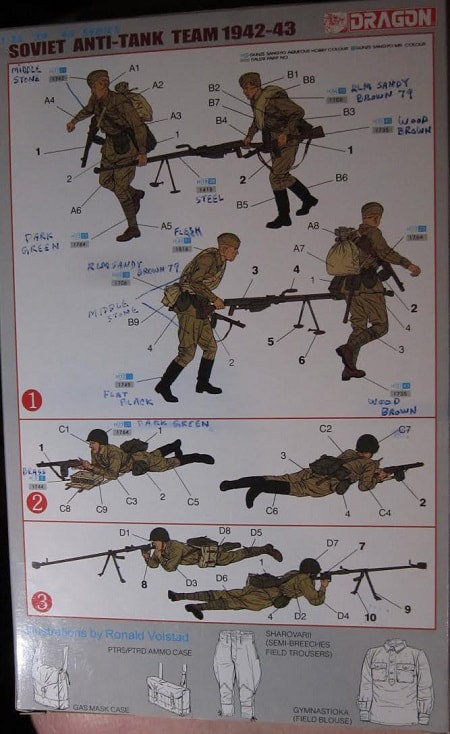 The large light-grey tree holds: the parts of the four figures (divided into separate heads, torsos, arms and legs), 3 shovels in pouches, 4 gas mask cases, a canvas sack, 2 steel helmets, a PTRS/PTRD ammo case with a separate part showing the tops of the cartridges inside, 4 canteens, a canvas pouch, the tarp that drapes over the one figures shoulders, 3 ammo drum cases for the PPSH. (48 parts) 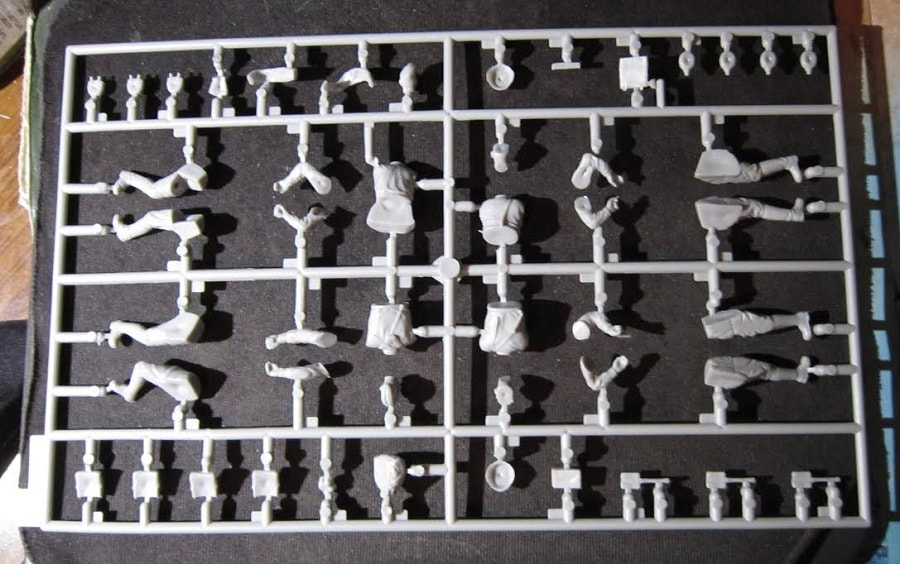 ​The small light-grey tree holds: 2 Degtyarev's and their 2 different bipods and a carrying handle, 3 PPSH's and 3 ammo drums for them. (12 parts) 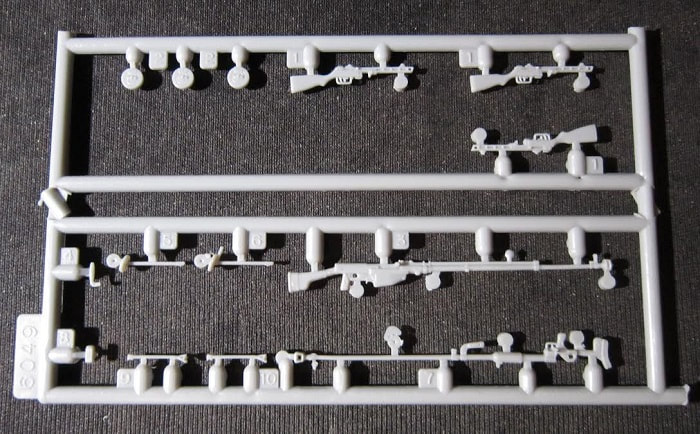 These are neat Soviet troops with an unusual weapon. They will make into a neat diorama.
​I purchased my kit back in the 90's at my local hobby shop.