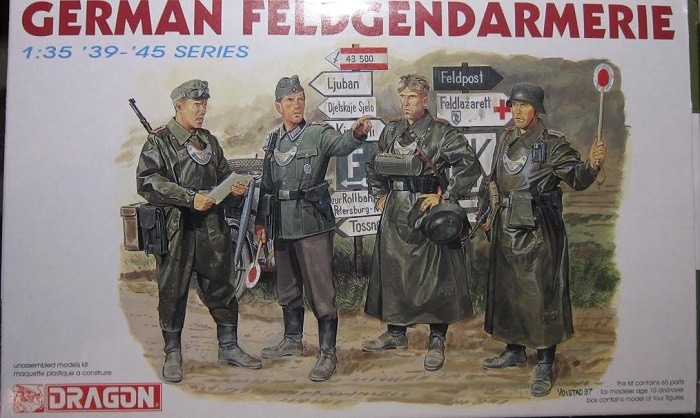 The Feldgendarmerie[1] were the uniformed military police units of the armies of the Kingdom of Saxony (from 1810), the German Empire and the Third Reich until the conclusion of World War II.
When Adolf Hitler came to power in 1933,

All prospective candidates served at a Feldgendarmerie command after the first term of examinations. Courses lasted one year and failure rates were high: in 1935 only 89 soldiers graduated from an initial intake of 219 candidates. Feldgendarmerie were employed within army divisions and as self-contained units under the command of an army corps. They often worked in close cooperation with the Geheime Feldpolizei (English: Secret Field Police), district commanders and SS and Police Leaders. 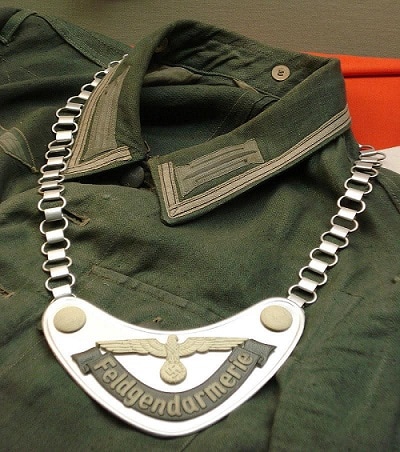 ​THE KIT:
This kit came in a shrink-wrapped end-opening type box. I am no fan of this type of box, because invariably parts or the decal sheet find their way past one of the end flaps to become lost forever. Give me a tray and lid type box any day of the week.

The box are shows 4 standing figures on a dirt road with sign posts behind them that have some names of Russian cities on them. A motorcycle is next to the sign posts and barely visible.
One figure wears black leather overalls tucked into black jack boots. He has the gorget on a chain around his neck, a map case on his hip and is holding a map.  He has a field grey peaked cloth cap with goggles strung on it.

The third figure wears a long black leather motorcyclist coat, belted at the waist and black jack boots. the gorget on a chain around his neck. he is bare-headed with a pair of goggles strung around his forehead. He has a gas mask canister strung on his chest and a 98K carbine slung ovger his back. He is holding a black steel helmet in his left hand.

The fourth final figure is also wearing a long black leather motorcyclist coat that is belted at the waist with a black belt that holds a MP40 machine-pistol's ammo pouch and a pistol holster. He has a pair of motorcyclist gloves tucked under the belt and has black jack boots. He wears a black steel helmet on his head and has a MP40 in his right hand and is holding up a traffic baton with his left arm.

One side panel of the box has 2 color box art illustrations of other figure kits that DML markets: kit no. 6057, German Grenadiers (East Prussia 1945) and kit not. 6058, German Panzerjagers (Eastern Front 1944).

​This is followed by "Kit not suitable for children under 3, due to small parts. It is designed for modelers over 10", in multiple languages, including English.

The other side panel of the box says the kit contains parts for 4 figures. Glue and paint are not included, in 6 languages, including English. Each marked with a color illustration of the flag of the country that speaks that language. Followed by the copyright date of 1997 for this kit and DML's address in Hong Kong, China and MADE IN CHINA.

The bottom of the box serves as the assembly and painting instructions, with a 2-view of each of the 4 figures and black and white illustrations of a traffic baton, motorcyclist gloves and coat.
This is a neat kit of German field policemen. The poses are a little ho-hum, but the detail is great. 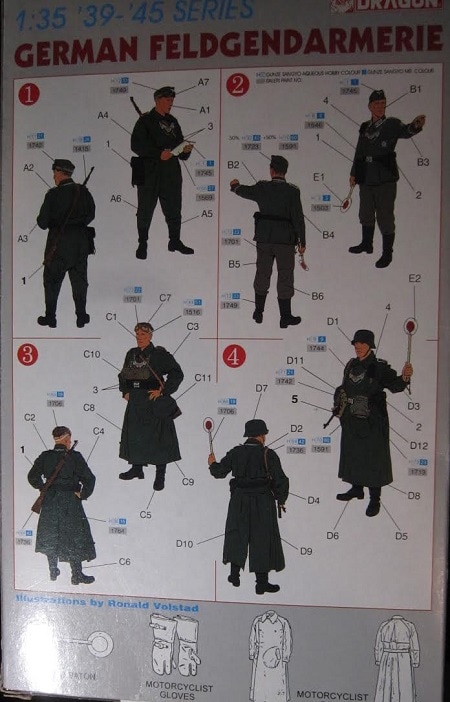 This kit contains one large and two small light-grey trees in sealed cello bags, a printed sheet of road sign markings (not a decal). This should have been a decal sheet. The signs have to be cut out with a scissors and then glued to the sign posts. Bad move DML.

One small light-grey tree in its cello bag is in the cello bag with the large tree. 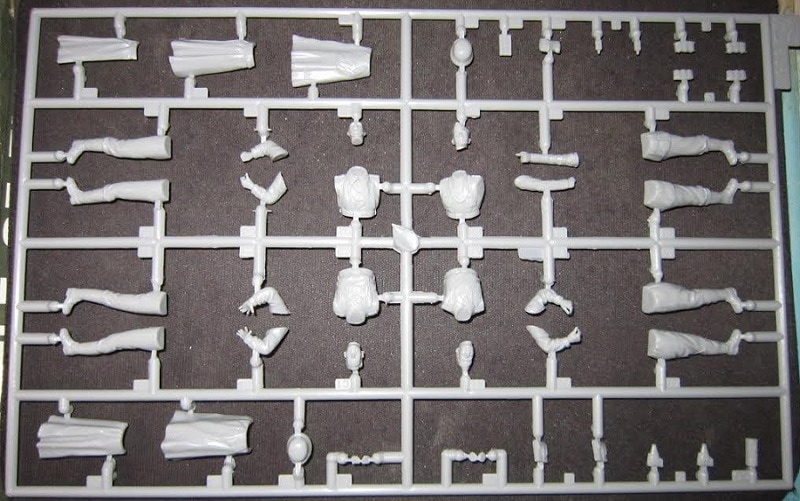 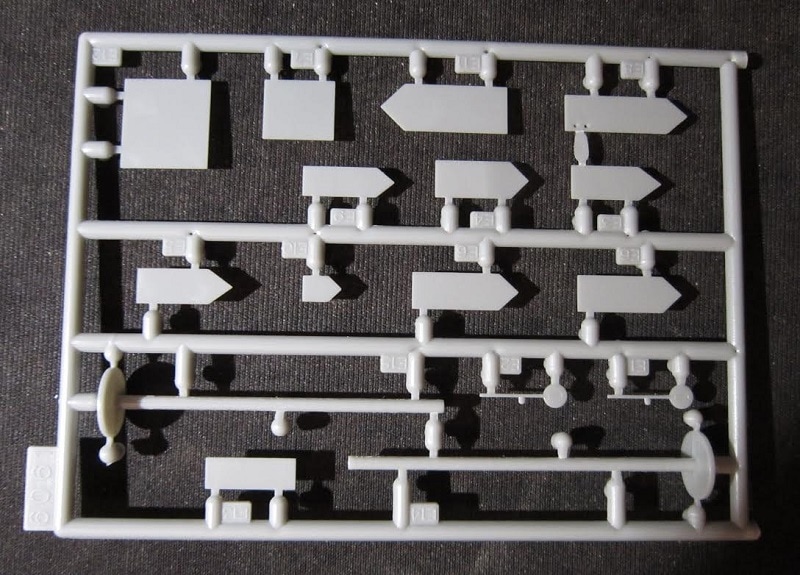 ​
The sheet with the signs printed on it completes the kits contents. 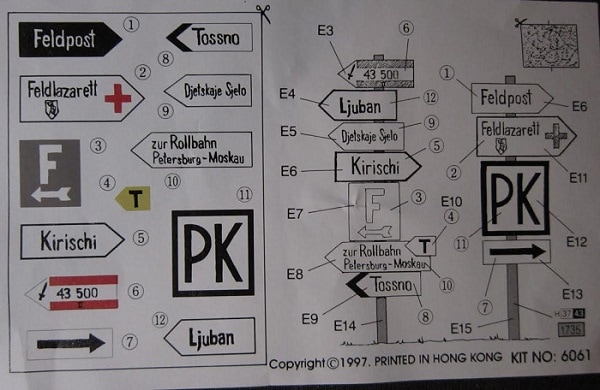 I recommend this kit. I just wish the signs had been a decal sheet.
​I bought my kit at my local hobby shop back in the late 90's.