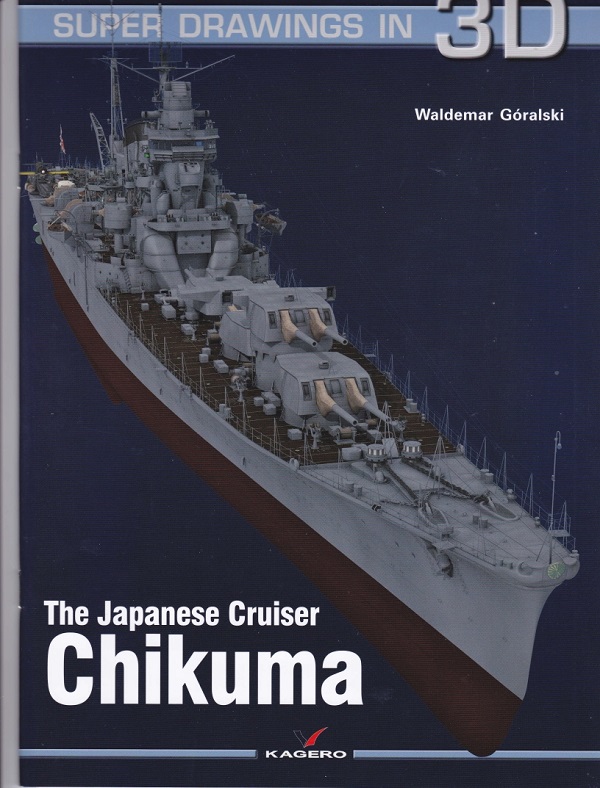 MSRP: $28.95
HISTORY:
The three Chikuma-class cruisers ( Chikuma-gata bōgojun'yōkan?) were protected cruisers operated by the Imperial Japanese Navy. They participated in numerous actions during World War I.
The Chikuma class was the final class of protected cruiser in the Imperial Japanese Navy, and was followed by the Tenryū class of light cruisers.

Kagero is a book publisher based in Lublin, Poland. There books are printed in English.

The book is soft cover of 81 pages in 8 ¼” x 11 ¾” page format. It came in a self-sealing clear envelope and includes a pair of cardboard glasses that have one red lens and one blue lens, to wear to be able to see the paintings in 3D.

There are 149 color 3D paintings of every inch of the Chikuma’s anatomy.

There is a large 26 ½” x 18 ½” sheet, folded several times and inserted loose into the book that has scale drawings to 1/350th scale on one side showing the port and starboard sides and the top of the Chikuma, plus a head-on bow and stern drawing.

The other side has drawings of the Chikuma to no particular scale.

The last page of the book is a color catalog showing the cover arts of 34 other 3D ship books Kagero publishes.

This book will be of great interest to ship modelers, naval historians and enthusiasts alike. It shows all a person would want to know about the Chikuma.

I want to thank the folks at Kagero and at Casemate for sending me this review sample. Casemate is the N. American distributor for Kagero and all of Kagero’s offerings can be seen on Casemate’s web site.