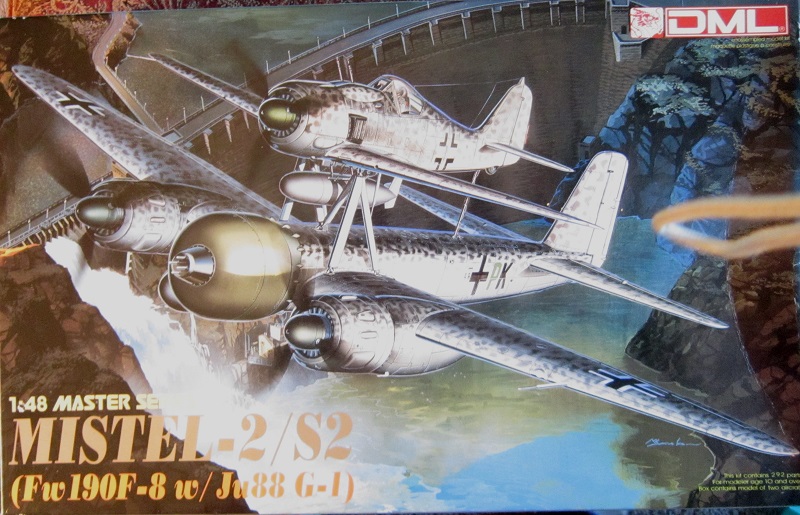 Mistel (German for "mistletoe"), was the larger, unmanned component of a composite aircraft configuration developed in Germany during the later stages of World War II. The composite comprised a small piloted control aircraft mounted above a large explosives-carrying drone, the Mistel, and as a whole was referred to as theHuckepack ("Pick-a-back" in British English, "piggyback" in American English), also known as the Beethoven-Gerät ("Beethoven Device") and Vati und Sohn("Daddy and Son").

The most successful of these used a modified Junkers Ju 88 bomber as the Mistel, with the entire nose-located crew compartment replaced by a specially designed nose filled with a large load of explosives. The upper component was a fighter aircraft, joined to the Mistel by struts. The combination would be flown to its target by a pilot in the fighter; then the unmanned bomber was released to hit its target and explode, leaving the fighter free to return to base. The first such composite aircraftflew in July 1943 and was promising enough to begin a programme by Luftwaffe test unit KG 200, code-named "Beethoven", eventually entering operational service.


The first such experiments in Nazi Germany concerning composite aircraft of any type were performed with the DFS 230 troop glider as the "lower" component and using established, engine-powered Luftwaffe aircraft, such as the Focke-Wulf Fw 56 or the Messerschmitt Bf 109E, as the upper component in an attempt to provide the troop glider with a longer range than if it was simply towed in the conventional manner.

Later, the technique became more refined, and the bomber component (which was often a new aircraft rather than surplus) was fitted with a specialised 1,800 kg (3,960 lb.) warhead. The final stage of Misteldevelopment was of specialised purpose-built jet-powered bomber components, including ones developed from the Messerschmitt Me 262, the Junkers Ju 287 and the entirely new Arado Ar 234. None of these ambitious schemes had left the drawing board before the end of the war.

The Mistel warhead was a shaped charge of nearly two tonnes in weight fitted with a copper or aluminium liner with the weight of a blockbuster bomb. The use of a shaped charge was expected to allow penetration of up to seven meters of reinforced concrete.

Some 250 Mistels of various combinations were built during the war, but they met with limited success. They were first flown in combat against the Allied invasion fleet during the Battle of Normandy, targeting the British-held harbour at Courseulles-sur-Mer.

While Mistel pilots claimed hits, none of these match Allied records; they may have been made against the hulk of the old French battleship Courbet, which had been included as a component of the Mulberry harbour at Arromanches and specially dressed up as a decoy by the Allies. Serious blast and shrapnel damage from a near-miss was suffered by HMS Nith, a floating headquarters, on 24 June. Nine men were killed and 26 wounded, and Nith was towed back to England for repairs.

A second opportunity to use the Mistels, in Scapa Flow in 1944, was abandoned after the sinking of the German battleship Tirpitz led to the departure of all of theRoyal Navy's major surface units from the target.

As part of Operation Iron Hammer in late 1943 and early 1944, Mistels were selected to carry out key raids against Soviet weapons-manufacturing facilities—specifically, electricity-generating power stations around Moscow and Gorky. These plants were known to be poorly defended by the Soviets and irreplaceable. However, before the plan could be implemented, the Red Army had entered Germany, and it was decided to use the Mistels against their bridgehead at Küstrininstead. On 12 April 1945, Mistels attacked the bridges being built there, but the damage caused was negligible and delayed the Soviet forces for only a day or two. Subsequent Mistel attacks on other bridges being thrown across the Oder were similarly ineffective.

This kit came in a large sturdy shrink-wrapped tray and lid type box. This box is blousy inside. It is 5 inches too long and 3 inches too wide, creating a letter L void. The height is okay.

The box art shows a Mistel 2 with the unmanned Ju-88. The combination of aircraft are both in overall light blue with tight patterns of a grey spot pattern and dark green propeller spinners. The Focke Wulfe just has a skeletal type black fuselage cross and no other markings. The Ju-88 has the fuselage code of a small black 4R + a large green P and a large black K. Neither has a swastika on the rudder (nor are there any swastika’s on the kit’s decal sheet). The short type hollow charge is on the nose of the Ju-88 and it is light green. Both aircraft carry drop tanks under their bellies. This Mistel is shown flying over a dam.

One side panel shows a full color side view of the model made up as a S2 trainer type with the Ju-88 being manned. It has the same scheme as the Ju-88 on the box art and also the same fuselage code. It is equipped with a long probe on the hollow charge explosive nose. Next to this is the history of the Mistel in Japanese, French, English, Italian, German and Chinese, each marked with a color illustration of the flag of the country that speaks those languages.

The other side panel has 5 color walk-around type photos of the model made up with either the short or the long hollow charge explosive nose. This is followed by a list of the features of the kit:

Fw-190F-8 has a modified machine gun (totally wrong. More about this later).

Next is CAUTIONS about the kit in the 6 languages. Marco Polo Import Inc’s street address in City of Industry, California is provided along with their fax number. Copyright of the kit is 1993 and the kit was made in China.

This kit contains 13 grey parts trees, 2 clear trees, 3 steel PE frets, the decal sheet and instructions. The grey and clear parts trees are in 9 sealed cello bags. The PE frets are in individual sealed cello bags with a stiff card in each to protect the fret from bending.

The instructions consist of a single sheet that is accordion folds out into 8 pages in 9 ½” x 16” page format.

Page 1 of the instructions begins with the history of the Mistel in the languages, followed by the parts trees illustrations. Some parts are shown here shaded out. This means they are excess and not needed to complete the model. The 1993 copyright date appears again and the ihstructions are said to have been printed in Hong Kong.

Page 2 begins with CAUTIONS about the kit in the 6 languages, a paint listing of Gunze Sangyo, Mr. Color and Italeri brands of hobby paints. The first 7 assembly steps are at the bottom of the page.

Page 3 through the top of page 7 give a grand total of 33 assembly steps.

Step 33 is just for joining the 2 aircraft together.

In step 32 you must opt for which of the 3 different hollow charge explosive noses you want on the Ju-88.

In step 7 there is a BIG MISTAKE!! You are directed to assemble part no L9 which is an oblique upward-firing pair of machine guns into the upper cowling panel. DML miss-interpreted a wartime photo of a Mistel that showed the top of a boarding ladder that was leaning behind the Mistel and interpreted it as being 2 gun barrels. Do not use this part as it is TOTALLY WRONG! 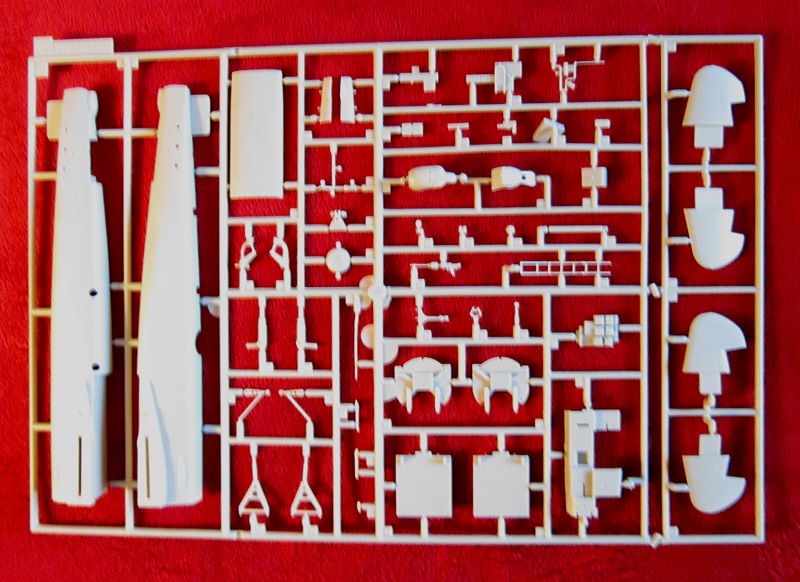 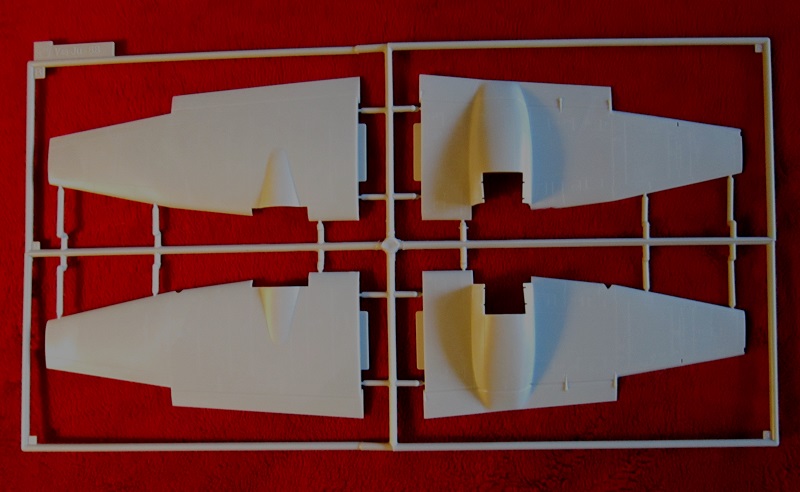 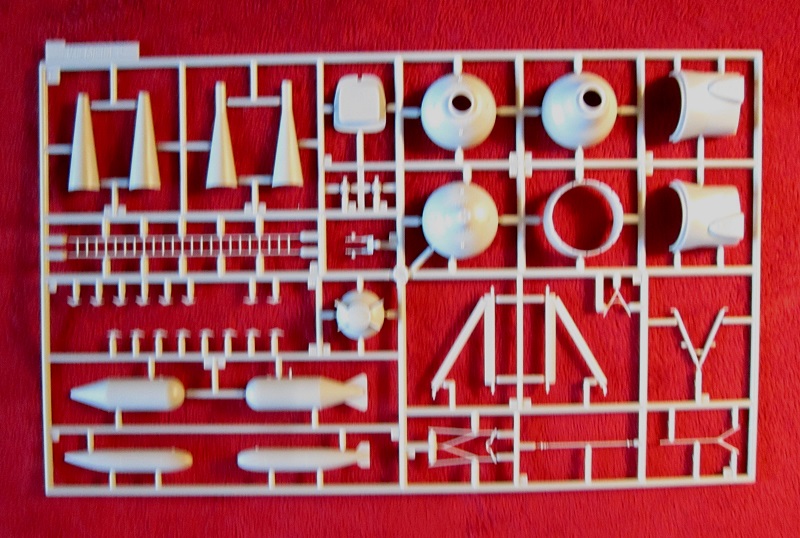 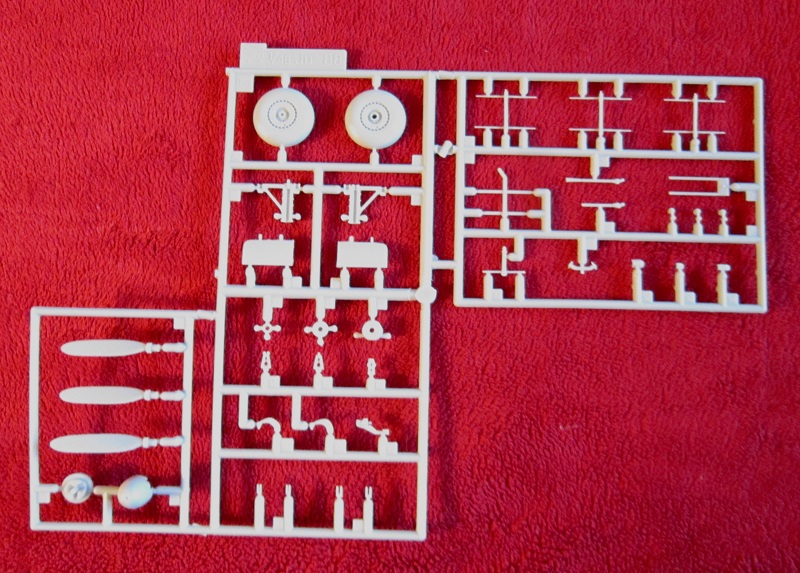 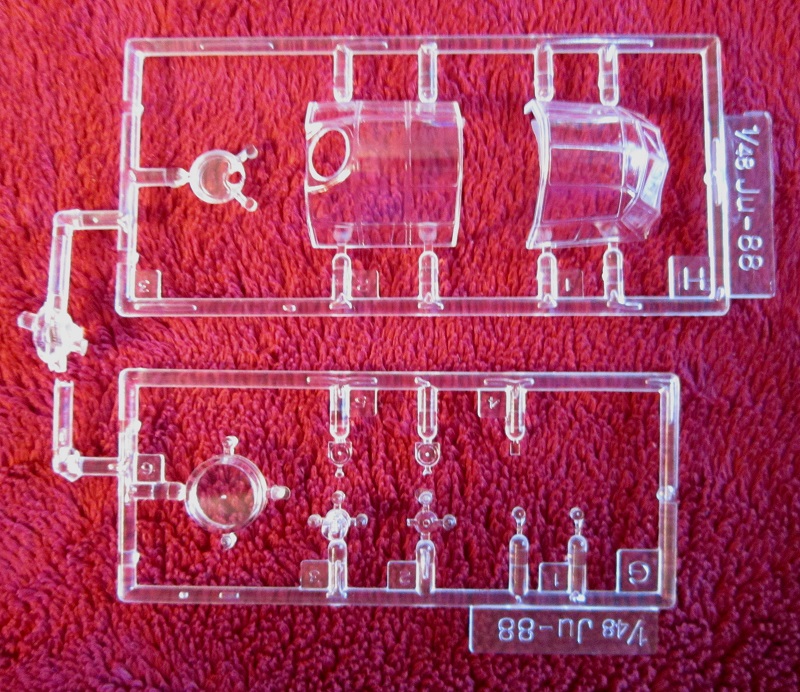 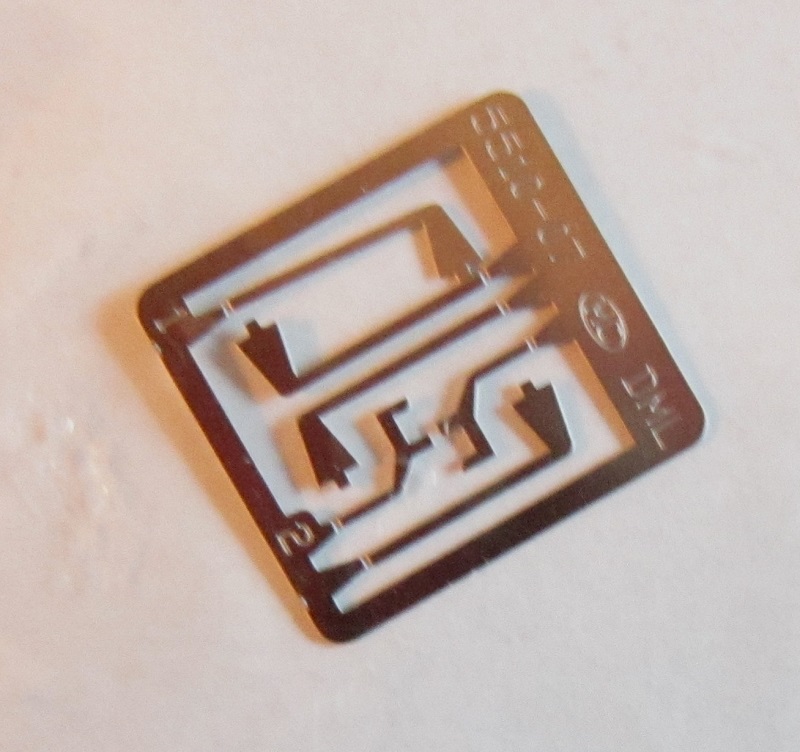 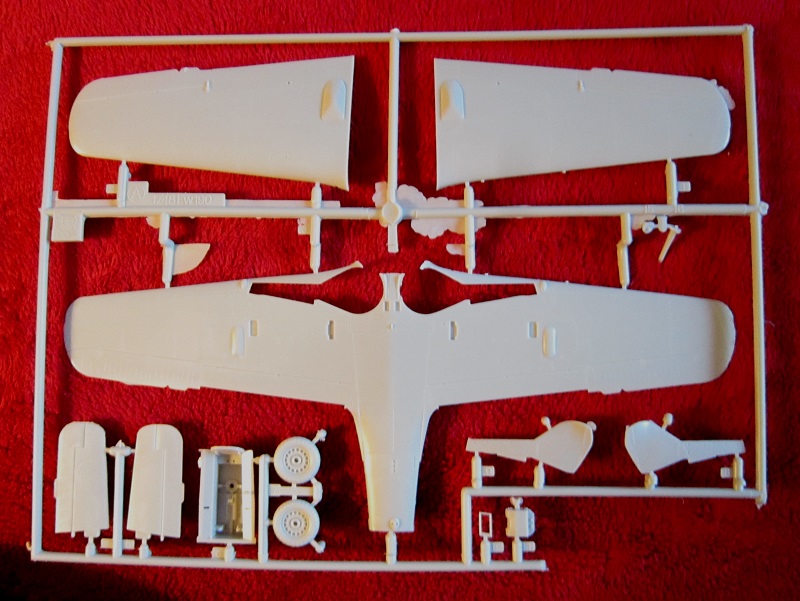 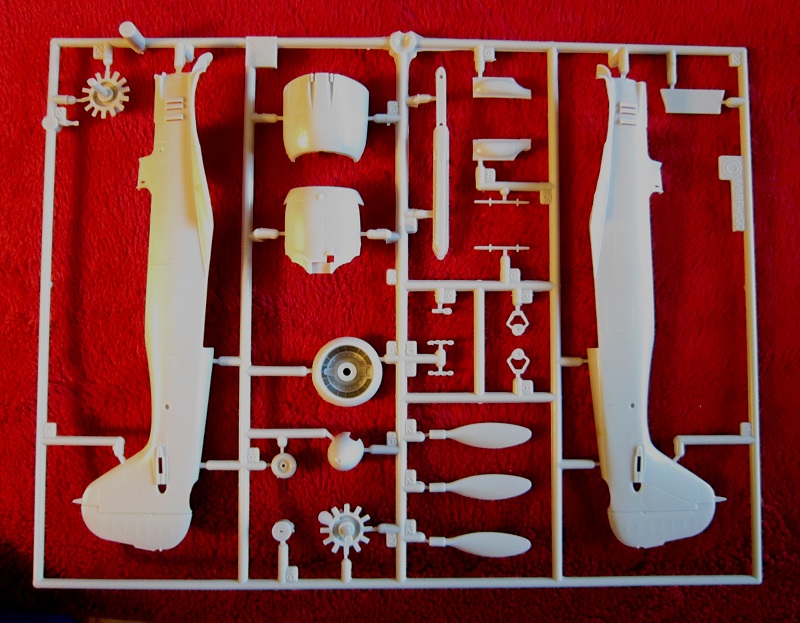 Grey letter E tree for the FW holds 2 upper wing machine gun compartment bulges.While Grey letter F tree is for the FW cowling If you look closely you will see two PIMPLES on top of the cowling. On the bottom of it are two corresponding cup marks to use to locate your drill to make holes through the part for the guns that are not used. You have to sand down the PIMPLES flush. I don't know if that will get into the cups below and create holes, but IF it does....putty will be needed. 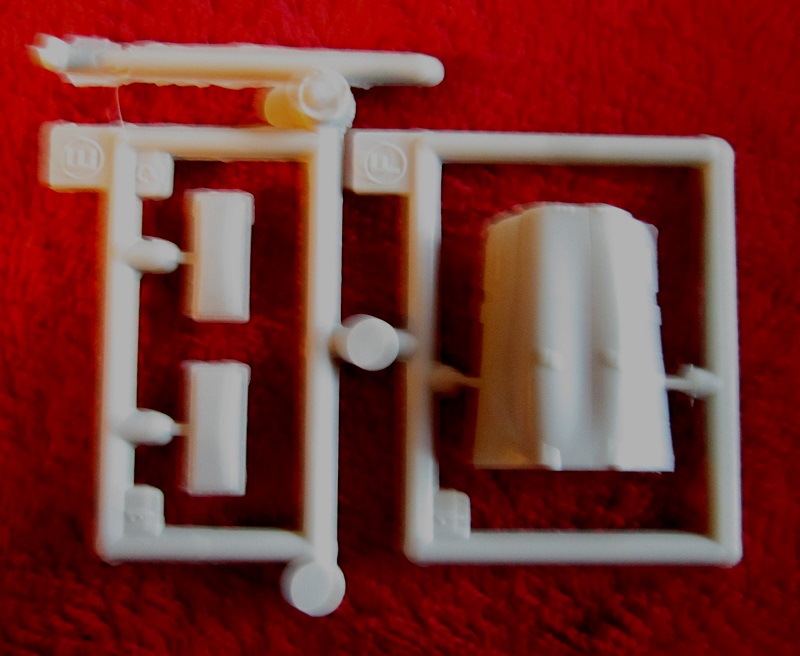 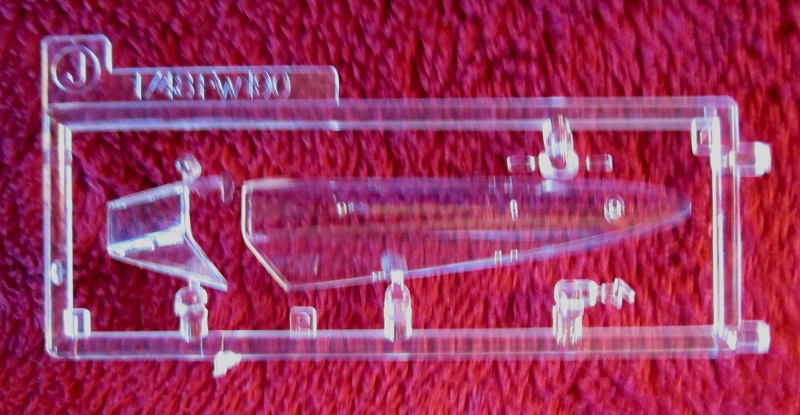 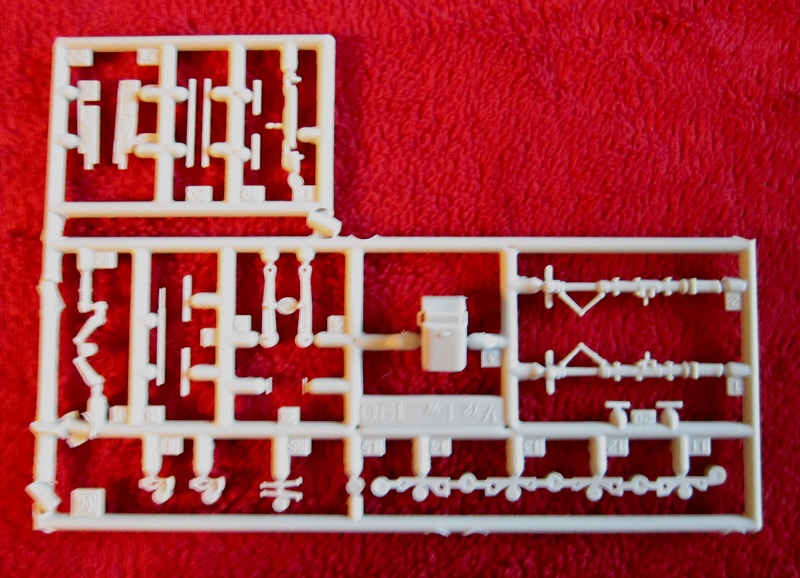 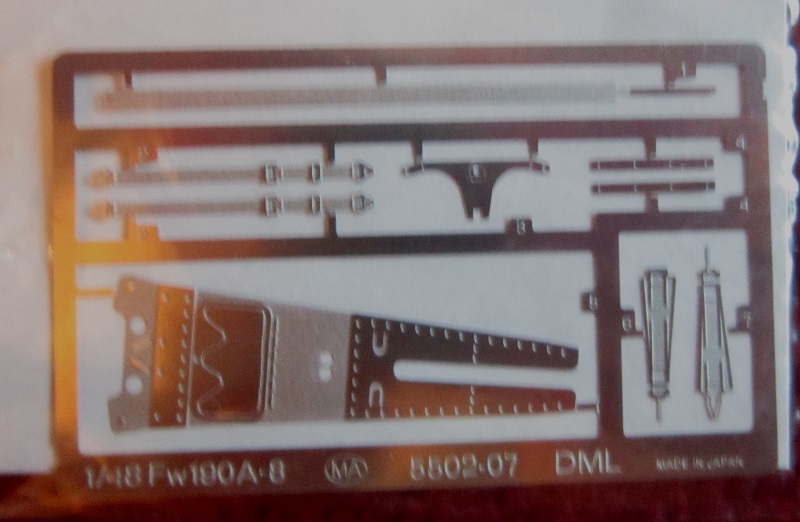 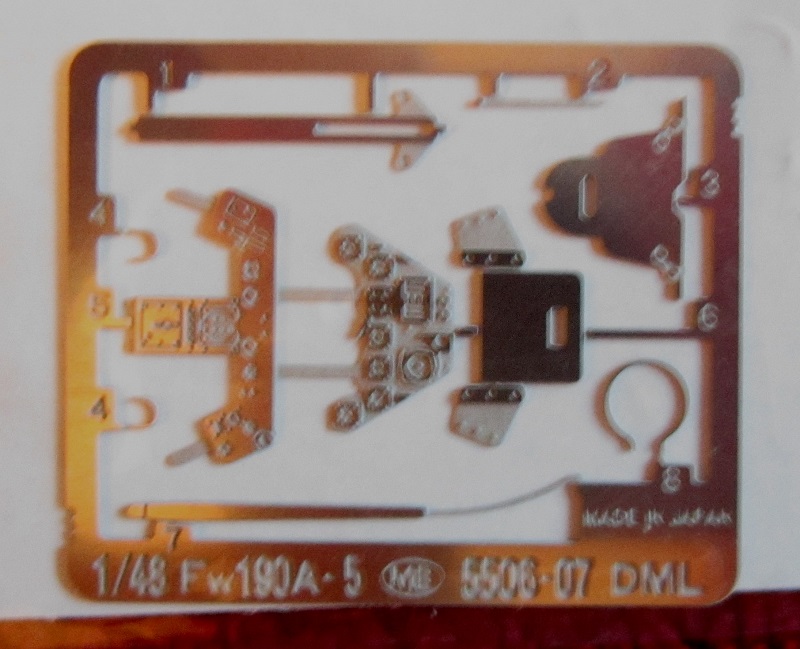 There are a multitude of stencil markings on the decal sheet. Unfortunatly, the marking scheme illustrations do not show you where these go on the 2 aircrafts. Bad move DML. 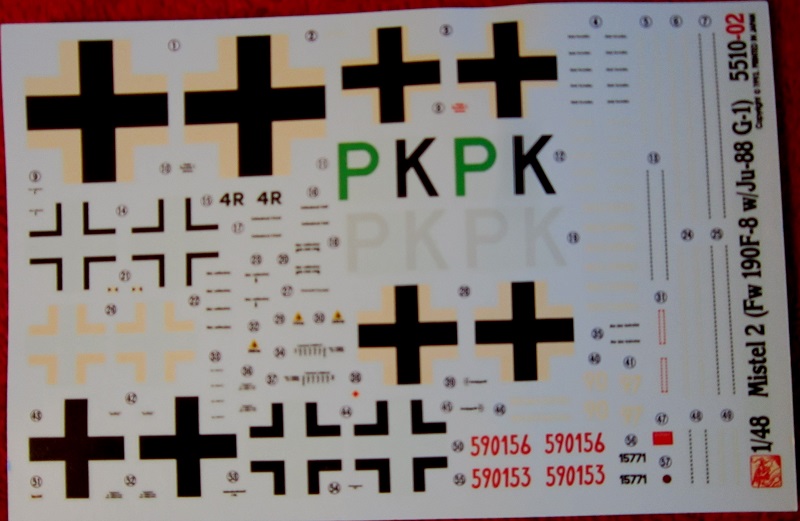 There are no crew figures in the kit and DML has kept the kit politically correct by not including any swastikas for the rudders of the 2 aircraft on the decal sheet or displaying that mark on the box art.

I won this kit years ago in a raffle at a IPMS contest I attended. It is now out of production, but I did find it listed at two places on the internet. One site had sold their kit and said it went for $101.00. The other site said the one they had was opened and partially assembled and priced at 40 bucks.

I highly recommend this kit to modelers that have previous experience with a model of this complexity.