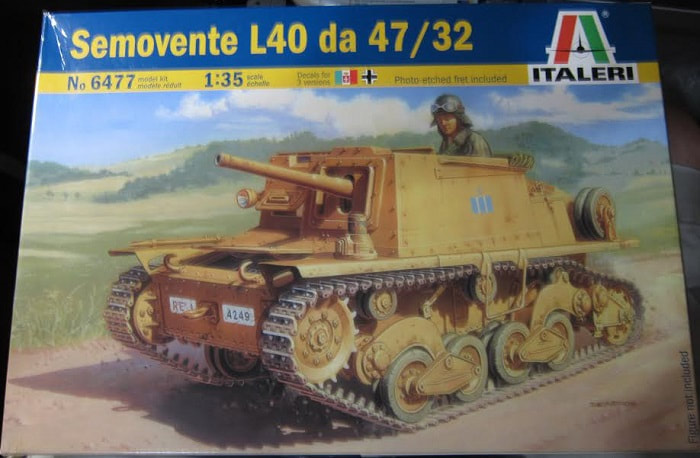 The Semovente L. 40 da 47/32 was an Italian self-propelled gun built during World War II. It was created by mounting a Cannone da 47/32 anti-tank gun in an open-topped, box-like superstructure on a L 6/40 light tank chassis.

Some were built as command tanks with a radio installed instead of the main gun. An 8 mm machine gun disguised as the 47 mm main gun was used on these versions to make them look like a regular Semovente 47/32s.

About 300 Semoventi da 47/32 were built from 1941 onward. The Semovente da 47/32 was the most heavily armed Italian armoured fighting vehicle used on the Eastern Front.

While the 47 mm gun was adequate for 1941, by the time the Semovente reached the field it was already outdated and ineffective against enemy medium tanks, and therefore the vehicle was not particularly successful.

After the Italian armistice in September 1943, the German Army took all Semovente 47/32s they could get hold of for their own use. The German designation was StuG L6 47/32 630(i).
Some of these were provided to Germany's Croatian puppet state and the Slovene Home Guard.

Italeri is an old prolific model company based in Italy. They make all manner of model subjects in the popular scales.

This kit comes in a  tray and lid type box that is not shrink-wrapped. Instead it is held shut with two circular pieces of scotch tape.

The box art shows a Semovente L40 da 47/32 moving down a dirt road. It is overall light-sand. It has a blue rectangle with two white vertical stripes on it on the sides of the hull. On the nose there is two white plates. The plate on the left has RE and some smaller marks on it. The plate on the right has 4249 on it.

This Semovente was with an unknown anti-tank unit, Sicily, early 1943.

The box art says there are decals in the kit for 3 versions and photo-etched fret.

This is followed by a one paragraph history of the tank in English and Italian marked with color illustrations of the flags of the UK and Italy, followed by 2 color profiles of the Semovente L40 da 47/32:

​1. With a German Unknown anti-partisan unit, Northern Italy, early 1944. It is in a base of earth yellow with splotches of red-brown and dark-green with a German cross on the sides of the hull. It has very large German cross on the rar of the hull and a white license plate with BE over 5282 on it and another white license plate on the front with just the numbers repeated..

2. With an unknown Italian anti-tank unit, Corsica, December 1942. It is overall Italian sand with a red rectangle with 2 white vertical stripes on it under a number 3. It has 2 white license plates on the front. The left one has RE and some smaller marks on it. The right one has the number 5720. The white plate on the left rear of the tank combines the markings RE and the number 5720 on it.

The other side panel begins with Italeri's web and street address in Italy and MADE IN ITALY. It says that glue and paint are not included, but decals and instructions are, in multiple languages, including English.

The kit is intended for collectors age 14 and older. It may vary from the box illustration.

Copyright date given for the kit is 2010.

Illustrations of all the kit parts is shown.

This kit contains 4 light-grey parts trees in 2 sealed cello bags, a brass PE fret and a clear sheet with die cut headlight lenses on it and the decal sheet in a stapled shut cello bag.

Page one has one-paragraph histories of the Amovente on it, in English, Italian, German, French, Spanish and Dutch.

The bottom of the page says the kit is for modelers 14 and older.

Page 2 begins with ATTENION instructions in the 6 languages, over the parts trees illustrations for the plastic trees and a symbol meaning to drill holes.

Page 3 begins with an illustration of the brass PE fret and a suggested listing of Model Master brand hobby paints.

Page 4 through 8 give a balance of a grand total of 13 assembly steps.

The bottom of page 8 has the decal application instructions in 9 languages, including English.

Page 9 has two 3-views on it. They are the Italian tanks at Corsica and Sicily (already described above).

Page 10 has another 3-view of the German anti-partisan unil vehicle in Northern Italy (also already described above).

At the bottom of the page is a coupon to mail to Italeri asking for any service needed with the kit.

One part is shaded out as being excess and not needed to complete the kit. 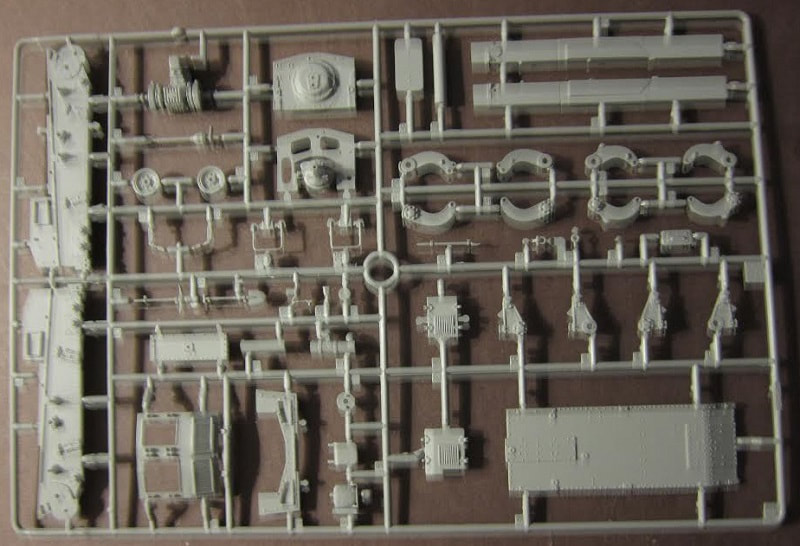 One part on just one of the 2 trees is shaded out. 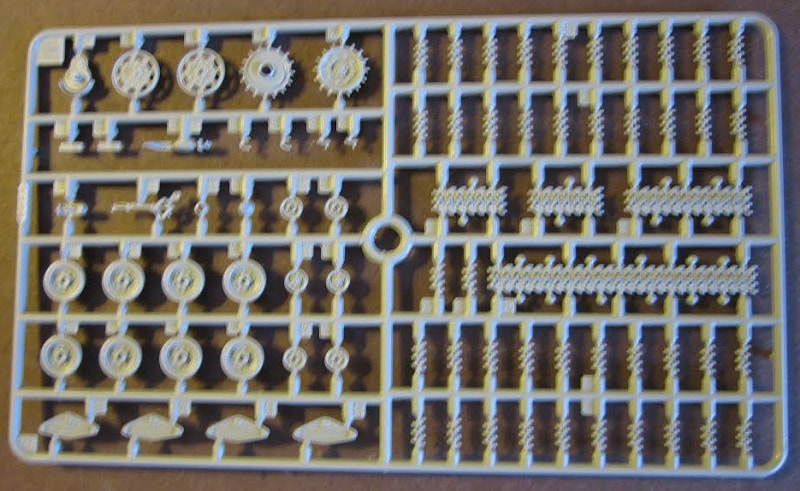 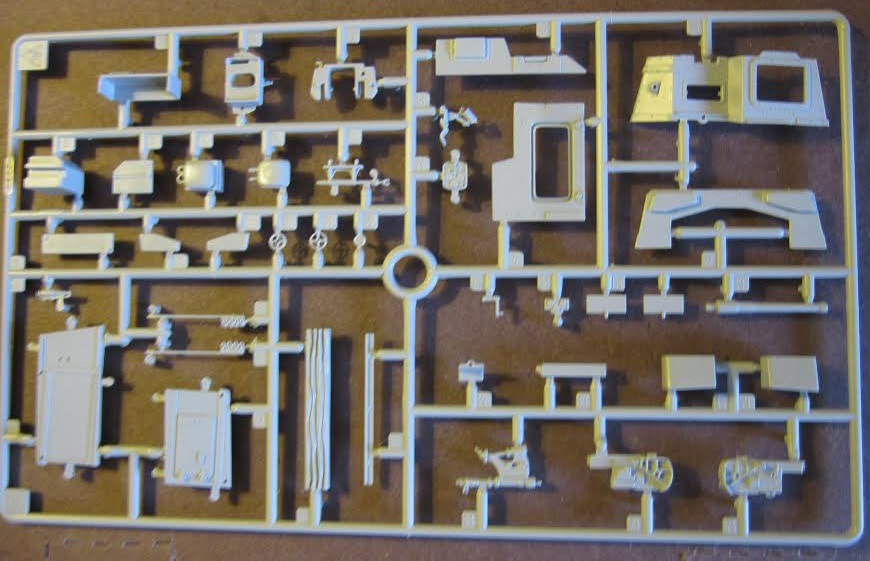 ​The die cut clear sheet has 2 headlight lenses covers on it. One is shaded out as being excess.
​I have several sets of MV brand reflector headlight lenses and will use one of those on this kit. 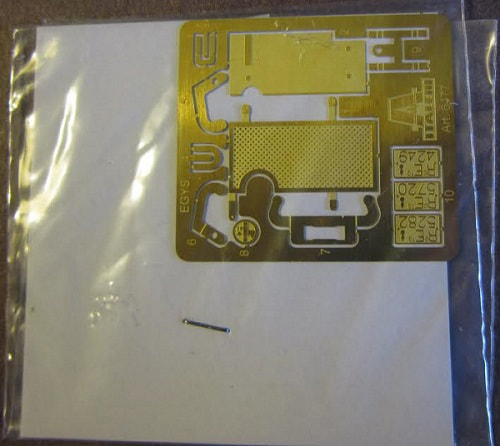 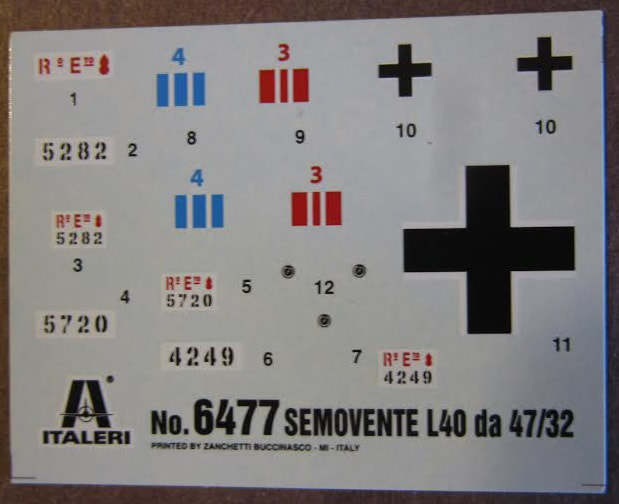 ​This is a very nicely detailed kit, both inside and out. I only wish it had a driver figure included.

The open top configuration of it cries for one.