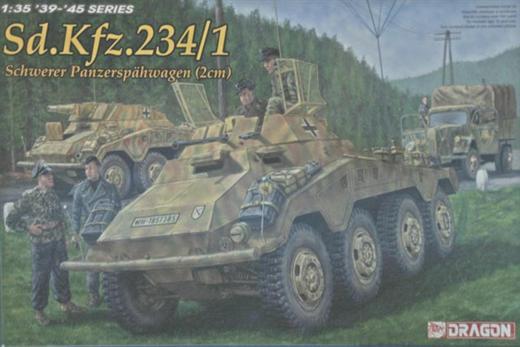 There were four main variants of the Sd.Kfz. 234:.

The box art shows a group of vehicles parked in a clearing. The vehicle in the forground is the Sd.Kfz. 234/1 (subject of this kit). Behind it is a Sd.Kfz. 234/2 “Puma” (that DML also markets a kit of) and a cargo truck. Two crewmen are dismounted and having a conversation with 2 crewmen in the turret of the Sd.Kfz. 234/1. All the vehicles are in a base coat of sand yellow with green and red-brown splotches. They all have a white shield with a black curve that has a black arrow over it forming a “X” pattern. The Sd.Kfz. 234/1 has the license no. WH-1851385.

The instructions say these are vehicles belonging to the 6th Panzer Division in Austria 1945. Here lies a problem. I cannot find this shield marking anywhere I’ve looked for the 6th Panzer Division. I found that their division marking was a yellow upside down “Y” with two dots to the right of it. I don’t know where DML came up with what they are showing?????

Side panels and the rear of box are absolutely covered with pictures of features of the kit. A copyright date of 2006 and DML Dragon’s street address in Hong Kong are shown.

The instructions complete the kit’s contents. It consists of a single sheet that accordion folds out into 10 pages in 8” x 13” page format.

Page 1 of the instructions begins with a black and white repeat of the box art, followed by the parts trees illustrations. Some parts are shown blued out. This means they are excess and not needed to complete the kit.

Page 2 begins with CAUTIONS in 6 languages, including English. This is followed by international assembly symbol explanations and a listing of paint colors suggested to use to complete the model. Hobby paint brands are called out for GSI Creos Corp., Aqueous Hobby Color, Mr. Color and Model Master.

At the bottom of the page is the first 2 assembly steps.

Pages 3 through 9 give a grand total of 28 assembly steps.

Page 10 is the painting and marking instructions. Two 5 views are shown. The first one is the box art subject already described above. The second one is in all white winter white wash with no markings shown at all. It is said to be a vehicle with the 25th Panzer Division, Germany 1945. However no marking for this unit is on the decal sheets. Bad move DML.

This is followed by the address of DML’s office in Graz, Austria. The copyright date of 2006 again and decal application instructions in 6 languages including English.

Light gray letter A part tree holds: the sides and roof of the hull. (3 parts) 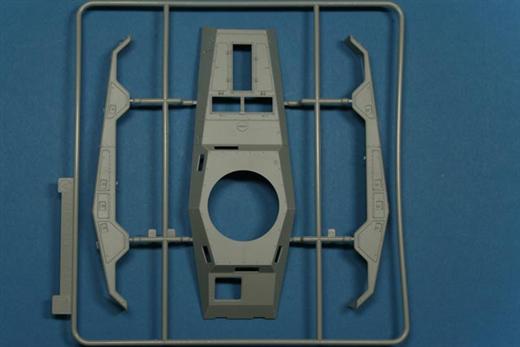 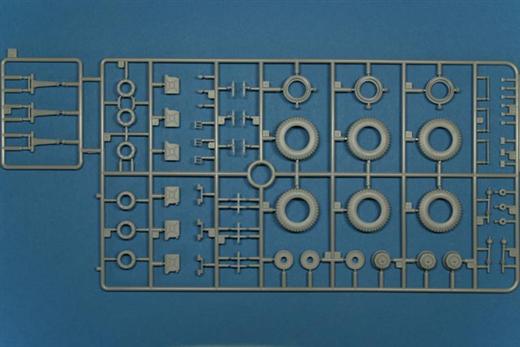 There are 2 identical light gray letter D trees. They each hold; the steering wheels, leaf springs and other small parts (43 parts) 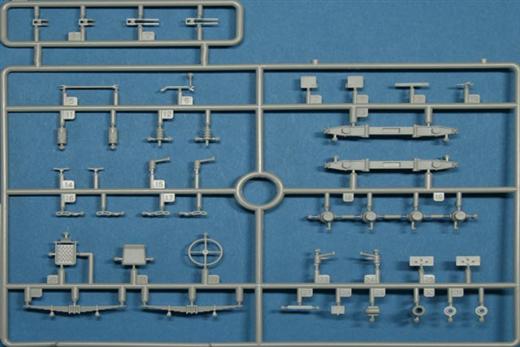 Light gray letter E tree holds numerous small parts that I am not going to attempt to name, because I will most likely get their description wrong. (82 parts) 11 are blued out on the parts illustrations as being excess. 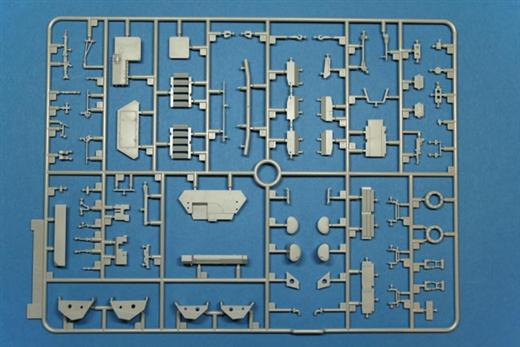 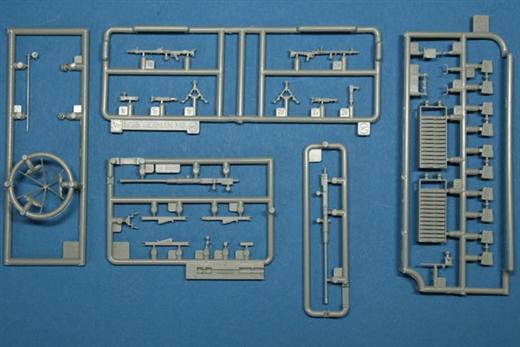 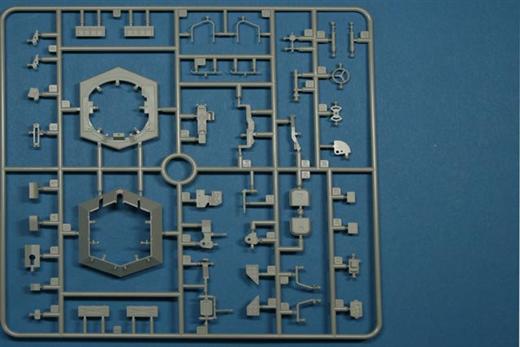 There is NO letter I tree.

Light gray letter J tree holds the gun barrels etc. (11 parts) One part is blued out in the parts trees illustrations as being excess.

Lettering of trees now jumps ahead to PE fret letter MA. It holds the anti-grenade screens that go atop the turret etc. (14 parts)

Letter MB is the second PE fret. It holds the center sections for the jerry cans.and an alternative crows foot antenna etc. (13 parts) 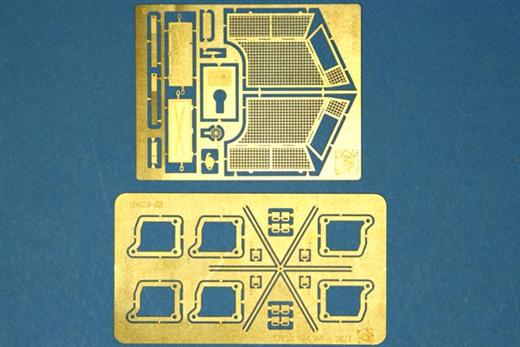 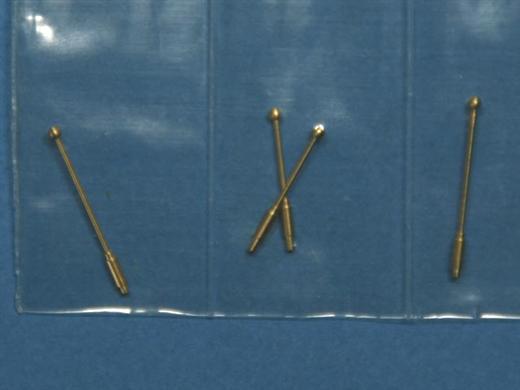 Lettering now jumps to light gray tree letter TF. I haven’t a clue right now as to what these parts are, but there are 10 of them on the tree. 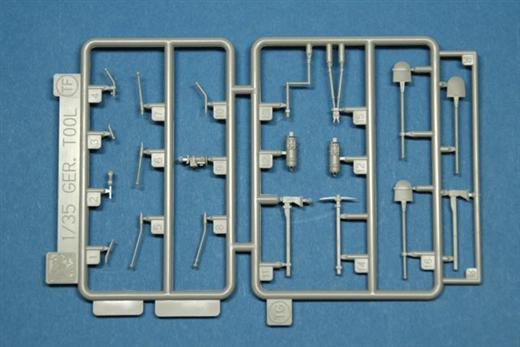 Light gray letter TH tree holds 14 parts and again I don’t know what they are. 4 of them are indicated as being excess.

There are 2 identical clear parts trees. Each holds 6 parts.

Light gray letter WC tree holds machine guns and their bipods etc. (8 parts) 4 parts are blued out as being excess.

There are 2 decal sheets in the kit. One holds the markings for the what is supposed to be the 6th Panzer Division. Which, as I said earlier I don’t agree with. The second sheet is covered with numbers and license plates to choose from. 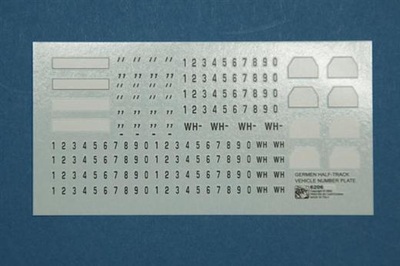 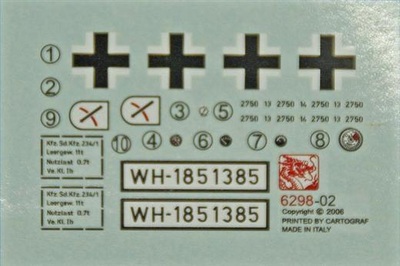 This kit is recommended highly to modelers of advanced building skills that have tackled other kits of this complexity.

I purchased my kit at a shop that was overloaded with model kits that just were not moving for them. So, they marked 90% of them down by half price. Nice to get a bargain once in a while.