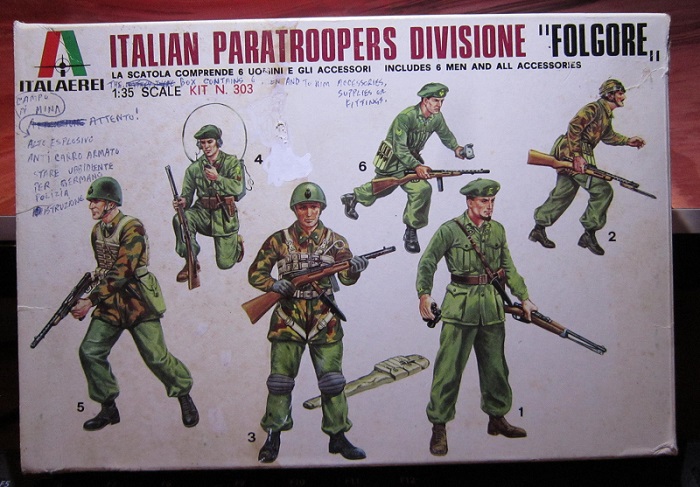 The “Folgore” Parachute Division, which was founded in September 1941 at Tarquinia Italy, was one of the crack units of the Italian army during WWII. The reason for it’s formation was Operation “C3”, the code name for the invasion of Malta by airborne troops. It was soon realized that Malta would remain an impregnable fortress and the Folgore Division was sent to Africa, where, together with the Brescia and Pavla Divisions they formed the X Army Corps.

The folgore Division consisted of the following three regiments, the 185th Artillery and the 186th and 187th Infantry. During the days of El Alamein, the Folgore Division occupied the southern flank of the depression of El Qattara on their right, and in this position they managed to repel the British attacks. When the Ital-German front began to break, these parachutists were forced to retreat, hand-hauling their artillery with them, under continuous fire from the British artillery and armor.

The hardships of the Folgore Division were over at 1:30 p.m. on November 6th, 1942, after 10 days of continuous fighting. Having used all their ammunition, the survivors of the division, consisting of 32 officers and 272 men, most of whom were wounded, paraded with their weapons and presented themselves to the commander of the 187th Regiment. All this happened under the eyes of the enemy, who – having ceased fire, approached to watch this unbelievable happening.

Italeri is a prolific model company based in Italy. They manufacture all manner of model subjects in the popular scales.  I’m  pretty sure this kit dates back to the 70’s when Italeri spelled their name differently on their boxes. Back then it was ITALAEREI.

This kit came in a shrink-wrapped end opening type box. I am no fan of this type of box. Parts have a way of getting past the end flaps to become lost. Give me a tray and lid type box any day of the week.

The box art shows 6 Italian paratroopers posed against an all white background, similar to the way that Tamiya does their box arts. Two are wearing steel helmets. All are in desert uniforms. One has a leather helmet and 3 are wearing berets. One has rubber knee pads on. Five are infantrymen and one is an officer. He is holding a rifle and a pair of binoculars. The four standing infantrymen all have machine guns of 2 different types. The 6th infantryman is kneeling and operating a field radio that has a large loop antenna.

One side panel of the box has the history of the Folgore Division in Italian and English.

The other side panel has line drawings of the field radio and other field gear.

The back of the box has color illustrations of uniform insignias, the steel helmet and the leather one and the beret. A European Theatre and a African Theatre blouse are shown also. These insignia are all identified in Italian. However, someone translated the captions and wrote what they are in English with a pen. 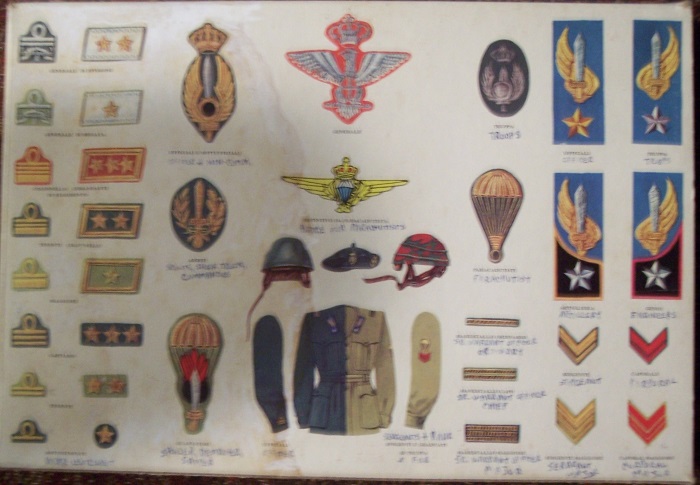 Down the left side are sleeve and shoulder insignia for:

Down the next row are helmet and hat insignia for:

Down the center are shown:

A metal hat insignia for Generals

A jacket that is divided in half. The left side is for officers and the right is for sergeants and rank and file.

The next row has sleeve insignia for:

The last row down the right shows collar insignia for:

The kit consists of 2 chalk white trees of parts in a cello bag. There are no instructions, so modelers will have to wing it and put the parts together by GUESS AND BY GOLLY. Bad move Italeri. 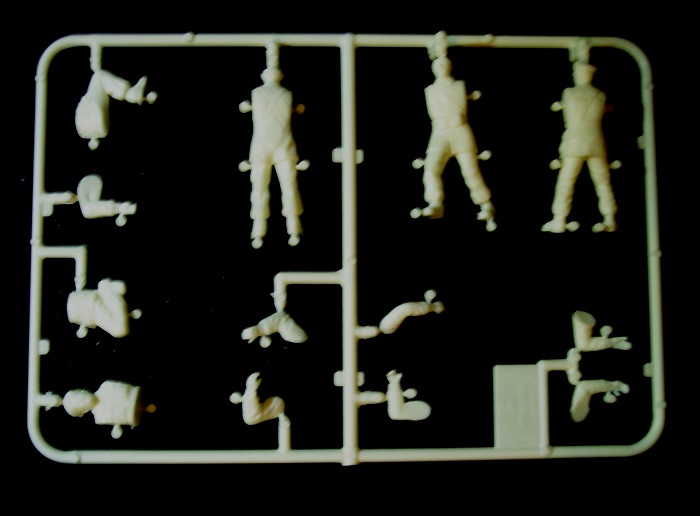 The second tree has the remaining 2 figures on it. They are divided into separate torso, lower body and arms. There are 3 machine guns and 2 rifles, 3 steel helmets, the field radio parts, a rifle in a pouch, 2 pistol holsters, ammo pouches, a pair of binoculars, a pair of head phones and bayonets on this tree also. (49 parts) 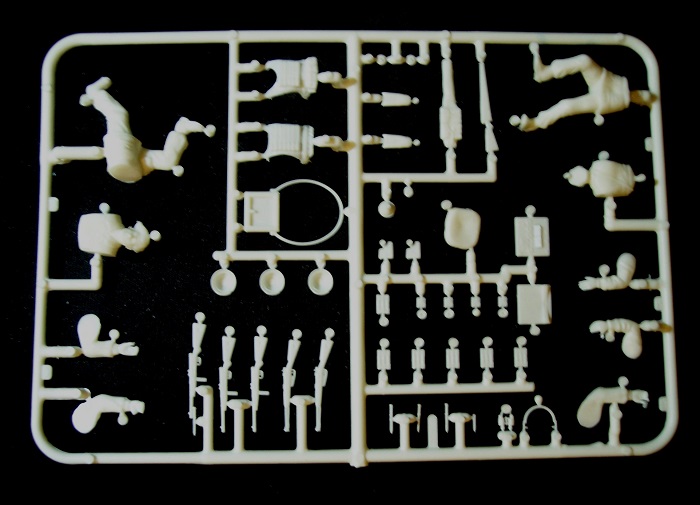 There are no decals in the kit. Some would have been nice to do the uniform insignia etc. that are shown on the back of the box.

I purchased my kit form a vendor at a IPMS contest for a mere 2 bucks. The box is pretty beat up and may at one time had an instruction sheet. Who knows?

I’ve been told that this kit is AT LEAST 35 years old! That would put it’s release date around 1978. It is long out of production (OOP). However, all is not lost on the subject of this kit. Italeri has since done a new kit of Italian paratroopers. It is kit no.6492. It has 6 figures in it also and costs $24.95. The poses of the figures is all different and it includes a heavy machine gun on a tripod mount.

I only found my kit at one vendor on eBay, but the new kit is readily available.

I recommend these paratroopers to modelers of average skill. They are a welcome relief from all the German figures. Other than these and Italeri’s old kit of Italian “Bersaglieri” figures which I have, I know of no other kits of Italian WWII soldiers.