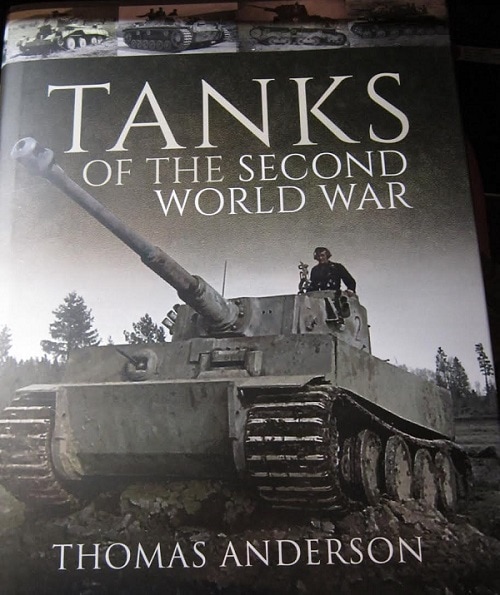 Pen & Sword is located in the U.K.

This book is hard-back of 219 pages (this includes 9 pages that are totally blank). The description on Casemate' s site says 256 pages which is wrong.

There are 306 black and white photos in the book, which include the ones on the front and back of the paper cover sleeve on the book.

Tank Warfare
Generals: The Armoured Vehicle Over the Millenia
The Inter-war Period
Tanks in Action, the 1930's
Prospect: The Long Road to the Main Battle Tank
Bibliography

The large black and white photo on the back of the paper jacket shows a U.S. Stuart tank from the front.

This book lists all the important tanks used in WWII, both by the Allies (England, France, Russia and the USA) and Axis powers (Germany, Italy and Japan).

Thomas Anderson, an expert on the history of the Second World War, offers an in-depth volume detailing the vehicles, their use in battle and relevant technical specifications.

This comprehensive survey is full of authentic eye-witness accounts as well as being profusely illustrated with many photos having never been published before.

There are 62 data lists in the book, each detailing a particular tank.

There are charts that call out the penatrive power, engine weight ratio, armour and speed comparisons of:

The first photo in the book spans two pages it shows a German Pz.Kpfw. IV Ausf G leading a Sd.Kfz. 263 halftrack down a snow covered road. Bother are covered with winter white wash.

The photo coverage in the book is very extensive and shows all the tanks used by the different countries in WWII and also even in the earlier Spanish Civil War.

This book will be of great interest to military enthusiasts and historians as well as modelers.