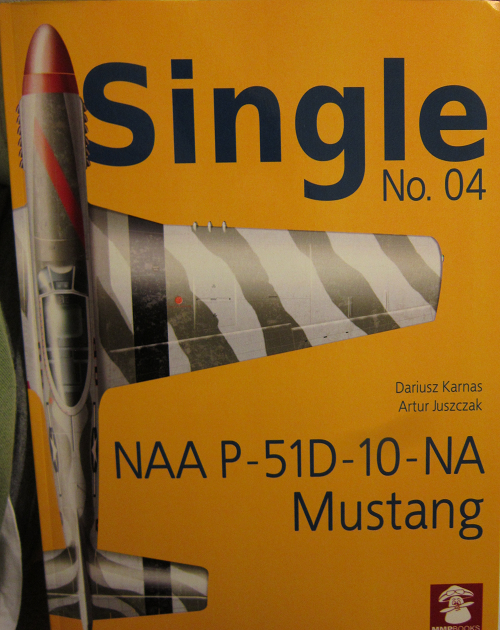 Following combat experience the P-51D series introduced a "teardrop", or "bubble", canopy to rectify problems with poor visibility to the rear of the aircraft.
In America, new moulding techniques had been developed to form streamlined nose transparencies for bombers. North American designed a new streamlined plexiglass canopy for the P-51B which was later developed into the teardrop shaped bubble canopy.

In late 1942, the tenth production P-51B-1-NA was removed from the assembly lines. From the windshield aft the fuselage was redesigned by cutting down the rear fuselage formers to the same height as those forward of the cockpit; the new shape faired in to the vertical tail unit.

A new simpler style of windscreen, with an angled bullet-resistant windscreen mounted on two flat side pieces improved the forward view while the new canopy resulted in exceptional all-round visibility. Wind tunnel tests of a wooden model confirmed that the aerodynamics were sound.

The new model Mustang also had a redesigned wing; alterations to the undercarriage up-locks and inner-door retracting mechanisms meant that there was an additional fillet added forward of each of the wheel bays, increasing the wing area and creating a distinctive "kink" at the wing root's leading edges.
Most significant was a deepening of the wing to allow the guns to be mounted upright, resulting in a slightly reduced maximum speed compared to P-51B/C variants.

A P-51D-5-NA, assigned to Lieutenant Abe P. Rosenberger. with the "kinked" wing root leading edge and the added fin fillet on the tail present. This aircraft is famous in photos as one of "The Bottisham Four."

Other alterations to the wings included new navigation lights, mounted on the wingtips, rather than the smaller lights above and below the wings of the earlier Mustangs, and retractable landing lights which were mounted at the back of the wheel wells; these replaced the lights which had been formerly mounted in the wing leading edges.

The engine was the Packard V-1650-7, a licence-built version of the Rolls-Royce Merlin 60 series, fitted with a two-stage, two-speed supercharger.
The armament was increased with the addition of two more .50 in (12.7 mm) AN/M2 "light-barrel" M2 Browning machine guns, the standard heavy-calibre machine gun used throughout the American air services of World War II, bringing the total to six.

The inner pair of machine guns had 400 rpg, and the others had 270 rpg, for a total of 1,880. The aforementioned -B/C subtypes' thinner wings forced the M2 guns' mounts to be axially tilted, to allow the guns to have access to the feed chutes from the ammunition trays.

This angled mounting had caused problems with the ammunition feed and with spent casings and links failing to clear the gun-chutes, leading to frequent complaints that the guns jammed during combat maneuvers.

The new arrangement allowed the M2s to be mounted upright, remedying most of the jamming problems. In addition the weapons were installed along the line of the wing's dihedral, rather than parallel to the ground line as in the earlier Mustangs.

The gunsight was changed from the N-3B to the N-9 before the introduction in September 1944 of the K-14 or K-14A gyro-computing sight.

Apart from these changes, the P-51D and K series retained V-1650-7 engine used in the majority of the P-51B/C series.

The addition of the 85 US gallon (322 l) fuselage fuel tank, coupled with the reduction in area of the new rear fuselage, exacerbated the handling problems already experienced with the B/C series when fitted with the tank, and led to the same fillet being added to -B, -C and initial -D-series versions in the field, to be quickly standardized as a normal rear-fuselage airframe component on later production blocks of the -D version.

The P-51D became the most widely produced variant of the Mustang.
A Dallas-built version of the P-51D, designated the P-51K, was equipped with an 11 ft (3.4 m) diameter Aeroproducts propeller in place of the 11.2 ft (3.4 m) Hamilton Standard propeller.

The hollow-bladed Aeroproducts propeller was unreliable, due to manufacturing problems, with dangerous vibrations at full throttle and was eventually replaced by the Hamilton Standard.

By the time of the Korean War, most F-51s were equipped with "uncuffed" Hamilton Standard propellers with wider, blunt-tipped blades.

The photo reconnaissance versions of the P-51D and P-51K were designated F-6D and F-6K respectively. The RAF assigned the name Mustang Mk IV to the P-51D model and Mustang Mk IVA to P-51K models.

The P-51D/P-51K started arriving in Europe in mid-1944 and quickly became the primary USAAF fighter in the theater.

It was produced in larger numbers than any other Mustang variant.

Nevertheless, by the end of the war, roughly half of all operational Mustangs were still P-51B or P-51C models.

Mushroom Model Publications (MMP) is based in the UK. All their books are printed by  their associate Stratus in Poland in the English language.

The cover is bright yellow with a color illustration of the top of a P-51D-10-NA.
The aircraft is overall bare-metal with a olive-drab anti-glare panel in front of the windshield and olive-drab wavy bands on the wing tops, tail and fuselage. Fuselage code is QP star A in black outlined in red.

There are D.Day invasion stripes in black and white under the wings and under the rear of the fuselage. On the left side of the nose is the slogan "Man O War" in red.

It was with the 4th Fighter Group, 8th Air Force, England, September 1944 and flown by Lt. Col. Clailborn H. Kinnard Jr. with 16 victories.

The left wing of the cover art aircraft is bent around the book and partially on the back cover.

The book has 6 1/72nd scale line drawings of the P-51D including illustrations of the bulkheads inside the fuselage.

There are also 4 1/48th scale line drawings of the P-51D, also with illustrations of the bulkheads.

Included is 3 color photos of the cockpit interior and a color illustration of the dashboard with a list of the names of all the instruments shown.

There are 13 illustrations out of a maintenance manual with the names of the things shown.

This is one great book. Highly recommended.