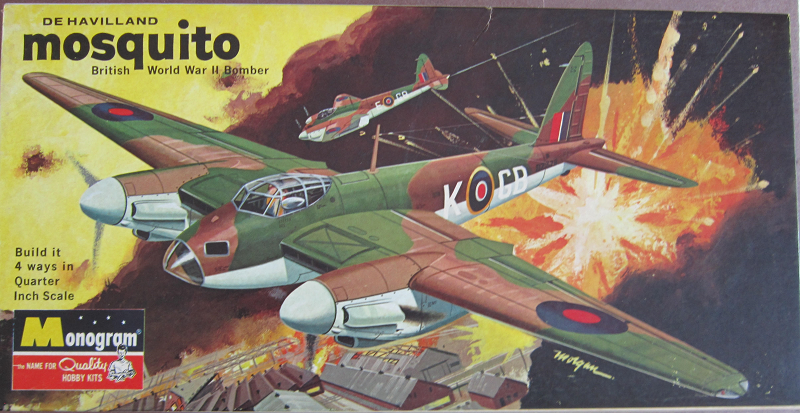 First conceived in 1938, as a high speed bomber capable of out-performing the contemporary fighters of the day, the DeHavilland Mosquito became one of the most versatile military aircraft to come out of WWII. It was produced in bomber, fighter-bomber, night fighter and photo-reconnaissance configurations.

The fist Mosquito prototype was flight tested November 25, 1940, just under 11 months from the time detail design work commenced. The first fighter and photo-recon. prototypes followed on May 15 and June 10, 1941, respectively.

The use of wood in the construction of this aircraft not only reduced construction time, but also made use of the relatively untapped wood working industry in wartime England. The light weight of the wood structure contributed to the excellent power to weight ratio.

The fuselage skin employed balsa sandwiched between two layers of plywood. The one-piece wing was covered with plywood reinforced with fir stringers. Metal construction was used for the engine nacelles, wheel doors, ailerons and elevators. The airplane because of it's great speed flew it's many missions virtually unopposed until the end of the war.

It's exploits are legendary. These include the tree-top level bombing of the Gestapo Headquarters in Oslo,Norway, the carefully planned interruption of a speech by Reichsmarshall Goering in Berlin and night fighter escort of R.A.F. bombers to mention but a few of it's many roles.

This model was designed from photos and measurements of actual Mosquito and the assistance of R.G. Moulten who furnished Monogram with data, all of which enabled Monogram to make this model accurate.

The kit includes all of the parts necessary for assembling any one of 4 versions of this famous fighter.

The box art shows 2 Mosquito Mk. IV Day Bombers bombing a factory. Both are in a wave pattern of dark-green and brown over light-gray undercarriage.

The Mosquito in the foreground has a fuselage code of white K roundel GB, with a tricolor on the rudder.

The Mosquito in the background is in the same color scheme. It has a white fuselage code E roundel GB.

One side panel has 4 color profiles of Mosquito variants:

​Kit can be built in one of these schemes with gear up or down.

The other side panel has small color illustrations of the rockets, bombs, slipper tanks and radar antennas, followed by a color head-on illustration of a Mosquito.

​Features listed are: bomb bay doors and landing gear can be constructed in open or closed position. Authentic matte finish decals, detailed scale figures of 2 man crew in authentic R.A.F. uniforms and Monogram's address and MADE IN THE USA.
​WHAT'S IN THE BOX:

The kit holds medium-gray parts that have broken off of what's left of the trees,

2 jet-black trees, a clear tree, decal sheet and the instructions. Parts are not cello bagged, alphabetized or illustrated in the instructions, yet do have part number tabs next to the parts on the trees.

The instructions consists of a single sheet that accordion-folds out into 6 pages in 8 1/2" x 11" page format.

Page 1 has black and white photos of the 4 versions made up, with the history of the Mosquito over the 1965 copyright date and Monogram's address in Morton Grove, IL.

Page 2 through to the top of page 5 give a grand total of 8 assembly steps.
The bottom of page 5 has painting instructions as text only.

Page 6 has a 2-view of the box art scheme and the other 3 schemes as profiles (already described above).

It is said here that the box art scheme was with 105 Sqdn.

The one with fuse code VP roundel A was with 33rd Sqdn.

The one with fuse code TE roundel G was with 487th Sqdn.

The jet-black variant was with Home Defense.

For the 1st medium-gray part tree there are: a crewman, wing flap hinges, gear legs and one elevator half, foot pedals, a wing half and machine gun nose. (20 parts still on a tree) 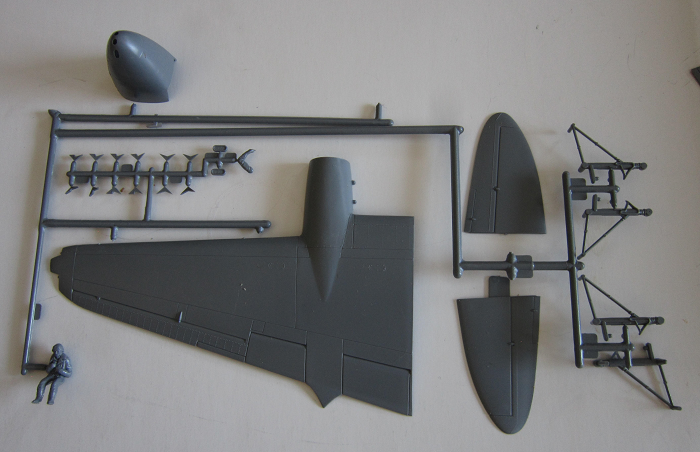 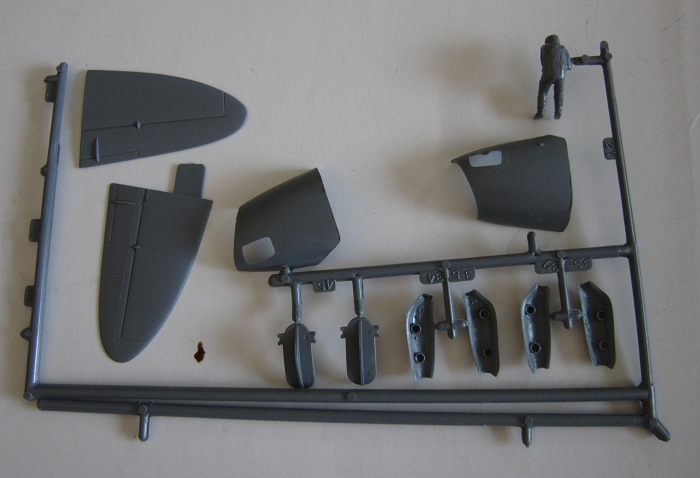 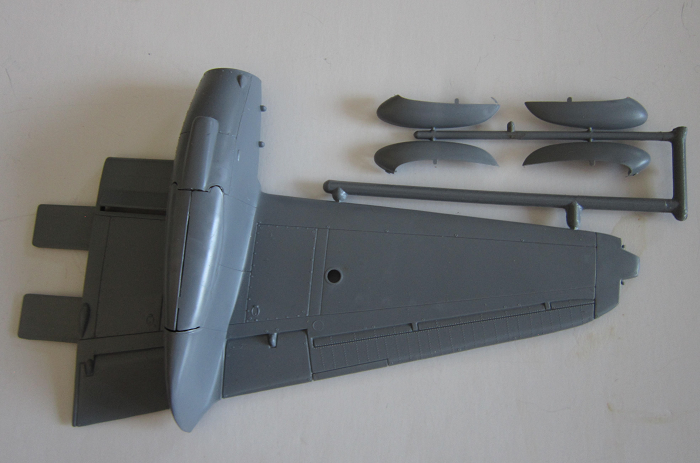 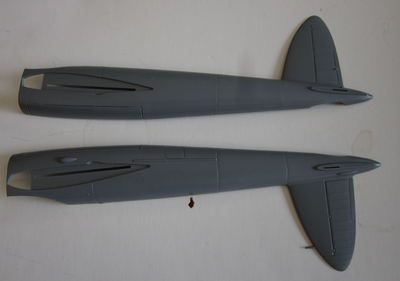 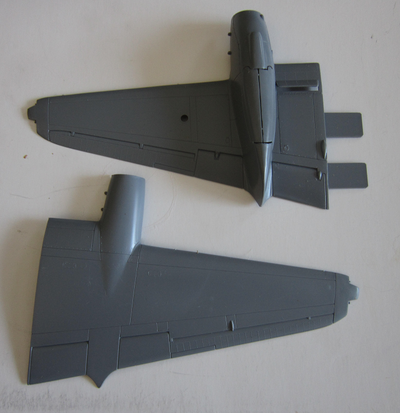 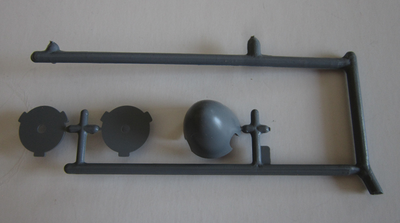 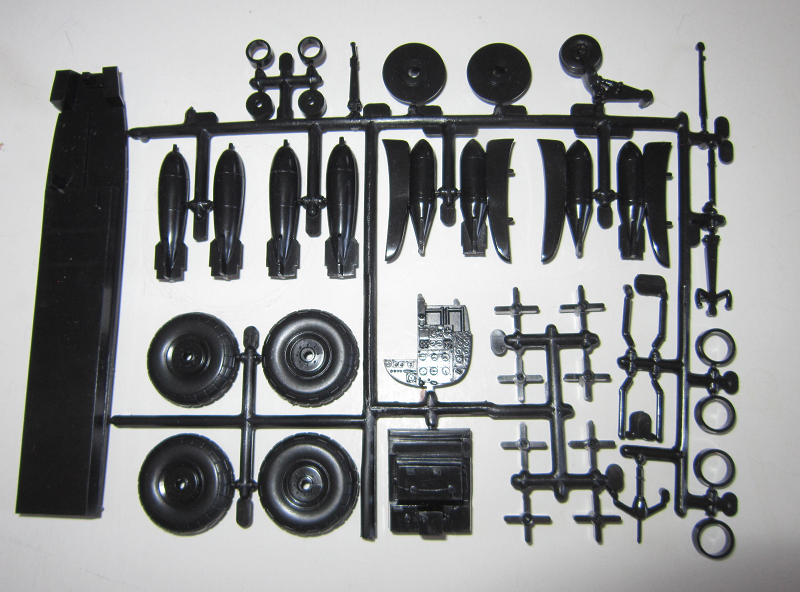 ​The second jet-black tree holds: more seats, propellers, rockets with their railings (20 parts) The propellers have broken off the tree. 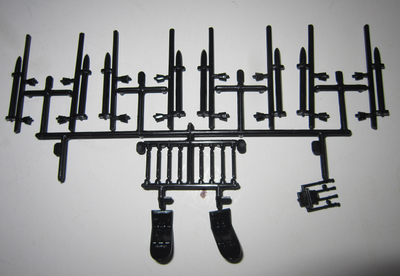 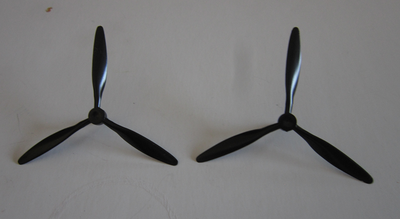 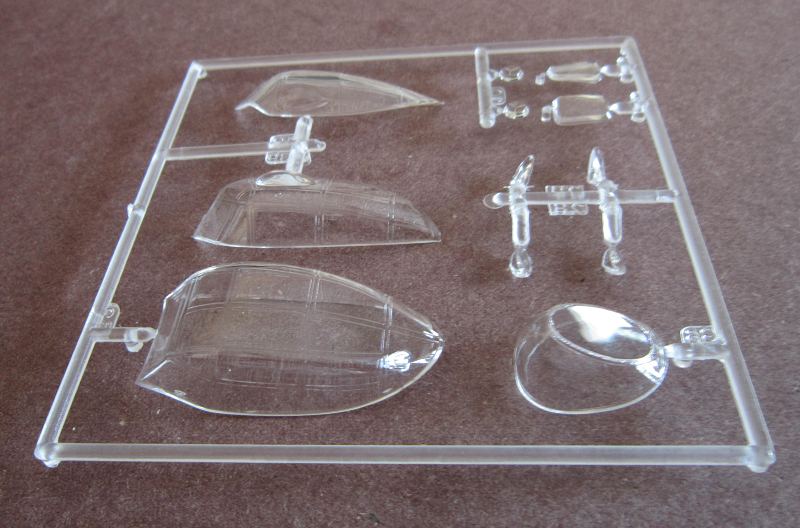 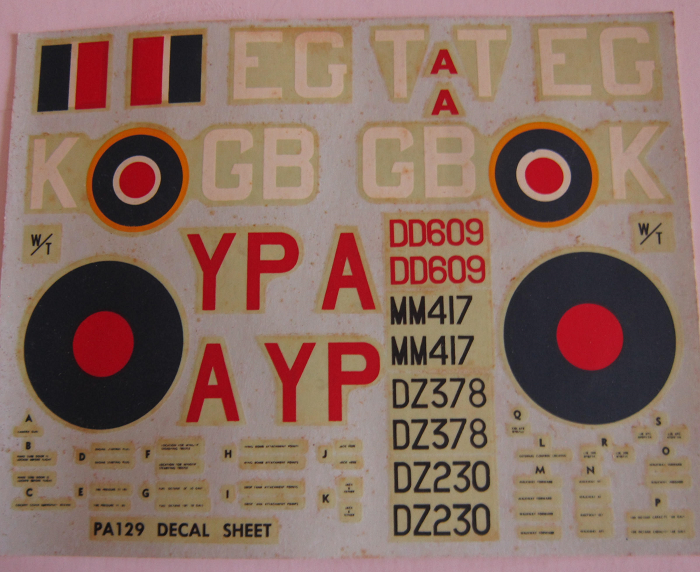 Only gripe was all the broken off parts.
Recommended.