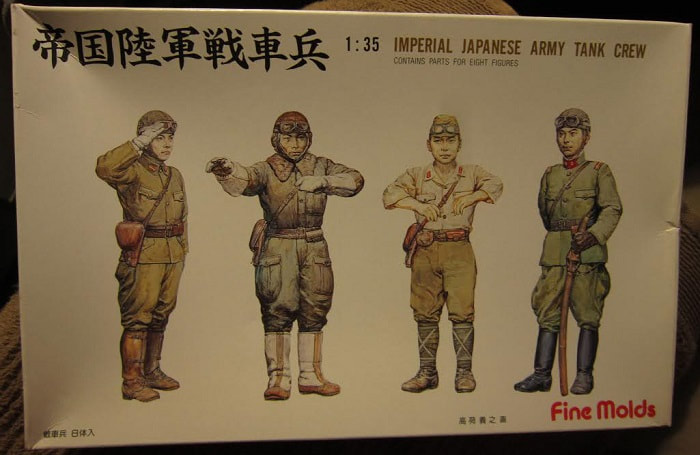 Hasegawa Fine Molds is based in Japan. They are a prolific older company that makes many subjects in the popular scales.

This kit came in a shrink-wrapped end-opening type box. I am no fan of this type of box, because invariably parts or the decal sheet find their way past one of the lend flaps to become lost forever. Give me a tray and lid type box any day of the week.

The box art show 4 Japanese tank crewmen posed against an all white background. Three of them wear leather tanker's helmets and the fourth guy has a soft cloth hat with a bill. All 4 men wear goggles on their helmets..

Colors of their uniforms are called out in Japanese only.

The first guy on the left is saluting. He wears a blouse and pants in what appears to be khaki. His pants are bloused over his shoes with leather puties held shut with straps. He has a pistol holster strung over his chest with a strap.

The next crewman to the right wears what looks like a winter pair of coveralls with heavy white gloves and a fur collar. There are large pockets on the legs of the coveralls. He is holding his arms out in front of him. He wears white puties over his shoes. He too has a pistol holster on his belt.

The third man to his right wears the billed cloth hat and a light tan short-sleeved shirt over khakit pants. He has his pants tucked into putties that are held on with straps over his low shoes. Has a pistol holster on his belt and some small pouches.

The fourth and last man appears to be an officer. He is wearing a khaki blouse over jodpher pants and high black jack boots. He has one arm behind his back and is holding a samauri sword in his other hand. He too has a pistol holster.

The bottom of the box serves as the assembly and painting instructions with four 2-views of each of the figures showing their front and backs. The text around them is all in Japanese unfortunately.

The arms in the kit can be switched around creating more than just the 4 poses shown.

Japanese tank crews usually consisted of 4 men. With the 8 figures in the box you can do 2 crews.

One side panel has color illustrations of uniform insignia, followed by Hasegawa Fine Molds address in Japanese only.

​The other side panel continues with more color illustrations of uniform insignia and the address again and MADE IN JAPAN.

This kit holds two identical light grey trees of parts. Parts do have number tabs next to them.

The trees each contain the four figures as full bodies with seperate arms. The officer figure has his left leg, below the knee as a seperate part.

There are 3 large holsters and one small one on the tree. The larger ones have sink marks in them.

The samurai sword completes the parts. (19 parts per tree) 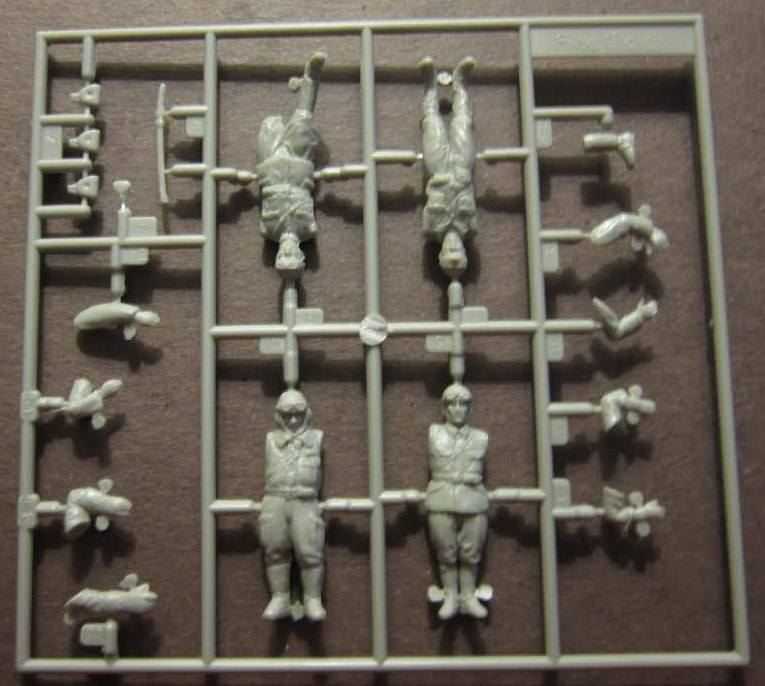 Detail on these guys is great. However, the poses are kid of ho hum.

Otherwise recommended.
​I purchased my kit at my local hobby shop back in the 90's.