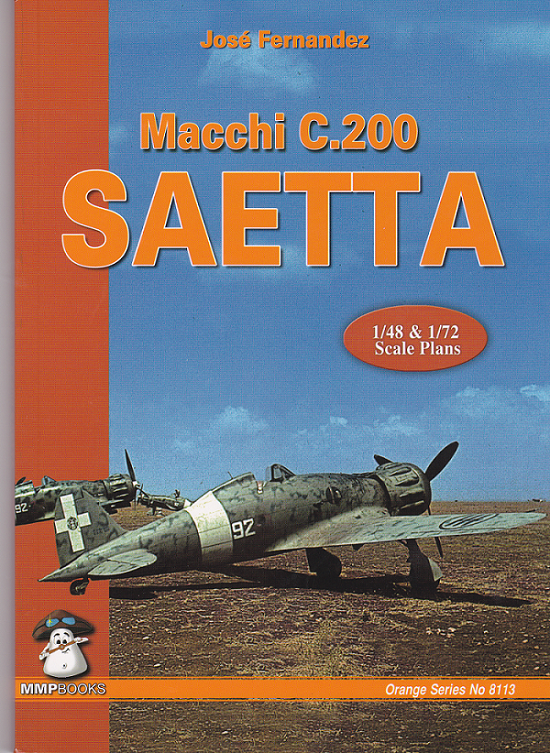 Mushroom Model Publications (MMP) is located in the U.K. All their books are printed in Sandomierz, Poland by their associate Stratus in the English language. Stratus also does their own books in both English and Polish.

This new book came directly from Stratus, packed in a padded envelope with a stiff sheet of cardboard to protect it.

The Macchi C.200 Saetta was a WWII Italian fighter aircraft built by Aeronautica Macchi and used throughout the Regia Aeronautica (Italian Royal Air Force). The C.200 was highly maneuverable an a popular aircraft with its pilots.

This book describes and illustrates the design and development of this fighter. The design, development and operations of these aircraft is covered in detail, illustrated with many unpublished rare color as well as black and white photgraphs. It contains full color detail and restoration photos of preserved aircraft, and details from the technical manuals. Additionally, there are also superb color illustrations of the camouflage and markings. There are also scale line drawing plans in 1/72nd and 1/48th scales.

The rare color wartime photos and the color ones that are walk-rounds taken in museums number 74.

There are 60 black and white wartime photos.

There are 50 color profile illustrations throughout the book. Four of these are done as 3-views. In addition to the ones in Facist markings there is one each in captured British, captured U.S. and one in Italian co-beligerent markings used after the 1943 armistist.

There are 2 data charts and 37 illustrations out of technical manuals.

There is a folded up loose sheet insterted into the book that has 1/48th scale line drawings on either side of it. These show 7 different series marks of the C.200 and one illustration is a 5-view.

This has got to be the definitive book on the C.200 and a great companion to Mushroom Model Publications (MMP) book on the Macchi C.202, which was the sucessor to the 200 and also another book by MMP.

Highly recommended and will be of interest to aviaton historians as well as scale modelers.

I want to thank Dr. Roger M. Wallsgrove, Editor in Chief of MMP and the folks at Stratus for this review sample.

Information on all MMP books can be found on line at www.mmpbooks.biz

The European distributor is ORCA

The North American distributor is CASEMATE

The Australian distributor is PLATYPUS