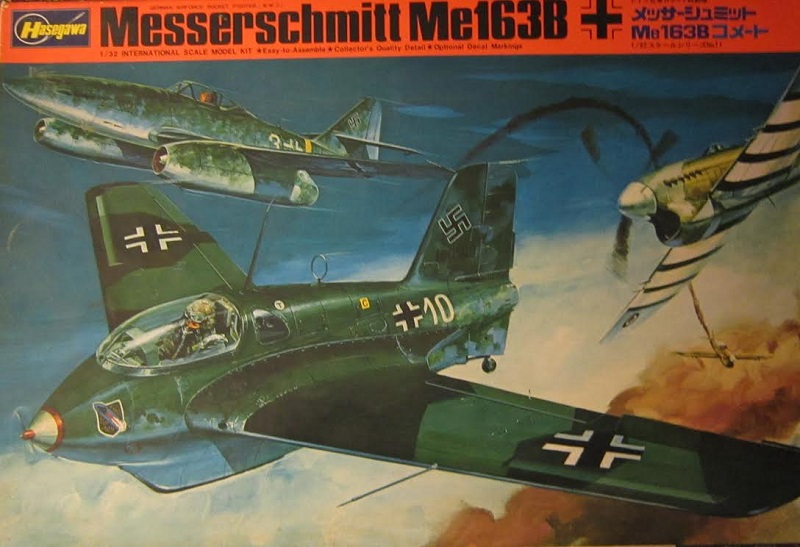 Hasegawa is an older prolific model company, based in Shizuoka City, Japan - the same place that Tamiya calls home.

The box art shows a Me-163B and a Me-262 being chased by two British Tempest fighters. One of which is going down in flames. The nearest Tempest has D-Day invasion black and white stripes under it's wings.

The 163 is in a splinter pattern of black-green and dark-green above a light-blue undercarraige. The light-blue extends up onto the rudder and has dark green mottle over it. The logo of the 2/Jg. 400 (The Farting Flea) is on the sides of the nose. A white 10 is behind the fuselage cross. The nose is white edged in red. Two yellow fuel mark squares are visible.

The Me-262 is in a dark-green mottle over light-blue. It has a skeletal cross with a white 3 before it on the fuselage and a yellow fuselage band behind it.

One side panel says the kit was manufactured by Hasegawa in Shizuoka City, Japan. This is followed by a small color illustration of the Walter 509A rocket motor and a small repeat of the box art.

The other side panel has a color profile of a Me-163 in the same color pattern as the box art, with the same 2/Jg-400 logo on the nose, but with a fuselage white number 13. It, and 2 other squadron logos are shown in color:

The Komet Training Staffel, which is a shield with a Me-163 soaring upwards out a white cloud. This is followed by a paragraph in Japanese.

The box is very blousy. It has a strange addition to one end of the box of a cardboard tube that says CALENDAR on it and it has a window in it with a sliding scale in the window. Other than the word CALENDAR in English, everything else is in Japanese.

The kit contains 2 medium-grey parts trees, a clear tree, the instructions and a full-color slick coated sheet with the painting and marking instructions on both sides. Trees are in a sealed cello bag.

Page 1 of the instruction begins with 2 black and white photos of the model made up in the markings for 1/Jg-400. One photo shows the model together and the second photo shows it with it's tail removed to view the rocket engine. This is followed by what I assume is the history of the Me-163B in Japanse only. There are 2 black and white photos shown at the bottom of the page of Me-163's in museums. There are also 5 black and white walk-around type photos showing areas of the anatomy of a Me-163 in a museum.

Page 2 through 5 give a grand total of 13 assembly steps.

Page 3 includes line drawings of the cockpit interior that looks like it came out of a tech manual and one of the landing skid, also probably from a tech manual.

Page 4 has 2 black and white walk-around photos of a Me-163 in a museum somewhere.

Page 5 continues with 5 more black and white walk-around photos from a museum.

Page 6 has the parts trees illustrations.

Although there are only 2 medium-grey parts trees in the kit. One tree is actually the letter A and C parts.

Below the parts trees is a black and white photo of a Me-163B sitting on a grassy field next to a woods with British markings on it. Probably captured.

The slick coated sheet has a top and bottom view and 4 side profiles in full color:

2. The Training Squadron, in overall light-blue with dark green mottle over light-blue undercarraige. It has a white 54 on the rudder and the squadron logo on the nose.

3. 1/Jg-400 with overall light-tan upper surfaces with dark-green mottle over a light-blue undercarraige. It has a white number 4 on the rudder and the squadron logo on the nose.

4. An all-over bright-red Me-163B with fuselage code of black PK+QL.
to edit. 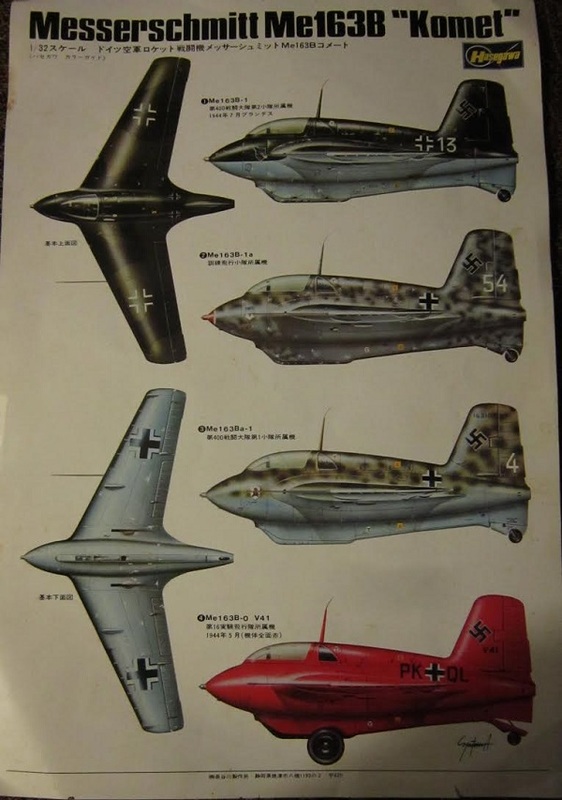 ​The other side of this sheet has a black and white line drawings showing where the markings are positioned, followed by a lot of Japanese text and a black and white photo of the rocket engine on display at some museum. 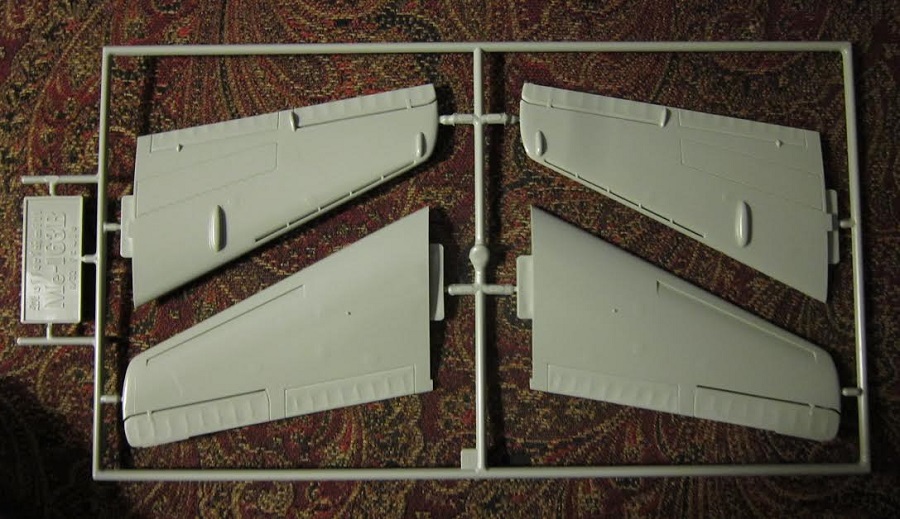 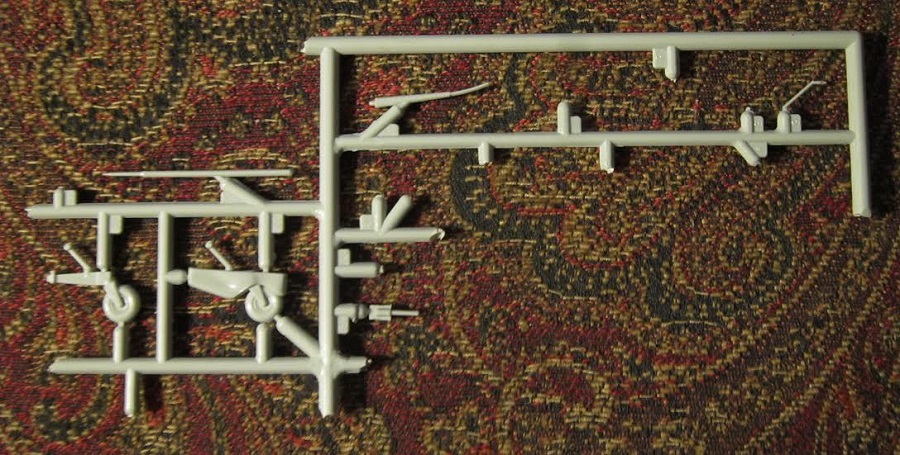 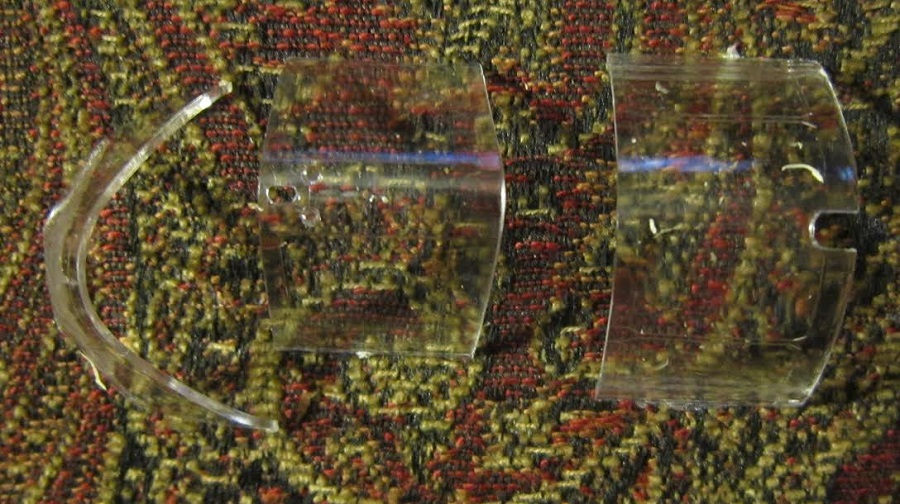 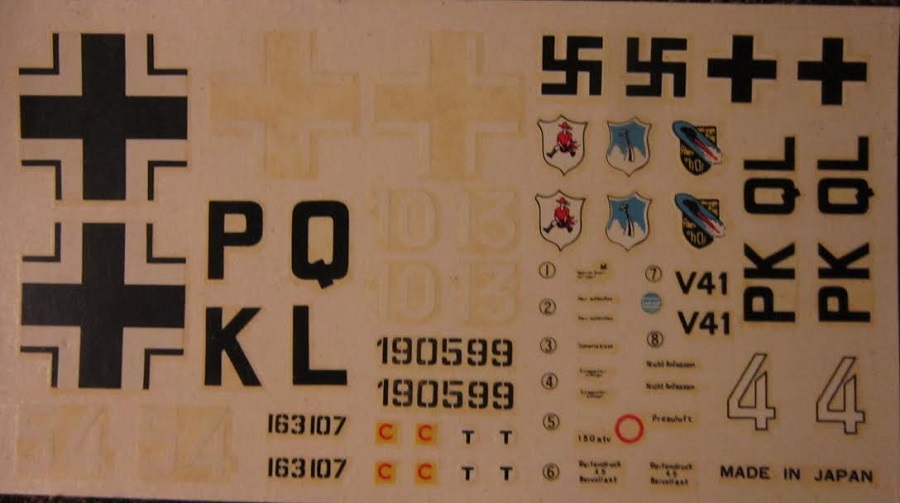 ​I have started assembly of this model. I did the cockpit interior, forward and rear fuselage sections and the rocket. I painted the interior, the rocket and the landing gear skid.

Sadly, I dropped the landing gear and lost all it's support arms. I will have to either display the plane with the skid retracted or try and scratchbuild replacement arms....sigh. 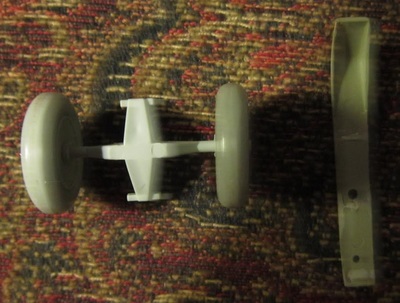 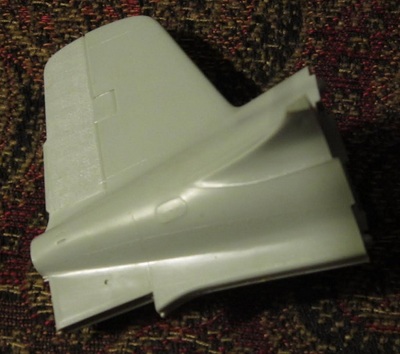 I bought the Squadron/Rubin Miniatures brand 54 mm 1/32nd scale white metal Rocket Pilot 1945, kit no. 32 to add to this kit. He is full bodied with seperate arms.

This kit has great details. However, the control surfaces are molded solid and would take surgery to re-position them. Highly recommended.
Kit was courtesy of my wallet over 40 years ago.