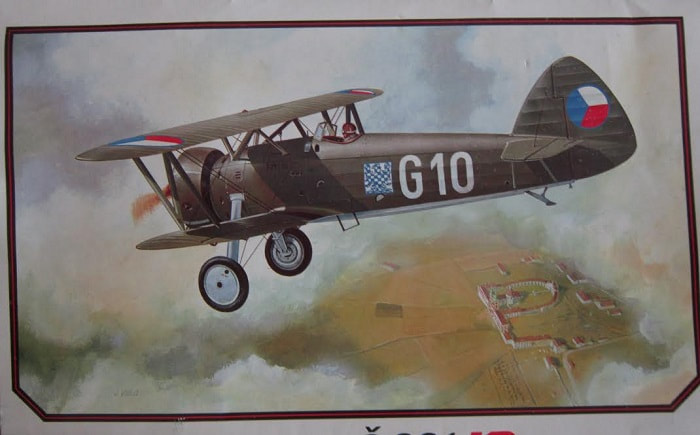 Kit no. 23
By Ray Mehlberger

The Letov Š-31 was a fighter aircraft produced in Czechoslovakia in the early 1930s in a number of variants. All of the aircraft had metal tubular framing and fabric covering with a metal engine cowling.

The first flight of the definitive and highly altered Š.231 version was on March 17, 1933. After testing at the Czechoslovak flight facility at Prague-Lethany, modifications were undertaken to improve the machine’s performance.

It entered production the following year and began equipping Czech fighter units in June 1936. The machines however did not remain in frontline fighter status with the Czechoslovak Air Force until the German occupation of Czechoslovakia in 1939.

The sole Š.331 and 22 out of 24 produced Š.231s were sold to representatives of the Spanish Republican government. Reports of their combat record in the Spanish Civil War are vague, but at least three machines survived the war and were used by victorious Nationalists. The operational performance and ultimate fate of the Š.331 is unrecorded.

KP was a model company based in the Czech Republic. I don't know if they exist anymore??

This kit came in a end-opening type box that is 4" too long and flimsy. My kit is badly crushed from the weight of other kits in my stash that were piled on top of it. The box was not shrink-wrapped, but held shut with tape.

I am no fan of end-opening type boxes, because invariably parts of the decal sheet find their way past one of the end flaps to become lost forever. Give me a tray and lid type box any day of the week.
The box art shows a Letov S.231 flying above clouds. It is olive drab above a light blue under side. It has Czech roundels above the upper wings and below the lower wings and on the rudder sides. The fuselage code is a white G10 with a blue and white checkerboard logo before the code.

The bottom of the box has two color 4-views.

2. A Spanish Air Force scheme in olive drab over light-blue under side. It has red wing tips on the bottom of the lower wing and a red fuselage band. It carries a black fuselage code CL-009. The rudder has red, yellow and blue horizontal stripes across it (reading top to bottom). It has pale-grey walking strips inboard on the top of the lower wing. 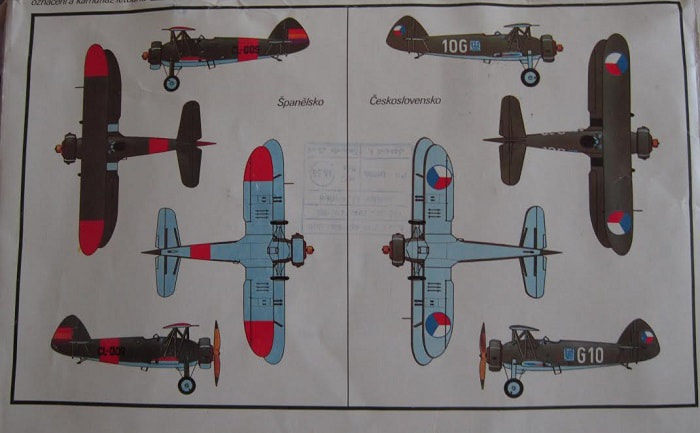 ​The part trees are not alphabetized and there are no part number tabs next to the parts on them.
​WHAT'S IN THE BOX:

The kit contains 2 chalk-white trees and a clear windscreen part, the decal sheet and instructions.

The clear part is the windshield (1 part)

I put all the kit's contents into a snap shut type clear plastic box that I liberated from work years ago. 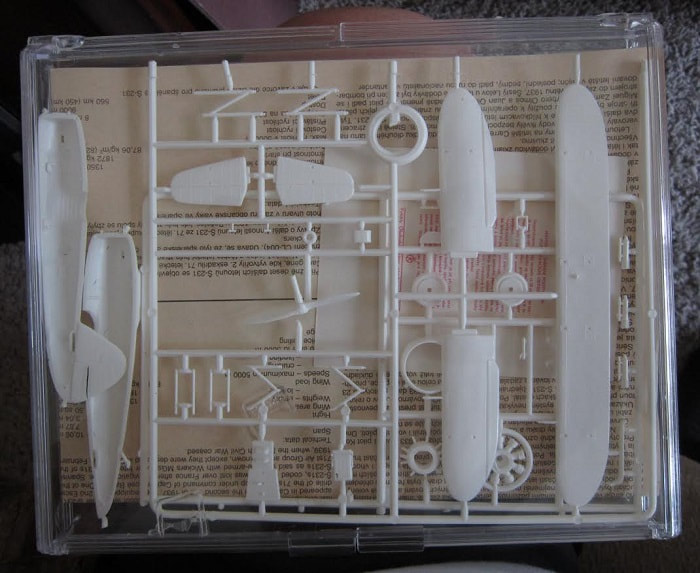 ​
The decal sheet and instructions complete the kits contents. 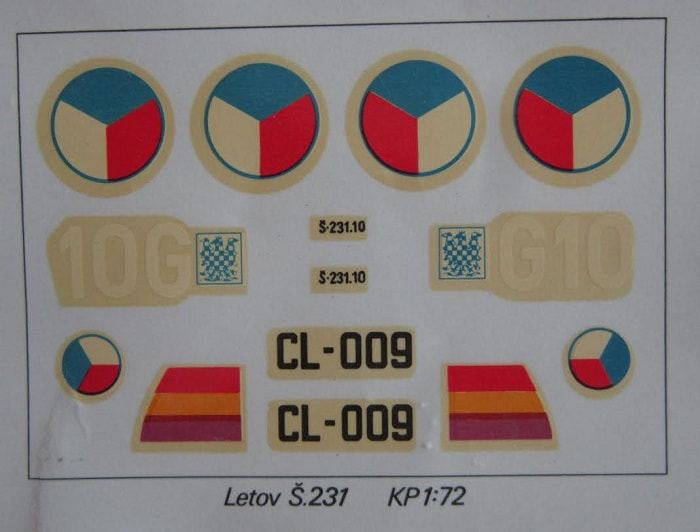 The instructions consist of a single sheet of brown newsprint type paper. It is 12" x 17" and folded twice to fit the box.

The face side has a grainy black and white illustration of the Letov S.231 in flight.

The other side of the sheet has the history of the acraft in English and German and a head-on line drawing of the aircraft.

This side also has a READ BEFORE YOU BEGIN instructions in Czech, English and German, over a list of 25 other aircraft kits that KP manufactured, the parts trees illustrations and 2 exploded drawings for assembly.

This kit is nicely detailed with raised panel lines. The wing flaps, rudder and elevator flaps are all molded solid.

Recommended.
​I got 2 of this kit years ago in trade with a modeler in Krakow, Poland.