The Japanese aviation industry was proud of high performance technology in several aircraft developments, such as the A6M Zero fighter. However, the defeat of WWII brought restrictions on development and production.

The restrictions were lifted in 1952. In a period of 7 years, the world's aircraft technology made a lot of progress in jet aircraft.

To Japan aviation industry that was a blank 7 years. It was the T-1 jet trainer of the JASDF that filled the blank and became the first step to achieve a great aircraft.

The prototype was completed in November 1957. The first flight wa successful on January 19, 1958. After the flight test program was completed successfully, in 1959 the T-1A was mounted with  the Orpheus engine type and formally went into production.

The first mass production type was delivered in September 1960. The T-1A, which is mainly deployed in the 13th Flying Training Wing, began to serve in the important role to raise new pilots.

The T-1 jet trainer was used as the first domestic jet aircraft since WWII.

Forty-six T-1A's (3 of them had their engine changed  and reassigned as the T-1B) and 20 T-1B's were built, and they were active in training for the pilots of the JASDF.

T-1's raised many pilots to protect the sky of Japan for nearly half a century with the T-1A aircraft that finished its role in 2001 and the T-1B aircraft in 2006.
THE KIT:

This kit comes in a tray and lid type box that is not shrink-wrapped.
The box art shows a T-1A flying above the clouds.

It is white, with a red scalloping down its fuselage sides and red wing, rudder and elevators leading edges.

it has a yellow panel under its nose and yellow wings, rudder and elevators tips.

There is a logo of a blue circle with a blue arrow-like symbol through it on the rudder.

The box art say the kit contains Cartograf decals that are printed in Italy.

One side panel begins with a 1-paragraph history of the T-1A, followed by features of the kit: 1/72nd scale plastic model kit, length 168mm (7"), width 145mm (6"), well detailed with accurate panel lines, realistic detail that is easy to assemble, external fuel tanks included as an option to assemble, silk screen printed decals by Cartograf, in Japanese and English.

This is followed by a color side view of another T-1A in the same color scheme. It has a blue diagonal flash on the rudder, a black serial number 05-5811 on the rudder and a black 811 on the side of its nose.

​The other side panel has 2 color side views of the model made up in the box art scheme, followed by the statement "This is a plastic unassembled scale model kit. Glue and paint are not included. Some parts are extremely sharp. Handle carefully. Do not use near fire while using paint or cement. Suitable for age 15 and above.

This kit contains 3 medium-grey trees, a clear tree and the decal sheet in 3 self-sealing clear cello bags, the instructions and a color and marking guide. Both printed on slick-coated paper.

The instructions consist of a single-sheet folded in the center to create 4 pages in 7" x 10" page format, folded again to fit the box.

Page 1 begins with a small black and white repeat of the box art and Platz's address, telephone and FAX numbers, over the history of the T-1A and general instructions in Japanese and English.

Page 2 through 4 give a grand total of 9 assembly steps.

The color guide is the same format and size as the instructions.

Page 1 has a color and marking instructions as a 4-view of the box art scheme (already described above). 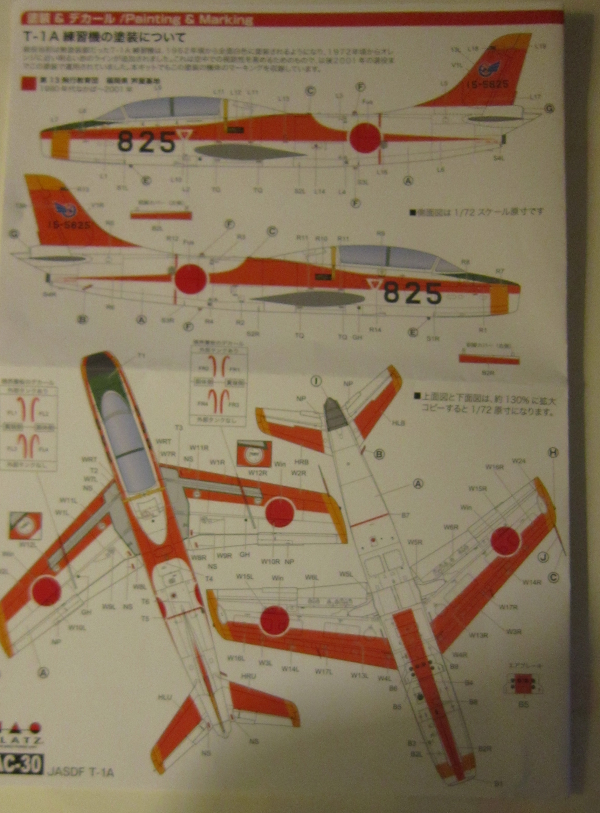 ​Page 2 has 3 color illustrations of the noses and rudders of 3 other T-1A's, with black fuselage numbers on their noses as 805, 811 and 812 and bomb and fuel tank colors and markings, over suggested paint color listing of Mr. Color brand paints and the parts trees illustrations and an illustration of the decal sheet. 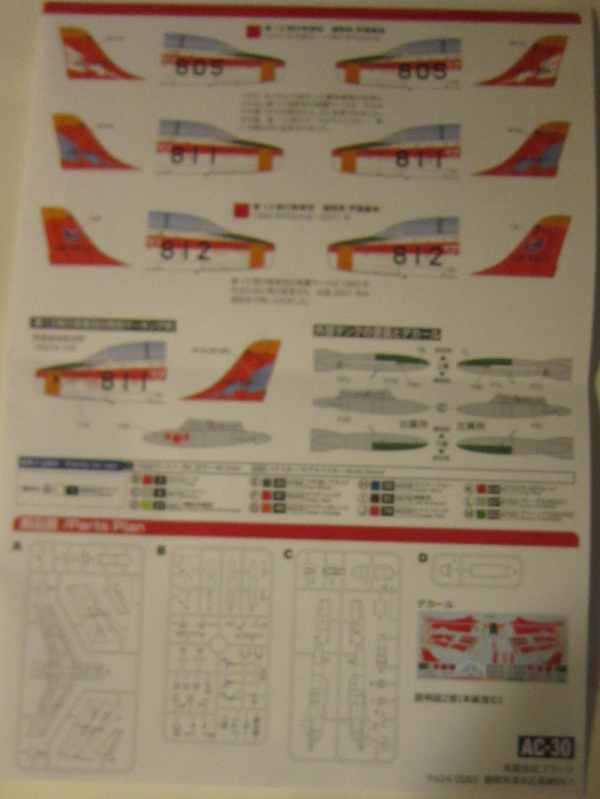 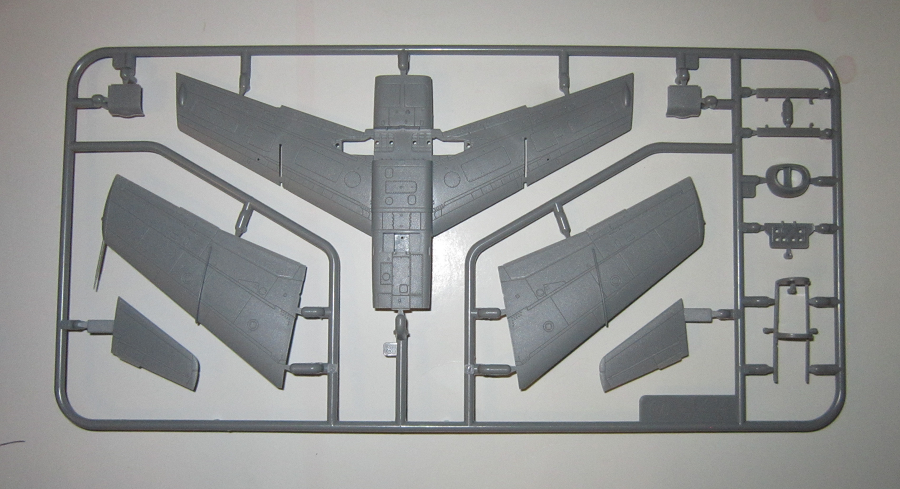 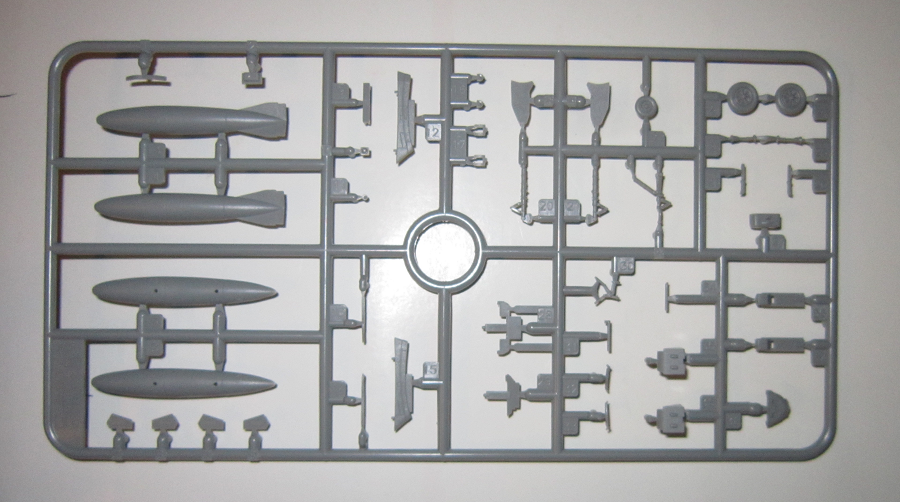 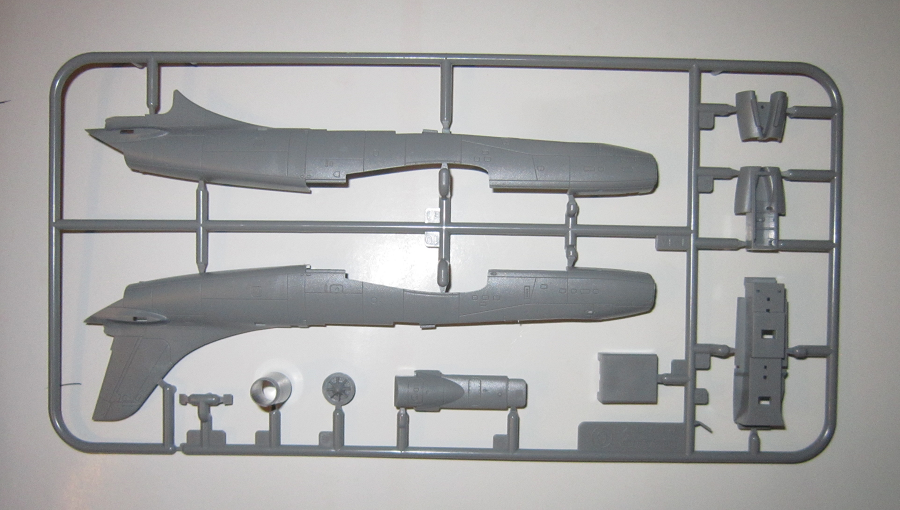 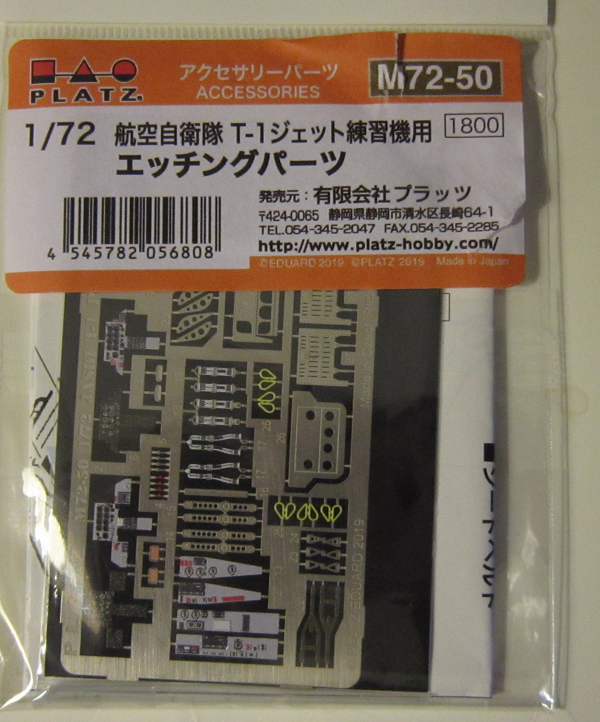 ​There is no pilot figure included. Detail is very nice.

I want to thank Platz for this review sample. All their products can be seen on their website at: