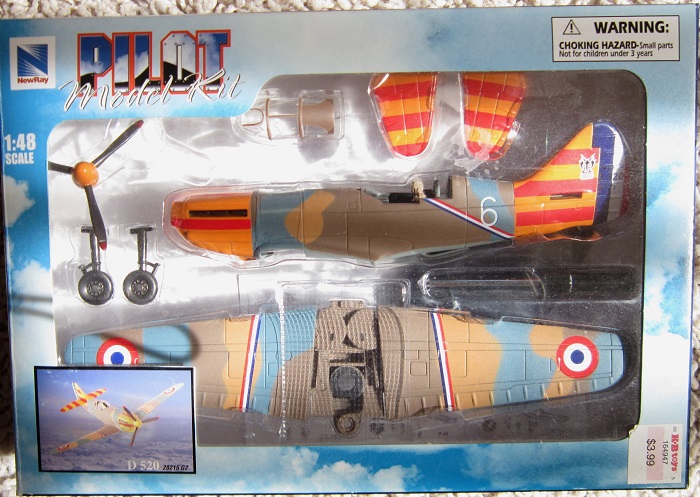 New Ray Toys Company was based in Hong Kong. I’m not sure if they even exist anymore.

The Dewoitine D.520 was a French fighter aircraft that entered service in early 1940, shortly after the beginning of World War II. Unlike the Morane-Saulnier M.S.406, which was at that time the most numerous fighter in the French Air Force, the Dewoitine D.520 came close to being a match for the latest German types, such as the Messerschmitt Bf 109. It was slower than the Bf 109E but superior in manoeuvrability.[1] Because of a delayed production cycle, only a small number were available for combat against the Luftwaffe.

The D.520 was designed in response to a 1936 requirement from the French Air Force for a fast, modern fighter with a good climbing speed and an armament centred on a 20 mm cannon. At the time the most powerful V 12 liquid cooled engine available in France was the Hispano-Suiza 12Y, which was less powerful, but lighter than contemporary engines such as the Rolls-Royce Merlin and Daimler-Benz DB 601. Other fighters were designed to meet the specifications but none of them entered service, or entered service in small numbers, too late to play a significant role during the Battle of France.

This kit comes in an end-opening type box with locking tabs on the end flaps. The top of the box has a clear window that shows all the contents inside. A small color illustration of the D-520 is pasted to the corner and a choking hazard warning for kids under 3 years old is said, due to small parts in the kit that they might swallow.

The bottom of the box has 16 color box arts of other aircraft that New Ray Toys markets. Assembly instructions are shown for a P-51 mustang and not the D-520. Rather strange! New Ray’s street address in Hong Kong and their web address are provided.

This kit contains a vacuformed clear tray that has recesses in it to hold the various kit parts. The kit is to be held together by metal screws. However, dry-fitting it together showed that cement will also have to be used along with the screws. The kit is factory painted in French Vichy French Air Force markings. The scheme is for an aircraft with the GC III/6 (Groupe de Chasse Fighter group). I think it was flown by Sergent-Chef (Chief Sergeant) Pierre Le Gloan, who also flew a Morane-Saulnier MS-406 that had the same aircraft number and black mask squadron logo on it. He was later sent to Tunisia and had 18 confirmed victories to his credit. This kit is in a camouflage of light gray, brown and green with red and yellow barber stripes on the nose and tail. It has a white number 6 on the fuselage side followed by a red, white and blue diagonal fuselage stripe. The stripe is repeated on the wings. The tail has a red, white and blue rudder.

This factory paint job is far superior to anything I could do with my airbrush and is faultless.

The instructions is a small sheet printed with one exploded drawing for assembly. 6 different aircrafts are shown, each as an individual exploded drawing: the D-520, a Spitfire, a Bf-109, a P-40, a P-51 and a Corsair.

This kit has a pilot figure who is the only thing needing painting. It is pretty much a snap-together kit that is held together with metal screws provided. However, dry fitting the parts showed that it will also need to be cemented together along with the screws.

Highly recommended if you can find any for sale on the net. I purchased my kit years ago at a discount mall that had a toy store that carried this brand.

I sometimes wonder if some unscrouplous modeler hasn’t at some time entered one of these factory painted models in a contest saying that it was all his work? 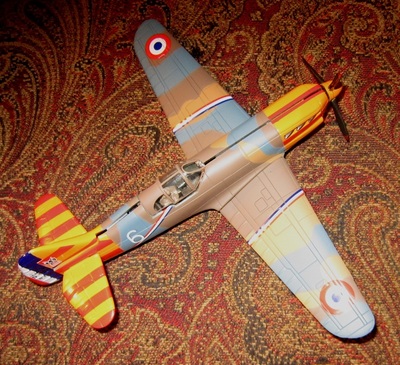 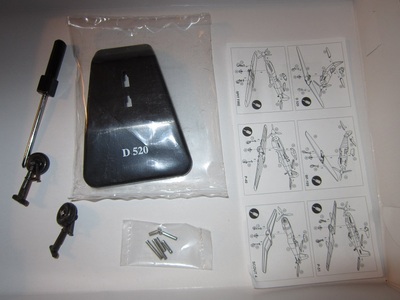