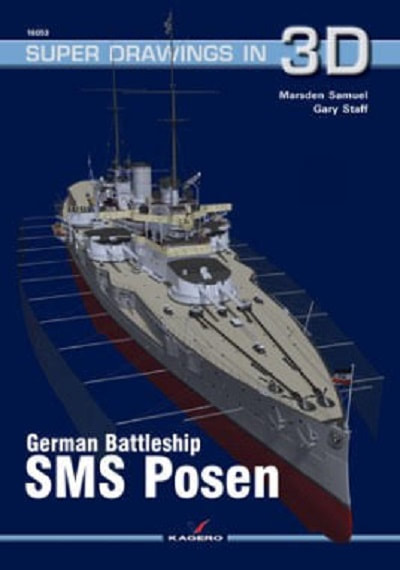 SMS Posen was one of four battleships in the Nassau class, the first dreadnoughts built for the German Imperial Navy (Kaiserliche Marine). The ship was laid down at the Germaniawerft shipyard in Kiel on 11 June 1907, launched on 13 December 1908, and commissioned into the High Seas Fleet on 31 May 1910. She was equipped with a main battery of twelve 28 cm (11 in) guns in six twin turrets in an unusual hexagonal arrangement.

The ship served with her three sister ships for the majority of World War I. She saw extensive service in the North Sea, where she took part in several fleet sorties. These culminated in the Battle of Jutland on 31 May – 1 June 1916, where Posen was heavily engaged in night-fighting against British light forces. In the confusion, the ship accidentally rammed the light cruiser SMS Elbing, which suffered serious damage and was scuttled later in the night.

The ship also conducted several deployments to the Baltic Sea against the Russian Navy. In the first of these, Posen supported a German naval assault in the Battle of the Gulf of Riga. The ship was sent back to the Baltic in 1918 to support the White Finns in the Finnish Civil War. At the end of the war, Posen remained in Germany while the majority of the fleet was interned in Scapa Flow. In 1919, following the scuttling of the German fleet in Scapa Flow, she was ceded to the British as a replacement for the ships that had been sunk. She was then sent to ship-breakers in the Netherlands and scrapped in 1922.

The cover shows the SMS Posen in a head on above view with its anti-torpedo nets deployed against a dark blue background.

There are 4 illustrations of the FF33e Friedrichshafen biplane it carried on its catapult.

The book includes a pair of cardboard goggles, with one blue lens and one red one to use to view the 3D color illustrations.

One side has a cut-away side view and a top view. The other side has 27 illustrations of cross sections of the ship.

These illustrations are by Marsden Samuel.

The last page of the book shows the cover arts of 53 other books in Kagero's 3D line. These are all ships.

This is a neat book and highly recommended to ship modelers and marine history enthusiasts.

I want to thank the folks at Casemate Publishing, the North American distributor of Kagero books, who sent me this sample, and the folks at Kagero

A full listing of Kagero books can be seen at:
www.casematepublishing.com