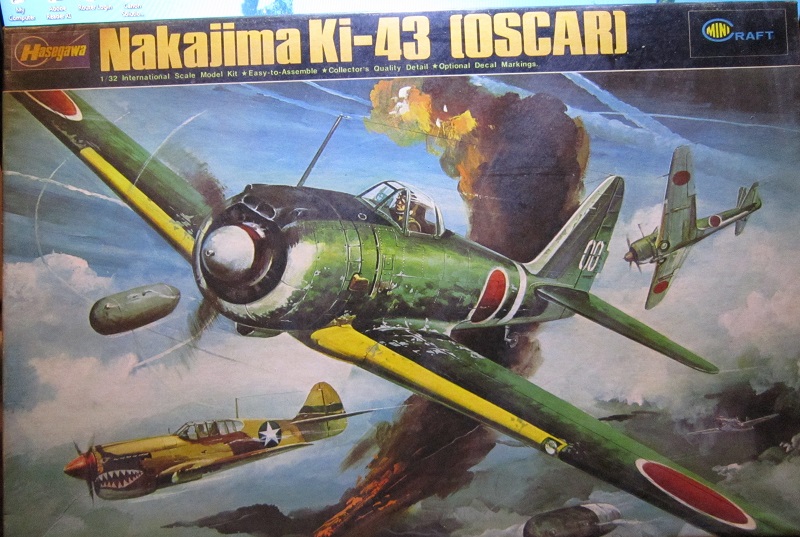 Although the famous Zero-sen, or Japanese Zero, received the most of the publicity as Japan’s foremost fighter during WWII, a great deal of credit is due also to the Nakajima Ki-43 Hayabusa. Preceding the Zero-sen by a mere three months, the first Hayabusa began its test program early in January 1939.

The Hayabusa was the result of a well-planned program to produce an interceptor and escort fighter to replace the Japanese Army’s fleet of ageing Ki. 27 fighters. The requirements for the new fighter included a top speed of 311 mph, an average rate of climb of 3,280 feet per minute to 16,500 feet and a range of 500 miles. Specified armament was two 7.7 mm machine guns. Difficulties arose when it became apparent that each provision of the specification could be met only by dropping of the others. Careful planning of the airframe led to a light-weight, low drag design coupled to one of the most powerful engines available in Japan. Part of the light-weight was due to the fact that self-sealing fuel tanks and protective armor were not included in the design. A shortcoming 9 of nearly all contemporary Japanese aircraft. Considerable drag reduction was achieved by the first fully retractable landing gear used on a Japanese Army fighter.

The first three prototypes were delivered to the Army for service tests. The Army pilots who tested the new planes were used to the nimble ability of the Ki. 27. Their reaction to the heavier Hayabusa was decidedly unfavorable! The preproduction models were delivered by the end of 1940, each with progressive modifications to improve performance. The most important of these improvements was the “combat flap”. When lowered during action these flaps increased control sensitivity  and lift as well as tightening the turning radius. The latter was a decided advantage in a dogfight. Following the introduction of the combat flaps, Army pilots became enthusiastic about the Hayabusa. Full-scale production of the Ki-43 begtan in April 1941, and when Japan went to war that year forty Hayabusa’s were in operational units.

The Hayabusa was first used as an escort fighter on bombing missions to Hong Kong and Burma. The first Allied unit to encounter the Hayabusa was the American Volunteer Group (Flying Tigers) in China.; As production increased, Hayabusa’s began replacing the obsolete Ki.27 and it soon became the Japanese Army’s new standard fighter. The Japanese pilots were delighted with their new warplane and began attacking Allied fighters with a great deal of confidence in the Hayabusa. Allied pilots, who later evaluated the Hayabusa, were strong in their praise for its sensitivity and maneuverability and they all agreed it was definitely a pilot’s airplane. Its turn and stall characteristics were superior to any comparable Allied fighter. The Hayabusa had a remarkable rate of acceleration from 150 mph to 250 mph, and the wiser of her opponents learned to avoid any combat at such speeds. On the other hand, the lack of firepower, armor protection and generally slower cruising speed, when compared to Allied fighters, counteracted those finer characteristics.

The first Ki-43-IIA was completed in February of 1942. It featured improvements intended to make it more competitive with the newer American fighters beginning to appear. Pilot protection in the form of 13 mm armor plate was added and the vulnerable fuel tanks were now made self-sealing. The first production models of the Hayabusa’s were armed with two 12.7 mm cowl-mounted guns. Strangely enough, this same inadequate armament remained on the later versions of the fighter and were considered the weakest feature of the plane.

The name Hayabusa translates to Peregrene Falcon. Allied pilots identified the Hayabusa by the code name OSCAR. By either name the Ki-43 earned a notable reputation for itself in WWII. More of these fighters were used by the Japanese Army than any other type, the total amounting to 5,751 and it served on every front in which the Japanese Army was engaged.

Hasegawa is a prolific model company based in Japan, Minicraft imports their kits and is located in California.

This kit came in a large sturdy shrink wrapped tray and lid type box. The box art shows 2 Ki-43’s in a dog fight with some P-40’s.  The Oscar in the foreground is in a scheme of dark grey above a bare-metal undercarriage. It has a white propeller spinner, yellow leading edges on the wings, a  black anti-glare panel in front of the windscreen,  a white fuselage band and white leading edge to the tail. Behind the white leading edge is a dark blue diagonal stripe. The rudder sides have a white stenciled OO on them. It is dropping its drop tanks. The Oscar behind it is in the same color scheme with a red leading edge on the rudder. It’s marking is not on the decal sheet.

The box art says the kit is in 1/32nd scale, is easy to assemble, has collector’s quality detail and optional decal markings.

One side panel has a color illustration of the Oscar’s engine. It says that the kit was manufactured by Hasegawa Seisakusho Co., Ltd. in Shizuoka, Japan.

The other side panel has a color side view and two tail color illustrations for 3 Oscars. These are all included on the decal sheet. However, the instructions do not mention what units these were with. These illustrations are followed by “Distributed by Minicraft Models Inc., and Minicraft’s street address in Torrance, CA. Below this is PACKAGED IN USA.

The instructions consist of a single sheet that is folded vertically and horizontally in half to form 8 pages in 8 ½” x 11” page format.

Page 1 begins with black and white photo of the model made up in a scheme of overall bare metal with dark green blotches. It has a white fuselage stripe and a yellow L-shaped symbol outlined in black on the rudder. The propeller spinner is yellow. This scheme is included on the decal sheet. Below this is the history of the Ki-43 in English and Distributed by Minicraft Models Inc,. and their street address in Torrance, CA.

Page 2 through 5 give a grand total of 13 assembly steps.

In step 3 you opt for the drop tanks or bombs.

In step 4 you opt for type IIa or IIb exhaust.

Colors of items are called out in each step. The engine assembly consists of no less than 23 parts and is very detailed.

There is a pilot figure included and the cockpit is very nicely detailed, only needing some seat belts.

The canopy is in two parts and can be posed open to show the cockpit interior.

Page 6 has the parts trees illustrations with a list of the names of what the parts are. NEAT!

Page 7 begins with a wartime black and white photo of a Ki-43 on a grassy field in front of some hangars. It is overall bare metal with a black anti-glare panel in front of the windscreen and an unidentifiable character on the rudder. Below it is a side profile scheme of a Ki-43 in dark grey above bare metal undercarriage. It has a white propeller spinner and a white leading edge on the rudder. The propeller blades have yellow tips and the leading edges of the wings are yellow also. There is a diagonal dark blue stripe behind the white leading edge of the rudder and a white stenciled OO on the rudder. This is the box art illustration, but missing the white fuselage band here.  The unit this aircraft was assigned to is not mentioned.

Next is a Ki-54 that was with the Royal Thai Air Force. It is in a base of brown with dark green stripe pattern. Colors are called out in FS numbers. It has national markings of black squares with a white elephant on them. And a white fuselage band. The illustration shows the side, top and bottom of this aircraft.

Page 8 has a 3-view of a Ki-43 that is dark green above bare metal undercarriage. It has 3 narrow yellow fuselage bands followed by a white one The leading edge of the tail is white. The propeller spinner is dark brown. All the colors are called out in FS numbers. Below it is the Ki-43 described above that headed page 1. 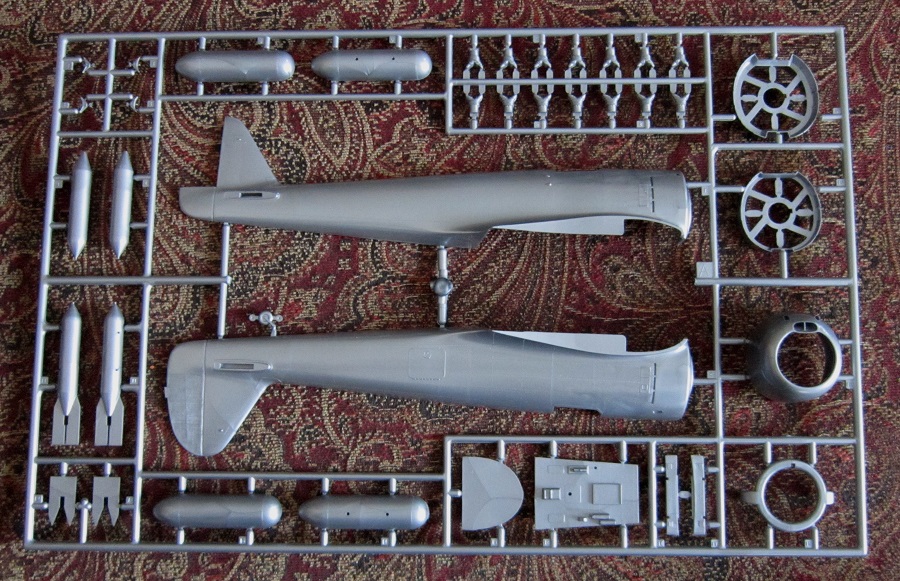 Metallic colored letter B tree holds: the wings, wheels and engine central parts (11 parts) The lower wing is full span. The wing flaps are molded solid and would take surgery to re-position. 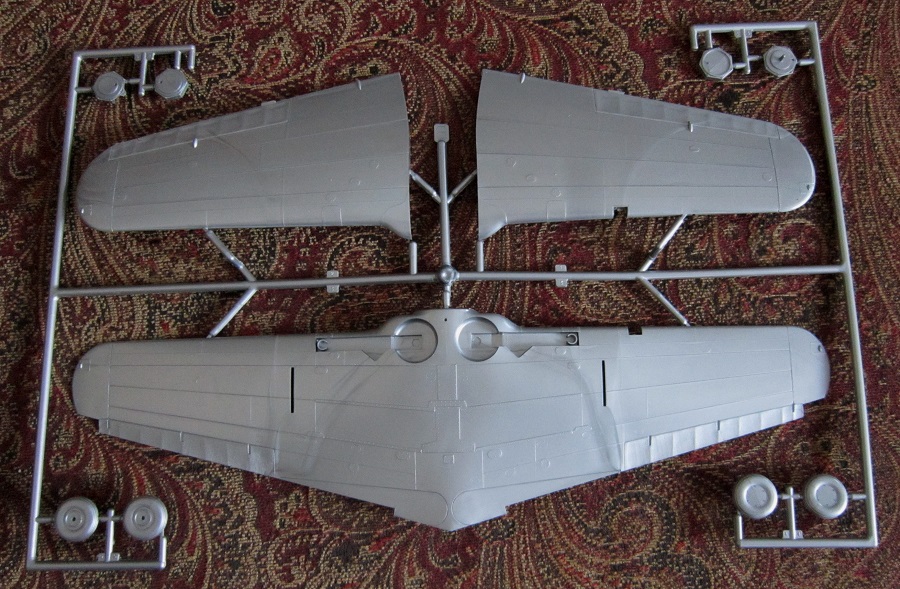 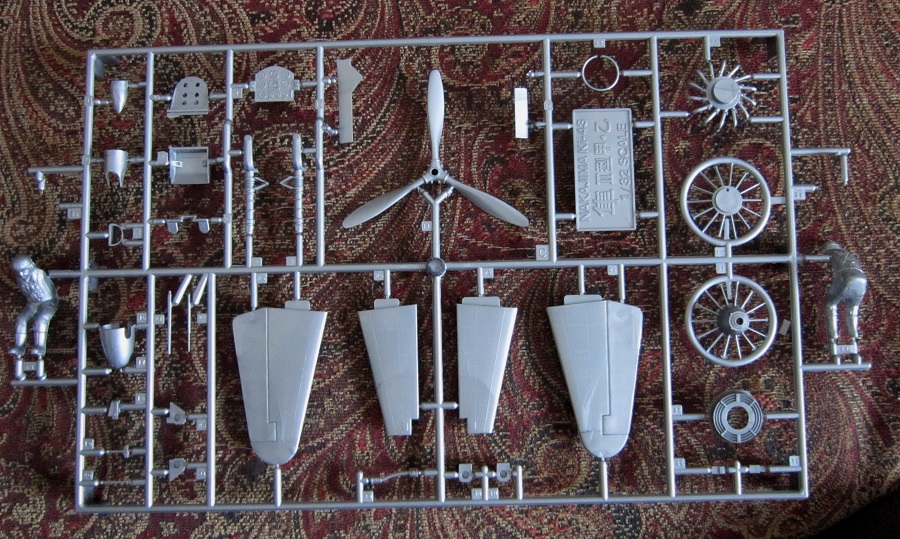 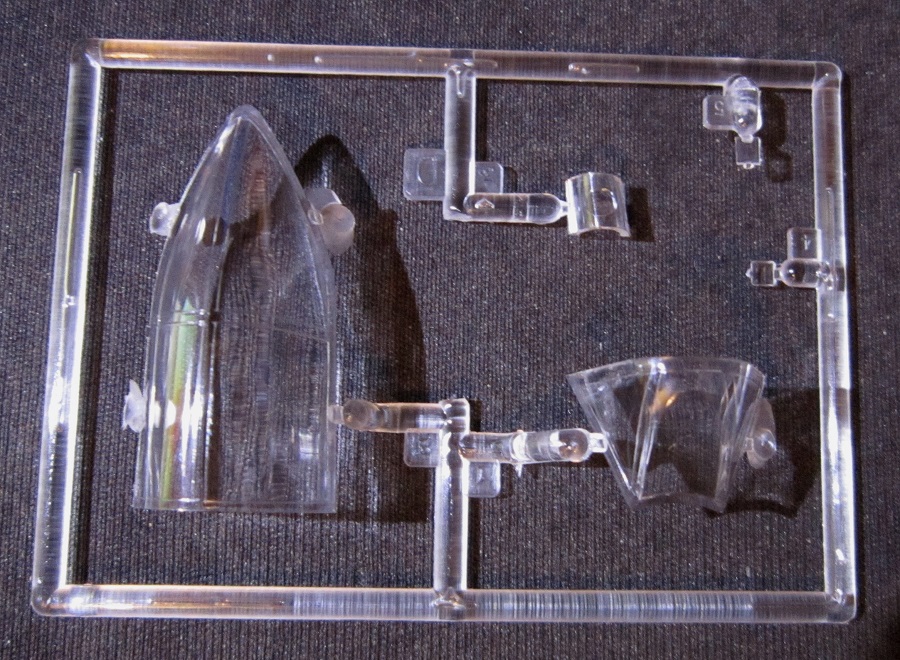 The decal sheet completes the kits contents. It has a few marking on it that are not called out anywhere in the instructions. One mark is a black chevron. Second is some small yellow squares and third is a black stripe with Japanese characters at each end of it. Don’t know where any of these go ?? 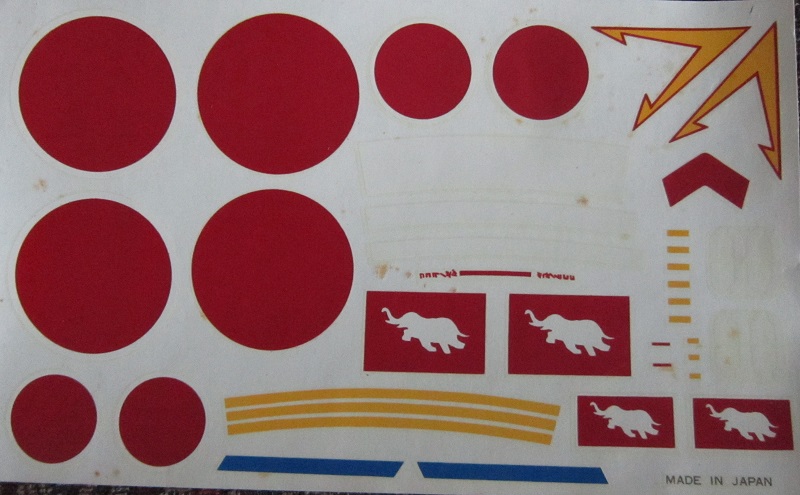 This is a neat kit and if a modeler wanted it overall bare metal finish he would only have to paint the anti-glare panel in front of the windscreen black and the propeller and it’s spinner and the tires.

I highly recommend this model to modelers of average building skills.