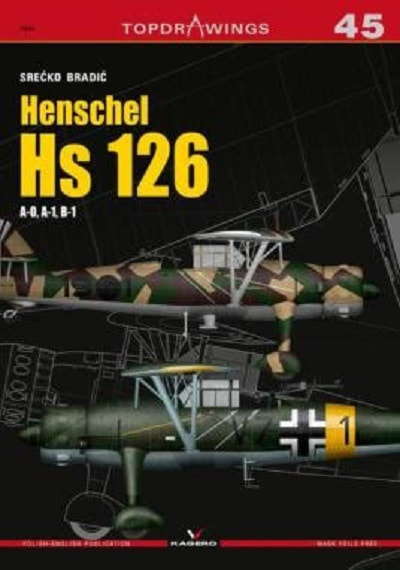 Henschel Hs 126 was a two-seater all-metal hinged monoplane with fixed landing gear. The first prototype - Hs 126 V-1 (D-UBYN) - had its flight-test in August 1936. It was powered by 12-cylinder liquid-cooled JUMO 210 C engine. By the end of year 1937 ten preproduction Hs 126 A-0 were delivered. Aircrafts were produced at Henschel-Werke plant and also at AGO Flugzeugwerke.

For the optional close support missions it was capable to carry bombs on two side racks (2×10 kg or 2×50 kg). It also had radio equipment and after gaining combat experience, some machines were equipped with side armor plates of 8 mm steel.

The first combat employment of several Hs 126's took place in Spain, where they were used as tactical reconnaissance within Ausfklarungsgruppe 35, and where they received the code name "Super Pavo”. Loses in Spanish civil war were minor. Some Henschels were also sold to Greece, Bulgaria and Estonia.

At the beginning of world war II (invasion on Poland) the Hs 126's were the backbone of reconnaissance units of the Luftwaffe. From 29 staffelns this machine was deployed in 23 of them (267 Hs 126's were in combat units, of which 234 were combat-ready).

However, Polish campaign showed that Hs 126 is vulnerable airplane. German lost about 41 of them to a AA fire and Polish fighter actions, and another 40 were seriously damaged.
Hs 126 participated in missions over all WW2 fronts: from Africa, Soviet Union, West Europe to the Balkans. On the 1st of June 1941 Hs 126's were still used by operational combat units as well as flying schools. However, raising loses resulted in withdrawing the type from combat units, but it was still presented in big number. For example, in March 1942 from 35 Aufklärer Staffels on East Front 16 operated Hs 126's.

Just in first day of Operation "Barbarosa” Germany lost 13 Hs 126's and by the December 1941 they lost even 381 of them. Germans tried to accompany Hs 126's with fighter escort during missions but this did not help much. For this reason from autumn 1941 the obsolete Henschels were replacing by more modern Fw 189.

It is worth noting that Hs 126 played their role on rescuing the Benito Mussolini on 12th of September 1943. It made a reconnaissance mission to spot landing positions for gliders.
By the March 1944 only 174 Hs 126's still remained in the Luftwaffe, some of which were in service with the following combat squadrons on the Eastern Front: 13./NSGr-11 with a base in Estonia, 2./NSGr-12 with a base in Estonia/Lithuania and 2./NSGr-7 with a base in the Balkans.
At that time title aircraft were used as night light bombers. Behind the front line the Hs 126 were used as daytime light bombers and scouts to fight the partisans, as well as communication planes in which role they served until the end of the war.

Today not much parts of the Hs 126 is preserved and most of them was lost over Soviet Union.
Another excellent resource for the aircraft modeller, recommended.

It comes in a re-sealable clear cello envelope.

The one at the top is in a splinter pattern of ochre, dark-green and dark-brown  over a light-blue undercarraige. It carries Spanish Civil War fuselage code in black of 19 black circle 1. This illustration is shown again inside the book and further shows a white rudder with a black X covering it.

It is a A-1 version in Spanish Nationalists hands,

The second Hs-126 below it is overall dark green above a light blue undercarraige, with a yellow fuselage band and black fuselage code V7 + 1C.

The first one is overall dark-green above a light-blue undercarraige. It has a yellow spinner and cowling front that the yellow extends from down the fuselage as a pin stripe before a yellow fuselage code of SE-AOG

It is a B-1 version (W.Nr. 3156) former Luftwaffe  code 6A + NL. The plane arrived in Sweden on 8th of October 1944, when it made a forced landing at Herrvik, Gotland Island with refugees from Latvia. AB Nordisk Aerojanst bought it and registered it on 11th of March 1945. After that, it received permission to fly to Rome, Gotland to Norrkoping (Swedish mainland).

Later it was repainted and equipped with target tug equipment and used between Kusagen (Stockholm) and Bravalla (Nordkoping). The plane was scrapped on 13th of January 1946 (the engine in a Tp 24 flying boat, which was the German Dornier Do-24.

There are kits of this aircraft around by about a dozen different model companies.

This is one neat book that will be of great interest to modelers and aircraft historians alike.

I want to thank Casemate Publishing, the N.American distributor of Kagero books for this review sample. All Kagero titles can be seen on Casemate's web site at:
www.casematepublishing.com