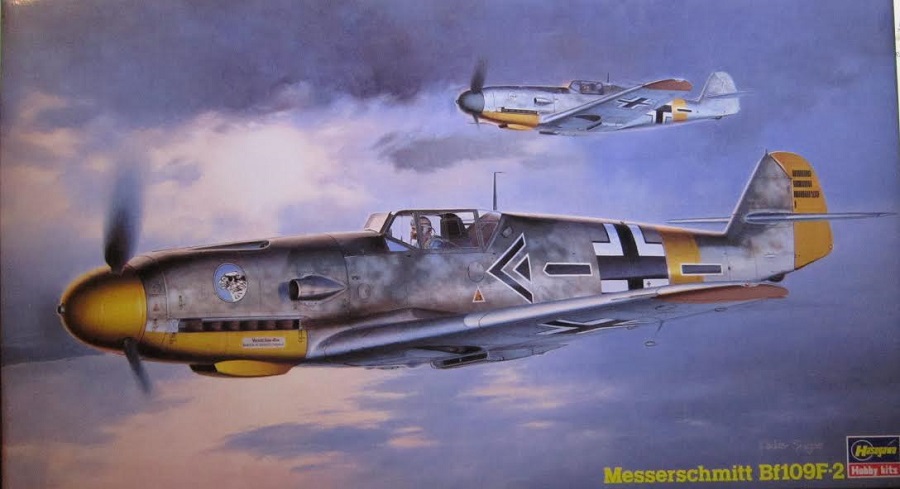 The Bf-109F series of Messerschmitt were the dynamically refined and fully modified type of the Bf-109E. Unlike their predecessors which looked rugged, featured extremely refined beautiful style and a motor cannon that had not been able to be installed in the planes up to model Bf-109E . It was installed and put into practice and because the weight of the cannon, combined with the armaments on the upper face of the nose was put near the axis of the plane, they were developed to be well-balanced fighters. They came to be called the strongest German fighters in the years 1941 and 1942.

Hasegawa is a prolific model company based in Shizuoka, Japan. They manufacture all manner of model subjects in the popular scales.

The box art shows 2 Bf-109F’s flying along. The one in the foreground is in a camouflage of a mottle pattern of two shades of grey over light blue undercarriage. It has a yellow propeller spinner and a yellow panel under the nose and underneath the wing tips. The rudder is also yellow. It has 130 victory marks on the side of the rudder.

There is a logo on the side of the nose of a blue circle with a hawk head on it. This is an aircraft belonging to Oberstlieutnant Werner Molders, Autumn 1941, Eastern Front, with JG-51. This scheme is provided on the decal sheet.

The other Bf109F behind it is camouflaged the same with similar markings. It has a black propeller spinner and no yellow rudder.

Both aircraft have been SANITIZED by leaving the swastikas off them, so the kit can be sold in Germany where the mark is a no-no to display in public. Swastikas are on the decal sheet however.

One side panel of the box says that the kit contains parts for one model. Paint and cement are not included. With English instructions, in multiple languages including English.

The other side panel has a color photo of the model made up in the box art scheme. The kit makes up to be 185 mm long and 207 mm wide. There are 67 parts in the kit. The copyright date of the kit is 1991 and it was made in Japan.

The kit contains 5 pale gray parts trees, one clear tree and the decal sheet in a sealed cello bag. The instructions and a full color painting guide and one in black and white complete the kits contents.

The box has a letter “L” void around the parts that is 2” wide. The box could have been smaller.

The instructions consist of a single sheet that accordion-folds out into 8 pages in 5 ½” x 8 ½” page format.

The painting guide is a single sheet that it is printed in full color on one side on slick coated stock and is 7 “ x 10” page format.

Page 1 begins with a black and white photo of the model made up in the box art scheme, followed by a one paragraph history of the aircraft in 7 languages, including English.

Page 2 begins with PLEASE KEEP TO THE FOLLOWING RULES in the 7 languages and a listing of paint colors suggested to use to complete the model. No less than 25 colors are there with numbers for Gunze Sangyo brand.


Page 6 and  7 each give a 4-view illustration for two of the aircraft that Molders flew. The first one is his aircraft in Autumn 1941 on the Eastern Front. Already described above.

The second one is his aircraft in July 1941 on the Eastern Front. It has a black spinner now and more kill marks on the tail. Everything else is the same as before.

Page 8 begins with decal application instructions in the 7 languages, followed by the parts trees illustrations, a mail in coupon for service for the kit in Japanese only. The kit is not suitable for children under 3. Hasegawa’s telephone number and their street address in Shizuoka Japan is provided. Instruction were printed in Japan in 1991.

No kit numbers are given, just “J” numbers. Whatever they mean???

Hasegawa’s street address appears again, along with 1991 and printed in Japan.

The black and white painting and marking guide is on regular uncoated stock and printed on both sides. It is the same 7” x 10” page format as the colored guide.

One side has two 4-views on it.

1.     Hans Von Hahn’s aircraft with I/JG-3, Berditschew, Russia, July 1941. It is in a camouflage of two shades of gray mottle above a light blue undercarriage. The darker gray is applied as small circles. It has a lot of exhaust dark stain from the exhaust pipes, flat black spinner and black-green propeller blades. It has a number of kills on the rudder a yellow fuselage band and the fuselage markings is 2 black chevrons followed by a large German cross. There is a logo of a green storm-worm on the sides of the nose.

2.     This is a  aircraft flown by Obltn. Hans Assi Hahn. (wonder if he was related to the other Hahn??  It is with III/JG-2, Caen France, November 1941.  It is in a mottle of two shades of gray the darker gray is less spots and they are not oval. The chevrons on the fuselage side are white outlined in black then the fuselage cross followed by a vertical bar in white outlined in black.  The nose of the aircraft is all yellow and the spinner is white. A logo of a rooster’s head is on the sides of the nose.

The other side of the sheet has three more 4-views. Two of them are for schemes and the third is for placement of stencil markings.

3.     An aircraft flown by Obltn Erich Rudorffer, with Kap 6/JG-2, December 1941, France. It is in a camouglage mottle of two shades of gray and very similar to the 2ndscheme of Hahn’s aircraft. It too has heavy exhaust stains, a yellow rudder, black green spinner and propeller blades and many kill marks on the rudder. The fuselage markings are a yellow 9 outlined in black, then the German cross followed by a yellow horizontal bar outlined in black.

4.     An aircraft flown by Lt. Jurgen Harden, with III/JG-53, June 1942, Russia. It is in the 2 shades of gray mottle with a black green spinner and propeller blades and a yellow fuselage band. It has a logo of a white diamond with a black ace of spades on it outlined in black on the sides of the nose. The fuselage marks are a black chevron followed by a black circle with a small bar coming out of the top and bottom of it and a black vertical bar behind the cross and over the yellow fuselage band.

As said, the bottom of the page has the 4-view showing where all the stencil marks go.

Light gray letter A parts tree holds: one half of the fuselage, one side of the elevator, one engine side door, wing flaps etc. (10 parts) 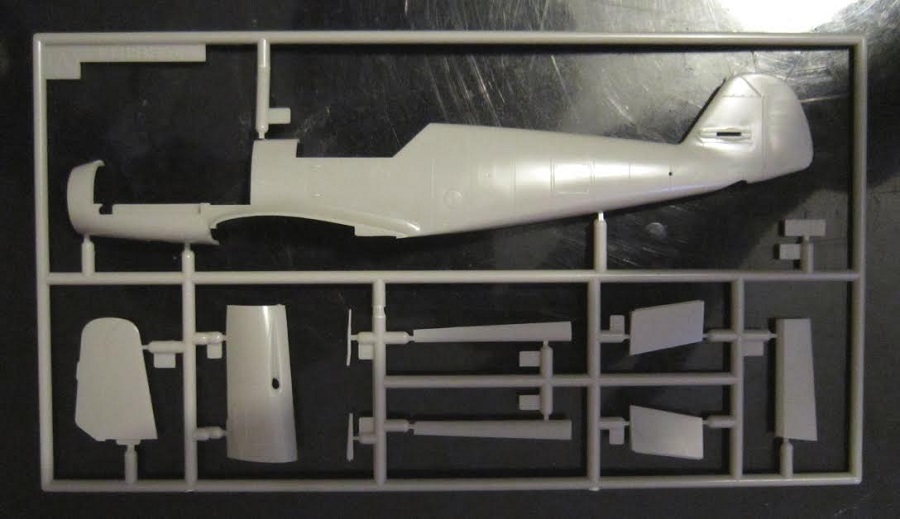 Light gray letter B parts tree holds: the other fuselage half, the other elevator, the other engine side door, more wing flaps and the main wheels and their doors (12 parts) 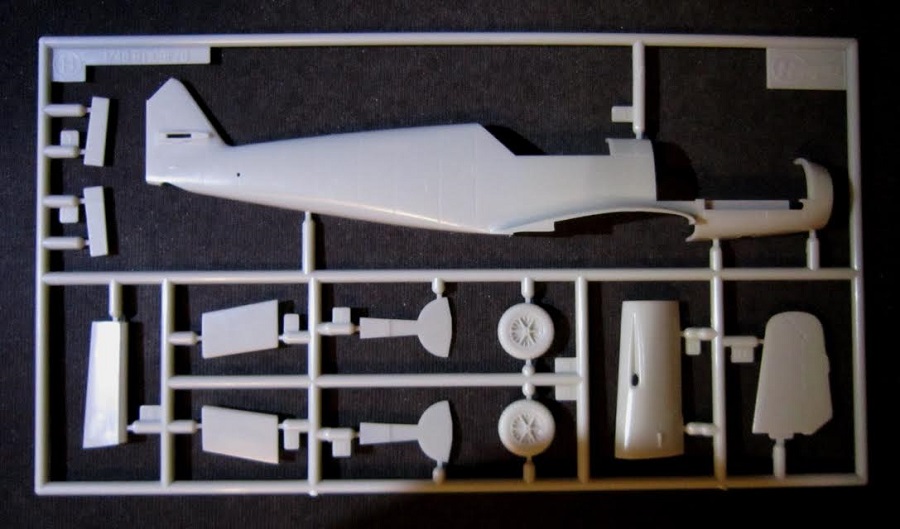 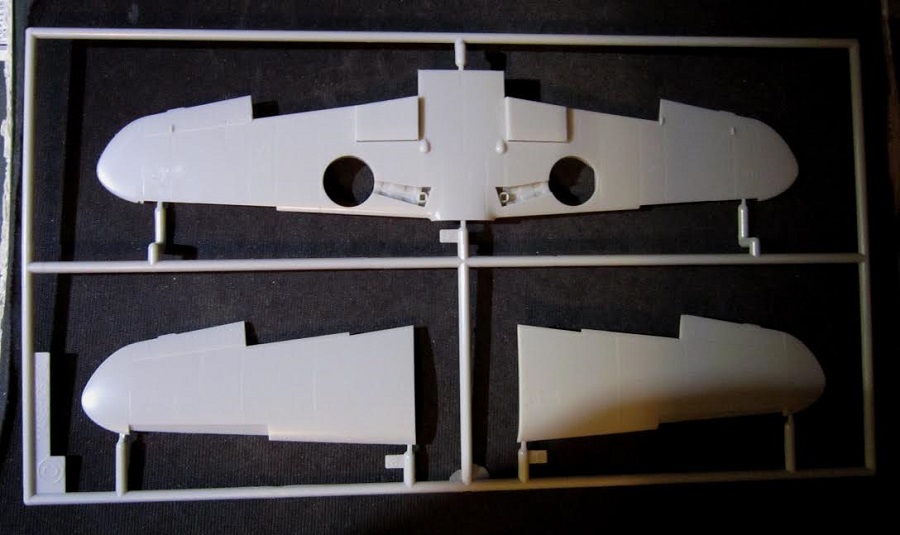 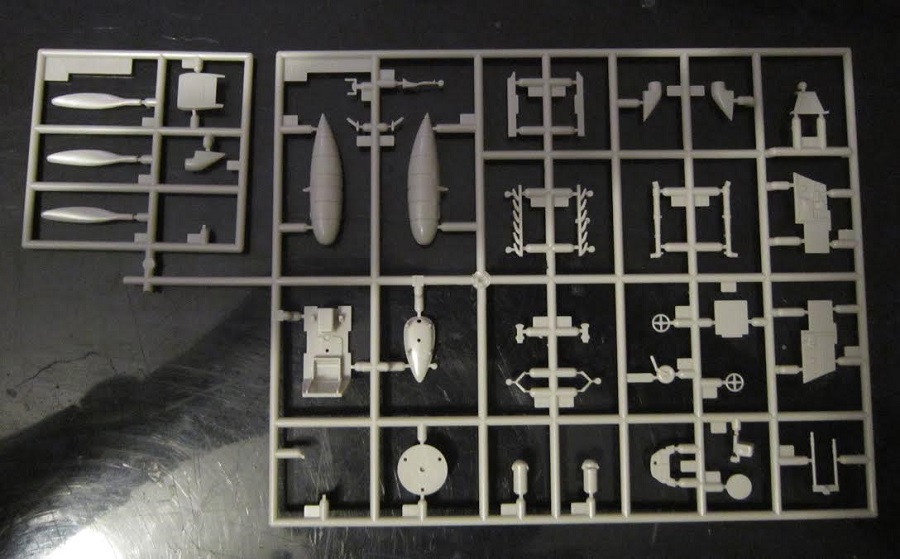 The clear parts tree is next. It holds the cockpit transparancy’s, the armored wind screen panel and the gun revi sight. (5 parts) 3 parts had broken off this tree in my kit, due to friction against the light gray trees. 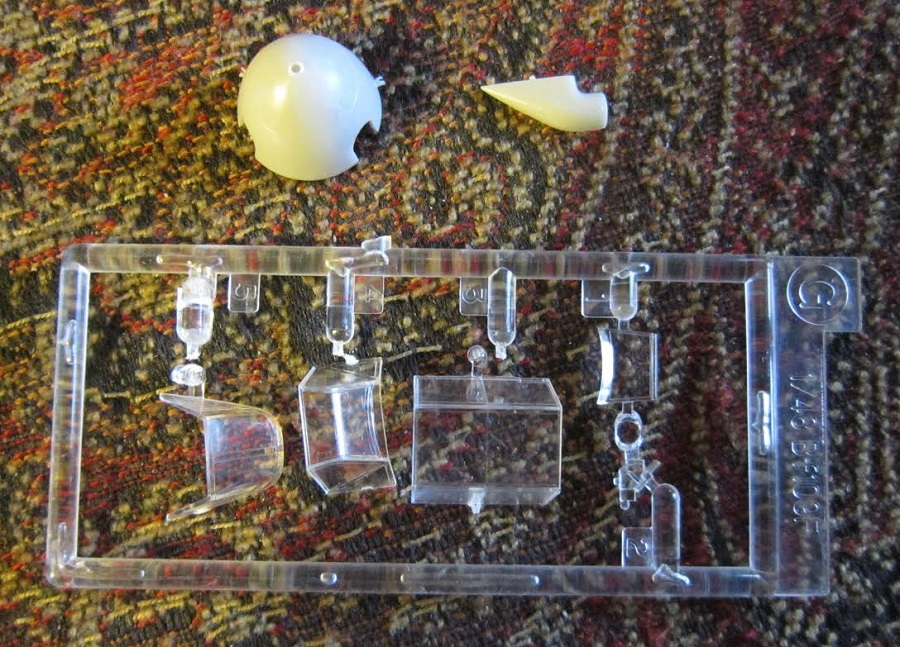 Panel lines are all nicely lightly engraved and the cockpit interior only lacks seat belts.

The 4 piece canopy can be posed open to show the great detail in the cockpit.

There is no pilot figure.

I like the separate wing flaps and wing leading edge panels.

However, the rudder and elevator flaps are molded solid and will take surgery to re-position.

The decal sheet surely has every stencil mark that ever appeared on this aircraft. I shudder at thinking about putting them all on the model and not messing some up. 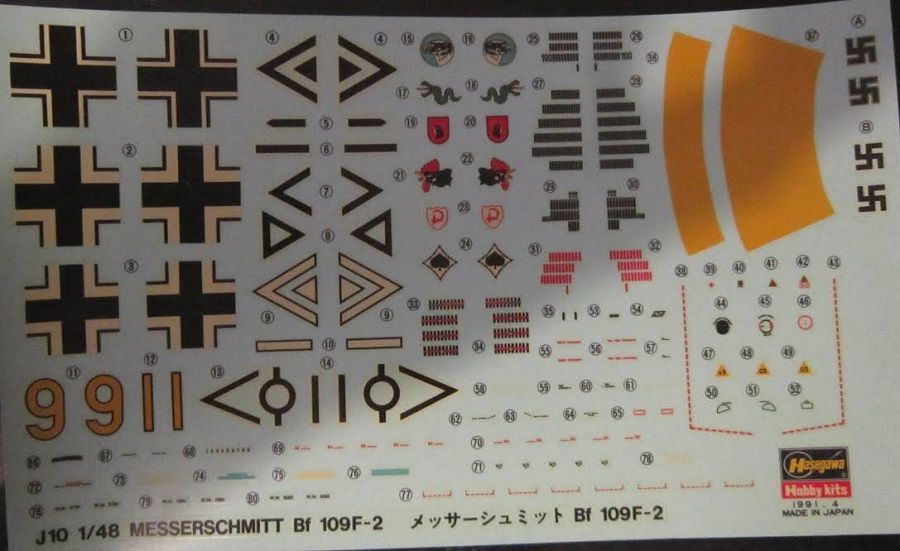 Kit was courtesy of my wallet back in the early 90’s.