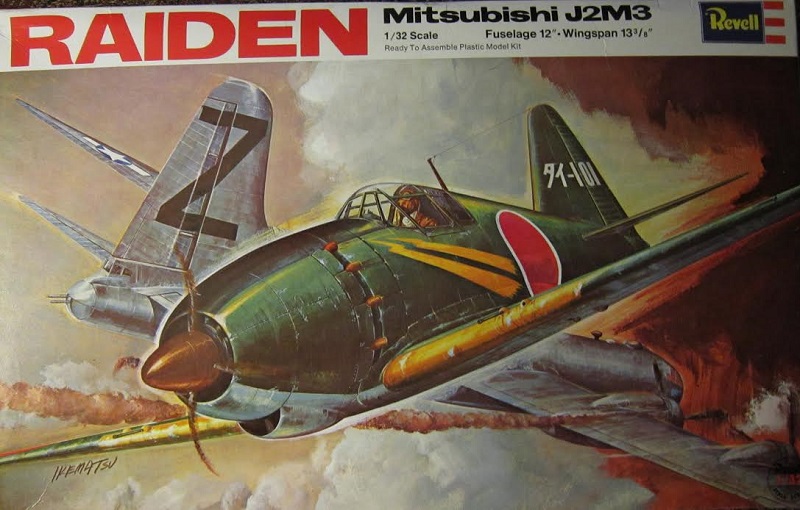 The Mitsubishi J2M3 Raiden (Thunderbolt) was built as a replacement for the famous Zero fighter and was designed by the same engineer, Horikoshi, whose earlier fighter had already become a legend.

Although plagued with problems at the start, once over-come, the Raiden was a vast improvement over the Zero-Sen, with its more powerful engine and heavier armament.

​Following its combat debut in the Marianas in September 1944, the Raiden was used almost exclusively in the defense of the Japanese homeland to the end of the war. The planned poduction of over 3,000 of the sleek looking aircraft was greatly hindered by Allied bombers to such a degree that only 500 were in fact completed.

Revell is an older prolific model company based in the U.S.A. with a manufacturing facility both here and in Germany. In recent years it became patnered with Monogram.
THE KIT:

The box art shows a Jack shooting down a B-29. The Jack is in dark green FS-34092 above light-grey FS-36492 undercarraige. It has yellow FS-33538 wing leading-edges and blue-black FS-35044 anti-glare panel in front of the windshield. There are 2 yellow lightning flashes under the cockpit and a white tail code of 2 Japanese characters -101. It has a red propeller spinner.

​The B-29 being shot down has a large black letter Z on the rudder.

One side panel shows a smaller color illustration of the Jack of the box art illutration, folloed by the history of the Jack and a photo of the detailed cockpit interior, the landing gear partially retracted and the detailed engine.

The copyright date shown is 1971  and Revell's address in Venice, CA is provided with MADE AND PRINTED IN THE U.S.A.

The other side panel has a blank to join the now defunct Revell Master Modelers Club for a buck back then.

On the ends of the box lid it says the skill level of the kit is modeling experience helpful.
​WHAT'S IN THE BOX:

This kit holds 5 green trees of parts, a clear tree, the decal sheet and the instructions. Parts are not in cello bags and are loose.

The instructions consist of a single sheet that accordion-folds out into 6 pages in 7 1/2" x 9 3/4" page format.

Page 1 of the instructions begins with a black and white repeat of the box art, followed by the history of the Jack and it's specifications.

Page 2 begins with BEFORE YOU BEGIN instructions, above the first 2 assembly steps.
Page 3 through 6 give a grand total of 9 assembly steps. Each assembly step has a lot of text to walk you through the assembly.

The trees are not alphabetized, but the parts are numbered. This means extra work to study the assemblies and then to find the correct parts on the trees. Bad move back then Revell !!

Only the box art marks are shown in step 9, but 3 other tail codes are on the decal sheet. 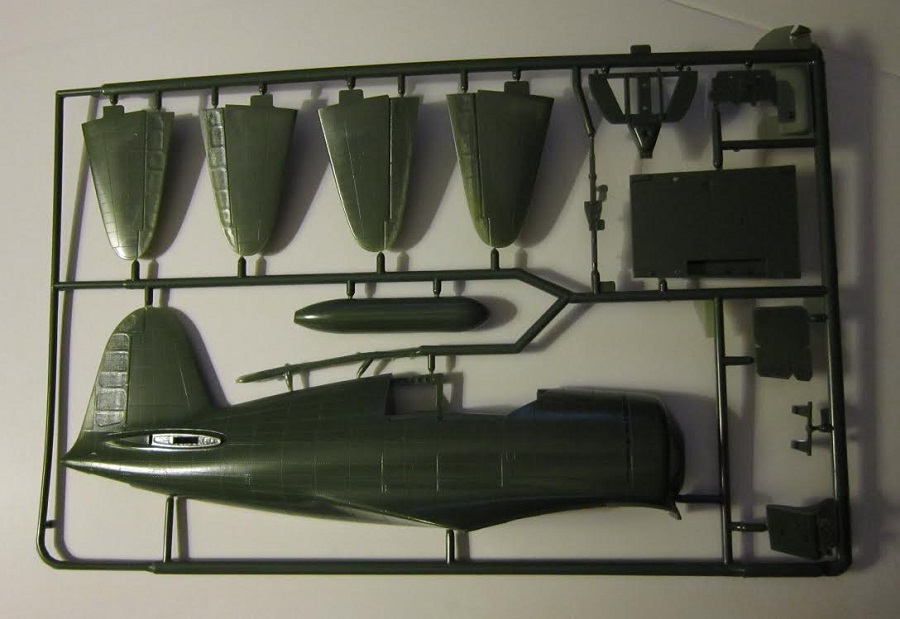 The 2nd green parts tree holds: the other half of the fuselage, cowling parts, the other drop tank half, landing gear legs etc. (40 parts) 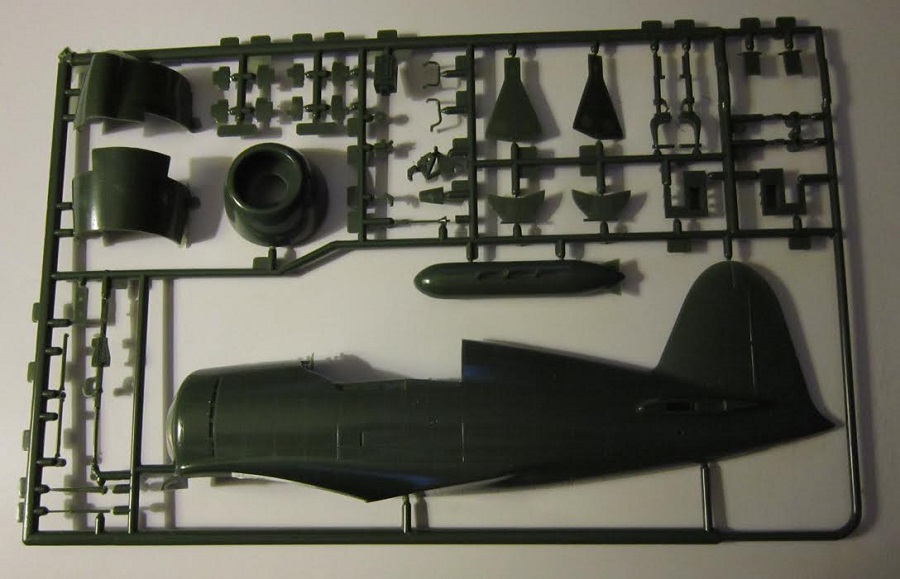 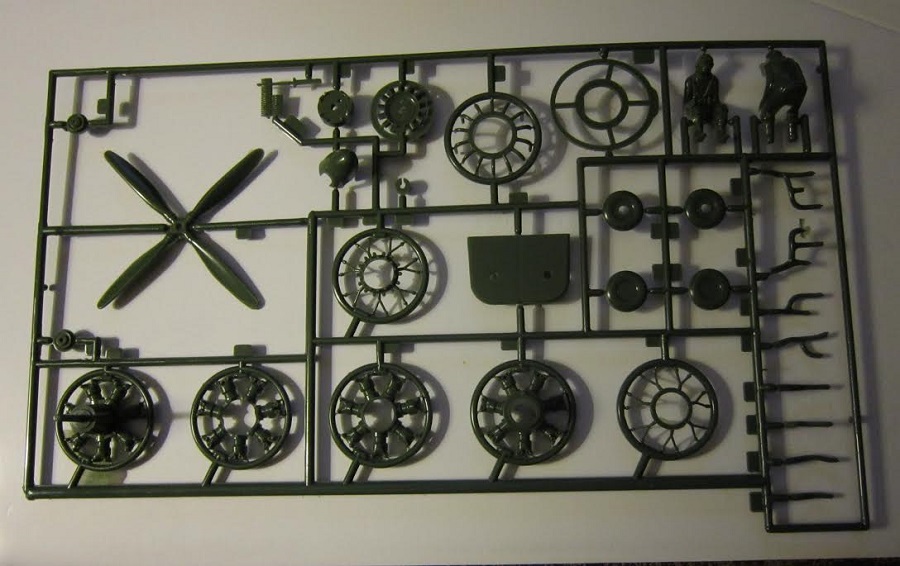 The final green part tree holds the bottom wing half. (it is full-span)

The clear parts tree holds the cockpit transparencies (3 parts) The cockpit can be posed open or closed.

No units for these codes is given. 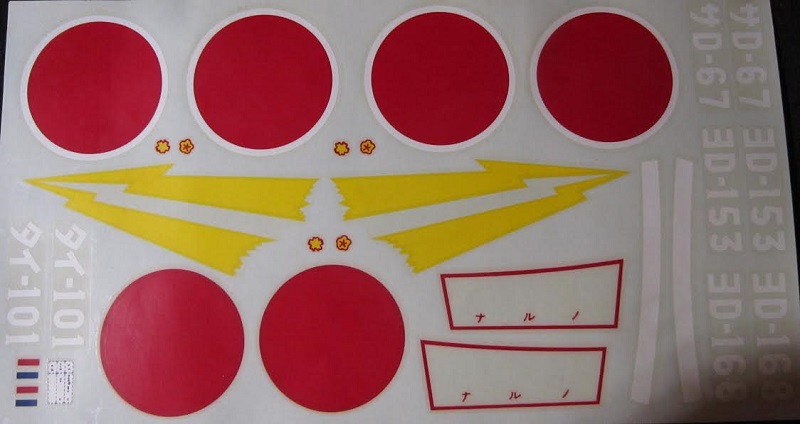 This is a very nicely detailed kit. The control surfaces are molded solid and would need surgery to reposition. Great value for the $2.55 I paid for it at the K-Mart 40 years ago.