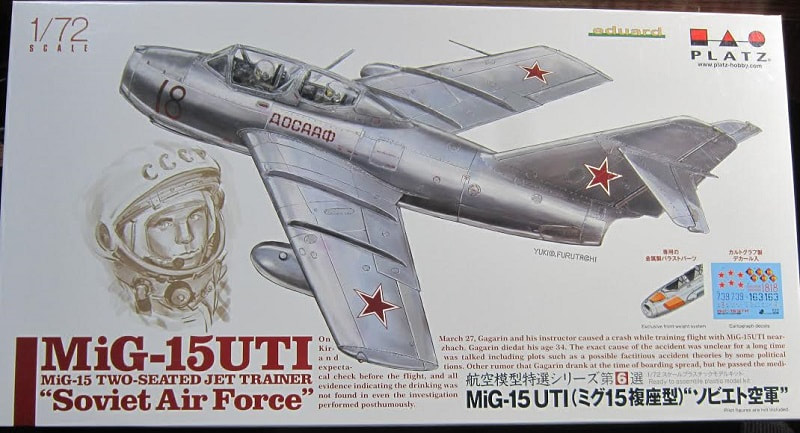 In combat over Korea, it outclassed straight-winged jet day fighters, which were largely relegated to ground-attack roles, and was quickly countered by the similar American swept-wing North American F-86 Sabre. The MiG-15 is often mentioned, along with the F-86 Sabre, as the best fighter aircraft of the Korean War.

When refined into the more advanced MiG-17, the basic design would again surprise the West when it proved effective against supersonic fighters such as the Republic F-105 Thunderchief and McDonnell Douglas F-4 Phantom II in the Vietnam War of the 1960s.

The MiG-15 is believed to have been one of the most produced jet aircraft; in excess of 12,000 were manufactured. Licensed foreign production may have raised the production total to over 18,000.[citation needed] The MiG-15 remains in service with the Korean People's Army Air Force as a UTI advanced trainer. It also served in that version with the E.German Air Force (subject of this kit).
​
THE KIT:

Platz is a model company based in Shizuoka City, Japan. The box art also says Eduard on it. I assume the kit was done in cooperation with them. Eduard is based in the Czech Republic.
On Platz's web site they say that in addition to manufacturing and selling their own products (plastic models, decals, etched parts etc). they also are an authorized import agent, selling products from world-famous plastic model makers (airplanes, tanks, figures etc.).

This is the second boxing of the Mig-15UTI by Platz. The other kit has identical parts in it. The only change is the decal sheet, which has markings for the Soviet A.F. and the E.German A.F. The earlier boxing of this kit has marks for the Finish A.F. and the Polish A.F. and the review can be found in the archives section.

This kit comes in a tray with a lid type box. It is not shrink-wrapped.

​The box art shows a Mig-15UTI against an all white background. Similar to how Tamiya does the marjority of their box arts also.

It is bare metal with Soviet red stars in the usual locations. a black number 18 on the sides of the nose and  a Russian word in black below the canopy. I haven't a clue what it says. There is an illustration of a pilot's head that I believe is Gagarin. He wears white helmet with C C C P on it.

At the bottom of the box art is a story about him and the plane "On March 27, Gagarin and his instructor crashed a Mig-15UTI while in a training flight near Kirzhach. Gagarin died in this crash at the age of 34. The exact cause of the accident is unclear and for a long time it was talked that Gagarin was drunk at the time, but he had passed the medical check before the flight, and all evidence of any drinking was never found in the investigations performed posthumously."

At one corner of the box art there is color illustrations of the nose weights and decal sheet in the kit.

One side panel has two paragraphs in Japanese, followed by color side profiles of the Mig-15. 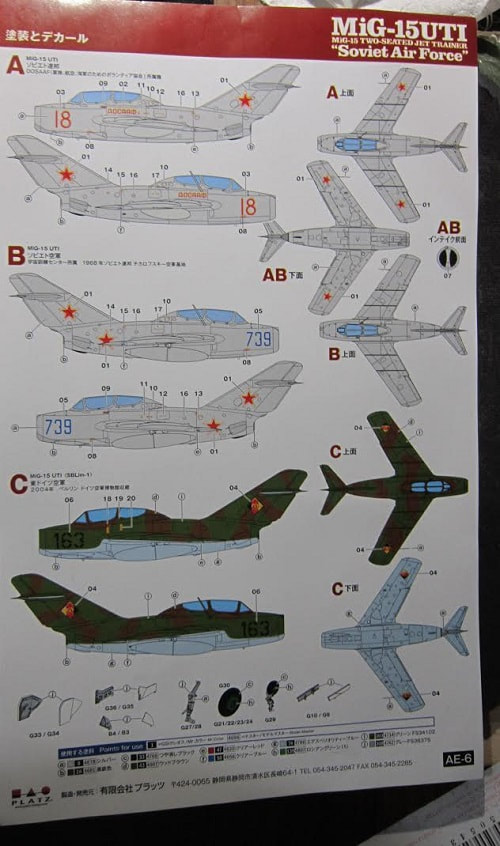 ​One is bare metal with Soviet red Stars in the usual positions and a black 739 on the sides of the nose. The second one is in a wave pattern of 2 greens above light-gray undercarraige. It carries East German A.F. insignia and a stenciled black no. 163 on the sides of its nose.
The captions for these two is in Japanese only.

The other side panel has 2 color walk-around type photos of the model made up in the Soviet markings.

In Japanese and English it says:

This is a plastic unassembled scale model kit. Glue and paint not included. Some parts are extremely sharp. Handle carefully. Do not use near fire while using glue or paint. Suitable for age 15 to adult.

The bottom of the tray has a support base to cut out to use to hold the model while you work on it. 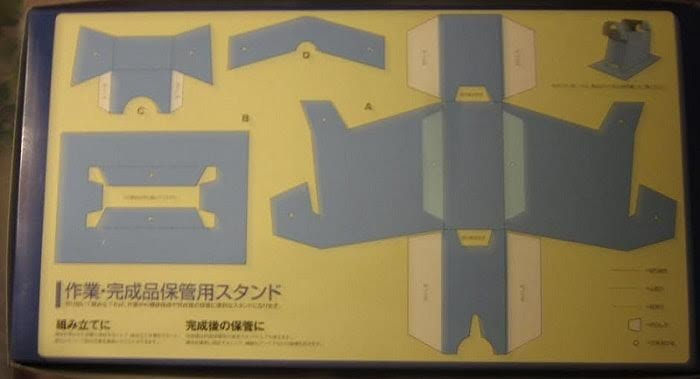 ​One side panel of the tray shows PE wing flap that Platz markets for this kit as set no. M72-41. and a masking set M72-3 for canopy painting.

The decal sheet has a tissue to protect it's face from scratching and it is in a further sealed cello bag along with 2 white metal nose weights that are also in their own little cello bag. Very good packaging !!

The instructions complete the kit's contents. It consists of a single sheet folded in the center to create 4 pages in 7" x 11 3/4" page format. It is printed on slick-coated paper and the text is all in Japanese except for Platz's telephone and FAX no. which are in English. Additional English in the instructions would help.

The middle of the page has the parts trees, decal sheet and white metal parts illustrations.
At the bottom of the page is the 3 assembly steps for making the cardboard support stand.
Pages 2 through 4 show 20 assembly drawings that are not numbered. The text with them is all in Japanese.

The first medium-grey tree is letter B. It holds: wing halves, elevators, flaps etc. (14 parts) Three parts are shown shaded out on the parts trees illustrations as being excess and not needed to complete the kit. 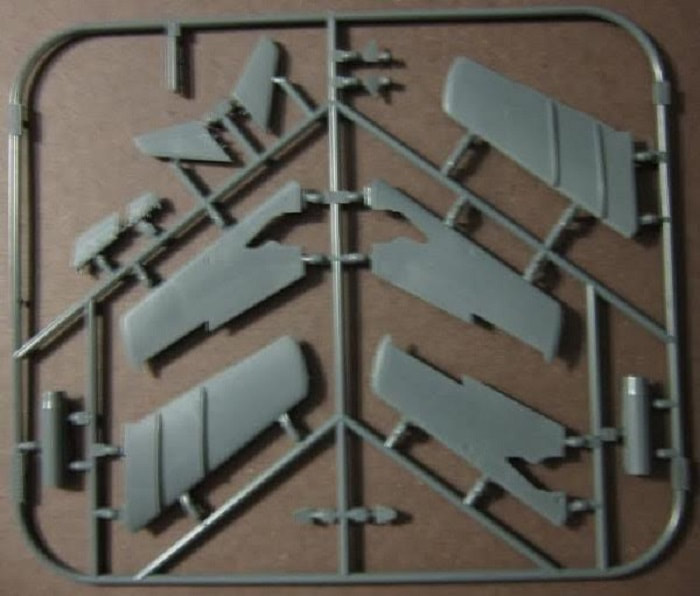 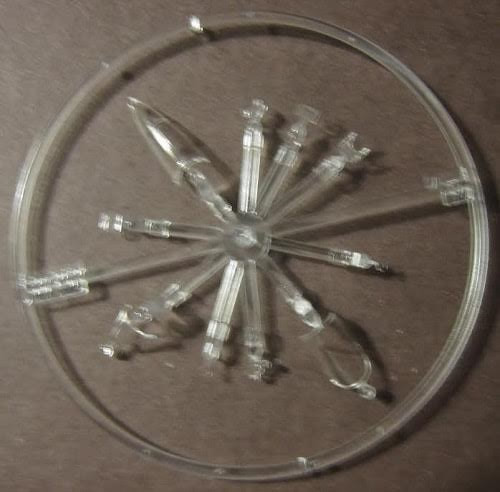 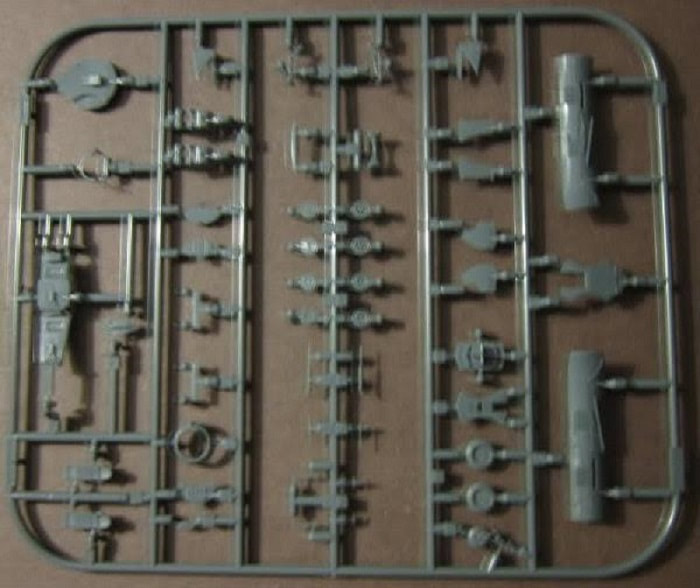 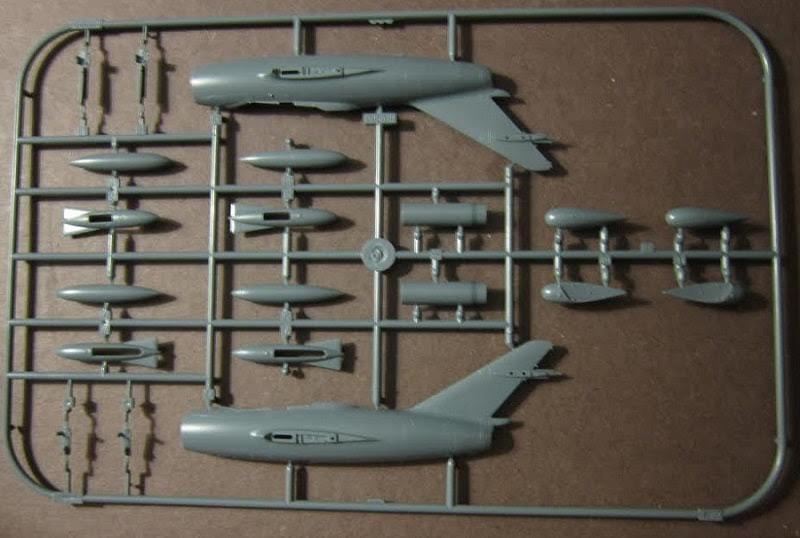 ​​The 2 white-metal nose weights and the decal sheet complete the kit's contents.

​The decal sheet has a frosted sheet on it's face to protect it form scratching. 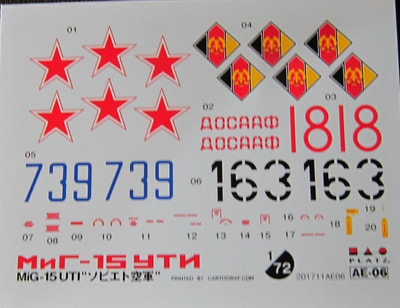 ​​This is a very nicely detailed kit. Highly recommended.

I want to sincerely thank the folks at Platz for this review sample. Their products can be seen at:
http://platz-hobby.com/
​