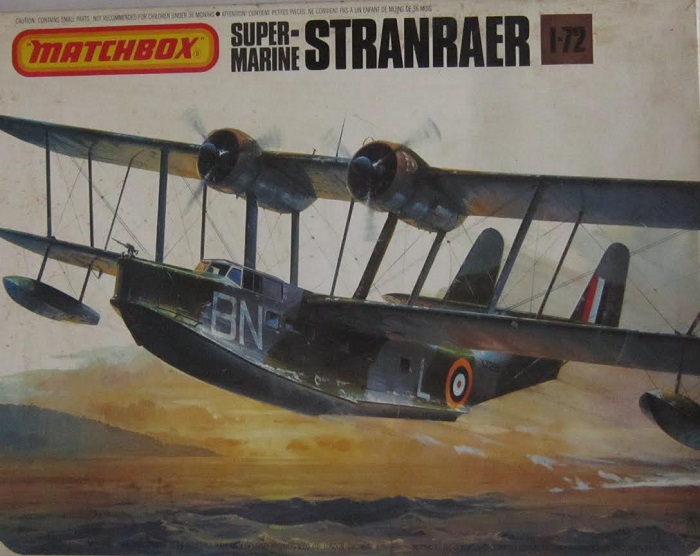 
OUT OF PRODUCTION
HISTORY:
The Supermarine Stranraer was a 1930s flying boat designed and built by the British Supermarine Aviation Works company principally for the Royal Air Force. They entered operations in 1937 and many were in service at the outbreak of the Second World War undertaking anti-submarine and convoy escort patrols. They were withdrawn from operational service in March 1941 but continued to serve in a training capacity until October 1942.

​In addition to the British-built aeroplanes, the Canadian Vickers company in Montreal, Quebec, built 40 Stranraers under licence for the Royal Canadian Air Force.

Pacific coasts, and remained in service until 1946. Following their withdrawal from military service, many Canadian Stranraers were sold off to fledgeling regional airlines and they served in commercial passenger and freighter operation well into the 1950s.
Designed by R. J. Mitchell as a tender to Air Ministry R.24/31 Specification for a coastal reconnaissance flying boat for the RAF, it was initially turned down but Supermarine proceeded with the type as a private venture first known as the Southampton V. A contract was placed in 1933 for a prototype powered by two 820 horsepower (610 kW) Bristol Pegasus IIIM engines and the type became known as the Stranraer.

The structure was mainly duralumin, with the hull covered with sheet metal and the wings with fabric.
Following the initial flight-test programme, the Stranraer prototype (K3973) on 24 October 1934 was delivered to the RAF. On 29 August 1935, an initial order was placed for 17 aircraft (serial numbers K7287 to K7303) to the Air Ministry Specification 17/35.

The production version was fitted with the 920 horsepower (690 kW) Pegasus X and first flew in December 1936, entering service operations on 16 April 1937; the last Stranraer was delivered 3 April 1939. An additional order for six aircraft (K9676 to K9681) was placed in May 1936, but subsequently cancelled.

​A total of 40 Stranraers were built in Canada by Canadian Vickers Limited; Supermarine and Canadian Vickers being subsidiaries of Vickers-Armstrongs.
In service, only 17 Stranraers were operated by the RAF 1937–1941 primarily by No. 228, No, 209 and No. 240 Squadrons along with limited numbers at the No. 4 OTU. Generally, the aircraft was not well-received as its performance was considered marginal.

Due to its less than favourable reception by flight and ground crews, the Stranraer gained a large number of derisive nicknames. It was sometimes referred to as a "whistling shithouse" because the toilet opened out directly to the air and when the seat was lifted, the airflow caused the toilet to whistle. The Stranraer also acquired "Flying Meccano Set," "The Marpole Bridge," "Seymour Seine Net," "Strainer," "Flying Centre Section of the Lion's Gate Bridge" as well as a more genteel variant of its usual nickname, "Whistling Birdcage."

Royal Canadian Air Force Stranraers were exact equivalents of their RAF counterparts and they were employed in coastal patrol against submarine threats in a similar role to the British Stranraers. One source states no enemy action was recorded. However, the crew of a 5 Squadron Stranraer, flown by Flight Lieutenant Leonard Birchall, were responsible for the capture of an Italian merchant ship, the Capo Nola, in the Gulf of Saint Lawrence, hours after Canada declared war on Italy on 10 June 1940.

Thirteen examples were sold through Crown Assets (Canadian government) and passed into civilian use after the war, several serving with Queen Charlotte Airlines (QCA) in British Columbia and operated until 1957. A re-engine project by the airline substituted 1,200 horsepower (890 kW) Wright GR-1820-G202GA engines in place of the original Pegasus units.

​Queen Charlotte Airlines became at one point the third largest airline in Canada, however it was popularly known as the Queer Collection of Aircraft. With limited money, it flew an eclectic mixture of types that were often the cast-offs of other operators. However, in QCA use, the Stranraer gained a more suitable reputation and was "well liked" by its crews. A total of eight surplus Stranraers were also sold to Aero Transport Ltd. of Tampa, Florida.
THE KIT:
Matchbox was based in the UK when they released this kit.

This kit came in a shrink-wrapped tray an lid type box.

The box art shows a Stranraer flying near a coastline. It is in a wave-pattern of slate-grey over sea-grey over aluminum undercarriage.  It carries the sky colored letters BN on the sides of the nose and a sky letter L before the fuselage British roundel just in front of the tail. A black serial no. K7295 is behind the fuselage roundel. A red, white and blue vertical flash is on the rudder. The cowling fronts are dark green and there are dark green panels under the lower wings.with British roundels.

One side panel has a color illustration of the Stranraer showing it is molded in 3 colors of plastic, followed by the 1978 copyright date and Lesney Products & Co. Ltd and printed and made in England. Specifications and color of contents subject to amendment, in 3 languages including English.

The other side panel has 3 color profiles of schemes for the Stranraer:

2.    A Stranraer with RAF no. 228 Squadron, Penbroke Dock, South Wales, April 1937 – September 1938. It is overall aluminum with 2 dark green panels below the bottom set of wings and dark green engine cowling fronts. British roundels are under the lower wings and on the fuselage sides. Serial no. K7287 is in black on the rudders and repeated behind the fuselage roundel on the sides. A black letter L is on the sides of the nose and a large black K7287 is under the bottom wing on both sides.

​3.    A Stranraer with RAF no. 209 Squadron, Mountbatten, Plymouth, England, December 1938 –September 1939. It is overall aluminum with 2 dark green panels underneath the lower wings and has the dark green engine cowling fronts also. Under the lower wings is the black serial no. K7289 on both sides with British roundels. A black letter K is on the rudder sides. Behind the fuselage roundels is a small black K7289.
WHAT’S IN THE BOX:

​This kit contains a green tree, 2 green fuselage halves, 2 light grey trees, a medium brown tree and a clear tree of parts. All are loose and not cello bagged.

The box is blousy and has a 2” wide letter L void around the parts trees. A cardboard sheet is stuffed into the end of the tray to take up the over-length of it. 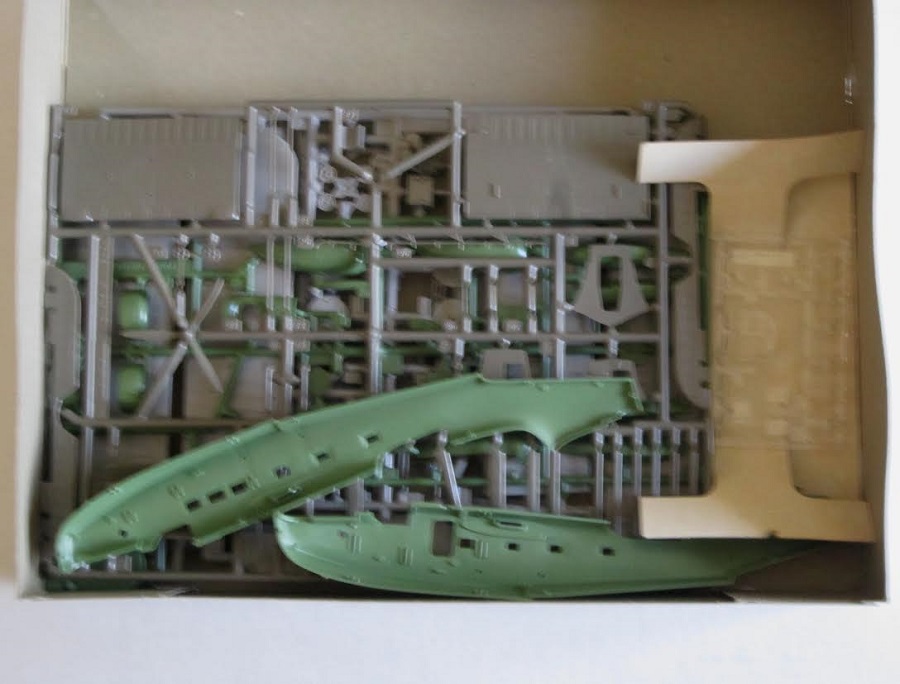 The decal sheet and instructions completes the kits contents.

​The instructions consist of 2 sheets, each folded in the center to create 4 pages in 10” x 14 ½” page format.

Page 1 of one of these sheets has a black and white repeat of the box art on it and a one paragraph history of the Stranraer in 6 languages, including English.

Page 1 of the second sheet begins with a color listing in the 6 languages, followed by illustrations of individual kiit parts that need detail painting during assembly and the decal application instructions. 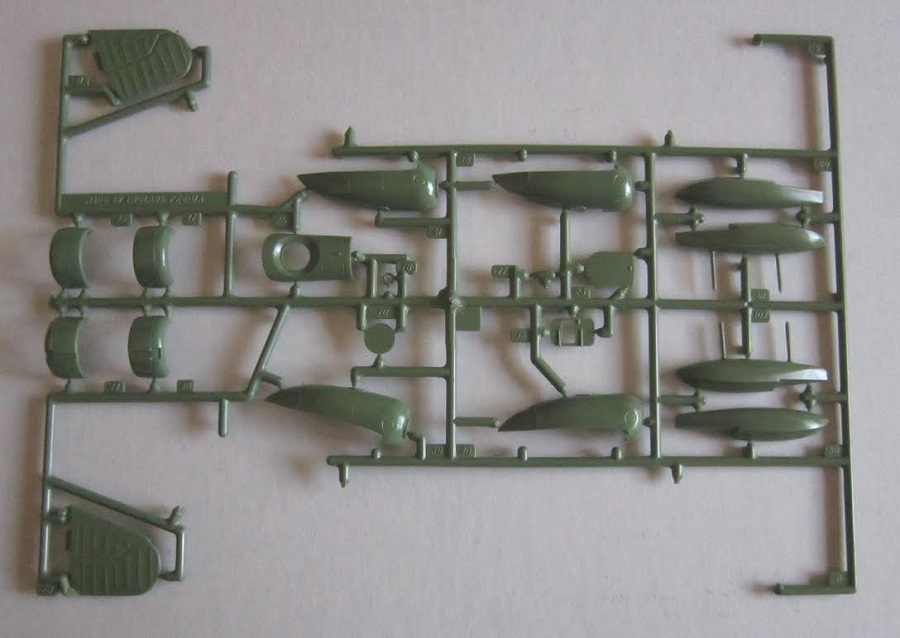 Next is the 2 green fuselage halves. 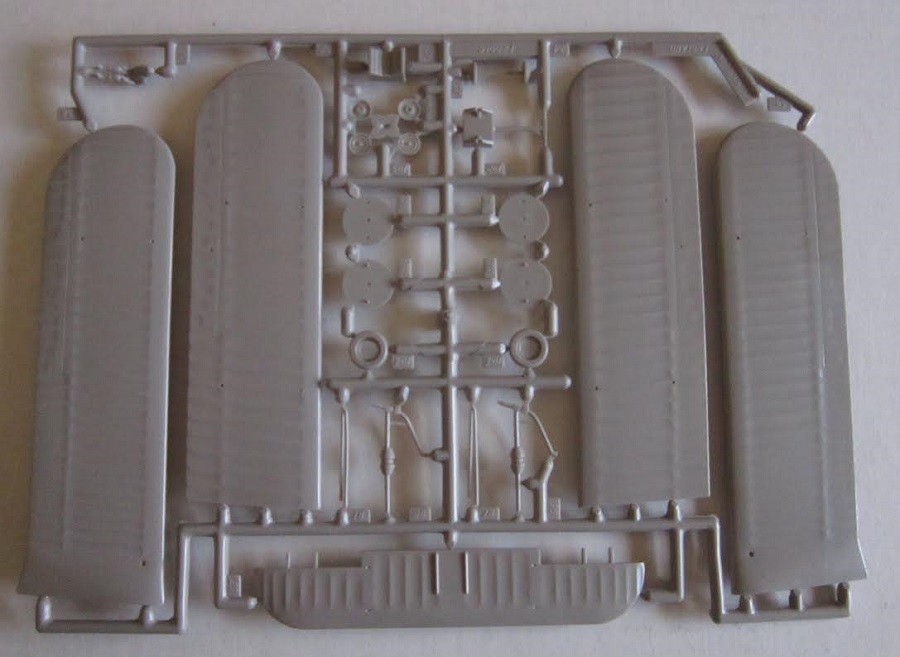 The other light grey tree holds: engine cylinders, 3 crewmen, a ladder, the other halves of the wings and the elevator, pilot seat, machine guns etc. (22 parts) 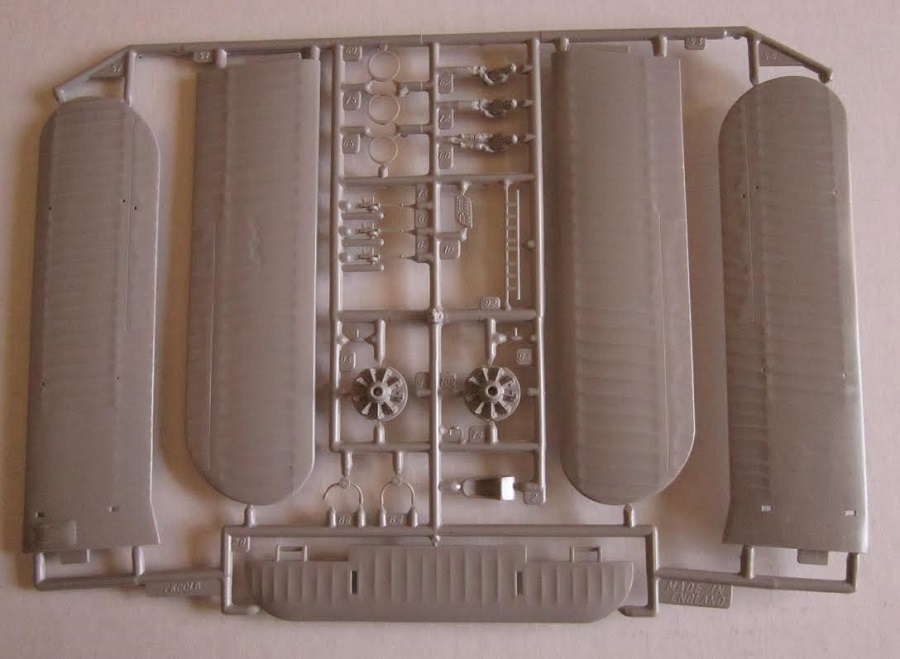 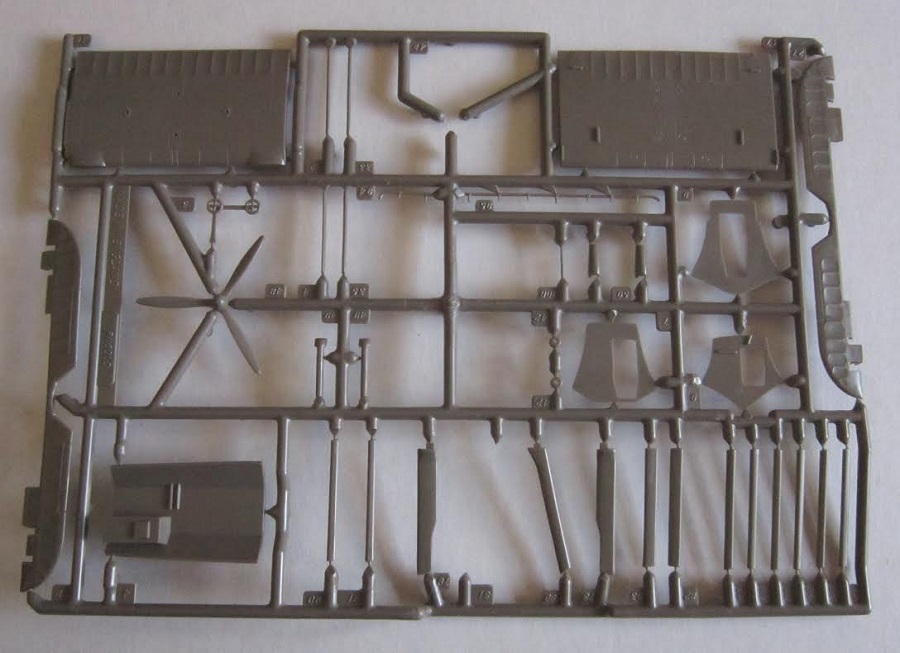 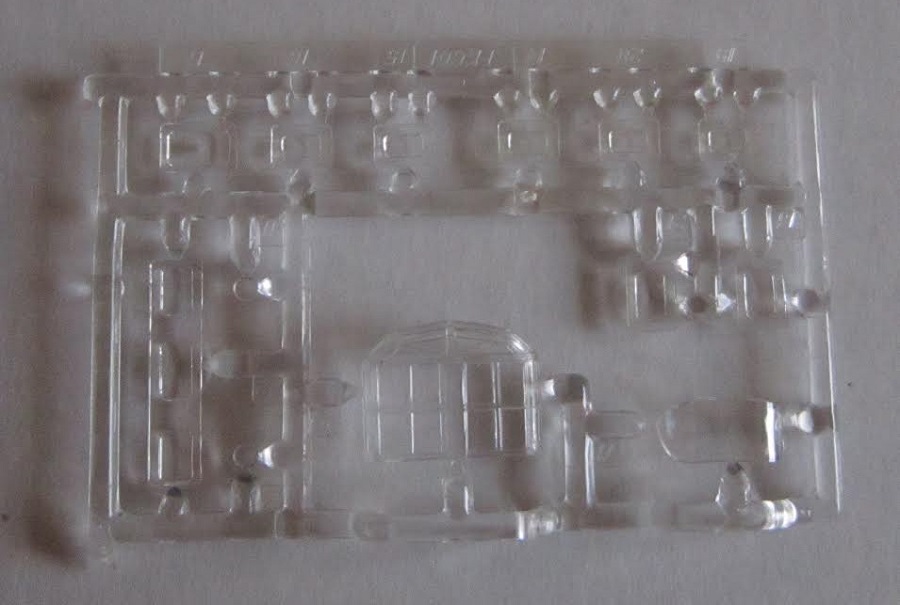 The decal sheet is last. In addition to the 3 schemes, there are rows of black footprint illustrations. These are shown to be put on wings and elevator leading edges. Probably to tell ground crews where it is safe to walk ? The decal has a tissue on it’s face to prevent scratching of the images.

The box art shows a lot of cable bracing between the wings. Careful study of it will be necessary if a modeler opts to do the rigging. Not a chore I personally would look forward too !

​This is a nice older kit that was courtesy of my wallet years ago.