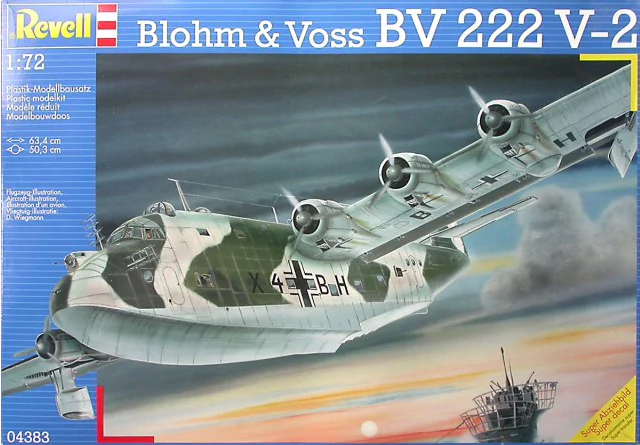 The Blohm & Voss BV 222 Wiking (Pronounced "Viking") was a large, six-engined German flying boat of World War II. Originally designed as a commercial transport, it was the largest seaplane to attain production status during the war.

After being overhauled at Hamburg, V1 was sent to Athens, from where it carried supplies for the Afrika Korps, making 17 flights between 16 October and 6 November 1941.

The V1 was at this time unarmed, and was given an escort of two Messerschmitt Bf 110 heavy fighters.

The registration was changed to X4+AH at the same time and the V1 formed the basis for the new air transport squadron Lufttransportstaffel 222 (LTS 222).
Between 1942 and 1943, the aircraft flew in the Mediterranean theatre, until in mid-February 1943 it sank following a collision with a submerged wreck while landing at Piraeus harbor.

The V2 (CC+ER) made its first flight on 7 August 1941, and after extensive testing was assigned to LTS 222 on 10 August 1942 as X4+AB. Since the aircraft was intended for long-distance overwater flights.

In addition to the armament fitted to the V1 it received two rear-facing wing-mounted turrets with dual 13 mm (.51 in) MG 131s, accessed via the tubular wing spar which was 1 m (3 ft 3 in) in diameter.

In 1944, the V2 participated in Operation Schatzgräber ("Treasure Seeker"), the code name of a German weather station at Alexandra Land in the Arctic, whose sick crew needed to be evacuated.

The BV 222 dropped a spare wheel for a Fw 200 which had sustained damage during landing near the station.

It was destroyed along with V5 on 20 June 1943 at Biscarrosse by RAF de Havilland Mosquitos of No. 264 Squadron RAF.

V4, which had an altered height tail, was also assigned to LTS 222 for Africa flights.

Following the Invasion of Normandy in June 1944, the remaining BV 222 aircraft were transferred to KG 200.[7] Of these, C-09 was probably the BV 222 reported to have been strafed and destroyed by Hawker Typhoon aircraft of No. 439 Squadron RCAF on 24 April 1945 at Seedorf.

V7 and V4 were scuttled by their crews at Travemünde and Kiel-Holtenau airport respectively, at the end of the war.

C-10 was probably the BV 222 reported shot down southwest of Biscarrosse on the night of 8 February 1944 by a Mosquito of No. 157 Squadron RAF.

Since the war this has often been mistakenly quoted as a BV 222 shooting down an Avro Lancaster.

Following the German invasion of the Soviet Union in June 1941, plans were made to connect Germany and Japan by air using Luftwaffe aircraft modified for very long range flights since commercial flights to the Far East by Lufthansa were no longer possible, and it had become very dangerous for ships or U-boats to make the trip by sea.

Field Marshal Erhard Milch authorized a study in to the feasibility of such direct flights and various routes were considered, including departing from German-occupied Russia and Bulgaria, and a sea route using a BV 222 flying from Kirkenes in north Norway to Tokyo via Sakhalin Island, a distance of 6,400 km (4,000 mi).

The BV 222 was one of three aircraft considered seriously for the program, along with the Focke-Wulf Fw 200 and the Heinkel He 177.

The He 177 was ruled out due to it being considered unreliable and in 1943 the Junkers Ju 290 was selected for the flights.

After testing at Marine Aircraft Experimental Establishment at Felixstowe it was assigned to No. 201 Squadron RAF, who operated it up to 1947, when it was scrapped.

C-011 and C-013 were captured by US forces at the end of World War II. On August 15 and again on August 20, 1945 LT Cmdr Richard Schreder of the US Navy performed test flights along with the German crew of one of the BV 222 aircraft that had been acquired by the US.

In two flights resulting in a total flight time of 38 minutes they experienced 4 engine fires. While many spare engines were available they were of substandard quality due to the lack of quality alloys near the end of the war, and caught fire easily.

Other reports indicate the US captured aircraft were flown or shipped to the US. Convair acquired one for evaluation at the Naval Air Station Patuxent River, the intensive studies leading to the hull design of their Model 117 which in turn led to the R3Y Tradewind.[14] Their subsequent fate is unknown.

The V2 aircraft briefly wore US markings in 1946. The V2 aircraft had identification markings from the original V5 aircraft for Operation Schatzgräber.
V2 was later scuttled by the British who filled it with surplus waste from the base at Ilsvika to weigh it down. V2 was towed to a position in Trondheimsfjord between Ilsvika and Munkholmen, where it now rests on the seabed at 65 m (213 ft) deep, perfectly preserved due to low oxygen levels in the water. There are plans to raise and restore this aircraft.

The box art shows a BV-222 that is in a overall base of white with dark green wave pattern on it. The black fuselage code is 4 + BH on the sides of the fuselage and under the wings. It is flying low over a U-boat.

One corner of the box art says the kit contains a Super decal.

One side panel says the kit contains 282 pieces. A listing of suggested Revell brand paint colors is shown.

This is all in 4 languages, including English and followed by 5 color walk-around type photos of the model made up.

​The other side panel has a one-paragraph history of the BV-222 in the 4 languages, followed by the copyright date of 2002, kit was made in Poland and printed in Germany. Revell's address in Germany is provided.

It is stated that paint and cement are not included. Length of the model is 63.4 cm (25"), pictorial multi-linguish instruction sheet provides precise assembly instructions, kit is suitable for ages 13 to adult, in 7 languages, including English.

The kit holds 6 chalk-white parts trees, a clear tree, the decal sheet (with a tissue cover) and the instructions in 4 clear cello bags.

Page 1 begins with a black and white photo of the BV-222 made up in the box art scheme, over the history of the aircraft in German and English.

Page 2 has READ BEFORE YOU BEGIN instructions, with illustrations of tools to use, in multiple languages, including English.

Page 3 has international assembly symbol explanations in the multiple languages.

Page 3 is a listing of paint colors suggested to use, again in the multiple languages.

Page 4 has parts trees illustrations for 4 of the chalk-white parts trees.

Page 5 has parts trees illustrations for the other 2 chalk-white trees and the clear parts tree at the top of the page, over the first 5 assembly steps.

No swastika is shown anywhere in the illustrations on the box or the instructions and is not included on the decal sheet. This is to keep the kit POLITICALLY CORRECT in Germany and other countries where the emblem is outlawed.

The trees are not alphabetized. They are illustrated in the instructions and have part number tabs next to the parts on the trees.

I will not attempt to name all the parts on these trees. There are just too many parts to try and do that and, honestly, until the kit is built I don't know what the majority of the parts are. 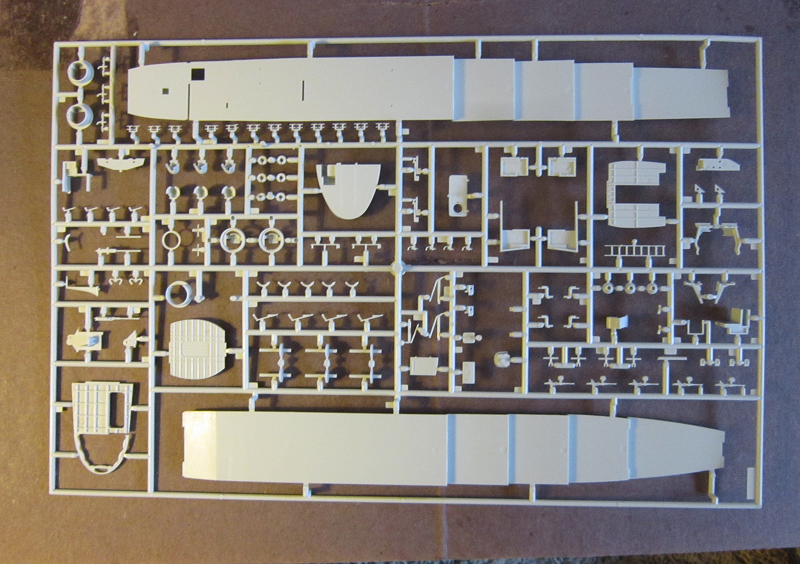 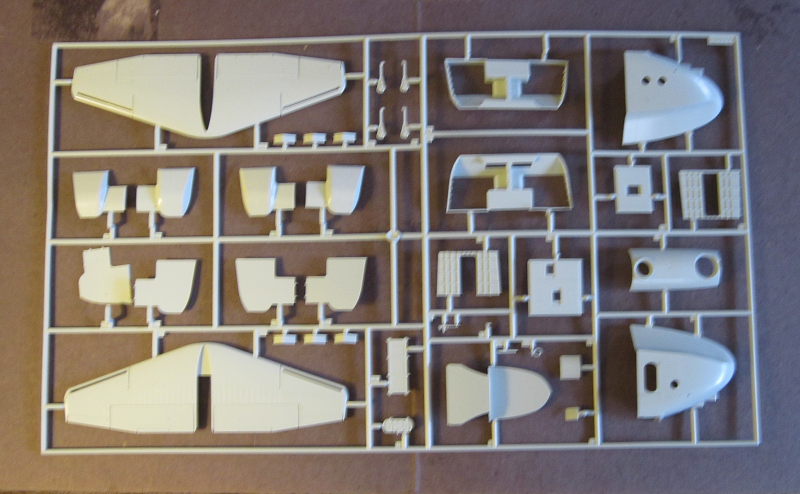 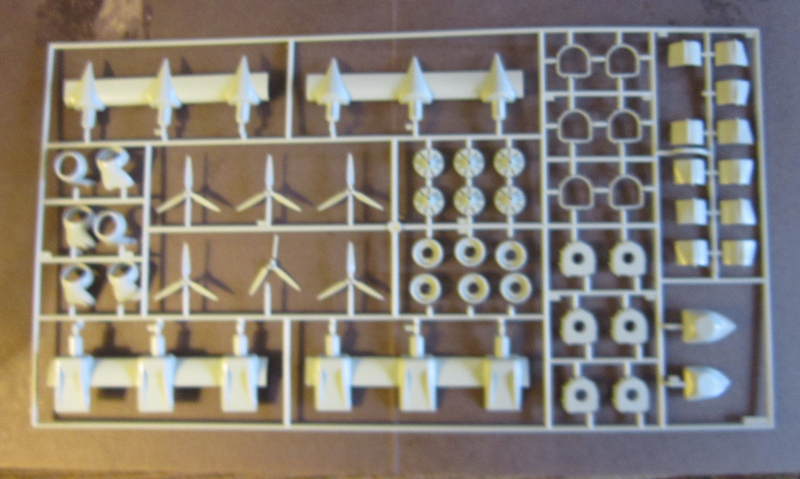 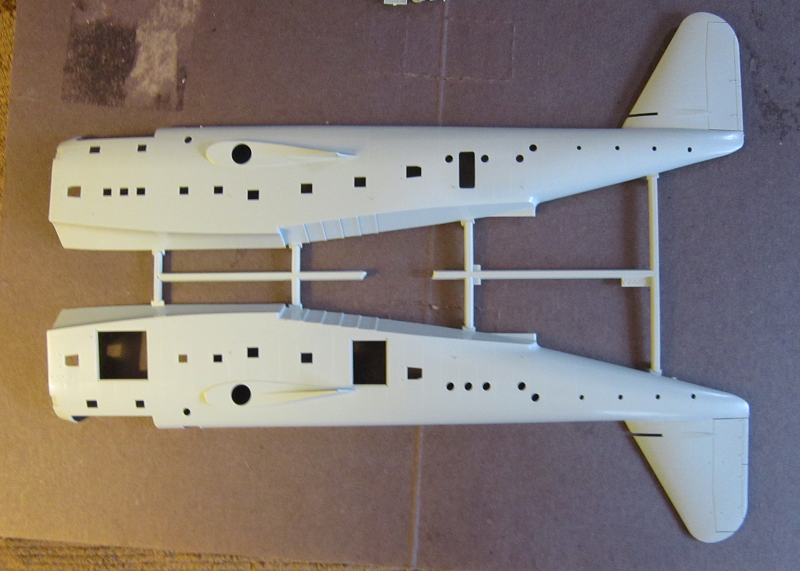 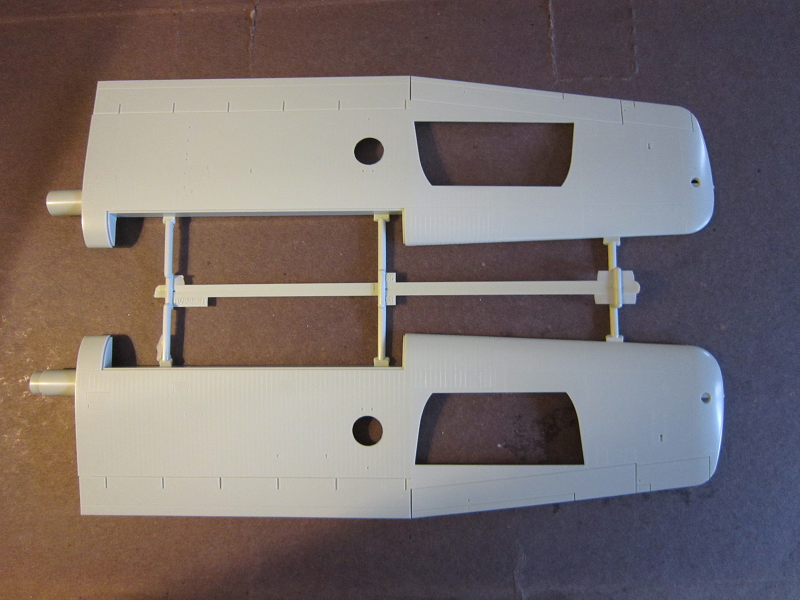 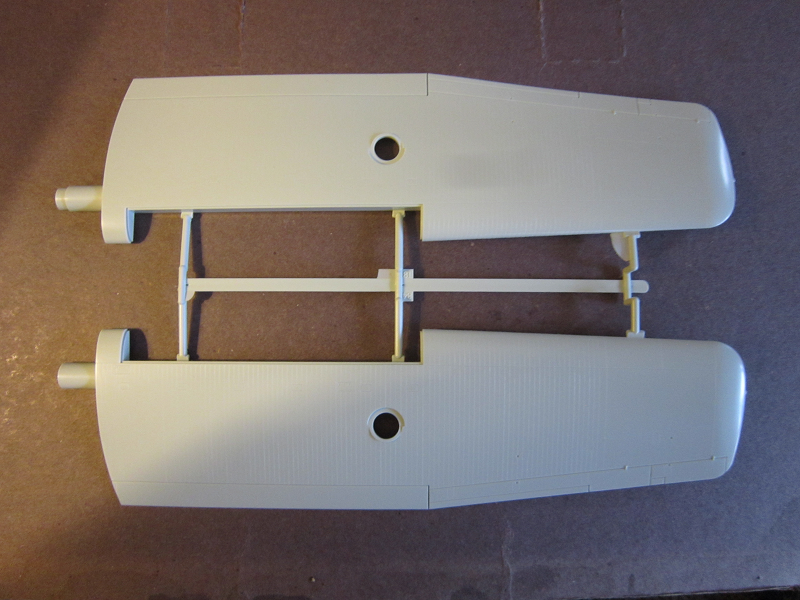 There are no crew figures included in the kit. 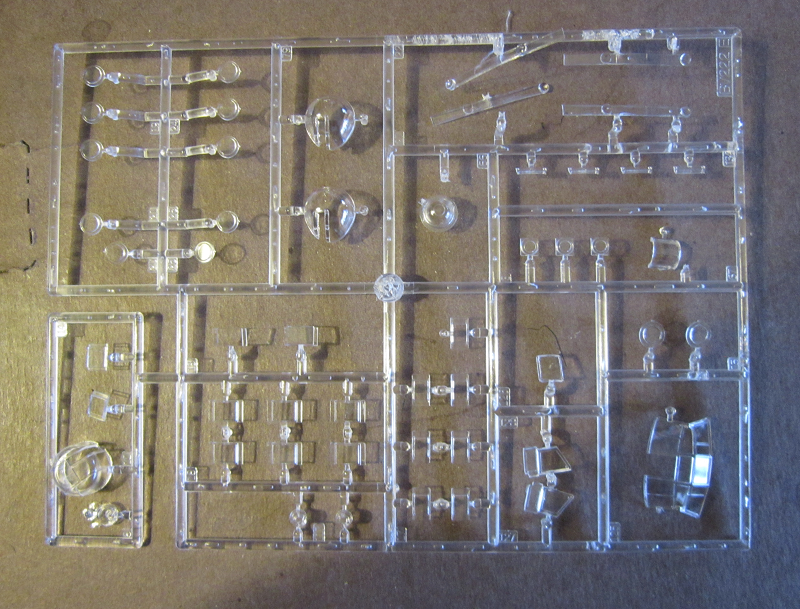 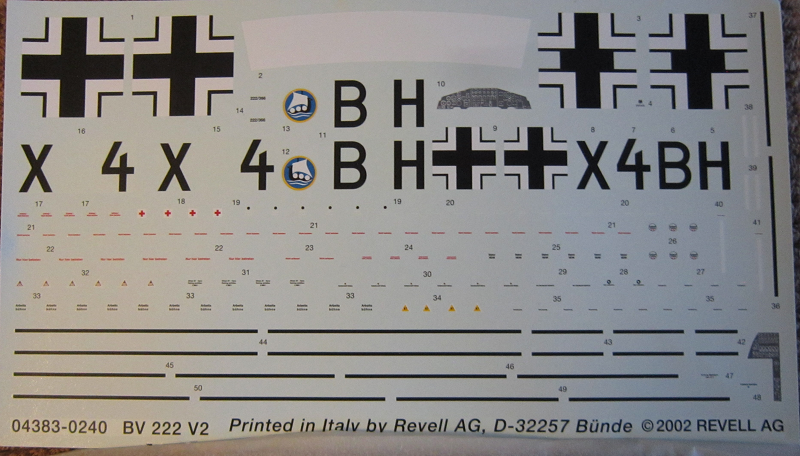 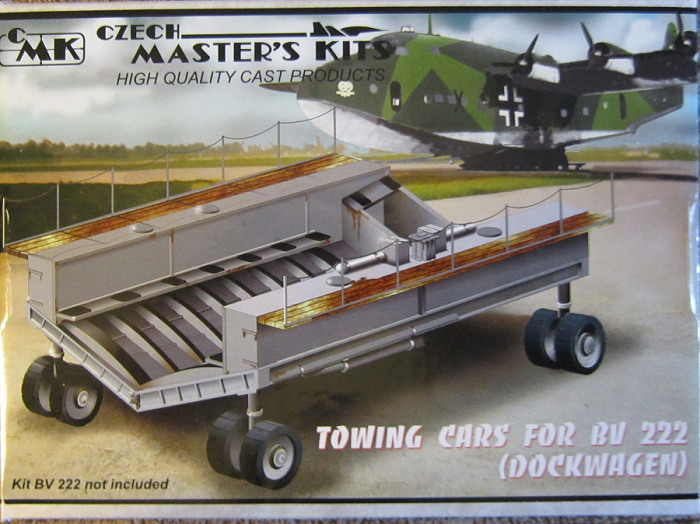 The kit does not include landing gear. So the model would have to sit on it's belly, leaning to one of the wing floats. Not to my taste or most modeler's either. So, I purchased this CMK kit.

CMK is based in Prague, Czech Republic.

It comes in a generic hinged box with a locking tab closure.

The box art is a color illustration of the cart and the BV-222.

The kit contains a steel PE fret, sealed in clear plastic sheet, and 2 self-locking bags of light tan resin parts and the instructions all wrapped in bubble pack.

The instructions consists of a single-sheet folded in the center to create 4 pages in 6" x 8 1/4" page format.

Page 1 begins with CMK's web address, over the parts trees illustrations and the 1st assembly step.

Page 2 to the top of page 4 gives a balance of a total of 6 assembly steps.
The bottom of page 4 has a listing of 12 other 1/72nd scale aircraft accessory kits made by CMK and a suggested color listing of Humbrol brand paint colors.

The light-tan resin parts consist of the cart's base, side walks, bulkheads, end, legs and wheels. 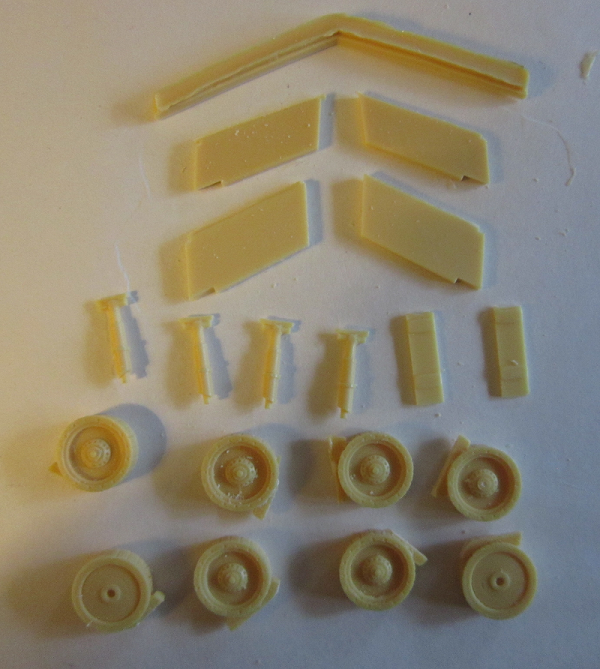 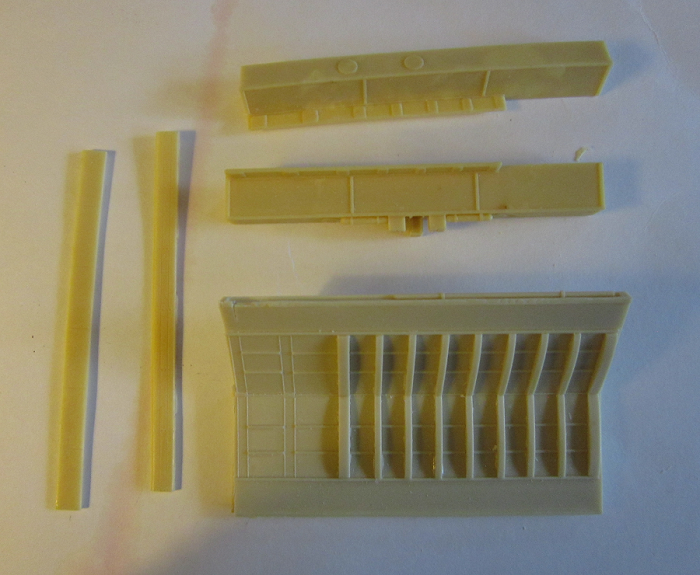 ​The steel PE fret holds the side railings and round hatch lids for openings in the sidewalks.

​Neat detail. Biggest problem is that all the interior detail is not very visible and kind of a waste if you don't do the kit as a cutaway.

Both kits are highly recommended.