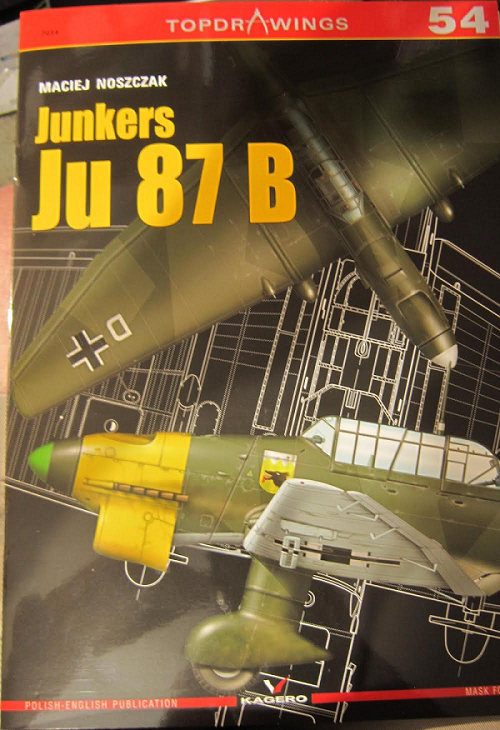 In January 1937, the Junkers factory was ordered to present the successor of the Junkers Ju 87A which should be powered by a stronger engine. The first prototype of the new version was supposed to be tested in the air on June 1937 as the latest. The newest Junker's engine, the Jumo 211A, was predicted to power the plane.

The serial variant of the new Stuka was named the Junkers Ju 87B-1.
The particular production series of the Ju 87B-1 varied with exhaust systems. The B variant received new reinforced main undercarriage with a single forked leg and additional  spring absorber on the mounting point in the wing. The rear struts used before were removed. The canopy shape also was changed, now it was divided into four parts.

The armament was enlarged by one fixed MG 17 (cal. 7.92 mm) machine gun installed in the left wing.

In Spring 1939, works on another variant - Ju 87B-2 - were started. The main difference between version Ju 87B-1 was the new engine, the Junkers Jumo 211D. Thanks to the more powerful unit it was possible to increase the bomb load up to 1000 kg. According to the needs there were also the sub variants of the new Stuka U1 - with tropical equipment used on Ju 87B-2/trop U2 - with modified intercom installation, U3 - with additional armor plate behind the pilots seat and armored radio-operator compartment, U4 - with snow skids replacing the wheels (used only on version Ju 87B-1).

The Luftwaffe command in Spring 1940 ordered the Junkers to adapt the Ju 97B-1 and B-2 variants to carry bigger amount of fuel.  The Ju 87R-1 was based on thr Ju 87B-1, despite the changed fuel installation which now could take the fuel from spare tanks. Another variant - Ju 87R-2 - was based on the Ju 87B-2 with Jumo 211D engine. The Ju 87R-1/R-2 planes were equipped with additional radio set. The Ju 87R-3 variant was not produced in series. The last produced version of the Ju 87R was the Ju 97R-4 variant.

Kagero is a publisher based in Lublin, Poland. The do their books in both English and Polish. This book has the text and captions in both languages.

The cover art shows a side view of a B-2, a top view of a B-1 that is the subject of a loose center fold inserted in the book, a side view of of a Ju 87B-2 that is with the Stab I/St.G. 77, Greece, Spring 1941 (full description later), over a white line drawing of a Ju 87 against an all black background.

The reverse side has what I think is a 1/24th scale 3-view of a Ju 97B-1 in a splinter pattern of 2 shades of green over a light-blue undercarriage. It has a white spinner tip and a black diving raven under the cockpit, which is the unit code. The fuselage code is black A5 + white D Black H. The white letter D is repeated above and below the wings.

There is also a black sheet with Ju 87 die cut, self-adhering masks to use on a 1/48th scale kit of the Stuka as a bonus.

The first color side view illustration is of a  Ju87B-1  W Nr. 0870206, fuselage code + white 206, with a red rudder with a white circle with a black swastika on it. It is in a splinter pattern of two shades of green over a light-blue undercarriage. It is shown as it was at Bremen Airfield, Autumn 1938.

The second one is a Ju 87B-1 in same color scheme, with fuselage code black A5 + red A outlined in white, black K. It was flown by Staffelkaitan 2/St.G2 "Immelmann", Nieder-Ellguth, September 1939. The red outlined letter A is repeated on the wing's upper surfaces and undersides, spinner's tip is red and there is a red "PETER" outlined in white on the side of the landing gear.

The fourth  is a Ju 87B-1 in the splinter pattern of 2 greens above a light-blue undercarriage. The fuselage code is black J9 + yellow A black L. The yellow A is repeated above and below the wings. The squadron insignia is a white shield with a red anchor on it with a blue winged German steel helmet over the anchor.

The fifth one is a Ju 87B-2 in the two greens splinter over the light-blue undercarriage. It has a yellow fuselage band and yellow wing tips the fuselage code is black 6G + white D Black R. There is a thin white stripe around the spinner. It has a squadron insignia of a white shield with a red bird on it on the side of the nose. High on the rudder is "Glikol 96. It is with 7./St.G 1 (formerly 7./St.G 51, Russia, Summer 1941.

The sixth one is a Ju87B-2 in the two greens splinter over light-blue undercarriage. It has a yellow fuselage band and yellow wing tips. The fuselage code is black F1 + green B black D. The green B is repeated in black on the lower wing tips. It has a squadron insignia of a yellow shield with a blue top with a knight on horseback on it. It is with Stab III/St.G 77, Crimea, Spring 1942.

The seventh one is the one shown as a side view on the cover. It is in the two greens splinter pattern over light-blue undercarriage. It has a yellow spinner tip and nose and a yellow rudder flap. The fuselage code is black S2 + green D black B. It has a yellow squadron insignia of a yellow shield with white top with a black wolf's head on it. It is with Stab. I/St.G 77, Greece, Spring 1941.

The eigth one is a Ju-87B-2/trop with a sand hull over a light-blue undercarriage, a red spinner tip and white fuselage band. The fuselage code is black S1 + red G black K. It is of 2/St.G 3, Derna Airfield, Libya, Autumn 1941.

The ninth one is a 2-view on the back cover, showing both sides of a Ju87B-2/trop. It is in a sand color that is is borrowed from the Italians and known to them as Giallo Mimetico, with drak green wave pattern over a light-blue undercarriage. It has a red spinner tip with a white band behind it. Down one side of the plane is a illustration of a white snake the whole length of the fuselage. In the two view this is only shown on one side.

This is because the actual plane was only photographed during the war from one side and nobody knows if it appeared on both sides. The fuselage code is black T6 + red A outlined in white and black N, over a white fuselage band. This Stuka is with 5/St.G 2, Tmimi. Libya, September 1941.
This book will be of great interest to both aircraft historians and scale modellers alike.

I want to thank the folks at Casemate Publishing, the North American distributor of Kagero books for this review sample and Kagero also.

All Kagero titles can be viewed on Casemate's web site at:
www.casematepublishing.com