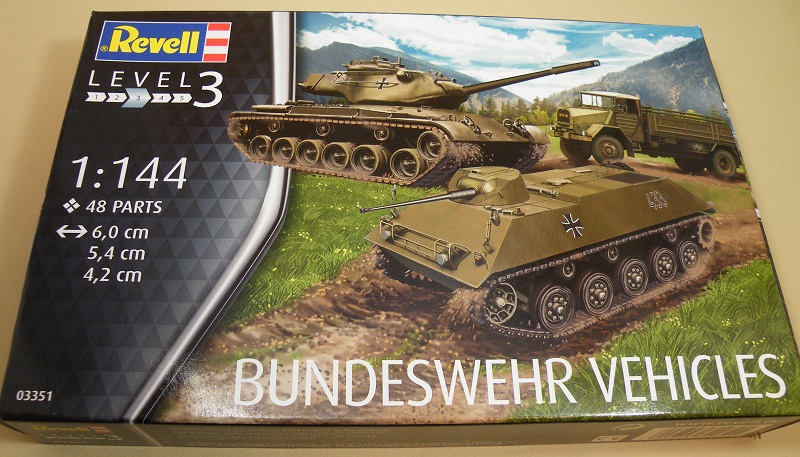 Kit No. 03351
MSRP $9.95
John Kelley
While I was in my local hobby shop I saw this new release on the shelf and since I have an interest in early Bundeswehr armor and wheeled vehicles I decided to pick it up and see what was inside. After getting it home I did a little research on the kit since it is a little unusual to see 1/144 armor in sets and it seems that Revell of Germany are releasing a post war 1/144 Bundesmarine LSM Eidechse (Lizard) Class and this is a load for it. They have also released an American armor version which includes a M4 Sherman tank, an M8 armored car and a GMC CCKW 6 x 6 truck.
THE KIT

The kit comes in a box with end opening flaps. The front of the box has a painting of the kit vehicles while the sides have text describing the kit contents in French,German Spanish and English. On the back is a photo of the kit trees, assembled models and color recommendations for Revell paints. 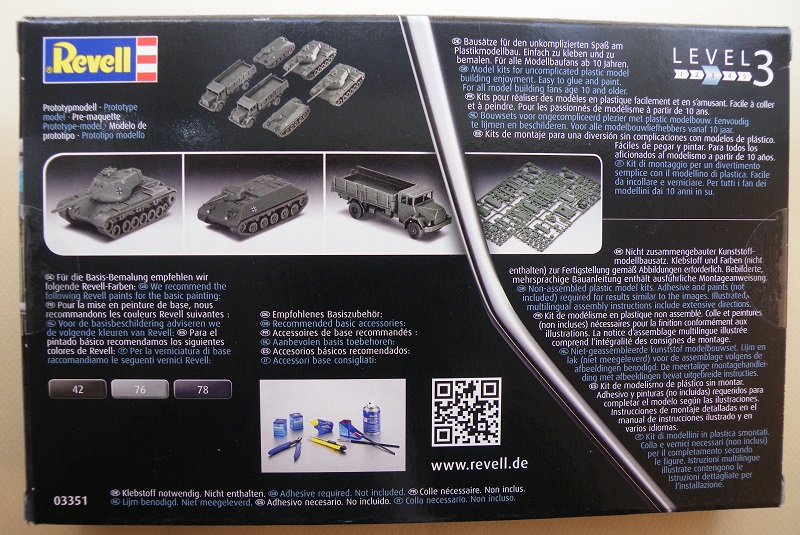 The kit contains two trees of models that include an M47 Medium Tank, HS 30 Armored Infantry Fighting Vehicle, an LKW 5t gl “Emma” cargo truck and a decal sheet that contains enough markings for the M47 and HS 30 models. No license plate numbers for the vehicles are included. 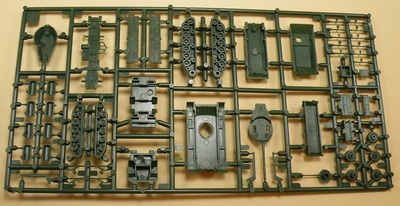 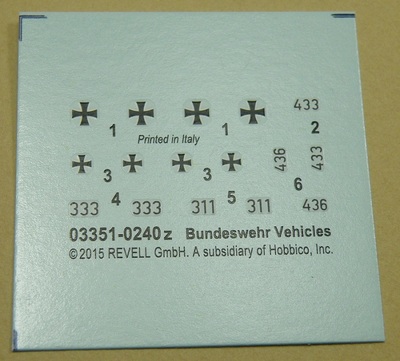 The instruction sheet is 8 1/4 x 11 1/2 inch and has four sheets that are folded in the middle and there are eight pages with color drawings for the symbols, assemblies and color schemes. The instructions printed in multiple languages.

The front page contains a photo of the assembled models and safety advice.

Page 2 has a “tips and tricks” section which are color drawings only and no text.

Page 3 has pictures keys and descriptions on what the keys mean.

Page 4 is the color scheme notes.

Page 5 shows a picture of the parts tree. There are a number of parts not used and I believe these parts are for the LCM. There is also the address for contacting Revell in the event of lost parts.

Page 6 and 7 show the assembly steps for the models.

Page 8 is the decal location and color scheme guide.
​THE MODELS

The two trees are molded in flash free dark green polystyrene and have three models per tree for a total of six models in the box. All of the detail is quite good as the photos in the review show, however, all of the hatches are closed and there are no figures provided in the kit. For the M47 and HS 30 the molded on detail is a little soft but the overall shape of the models looks accurate. I have no plans to compare the models scale accuracy but compared to photos in my Tankograd books everything looks correct in shape. Items such as grab handles and mantlet covers are not molded on. Due to the small size of the models, a little over two inch's long (5.080 cm), the suspension and tracks are one piece with no tread detail on the HS 30 butt for the M47 there are recessed lines molded into the tread for the individual links. The rear plate of the M47 is missing the circular inspection covers but these can be added with disc of styrene. The M47 mantlet cover lacks the folds of the cover but these could be replicated with tissue . 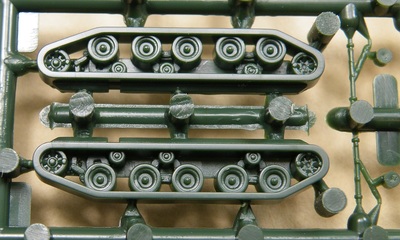 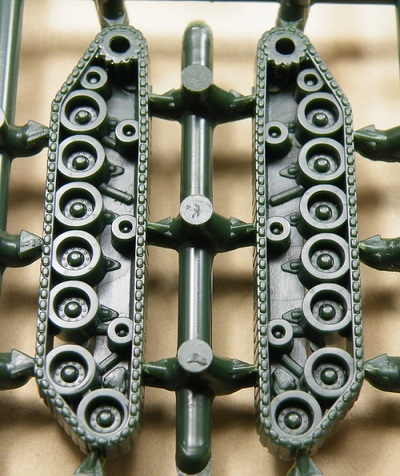 All of the tools are molded onto the models as well as the lights, smoke dischargers and tow shackles. 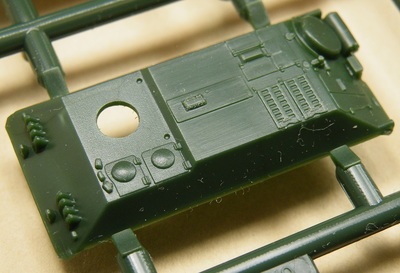 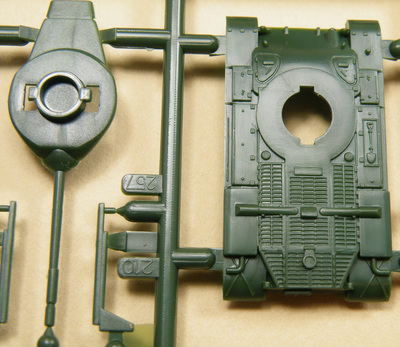 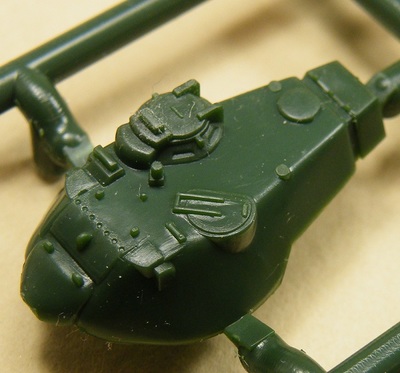 The LKW 5t gl “Emma” is quite nice with good detail on the wheels and the chassis. The side boards for the cargo bed have detail molded into them on both sides and the cab comes with the seats and dash board molded in but no steering wheel or gear shift. Since it is doubtful that the interior will be seen once the cab is added it is not a problem at all. The chassis is a one piece molding with the axles, drive shaft,exhaust and engine half molded onto it. The hood has no grill detail.  The windows are molded open with the post attached to the cab roof and no clear plastic for the cab glass is supplied but it can be added if so desired. Clear sheet plastic, white glue or Micro Scale Kristal Klear can be used for this. 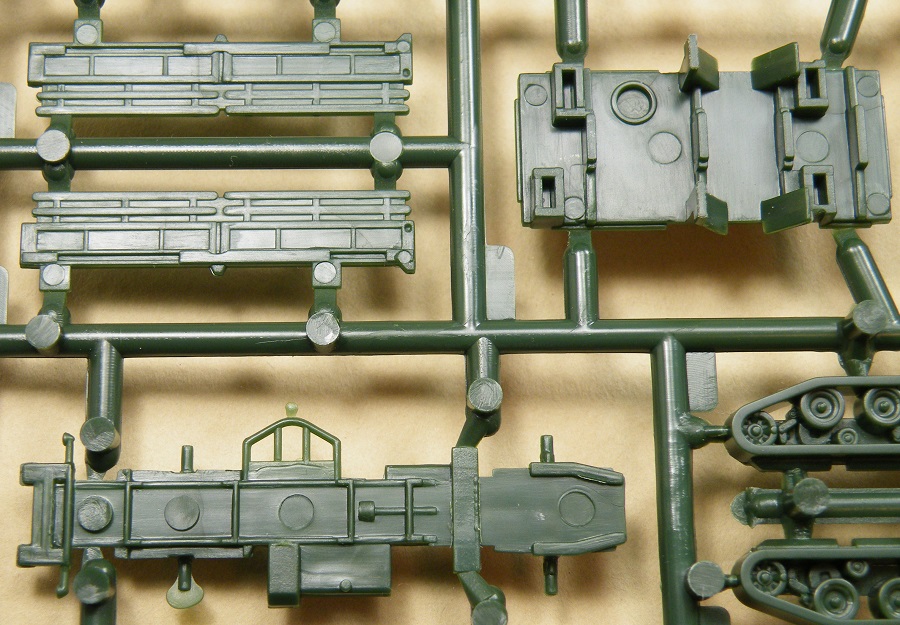 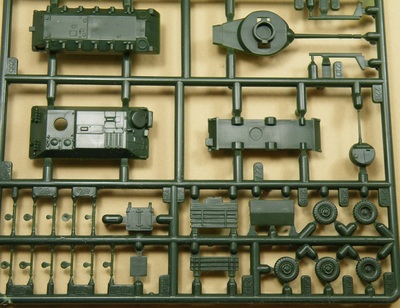 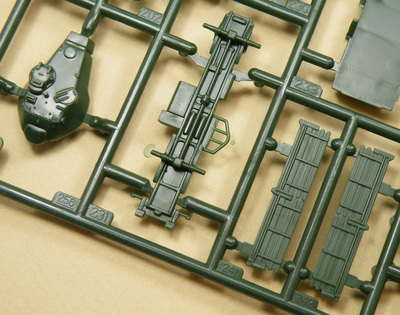 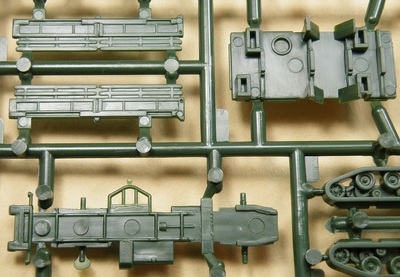 FINAL THOUGHTS
For U.S. $9.95 you get six 1/144 models in one kit which is a great value especially if you use them for war games. Adding a tank platoon or company would not be too costly. The models are well done for such a small scale with good detail molded onto them Grab handles and a mantlet cover could be added if so desired. Hopefully Revell will release more kits in the series such as an M48A2, Hotchkiss Armored Personnel Carrier or M113. I highly recommend this kit.