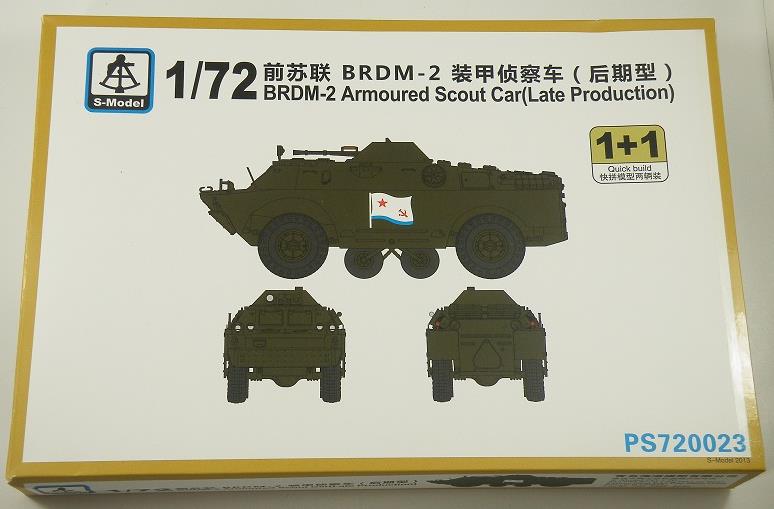 In box review of S-Model BRDM-2

S-Model has recently released a quick build kit in 1/72nd scale of the BRDM-2 Armored Scout Car (Late Production) and for a quick build kit it is as detailed as any non quick build model.  The kit comes with two complete models. The box contains two trees consisting of 56 flash free parts molded in olive colored styrene plastic.  Also included in the kit are decals and a set of photo-etch detail parts.

The instruction comprise a single sheet folded in two with an illustration of the kit on the front as well as painting suggestions.  Since this is mostly in Chinese, I'm not sure who S-Model is recommending for their paints.  The instructions consist of six assembly drawings with arrows to locate where every part is attached to the model. On the back page is a color painting with a markings diagram.  While there are more decal options, the instructions illustrate only one vehicle from the Soviet Naval Infantry. This page is the weakest part of the sheet since, through my research, not all the decals are fixed to the lower sides of the vehicle but some are located by the crew visors. Check your own references if you are marking the model in a version other then what is on the instruction sheet. 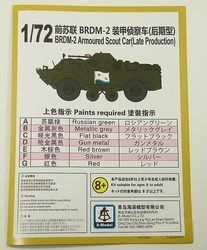 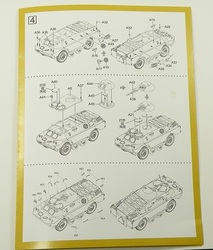 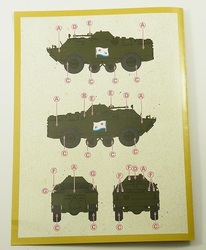 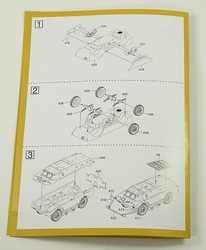 A small sheet of decals is provided with several options.  You can mark the kits up as any of the following:  a Soviet Guards Armored Car, a Soviet Paratroop Vehicle, a Soviet Naval Infantry version as well as a Polish, East German, Romanian and Czech vehicle.  Also included are two small red stars with a hammer and sickle and four sets of numbers; 0 to 9.  This is probably one of the nicest parts of the kit since there is such a variety of options. 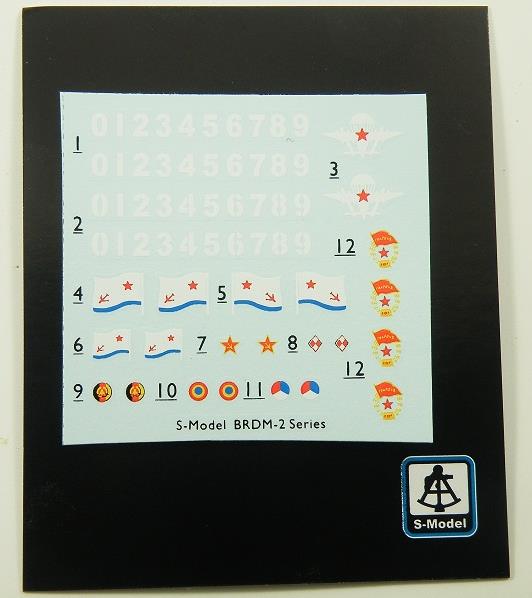 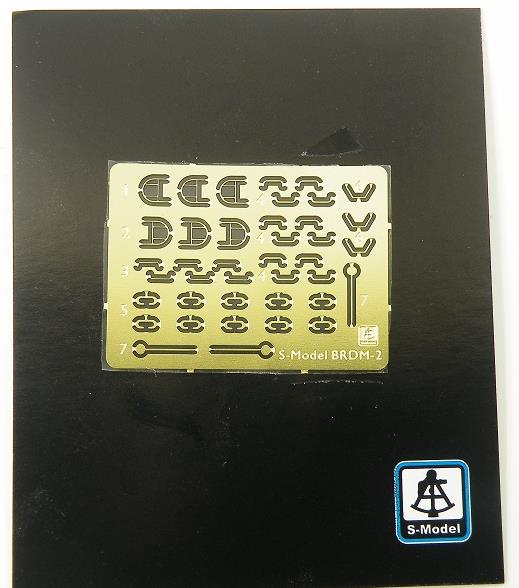 The lower chassis is one piece and the wheels, tires, axles and springs are all well done. The tire treads appear accurate and the smaller central wheels, which are used for going over rough ground, and its suspension are nicely done too. Since this is a quick build kit the axles and springs are one piece with no steering gear or shocks molded onto the springs. The upper hull has fine detail molded onto it with openings for the headlights and location points for the other detailing parts. The kit has a separately molded roof and engine deck and the details on these parts appear correct.  The hatches are molded open and the hatch covers are separate parts. From the break down of the kit it is easy to see that other versions will be made. In fact an anti-tank version is available at the time of this review. What is interesting is these parts are in the kit except for the roof for the anti-tank version. The side pieces have two cutouts and the rear plate has the propeller cover molded closed but the rest of the detail is well done. There are a number of detail parts that are separately molded as you can see in the photos. The hull front shield is separate along with the actuating arms. The turret is a four piece assembly with the cut outs for the 12.7 mm machine gun, coaxial machine gun and periscope molded into it. The machine guns are well done for this scale and are attached to a cylinder that is trapped between the upper and lower turret parts. No interior is included in the kit. 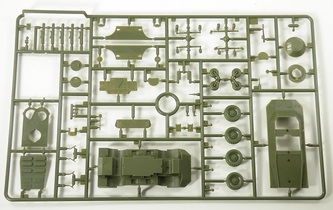 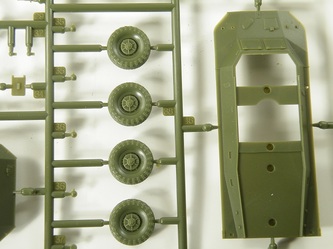 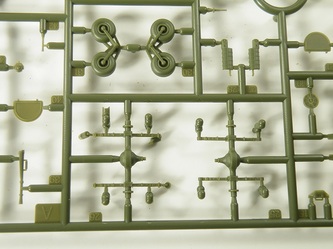 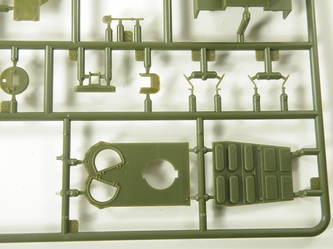 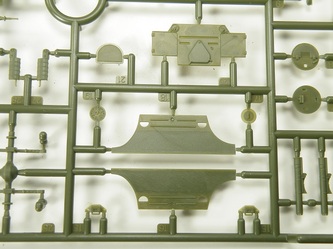 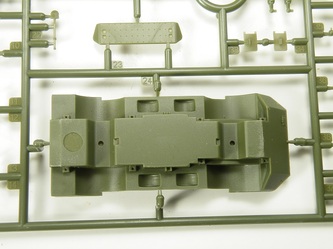 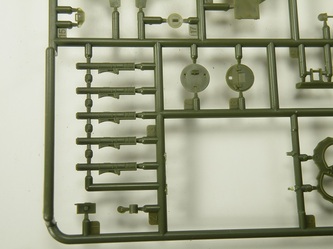 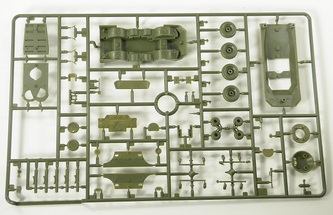 I really like this kit and if you have any interest in modern Soviet armor this is a must have kit. S-model has provided an excellent model kit for super detailing.  While I have not measured the kit against any plans, to me it looks like a BRDM so for me that's good enough.  I'm looking forward to building this kit and as soon as I do, I will add the build to this review.  One of the most pleasant surprises of this kit is the level of detail.  Put this together with the photo-etch parts and the nice selection of various countries on the decal sheet, this kit is a definite winner. I have come to expect this from the more traditional type of models but not from a quick build.  At a time when the average price of a  single 1/72 A.F.V. model is approximately $18.00 this kit may seem a little pricey until you consider that instead of one model you are getting two which equates to about $10.50 per model and includes photo-etch and decals. This is a good deal!  One nice thing is that you can take this model as far as you want.  If you are a war gamer, you can leave off the photo-etch and more delicate items and still have an accurate looking model at a reasonable price. I purchased my kit from Lucky Models.

This kit was a delight to build with no issues at all during the assembly. There is a slight gap between the upper plates and the hull but I did not find this to be a problem so I did not fill in the seams. The photo-etch sheet gives you two additional brush guards and hand holds. I found this to be very thoughtful of S- Model especially for me since I lose such items so easily. I chose to use wire instead of the photo-etch pieces since photo-etch parts do not have the round look that wire does due to the limitations of the process. I did loose the part that is in front of the m.g. turret and that was replaced with wire.

Painting
The model was painted with Tamiya NATO Green XF-67 and the wheels were painted Tamiya Rubber Black TS-82. The m.g. was painted Runefang Steel by Citadel Paints. I coated the model with Future Floor Wax and applied a wash to the detail areas and the m.g. using Vallejo 73201 Black Shade Wash thinned with water. The model was dry brushed with Vallejo 70.830 German Field Grey WWII on the raised detail and the tires were dry brushed 70.862 Black Grey. The tail lights were first painted silver the a coat of Model Master Clear Red was added to them. The front headlights were painted flat black. The model was given a flat coat using The Army Painter Anti Shine Matt Varnish spray paint. I found this to be a very good paint to flatten the gloss of the Future.

Decals
The decals went on very well. I placed a drop of Future on the model where the decals were to go and then applied them. After they dried I added another drop of the Future to reduce the carrier film being seen. These decals are the best I have used in a long time. I only soaked them for about 25 seconds and then applied them. They conformed over the surface detail without the use of decal solvent. I cannot say that I applied the Czech roundels correctly since the only photos I could find are of much later BRDM-2s and the instructions only show decal placement for a Russian vehicle. I did use the Tankograd book No 7010 Czech Republic Army but you need to check you own sources before adding any markings for a vehicle other then what the instructions recommend.
In the end I found this a very enjoyable build and I highly recommend this kit to any modern armor fans. 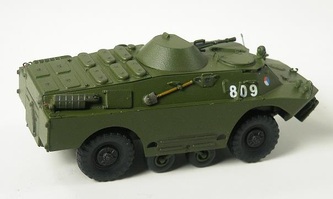 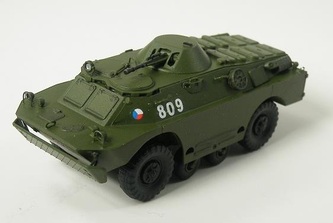 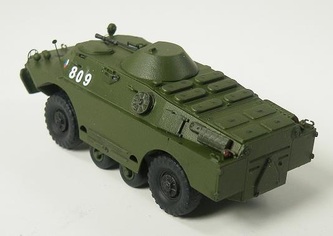 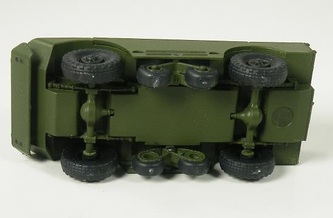