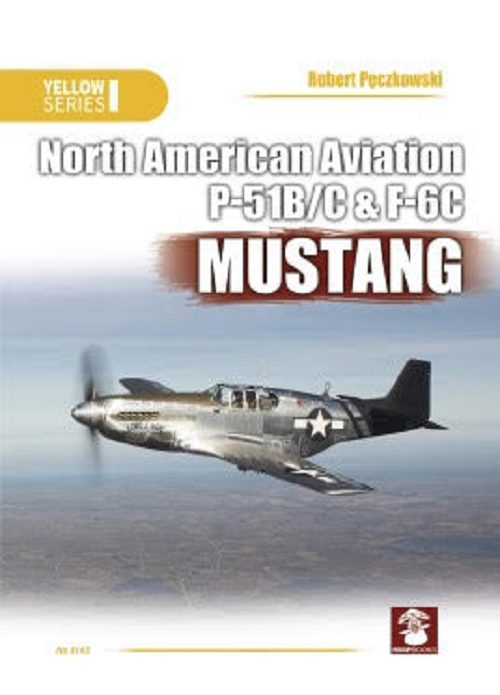 The two XP-51Bs were a more thorough conversion than the Mustang X, with a tailor-made engine installation and a complete redesign of the radiator duct.
The airframe itself was strengthened, with the fuselage and engine mount area receiving more formers because of the 355 lb (161 kg) greater weight of the Packard V-1650-3 compared with the V-1710.

The engine cowling was completely redesigned to house the Packard Merlin, which, because of the intercooler radiator mounted on the supercharger casing, was 5 in (130 mm) taller and used an updraft carburetor, rather than the downdraft variety of the Allison.

To cater for the increased cooling requirements of the Merlin, a new fuselage duct was designed. This housed a larger radiator, which incorporated a section for the supercharger coolant, and, forward of this and slightly lower, an oil cooler was housed in a secondary duct which drew air through the main opening and exhausted via a separate exit flap.

A "duct rumble" heard by pilots in flight in the prototype P-51B resulted in a full-scale wind-tunnel test at NACA's Ames Aeronautical Laboratory.

This was carried out by inserting the airplane, with the outer wing panels removed, into the 16-foot wind tunnel. A test engineer would sit in the cockpit with the wind tunnel running and listen for the duct rumble.

It was eventually found that the rumble could be eliminated by increasing the gap between the lower surface of the wing and the upper lip of the cooling system duct from 1 to 2 in (25 to 51 mm).

They concluded part of the boundary layer on the lower surface of the wing was being ingested into the inlet and separating, causing the radiator to vibrate and producing the rumble.

The production P-51B inlet was lowered even further, to give a separation of 2.63 in (67 mm) from the bottom of the wing. In addition, the shelf above the oil cooler face was removed and the inlet highlight swept back.

It was decided new P-51Bs (NA-102s) would continue with the same armament and ammunition load of the P-51A, while the bomb rack/external drop tank installation was adapted from the A-36 Apache; the racks were rated to carry up to 500 lb (230 kg) of ordnance and were also piped for drop tanks.

The machine guns were aimed using the electrically illuminated N-3B reflector sight fitted with an A-1 head assembly which allowed it to be used as a gun or bomb sight through varying the angle of the reflector glass.

In addition, the extended range made possible by the use of drop tanks enabled the Merlin-powered Mustang to be introduced as a bomber escort with a combat radius of 750 mi (1,210 km) using two 75 US gal (62 imp gal; 280 l) 2-piece, sheet-metal stamped construction drop tanks.

When this tank was full, the center of gravity of the Mustang was moved dangerously close to the aft limit. As a result, maneuvers were restricted until the tank was down to about 25 US gal (21 imp gal; 95 l) and the external tanks had been dropped.

Problems with high-speed "porpoising" of the P-51Bs and P-51Cs with the fuselage tanks would lead to the replacement of the fabric-covered elevators with metal-covered surfaces and a reduction of the tailplane incidence.
With the fuselage and wing tanks, plus two 75 US gal (62 imp gal; 280 l) drop tanks, the combat radius was 880 mi (1,420 km).

Despite these modifications, the P-51Bs and P-51Cs, and the newer P-51Ds and P-51Ks, experienced low-speed handling problems that could result in an involuntary "snap-roll" under certain conditions of air speed, angle of attack, gross weight, and center of gravity.

Several crash reports tell of P-51Bs and P-51Cs crashing because horizontal stabilizers were torn off during maneuvering. As a result of these problems, a modification kit consisting of a dorsal fin was manufactured. One report stated:
"Unless a dorsal fin is installed on the P-51B, P-51C and P-51D airplanes, a snap roll may result when attempting a slow roll. The horizontal stabilizer will not withstand the effects of a snap roll. To prevent recurrence, the stabilizer should be reinforced in accordance with T.O. 01-60J-18 dated 8 April 1944 and a dorsal fin should be installed. Dorsal fin kits are being made available to overseas activities"

The dorsal fin kits became available in August 1944, and available as retrofits for P-51Bs and P-51Cs (but rarely used on the "razorback" -B and -C Mustangs), and to early P-51Ds and P-51Ks that had not already been built with them.

Also incorporated was a change to the rudder trim tabs, which would help prevent the pilot over-controlling the aircraft and creating heavy loads on the tail unit.

One of the few remaining complaints with the Merlin-powered aircraft was a poor rearward view. The canopy structure, which was the same as the Allison-engined Mustangs, was made up of flat, framed panels; the pilot gained access, or exited the cockpit by lowering the port side panel and raising the top panel to the right.

The canopy could not be opened in flight and tall pilots especially, were hampered by limited headroom.

In order to at least partially improve the view from the Mustang, the British had field-modified some Mustangs with clear, sliding canopies called Malcolm hoods (designed by Robert Malcolm), and whose design had also been adopted by the U.S. Navy's own F4U-1D version of the Corsair in April 1944.

The new structure was a frameless plexiglass moulding which ballooned outwards at the top and sides, increasing the headroom and allowing increased visibility to the sides and rear.

Because the new structure slid backward on runners, it could be slid open in flight. The aerial mast behind the canopy was replaced by a "whip" aerial which was mounted further aft and offset to the right.

Most British Mk IIIs were equipped with Malcolm hoods. Several American service groups "acquired" the necessary conversion kits and some American P-51B/P-51Cs appeared with the new canopy, although the majority continued to use the original framed canopies.

P-51Bs and P-51Cs started to arrive in England in August and October 1943. The P-51B/P-51C versions were sent to 15 fighter groups that were part of the 8th and 9th Air Forces in England and the 12th and 15th in Italy (the southern part of Italy was under Allied control by late 1943).

Other deployments included the China Burma India Theater (CBI). The first group to fly the P-51 on operations was the 354th Operations Group; their first long-distance escort mission was flown on January 15, 1944.

Allied strategists quickly exploited the long-range fighter as a bomber escort. It was largely due to the P-51 that daylight bombing raids deep into German territory became possible without prohibitive bomber losses in late 1943.
A number of the P-51B and P-51C aircraft were fitted for photo reconnaissance and designated F-6C.

Mushroom Model Publications (MMP) is based in the UK. All their books are printed by their associate Stratus in Sandomierz, Poland in the English language.

Stratus also does their own series of books in both Polish and English.

The cover art is a color photo of a P-51B in flight. It is overall bare-metal with a olive-drab anti-glare panel in front of the windshield. it has a narrow diagonal black fuselage band just in front of its all black rudder. It has the slogan "Lope's Hope" on the side of the nose.

The book contains 127 black and white photos, 28 line drawings, 84 maintenance manual drawings and photos, 14 information lists, 57 color photos (counting the cover art), 29 color profiles, a color illustration of the dashboard with names of all the instruments and a 1 page bibliography.

There are 6 photos of P-51's with shark-mouths on the nose.