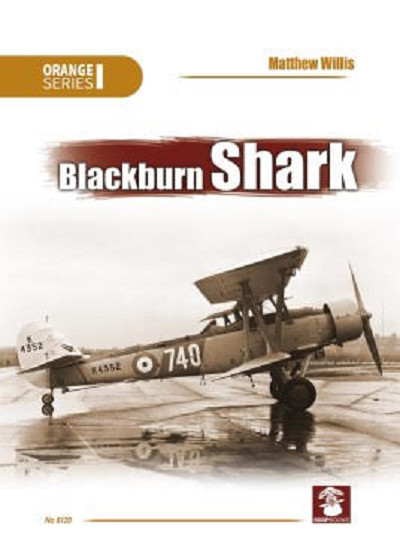 The Blackburn Shark torpedo/spotter/reconnaissance biplane was thoroughly overshadowed by its competitor, the Fairey Swordfish. In reality though, the Shark was more modern than the Swordfish and performed better, and had it not been bedeviled with engine trouble in its early service, might have gone on to great things.

As it was, the Shark contributed greatly to the Royal Navy’s preparation for war in the late 1930’s, and performed valuable service for the Fleet Air Arm and Royal Canadian Air Force during WW2.

Mushroom Model Publications (MMP) is based in the UK. All their books are printed by their associate Stratus, who is based in Sandomierz, Poland in English. Stratus does their own line of books also in both Polish and English.

It is the first book devoted to the Shark to cover all of its service with every operator, and features nearly 100 photographs including many never seen before, and detailed manufacturer images from the BAE Systems Heritage archive.

Written by naval aviation historian Matthew Willis, featuring 16 line-drawing scale plans in 1/72nd scale and 31 color profiles by Chris Sandham-Bailey, this title offers the most comprehensive historical and technical study of the Shark yet published.

This is one neat book. Highly recommended. It will be of great interest to modelers and aviation historians alike.

I want to thank Casemate Publishers for this review sample and also Roger  Wallsgrove, Editor in Chief of MMP.

Casemate is the North American distributor of MMP books and all MMP titles can be viewed on Casemate’s website at:
www.casematepublishers.com