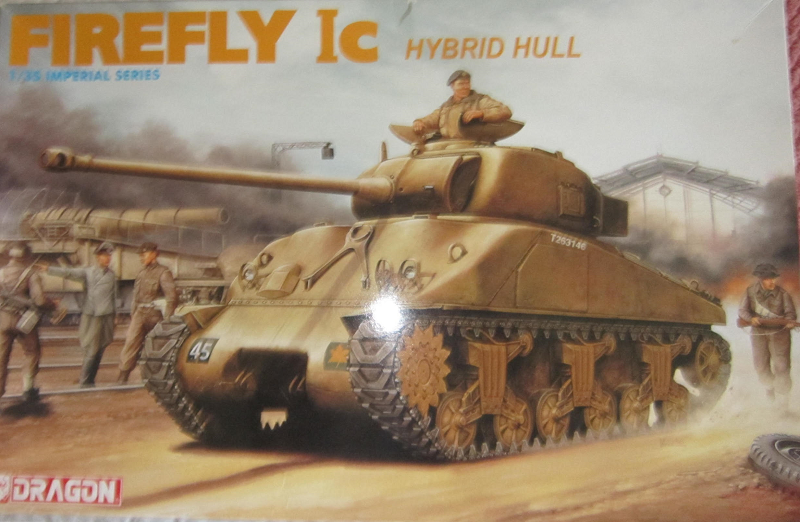 The Sherman Firefly was a tank used by the United Kingdom and some Commonwealth and Allied armored formations in the Second World War. It was based on the US M4 Sherman, but fitted with the powerful 3-inch (76.2 mm) caliber British 17-pounder anti-tank gun as its main weapon.

Originally conceived as a stopgap until future British tank designs came into service, the Sherman Firefly became the most common vehicle mounting the 17-pounder in the war.

Though the British expected to have their own new tank models developed soon, the previously rejected idea of mounting the 17-pounder in the existing Sherman was accepted.

After the difficult problem of getting such a large gun to fit in the Sherman's turret was solved, the Firefly was put into production in early 1944, in time to equip Field Marshal Montgomery's 21st Army Group for the Normandy landings.

It soon became highly valued as its gun could almost always penetrate the armor of the Panther and Tiger tanks it faced in Normandy. In recognition of this, German tank and anti-tank gun crews were instructed to attack Fireflies first.

Because the Firefly had a visibly longer barrel, crews tried to camouflage it so the tank would look like a normal 75 mm-gun Sherman from a distance. Between 2,100 and 2,200 were manufactured before production wound down in 1945.

The box art shows a British Firefly in a rail-yard. There is a German rail gun on the tracks behind it and 2 British soldiers are interrogating a German officer. Another British infantryman is marching behind the Firefly.

The tank commander is looking out of the turret upper hatch.

One side panel has a color photo of the model made up as a U.S. Sherman M4 PoA-CWS-H1 flamthrower, followed by CAUTION "When you use glue or paint, do not use near open flame and use in well ventilated room". In 6 languages including English.
​Kit not suitable for children under 3 due to sharp parts. Kit is intended for modelers age 10 and over. Copyright date is 1996 and DML's street address in Hong Kong, China is provided and the kit was made there.

The other side panel has three photos of the model built as a British Firefly Ic Hybrid Hull.

The main instructions consists of a single-sheet that accordion-folds out into 8 pages in 17" x 8 1/2" page format.

Page 1 of the main instruction sheet begins with a black and white repeat of the box art over the parts trees illustrations.

Many parts are blued-out. Meaning they are excess and not needed to complete the kit.

Page 2 begins with CAUTION about the kit, over international assembly symbol explanations, a suggested paint color listing in 6 languages, including English, over the first 2 assembly steps.

Page 3 through 7 gives a grand total of 19 assembly steps.

page 8 is the marking and painting instructions with four 4-views:

1. The Fireflay in the box art scheme (already described above).

2. A Firefly in overall olive-drag with a black square with a white 51 on it on the left side of the nose and right side of the rear. It is Governor General's Foot Guard (21st Armoured Regiment) 4th Canadian Armored Div., Canadian Army.

It is with the 3rd County of London Yeomanry, 4th Armored Brigade, British Army.

4. A Firefly that is overall olive-drab with a yellow circle with a horse's head on it on the turret sides, a white serial no. T209854 followed by the yellow word "Zemstah 11" on the sides of the hull.

It is with the 1st Krechowiecki Lancers, 2nd Armoured Division, Polish Army, Italy 1944-45.

Below these is the decal application instructions in 6 languages, the copyright date and printed in Hong Kong. 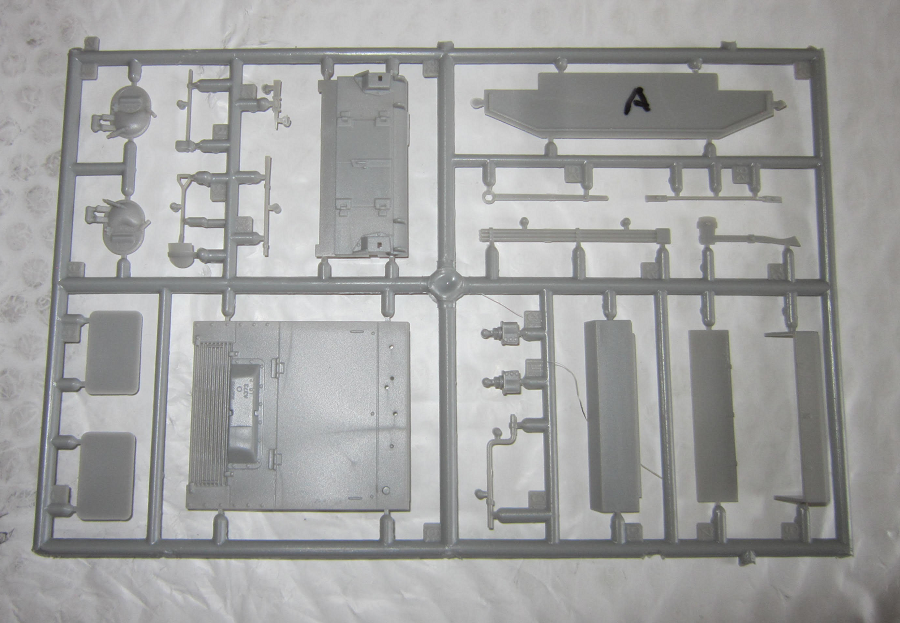 There is a second medium-gray tree marked as letter A. It is not illustrated at all in the parts trees illustrations. It holds: final transfer cover base plates, a hatches, a 50 cal machine gun, headlight guards, headlights, turret top etc. (39 excess parts). Why this is in the kit confuses me since it is from their Pershing series tanks? 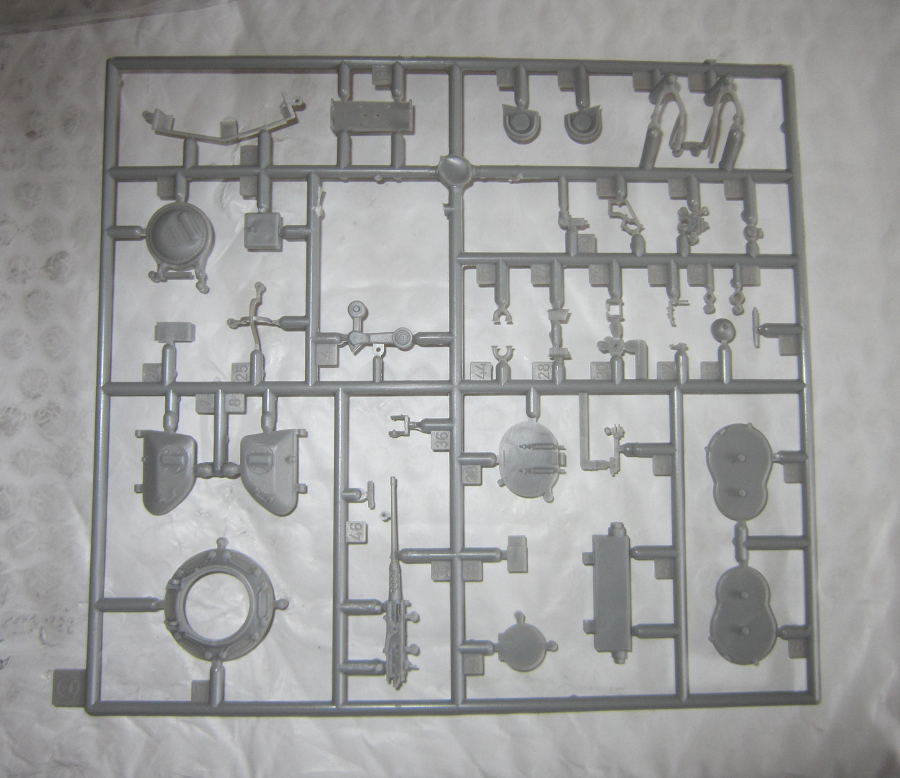 There are 2 ​medium-gray B trees The first  holds: turret parts for the flame thrower version, main gun, mantle etc. (28 parts) 5 parts are excess. 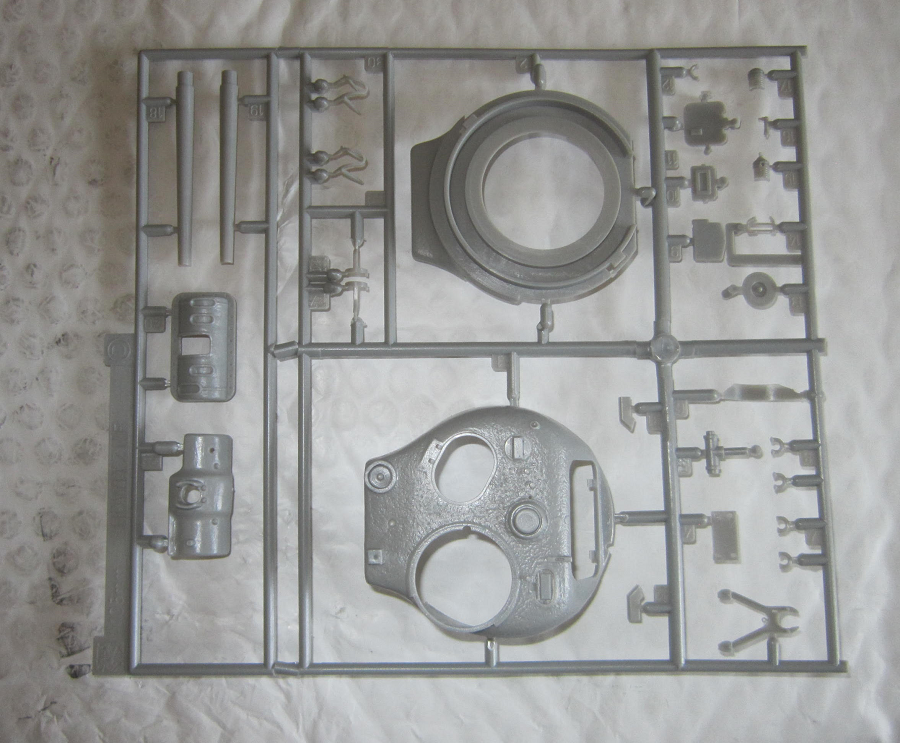 The second medium-gray tree holds the turret parts for the Firefly version (28 parts). 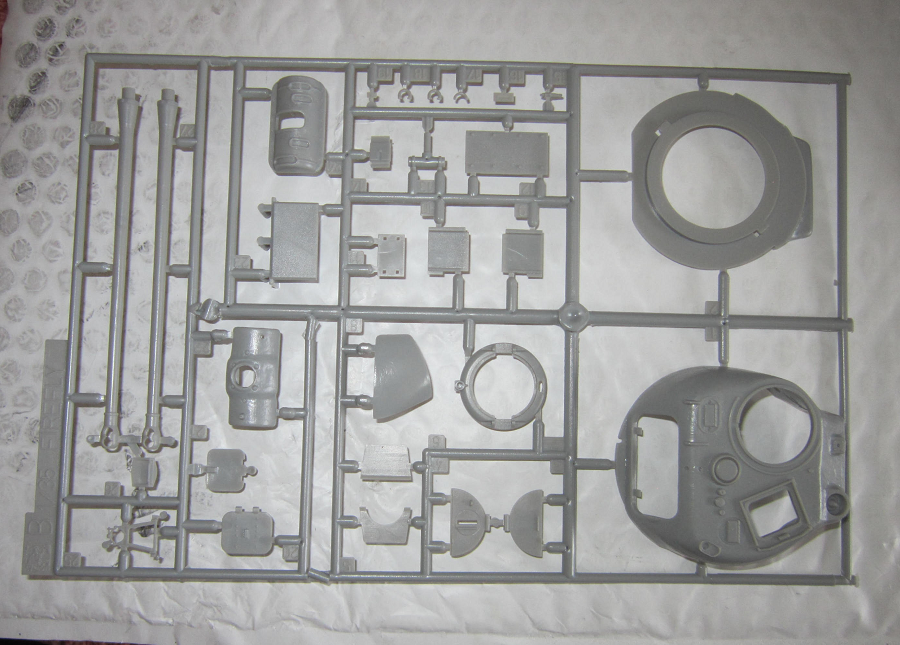 ​There are two trees labeled as letter C. 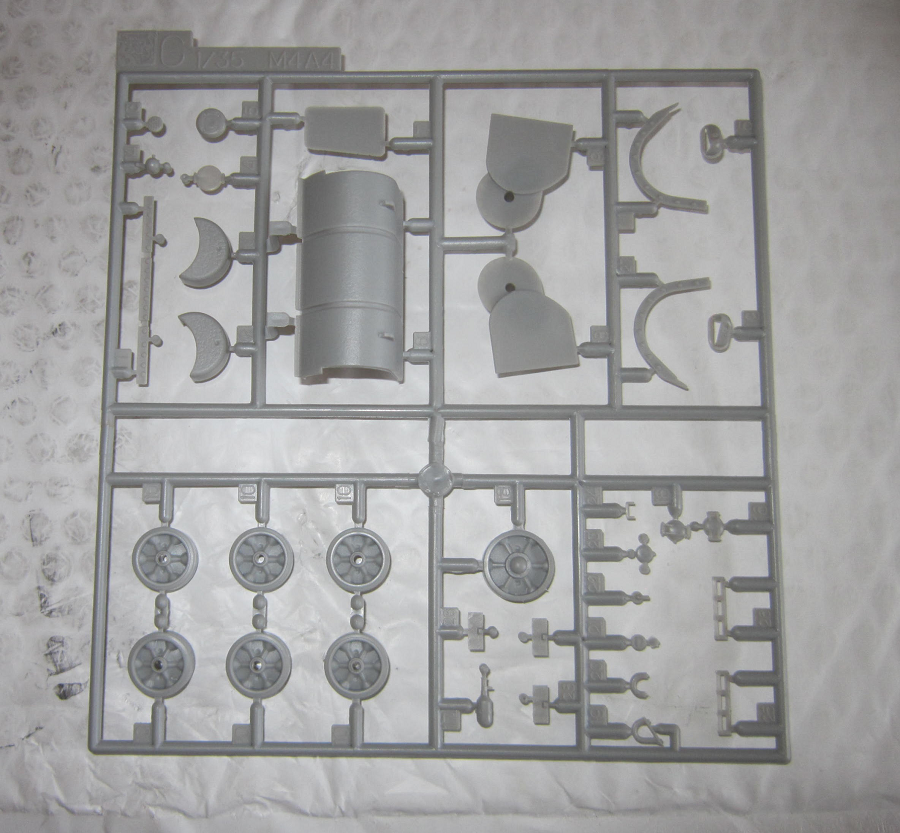 ​There are 2 identical medium-gray letter D trees. They hold: bogies, road wheels, drive sprockets etc. (43 parts per tree) 3 parts are excess. One of the 2 copies includes the hull tub part. 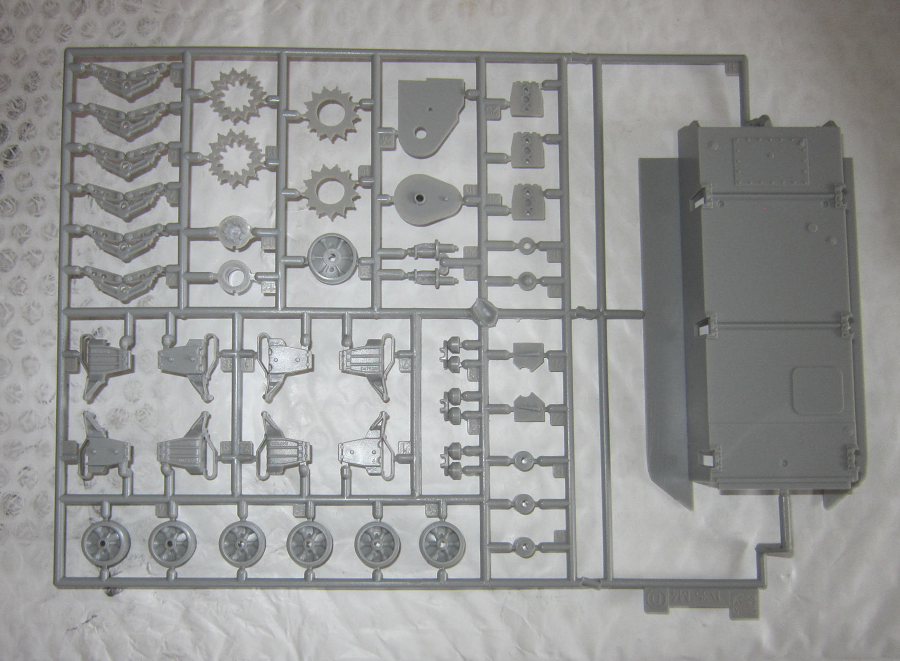 There is another medium gray tree labeled as letter D. It is not shown anywhere in the parts trees illustrations. Again, I have no clue why this tree is in the kit? It is obviously excess and not needed.
​Medium-gray letter E tree is the hull tub part.
​There are 3 identical medium-gray letter F trees. The hold individual track links (128 parts per tree) 60 parts per tree are excess. 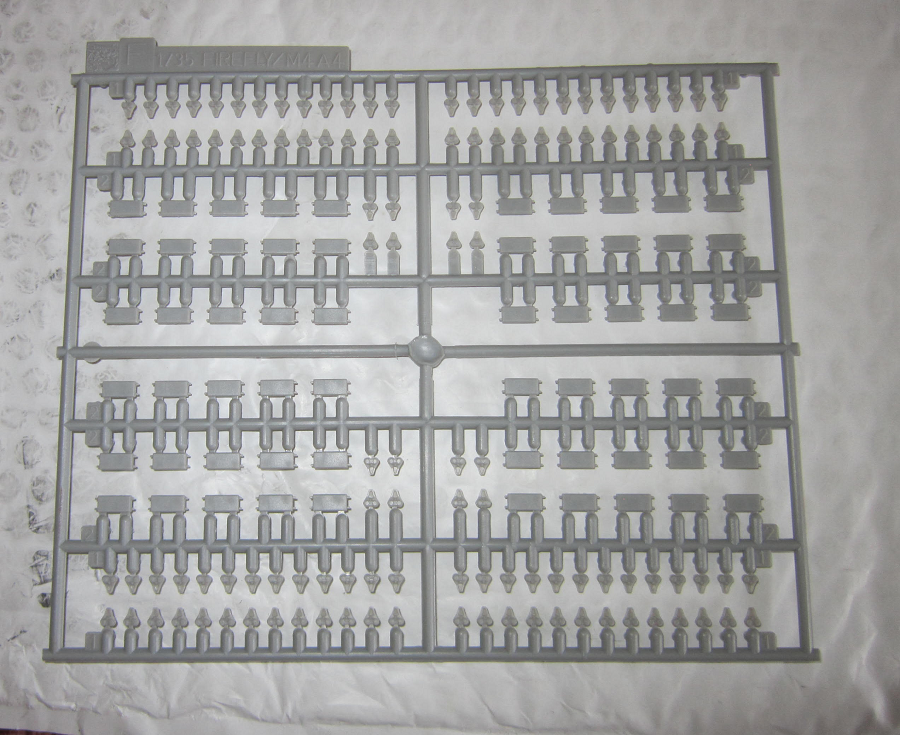 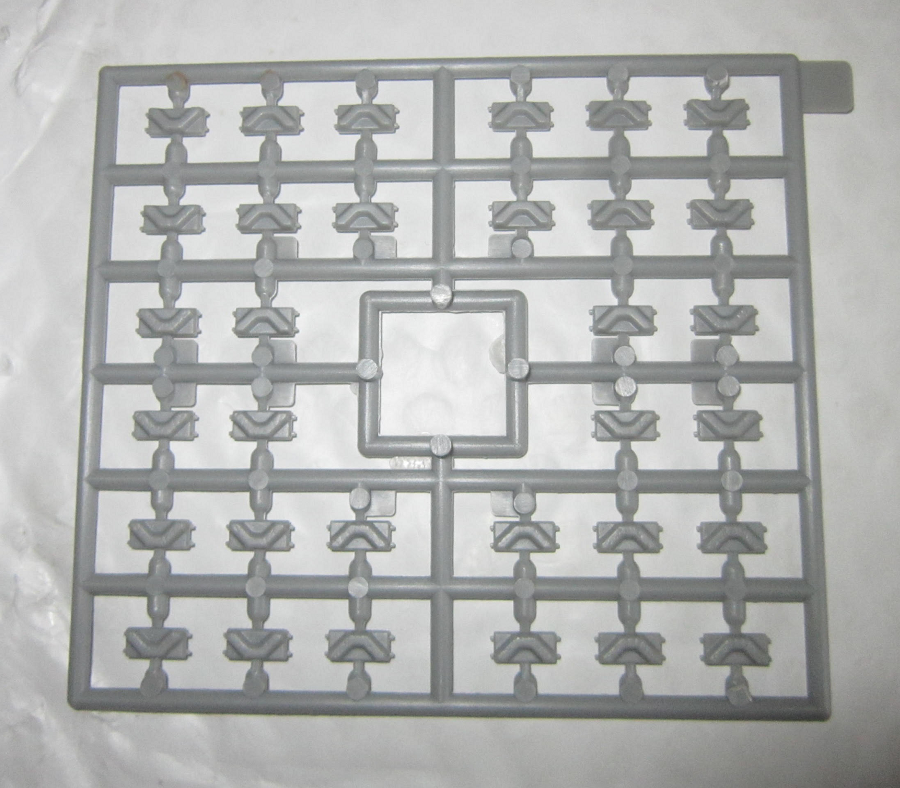 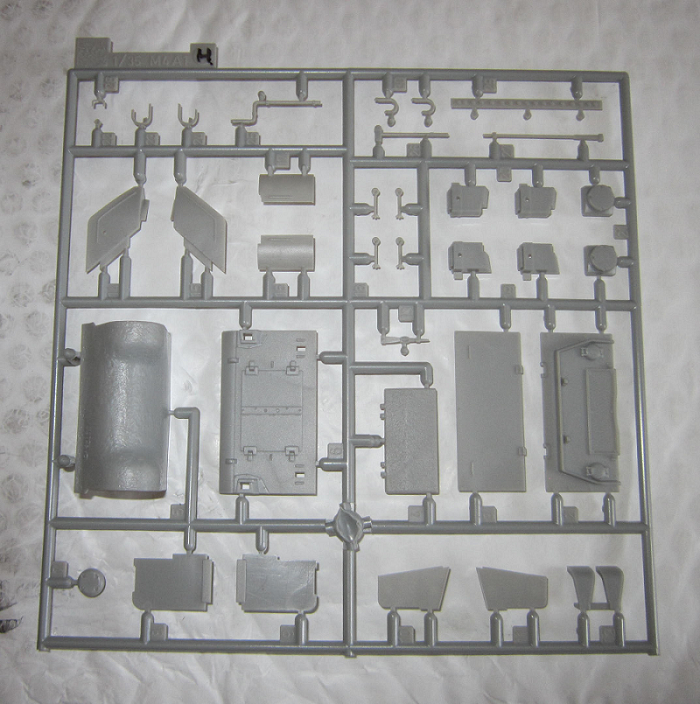 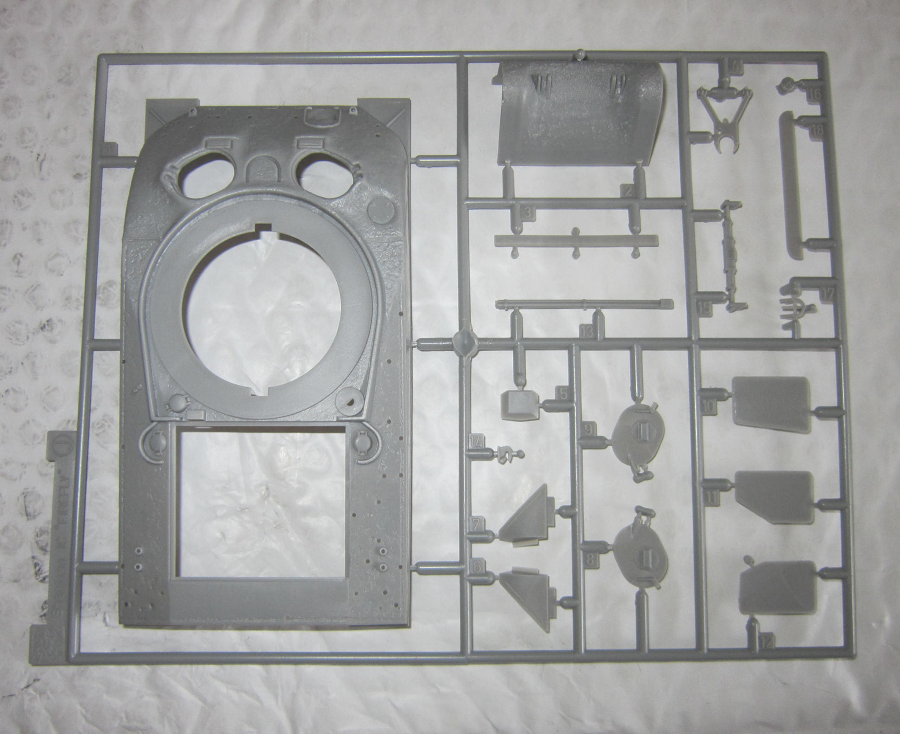 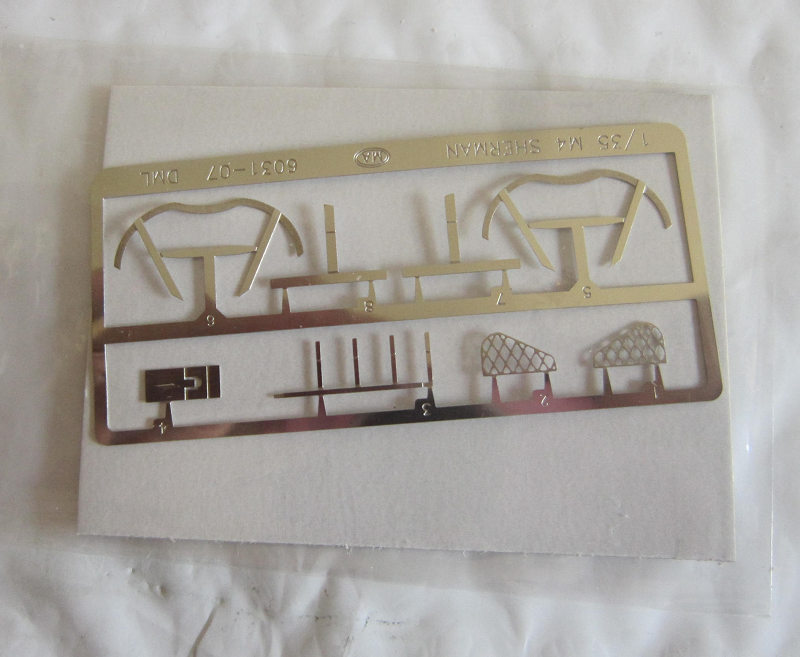 ​No clear parts or figures are included in the kit. There is no interior detail. Nice exterior detail though. 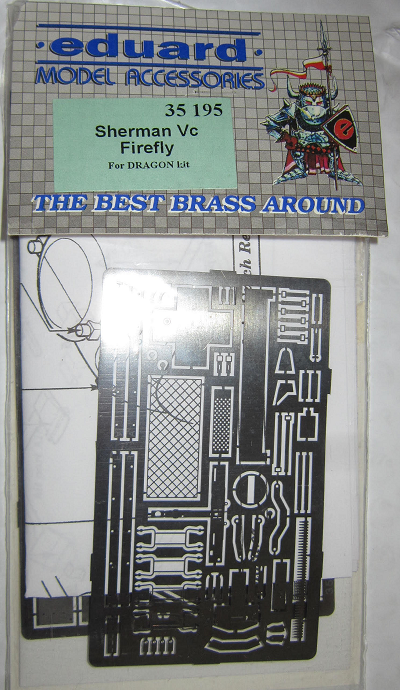