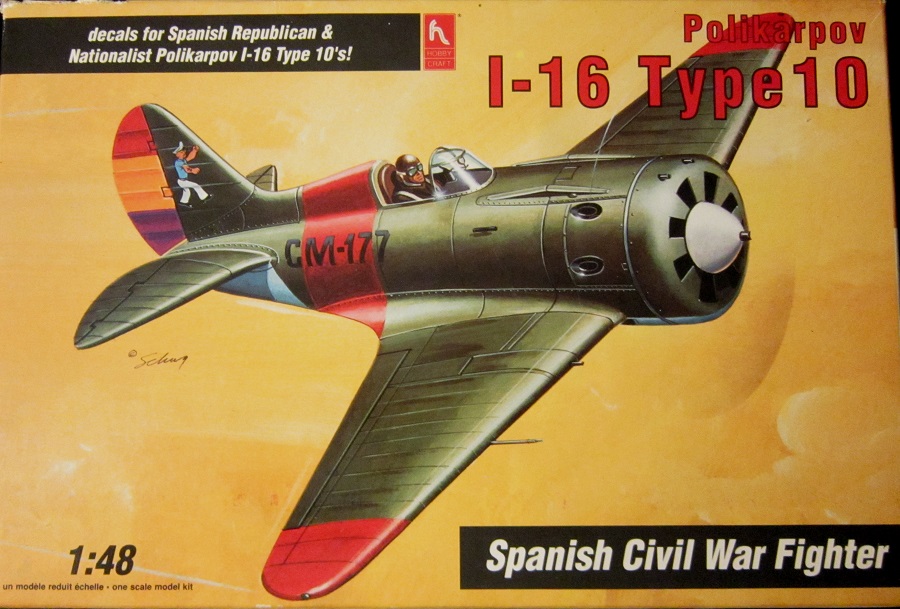 Out of production, but still can be found places on the internet.

The Polikarpov I-16 was a Soviet fighter aircraft of revolutionary design. It was the world’s first all-metal cantilever-winged monoplane fighter with retractable landing gear. The I-16 was introduced in the mid-1930’s and formed the backbone of the Soviet Air Force at the beginning of WWII. The diminutive fighter prominently featured in the Second Sino-Japanese War, the Spanish Civil War, where it was called the “Rata” or “Mosca”, and the Battle of Khalkhin Gol.

The type 10 variant (subject of this kit) had 4 x ShKAS machine guns, a more traditional windscreen ( replaced the troublesome opening canopy) and a reflector gun sight was added. It had greater surface of the wing, which was covered with duraluminum. The engine was the M-25V of 760 hp. During the Spanish Civil War the aircraft was nicknamed the “Super Mosca: or simply “Super”. 250 of this type were supplied to China.

HobbyCraft of Canada was a model company based in Toronto, Canada. I am not sure they still exist or not.

The kit came in a shrink wrapped tray and lid type box.

The box art shows the I-16 type 10 flying along in a quite yellow sky. It is painted in dark green above and pale blue underneath. The propeller spinner is all white. The tips of the wings are red. The rudder has red, yellow and blue horizontal stripes on it and the tail has a image of  Popeye the Sailor on it. The aircraft also carries the black fuselage code of CM-177 over a vertical red fuselage band just behind the cockpit. This is the markings of a Spanish Republican Air Force aircraft, during the Spanish Civil War in 1938. This is one of the two markings offered on the decal sheet in the kit.

Both  side panels of the box give a list of the kit’s features: detailed cockpit and landing gear, engraved panel lines and authentic markings. This is multiple languages including English. Hobbycraft’s steet address in Canada is supplied and the kit was made in South Korea.

Inside the box is a sealed cello bag that holds 3 trees of medium grey parts and 2 clear cockpit canopies. The decal sheet, instructions, a form to order HobbyCraft’s catalog for 3 bucks and a pre-paid post card to use to send HobbyCraft suggestions for new kits and any comments you may have. There is a slip that warns that the kit is not suitable for children under 3 years old because of small parts, in English, French, German, Italian, Dutch, Portuguese, Spanish, Danish and Greek.

The instructions consist of a single sheet that accordion folds out into 6 pages of  10 ¾” x 8 ½” format.

The first page begins with black and white repeat of the box art. This is followed by the history of the I-16 Type 10 as just one long sentence. (in 6 languages including English) The bottom of the page has international assembly symbol explanations and HobbyCraft’s address in Canada again.

Pages two through four give a total of 3 assembly steps. In the 3rd step you opt for a closed canopy or just a windscreen. However, far as I can determine, the Type 10 only used the windscreen.

Page five has side views for 2 schemes (both sides illustrated for each). One is for the box art subject (already described above) and the second one is for a Spanish.Nationalist Air Force aircraft in Spain in 1946. This would have been well after the Spanish Civil War so the title of the kit on the box doesn't apply to this scheme. Colors are called out for both schemes in F.S. numbers ONLY (Federal Standard). This means that, if you don’t have a conversion list – telling you WHAT these colors are – you are pretty much screwed! I have a F.S.  book and from what I can determine the second scheme is a base of sand yellow with dark green and dark brown spots over it and light blue underneath. It has a white tail with a black X spanning it. There are red and yellow roundels above and below the wings. There is a black fuselage number of 1W, then a black circle with an ox yoke and bundle of arrows on it in red and the number 6 (in black too). The propeller spinner is camouflaged the same as the top of the aircraft.

Page six has illustrations showing the top and bottom of these two schemes. HobbyCraft should have called out the names of the colors to use, not JUST the FS numbers. Not everybody has a conversion table for the FS number to colors. Bad move HobbyCraft!

There are no parts tree illustrations in the instructions. Parts are alphabetized and  numbered on the trees and in the assembly drawings okay though. There is also no pilot figure supplied. 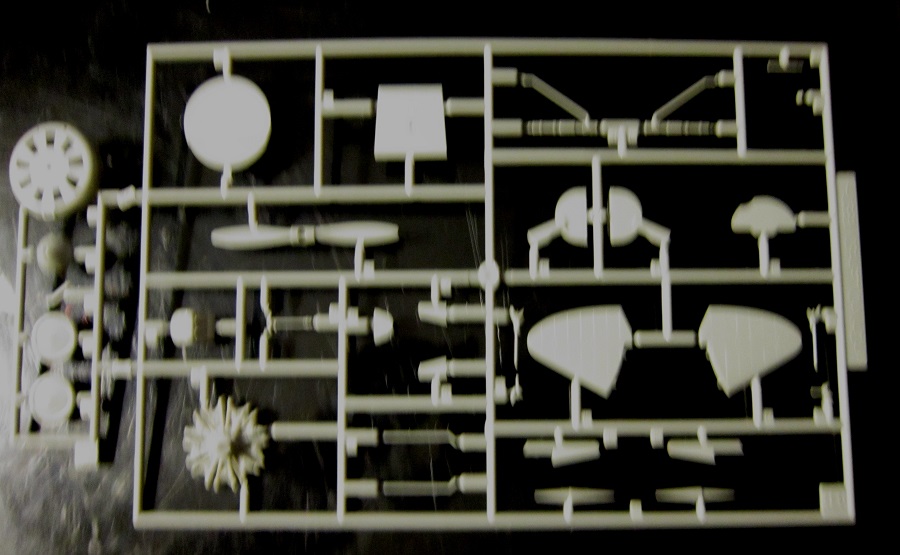 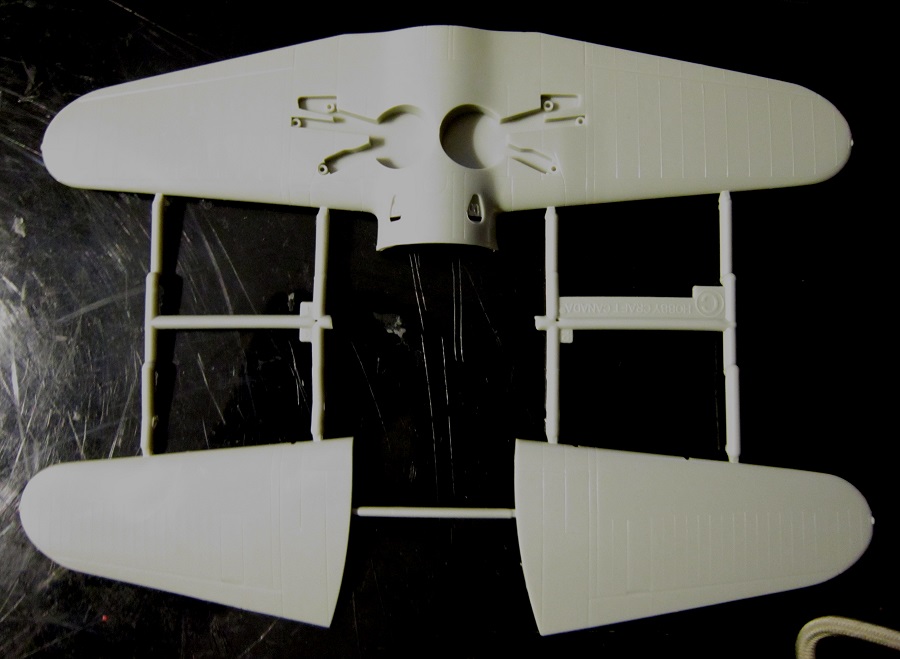 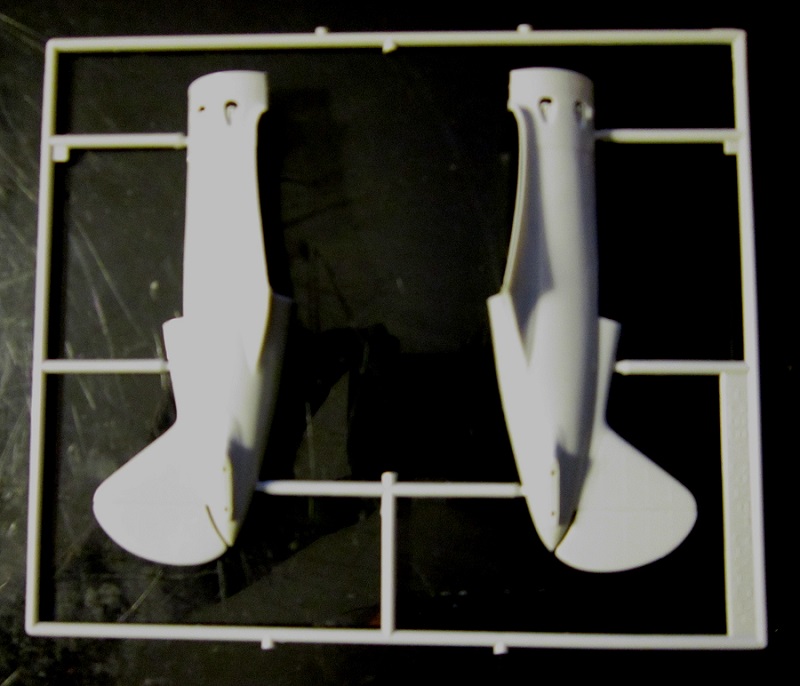 The last parts in the kit are the single clear windscreen and the single clear closed canopy part. As already mentioned, I am pretty sure that the closed type was dropped before the Type 10 came along. 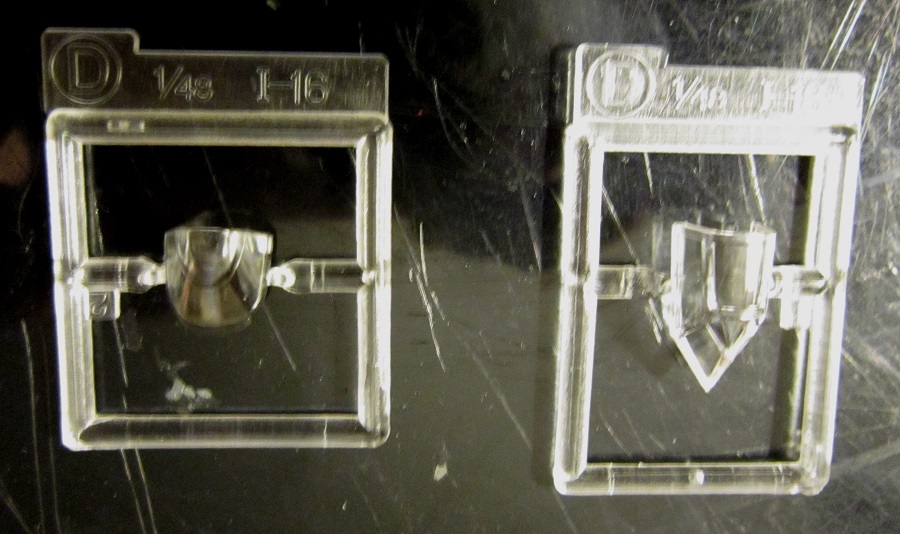 The decal sheet (markings already described above) also includes a second Popeye figure facing the other direction. It is not certain whether he faced the same direction on each side of the rudder, so it’s up to you which way you want him on the starboard side – which was never photographed. 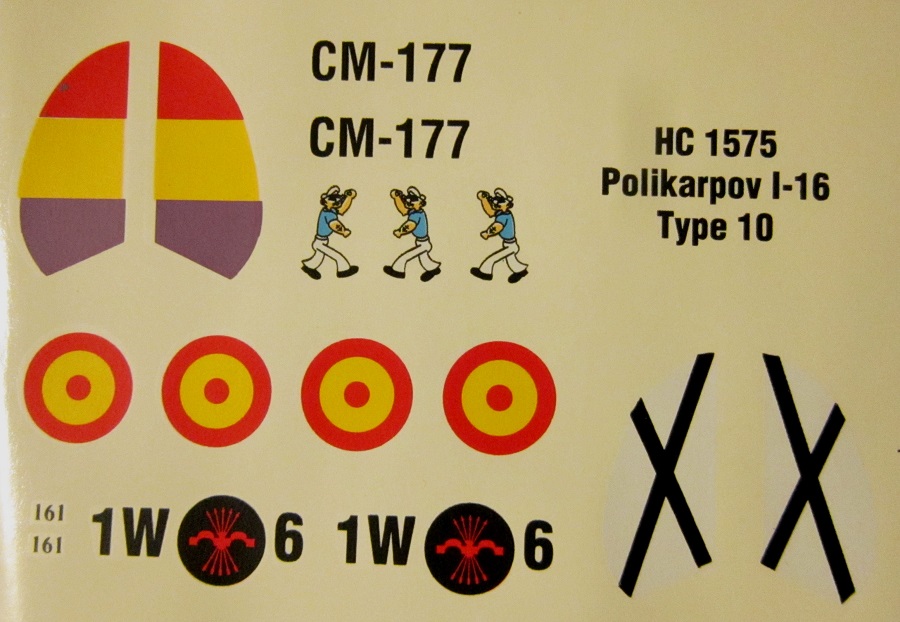 The joystick in the kit, part no. B5, is totally wrong. It has handles at the top that look like the handlebars on a bicycle. The I-16 had an oval handle at the top. This is shown on page 40 in Squadron’s in Action book on the I-16 (shown here) 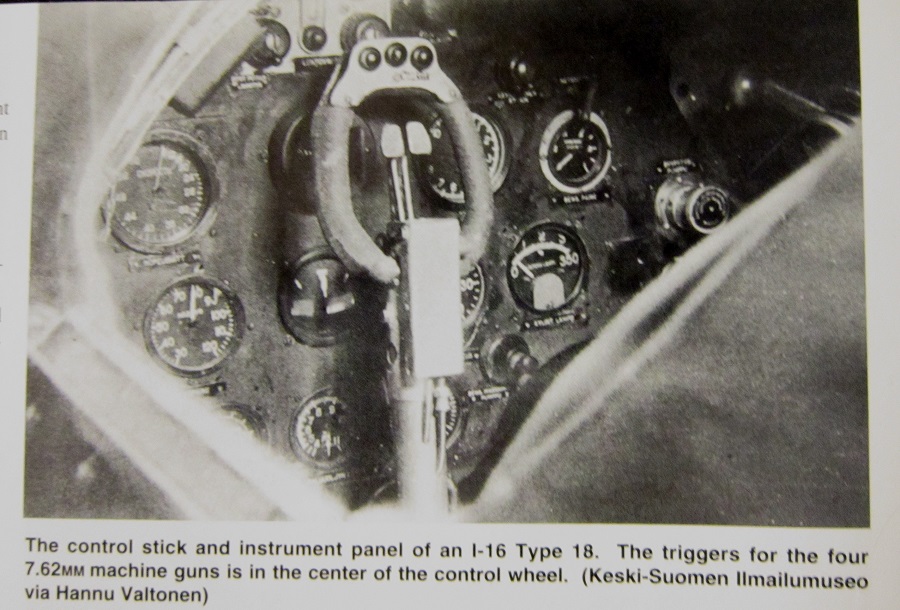 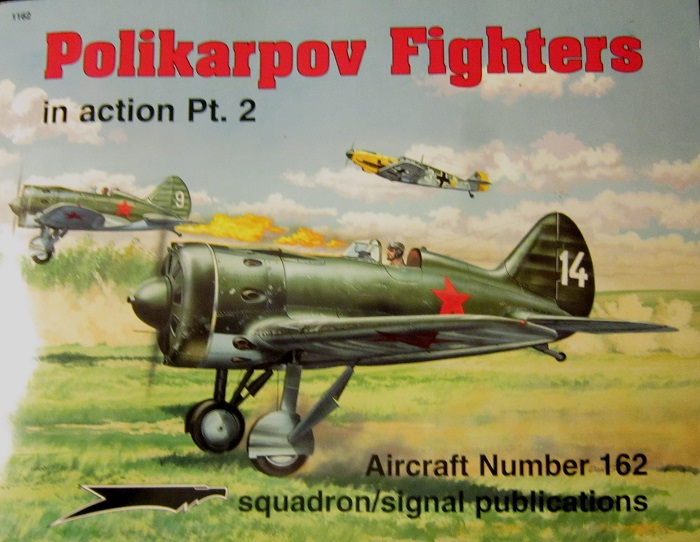 and also on a line-drawing blueprint that I got of the I-16 from a Russian pen pal years ago. The blueprint is in Russian – and – gee folks the Russians should know what the joystick looked like, you would think – right?

The second thing in the kit is the missing Huck starter in the center of the propeller spinner. This can be fabricated from sprue or, if you are lucky enough to find tubing that small in diameter, some tubing. The cowl guns on the Type 10 at the top of the cowling protruded. There are just holes molded in the cowling in the kit, but no guns. Sprue or tubes to the rescue again. The cockpit interior is very sparse, giving only a floor, seat, bad joystick and the dashboard, but no foot pedals or any other detail. The kit is engraved detail and rather nice beginning for an I-16. However, those of us  with AMS will want to dolly out the cockpit more and add that Huck starter and cowl guns and alter the joystick into its correct shape.

Recommended to modelers of WWII Soviet aviation. I think it is definitely a weekend build.