The submarine model IX of 750 tons and the model IIV of 550 tons were the main forces of the famous U-boats of the German Navy which performed an active role in the 2nd World War. They were designed especially as the war-time mass production models and were drastically placed under mass production when the war started. The building of these submarines took only about 11 weeks from the keel laying till completion,. Including 7 months for hull construction, 3 months for outfitting and 1 month for official trial.  At a later time, construction time was much shortened.

On completion, the U-boats were assigned to the front and engaged in destruction tactics of enemy transport ships. According to these tactics, the German Navy spread surveillance net work over the Atlantic Ocean to locate enemy transport fleets during the daytime and waylaid them at the very limit of the enemy’s visibility until sunset and launch night attacks. In consecutive 2 nights, under the full moon in October of 1940, the U-boat fleet sank 31 ships off the Western Approaches. When the night attack became difficult due to the development of radar later they developed the tactic called Wolf Packs. A number of U-boats were organized into groups and assaulted on the transport ships on consecutive nights and days. This tactic achieved great results.

WWII was a war of science. The Allied nations made an all-out effort to develop new weapons to counter the rampages of the U-boats. Gradually, their scope of activities was restricted at last. Geremany was defeated. However, the brilliant records of the U-boats remain long in the history of ship building technology and of tactics the German Navy took.

The schnorkel and the submarine type XXI that navigated at a very high speed under water had big effects later on the nuclear submarines of today.

Nichimo is a prolific model company based in Japan. They make all manner of model subjects in the popular scales.

This kit comes in a long shrink-wrapped tray and lid type box.

The box art shows a type IXB U-boat surfaced and watching a freighter burn and sink. It has 4 aces on the side of the conning tower. The markings for U-107. It is grey above a red hull bottom edged with a black stripe.

One side panel has a color profile of the submarine with numbered arrows pointing to various parts of it’s anatomy and a list to the side of what those parts are in Japanese and English.

The other side panel has a history of the IXB in English, MADE IN JAPAN and a small color repeat of the box art. 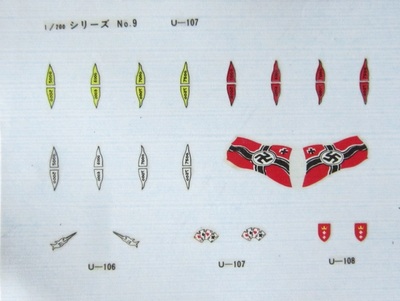 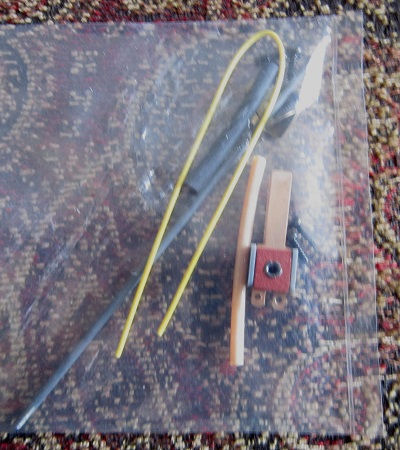 Nichimo markets this kit with a motor in it, but my kit is not the motorized one. Strange that they wasted this hardware in my kit!

I will not try and list what each part is on these two trees. I would only miss name stuff for sure, not being an avid ship modeler per se. I ask readers just to look at the parts photos.

This kit will make up nicely. I had a Japanese net friend translate the all Japanese instructions for me. It is odd that Nichimo only did English on the history on the side panel and Japanese entirely otherwise.

I bought my kit many years ago. I do not know if it is still in production. Somebody perhaps may have one on E-bay to peddle? Recommended to modelers of average building skills.