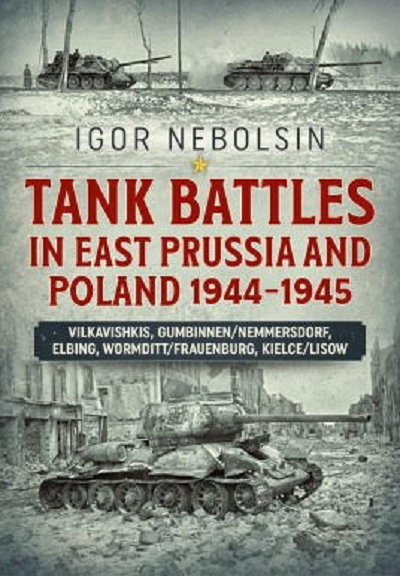 This book is hardcover with a paper jacket.

This new study by Igor Nebolsin covers, in remarkable detail, a number of forgotten and overlooked armored engagements on the Eastern Front during the final years of the war, based firmly on Soviet and German archival records.

After defeating German Group Army Center in Belorussia (Operation Bagration) in the first days of August 1944, the Red Army rapidly approached East Prussia.
Here, near the borders of the Third Reich in the area of Vilkaviskis, heavy tank combats broke out. German Panzer-Grenadier Division Grossdeutschland engaged the Soviet 33rd Army, reinforced by the 2nd Guards Tank Corps and separate anti-tank artillery Brigades and Regiments, in fierce and extensive combat.

Based on the archival documents from both sides and other sources, Igor Nebolsin provides a meticulous analysis of this battle and challenges myths created by some German authors.

By mid-October 1944, the Soviet 3rd Belorussian Front was ready to invade East Prussia. 2nd Guards Tank Corps committed to the main axis of attack developed an operational breakthrough in the direction of Gumbinnen and sood captured an important crossing over the Angerapp River at Nemmersdorf.

For two days Soviet units were engaged in severe fighting against Fallschirm-Panzer-Division "Hermann Goering", 5th Panzer Division and the Fuhrer-Begleit-Brigade. Combat in East Prussia was notable, even by Eastern Front standards, for their severity, mercilessness and heavy losses in personnel and material for both sides.

In January 1945, the Red Army managed to break the strong German defense in East Prussia and swiftly reached the Baltic, cutting off East Prussia from Germany.

5th Guards Tank Army played a decisive role in this breakthrough. At the final stage of this operation the Army contained a desperate attempt of the German 4th Army to escape from East Prussia to Germany in tank engagements at Wormditt and Frauenburg.

The day-by-day coverage of events, honest views of the Soviet and German commanders, statistical data from both Russian and German viewpoints, and the "human element", based on the exciting firsthand reminiscences of Soviet tank officers, all make this study an incredibly valuable source of information.

The text is fully supported by 24 full color specially commissioned maps printed on slick-coated paper and an extensive selection of no less than 367 black and white wartime photographs, many from private collections.

These photos show the command staff of the Germans and the Soviets, both their infantrymen in the fields, battle damage, tanks for both sides and artillery. Very thorough.

There are 101 data lists of information about the tanks used by both sides, 4 recognition tactical emblems of the 2nd Soviet Guards Tank Corps are illustrated.

The end of the book has a bibliography and index.

Igor Nebolsin is the author of six documentary monographs and other publications on military history. He was born in the Soviet Union in 1976.

He graduated with honors from the Academy of the National Economy under the Government of the Russian Federation in Moscow in 1998 and earned a Masters degree at the University of Warwick (UK), where he successfully completed his dissertation in 2010.

The history of the Second World War has been his passion from an early age. His grandfather and father were both Soviet tank forces officers.

Igor Nebolsin's research focuses on Eastern Front armored battles of 1943-1945. His monographs on the combat history of the Soviet Guards Tank armies are strictly based on the analysis of archival documents from both the Russian and German viewpoints, and materials provided by the Russian Second World War Veteran's Councils, including the United Council of the Soviet Tank and Mechanized force, and Guards Tank Armies' museums.

Igor is an active participant of international military forums. He is married and has two sons.

I want to sincerely thank Casemate Publishers, who sent me this book sample and the folks at Helion.

Casemate is the N. American distributor of Helion books and all their titles can be seen on Casemates website at:
www.casematepublishers.com