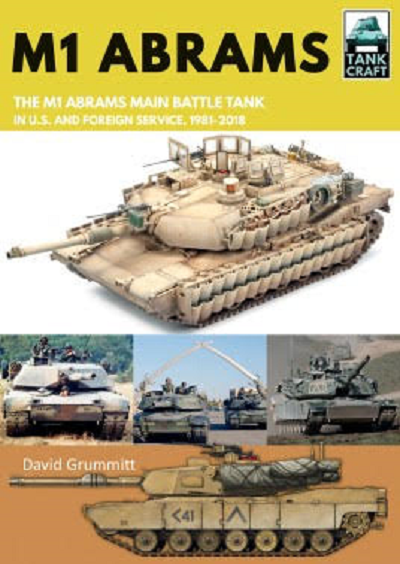 Since its introduction in 1981, at the height of the Cold War, the Abrams main battle tank has been one of the most visible and iconic symbol of American military power.

Designed to meet head-on the massed tank forces of the Warsaw Pact, its combat debut in fact came in a different scenario in 1991 during the First Gulf War. Since then it has served in the peace-keeping role in the former Yugoslavia and seen combat in Iraq, Afghanistan and Yemen

It has gone through a series of modifications and modernizations that see it set to remain the backbone of the U.S. Army until at least 2050.

Pen & Sword Military is based in the UK.

The cover art has a color photo of a 1/35 scale Ryefield brand M1 Abrams model built by Vorya Heidaryan over 3 color photos of Abrams and a color side profile of one.

The book contains 7 black and white photos and 47 color ones.

Key features of the book are:

Design and operational history of the U.S. Abrams main battle tank from its Cold War origin, through its service in the Middle East, to its contemporary role in NATO.

Details its service in the Australian, Egyptian, Iraqi, Kuwaiti and Saudi armies.

Reviews the full range of kits and accessories available to model the Abrams in all the major scales and includes a gallery of photographs of outstanding models.

Details of variants and modifications made in production and in the field.

Sources of further information from books and websites.

The author of this book’s Flyhawk model is shown built up and so is the 1/72nd scale DML Dragon Abrams, along with a copy of a page out of the Tiger Model’s instructions.

Box arts for the 1/48th scale Abrams Tetro, Trumpeter and Tamiya kits are shown and Tamiya’s 1/16th scale M1A2 is shown in 2 built up photos.

The Panda Model’s Abrams is shown built up with illustrations of the Eduard PE set for the Abrams.

This is one neat book. Highly recommended to modelers and military historians alike.

I want to sincerely thank Casemate Publishers, the North American distributor of Pen & Sword books for this review sample and the folks at Pen & Sword too.

All Pen & Sword titles can be seen listed on Casemate’s website at:
​www.casematepublishers.com