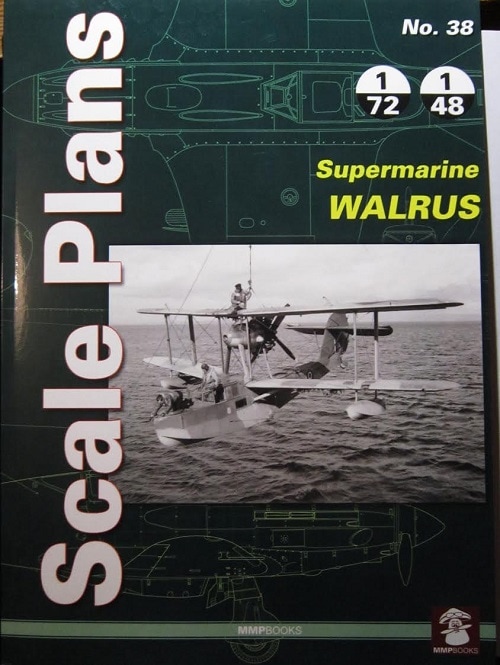 Designed for use as a fleet spotter to be catapult launched from cruisers or battleships, the Walrus was later employed in a variety of other roles, most notably as a rescue aircraft for downed aircrew. It continued in service throughout the Second World War.

Mushroom Model Publications (MMP) is based in the U.K. All their books and Scale Plans are printed by their associate Stratus in Sandomierz, Poland in English. Stratus also does their own line of books in both English and Polish.

This Scale Plans set is a soft cover portfolio containing 4 large sheets (11 3/4" x 16 1/2") folded once in the center of the 16 1/2" width. These sheets are printed on both sides with black and  white line drawings. The sheets can easily be removed to be used away from the portfolio cover.

The cover shows a black and white photo of a Walrus and it's crew of 3 being hoisted aboard a ship by a crane. The photo is against an all dark green cover that has a yellow line drawing on it of what appears to be a Spitfire.

These plans are done by Przemyslaw Frask and Mariusz Kubryn.

The first sheet is to 1/72nd scale. It shows a Walrus Mk. 1's left and right profile, a shot from above showing the wings folded, a profile of a Walrus with a wood tail, a illustration of the cockpit open and illustrations of the formers inside the hull.

The reverse side of the first sheet has a 4-view in 1/72nd scale, showing a Walrus Mk. 1 front, rear, bottom and top views.

The second sheet has a left and right profile drawing to 1/48th scale of a Walrus Mk. 1 (early version).

The third sheet has a 1/48th scale above illustration of a Walrus Mk. 1.

The reverse side of the third sheet has a 1/48th scale illustration of the bottom of a Walrus Mk. 1, showing stores racks in wing spaces on starboard wing only.

The fourth sheet has an illustration of a Walrus Mk. 1 in 1/48th scale showing it with its wings stowed. Starboard upper-wing and part center section removed for clarity.

The reverse side of the fourth sheet has a 1/48th scale illustration of a Walrus Mk. 1 head on and tail on.

MMP has a companion book on the Walrus too. Its author is the Editor-in-Chief of MMP, Roger Wallsgrove.

Both Airfix and Revel make kits of the Walrus.

The only thing missing from this set of plans is a history of the plane. I got the history off of Wikipedia.

I want to thank Roger Wallsgrove, Edito-in Chief of MMP and the folks at Casemate who sent me this review copy.

Complet MMP book listings can be found on the Casemate site at: