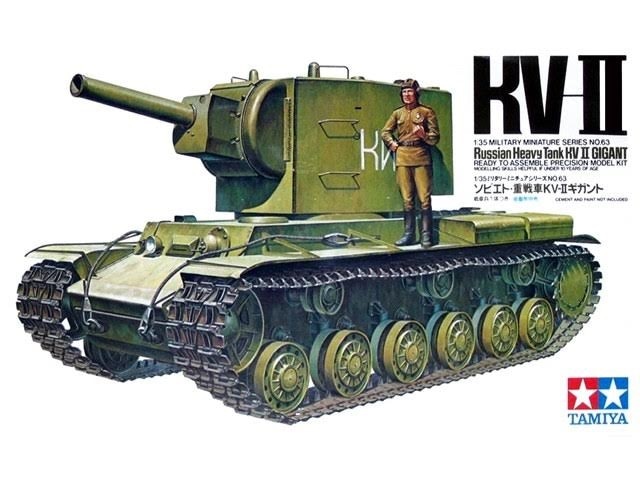 The Kliment Voroshilov (KV) tanks were a series of Soviet heavy tanks named after the Soviet defense commissar and politician Kliment Voroshilov and used by the Red Army during World War II. The KV series were known for their heavy armour protection during the early part of the war, especially during the first year of the German invasion of the Soviet Union. In certain situations, even a single KV-1 or KV-2 supported by infantry was capable of halting the enemy's onslaught. German tanks at that time were rarely used in KV encounters as their armament was too poor to deal with the "Russischer Koloss" - "Russian Colossus".

The KV tanks were practically immune to the 3.7 cm KwK 36 and howitzer-like, short barreled 7.5 cm KwK 37 guns mounted, respectively, on the early Panzer III and Panzer IV tanks fielded by the invading German forces. Until more effective guns were developed by the Germans, the KV-1 was invulnerable to almost any German weapon except the 8.8 cm Flak gun. Even then, in a speech to the Panzerkommission on 18 November 1941, Guderian stated that "the sloped armor causes hits from the 8.8 cm Flak gun to ricochet" referring to the KV-1.

Prior to Operatopm Barbarossa (the German invasion of the USSR), about 500 of the over 22,000 tanks then in Soviet service were of the KV-1 type. When the KV-1 appeared, it outclassed the French Char B1, the only other heavy tank in operational service in the world at that time. Yet, in the end, it turned out that there was little sense in producing the expensive KV tanks, as the  T-34 medium tank performed better (or at least equally well) in all practical respects. In fact the only advantage it had over the T-34-76 was its larger and roomier three-man turret.Later in the war, the KV series became a base for the development of the JS (Iosif Stalin) series of tanks.
SPECIFICATION:

The box art shows a KV-II posed against one of Tamiya's SIGNATURE all white backgrounds, which is the usual way they do their box arts.

The KV-II is overall dark-green with a white KNPOB on the turret sides. I haven't a clue what that means?? A crewman is standing on its fender.

One side panel has a small color repeat of the box art followed by paragraphs in Japanese (the tanks history??) and Tamiya's street address in Shizuoka City, Japan.

The other side panel has 5 scenic color box arts of other AFV kits that Tamiya makes. These scenic box arts are not Tamiya's usual all white background ones.

No kit numbers are provided for these 5.
​WHAT'S IN THE BOX:

The instructions consists of a single sheet that accordion-folds out into 6 pages in 7 1/2" x 11" page format.

Page 1 begins with a black and white repeat of the box art over the history of the KV-II.
Page 2 to page 4 give a grand total of 9 assembly steps.

Page 5 is the painting and decal application instructions, with a 3-view and four turret side illustrations showing different slogans and markings.

Page 6 has a part name list in Japanese, part trees illustrations and a black and white photo of the model made up with no markings on it.

Dark-green letter A parts tree holds: crew figure (divided into separate torso, lower body and arms), fuel tank halves, tow cables etc. (30 parts) 8 parts are shaded out on the parts trees illustrations as being excess and not needed to complete the model. 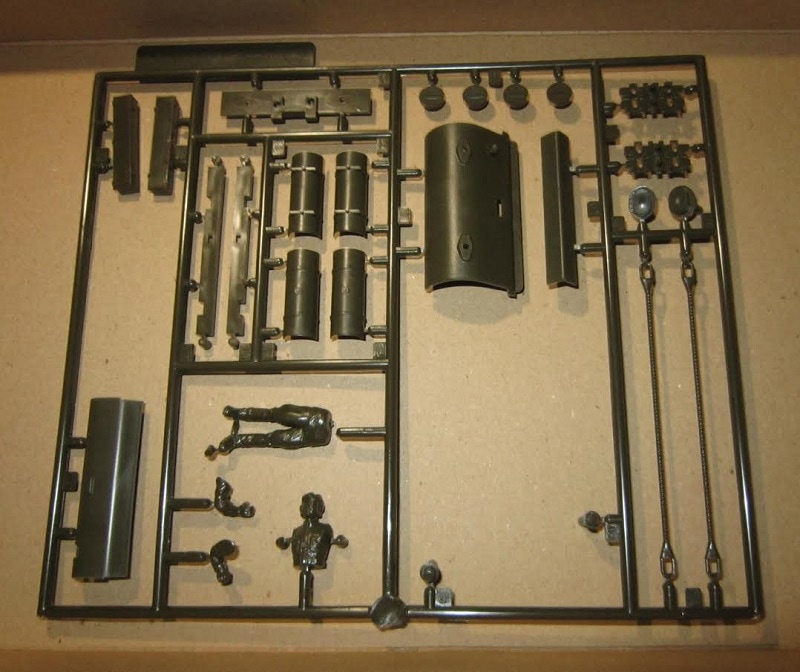 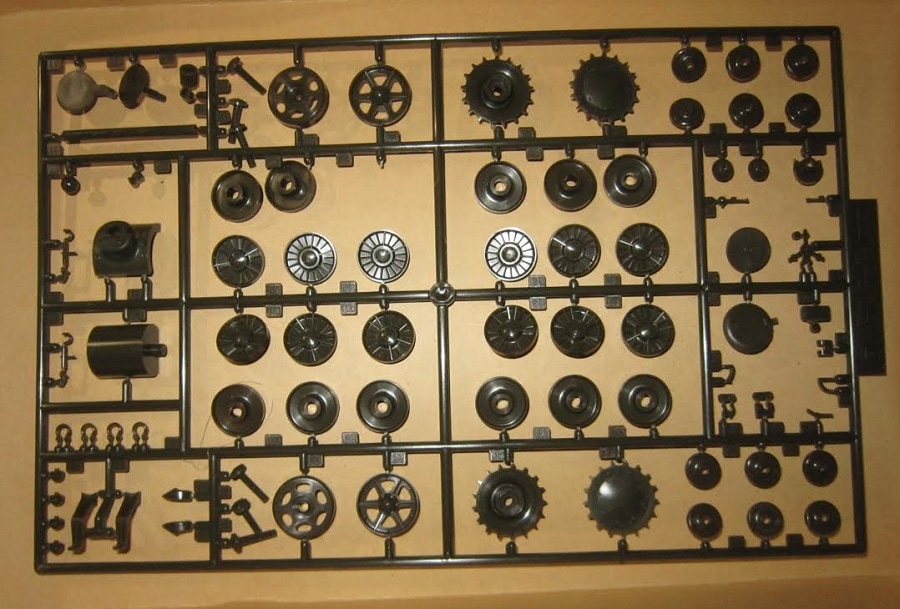 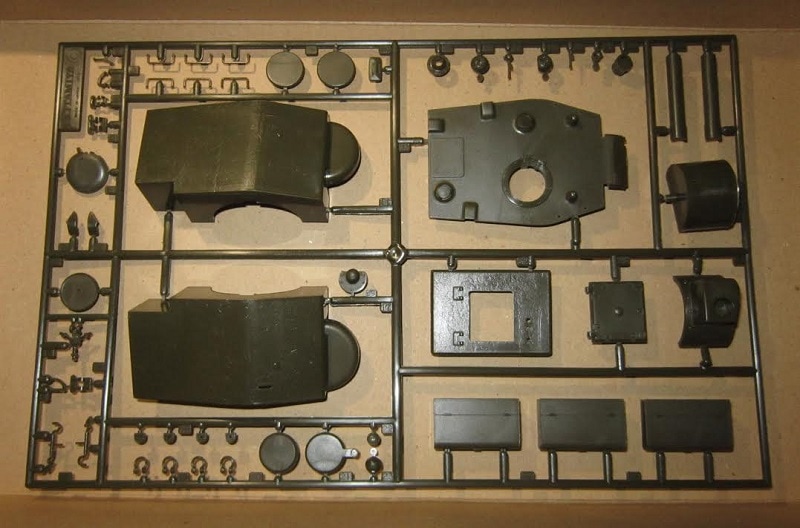 ​There are 2 runs of vinyl rubber-band type tracks. 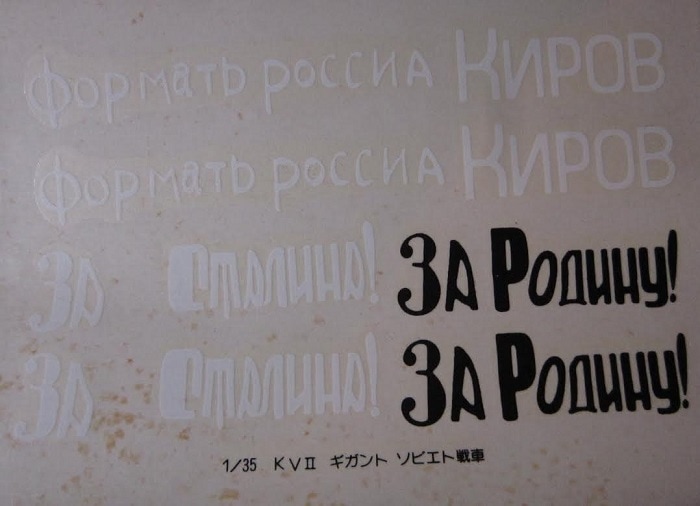 Although some of the external fuel tanks and equipment lockers that go on the fenders are marked as excess on the parts tree illustrations, I am gonna use them to dolly up the fenders more and may even make some rolled tarps out of Kleenex too.
​This is a nice kit externally, but there is no interior detail.

I bought my kit back in the 70's at my local hobby shop.