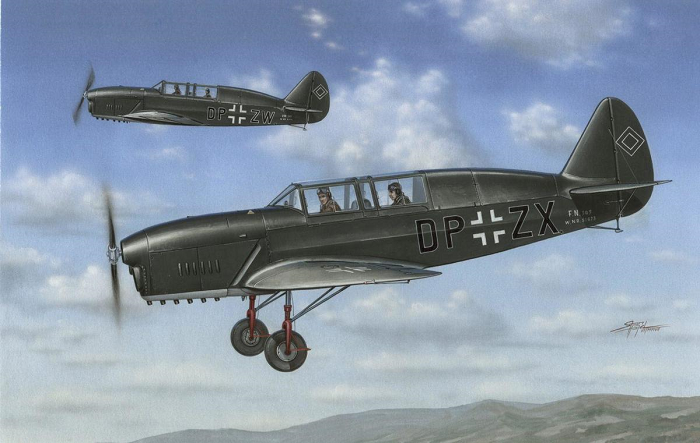 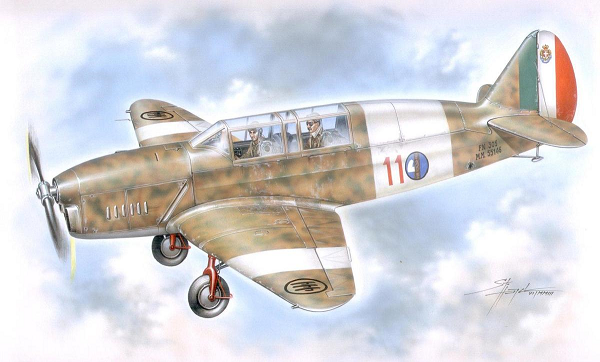 Designed in 1933, the Nardi F.N. 305 was a single-engined tandem-seat monoplane intended as a trainer, touring and sports aircraft. The first F.N. 305's employed by the Regia Aeronautica, in the training role, were powered by the Alfa Romeo 115-I six-cylinder in-line engine, providing 190 horsepower.

The type was unjustifiably considered by traditionalists to be "dangerous", because it was one of the first Italian light aircraft with retractable undercarraige and such novel features as flaps, flaperons and fully-enclosed cockpit. The type did, however, gain acceptance in the course and its attractive lines became a common sight on Regia Aeronatica flying training stations.

A short while before Italy's entry into WWII, she supplied 36 F.N. 305's to the French Armee de l'Air, where they were employed in the fighter training role. Later on, the few French examples remaining were taken over by the Luftwaffe. A small number of single-seat F.N. 305 models were built by Piaggio.

Special Hobby is based in Prague, Czech Republic.

The kit comes in a shrink-wrapped end-opening type box. I am no fan of this type of box, because invariably parts or the decal sheet find their way past one of the end flaps to become lost forever. Give me a tray and lid type box any day of the week.

The box art shows a Nardi F.N. 305 flying above clouds. It is in a base of sand with dark-green and brown mottle above a light-grey undercarraige.

It has wide white bands around the wings and the fuselage. The number 11 in red before a blue circle with facist symbol on it on top of the fuselage band. It has green, white and red vertical bars on the rudder (reading left to right) with the House of Savoy logo on the white bar.
WHAT'S IN THE BOX:

The instructions consists of 4 loose sheets, printed on both sides to create 8 pages in 8 1/2" x 12" page format.

Page 1 begins with a black and white line drawing of the Nardi F.N. 305 over its history in English and Czech.

Page 2 has the parts trees illustrations at the top, over international assembly explanations and a list of Humbrol brand paint colors and the first 3 assembly steps.

Pages 3 & 4 gives a balance of a grand total of 6 assembly steps.

Page 5 has a 4-view of the Nardi that is overall silver with post-war Italian roundels and red, white and green vertical bars on the rudder, with a tiny black no.27 on the white bar.

Page 6 has another 4-view of a Nardi that is overall cream with fascist roundels, red, white and green rudder with the white being a cross shape with the House of Savoy insignia on it. It has a blue circle with a fascist on it on the fuselage sides, followed by a pennant and a black 1.

Page 7 has another 4-view of a Nardi in the box art scheme (already described above).

Page 8 has another 4-view of a Nardi in the 3 color mottle over light-grey undercarriage (like the box art scheme). It has a wide white fuselage band with black 3 on it and a white cross on the rudder with the House of Savoy insignia on it. 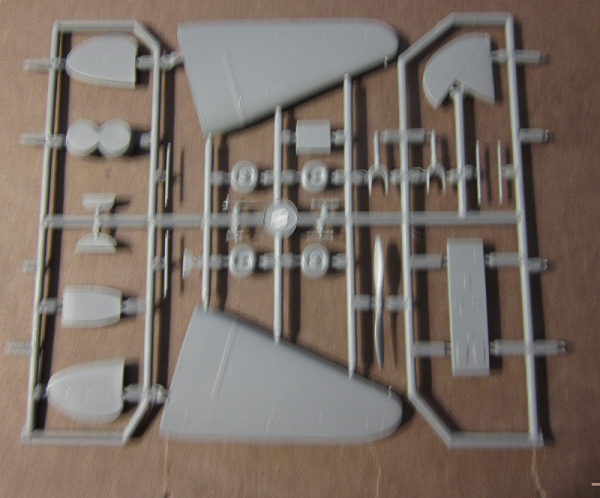 ​Loose medium-grey lower wing half is next. (1 part)

Next are the loose fuselage halves. 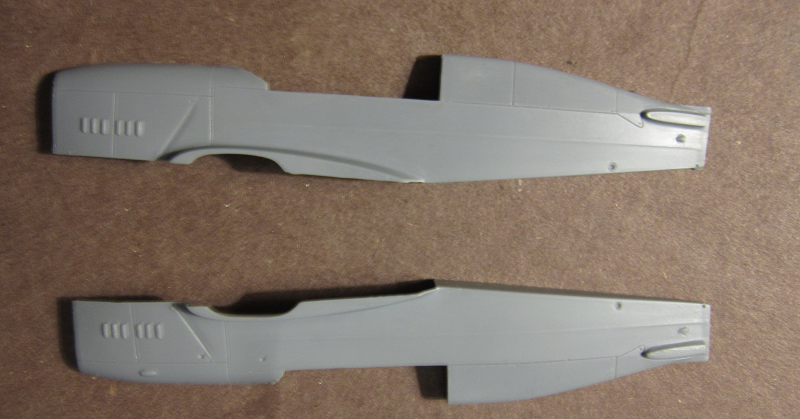 ​The canopy is clear vacuformed.

​Tab resin parts are the seats and fuselage nose (3 parts) 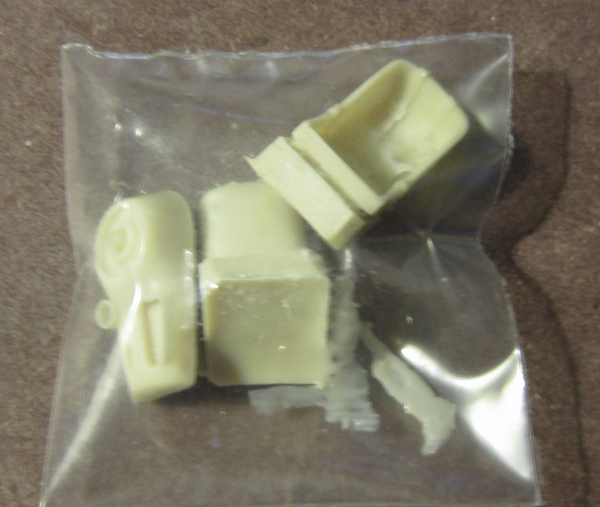 ​A black photo negative has 2 instrument panel dials on it. These get sandwiched behind PE parts. 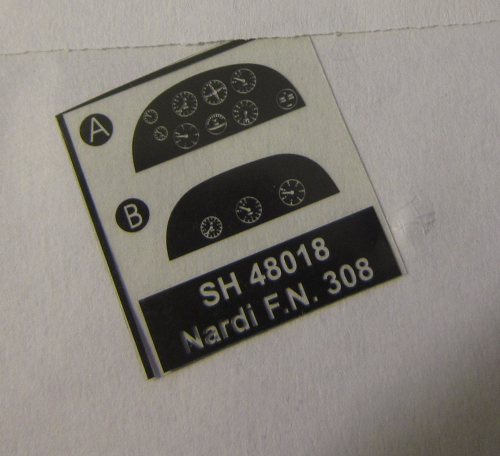 A sheet of German instrument dials is also included in the kit. These are on paper. 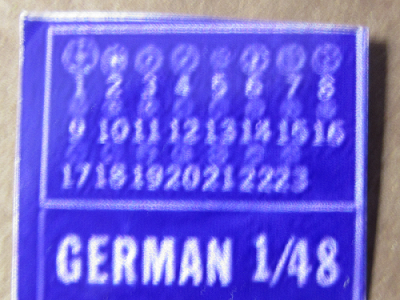 ​The PE fret holds the dash faces and roll over bars etc. (11 parts) 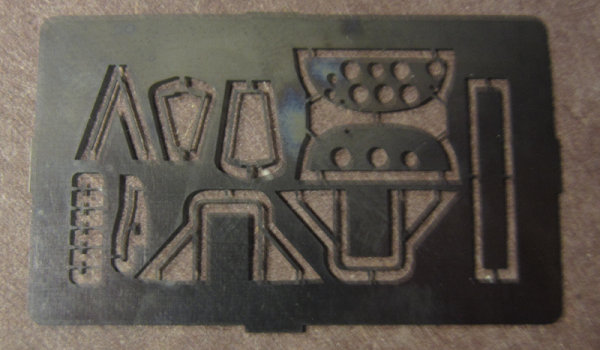 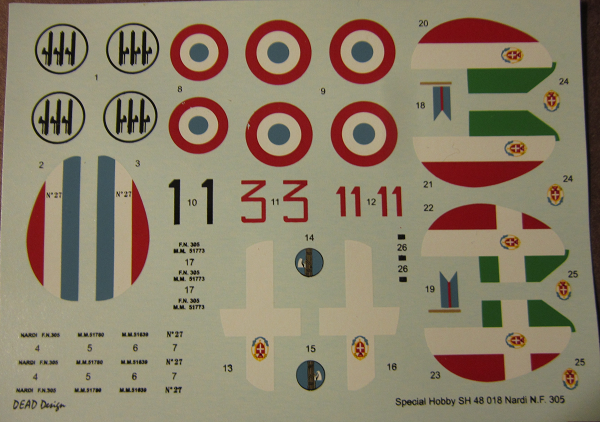 No figures are included. Detail is very nice.